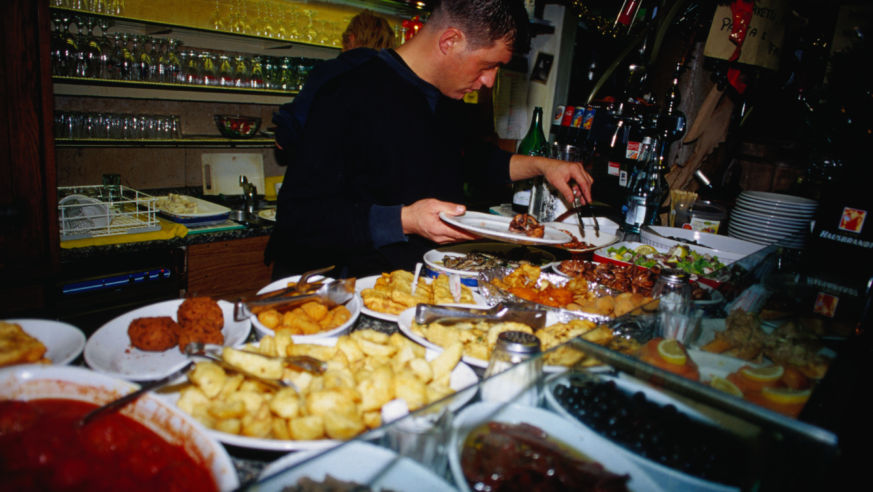 Sure, buffet-style service can be immaculate and delicious, like this Venice antipasto spread. But restaurants' dirtiest secrets may shock you.

Every restaurant has its own, um, special way of doing things. Unfortunately, some of the most common practices, even in average-to-good kitchens, can be shocking. Over the years, Budget Travel has checked in with chefs, waitstaff, and other food pros—sometimes on condition of anonymity—to bring you the lowdown on the dirty business of making diners' dreams come true.

Your mother was right, but not for the reason she thought. Waitstaff confess that the bread in your basket may have been around the block a time or two. Yep. What doesn't get eaten often goes back to the kitchen, then may get dumped into some other unwitting diners' basket, making it a breeding ground for bacteria.

Sure, the inspiring strains of "We Built This City" make you feel like Superman, leading you to order the entire chile shrimp platter all for yourself. But that's exactly why the restaurant is blasting music: It makes you order more food, eat faster, and leave sooner. Forewarned is forearmed: Tune out the music while you're ordering, and enjoy conversation and a moderate eating pace.

3. NEVER BE THE LAST CUSTOMER

Closing time can mean old food, tipsy kitchen and waitstaff, surly service, and some dude may already be mopping the floor.

Yes, this is a broad mandate, but we know you're up to the challenge. Think about it: Your cook, your waiter, and other restaurant workers hold the fate of your evening (first date, engagement, Dad's birthday, best friend's 12 months of sobriety) in their hands. If you have legitimate problems, by all means voice them—courteously. But think twice before sending food back (which, fairly or unfairly, often makes the cook angry with your waiter), telling the bartender that the owner is a friend of yours (fyi, the bartender may hate the owner), or asking questions that reek of stinginess ("Would it be possible for the three of us to share a cup of soup?"). While reports of waitstaff spitting on the food of pesky customers are greatly exaggerated, being not only the best-informed diner but also the nicest will always yield better results.

There is typically a strong correlation between the condition of a restaurant's bathrooms and the cleanliness of its kitchen. Sure, there will be a sign admonishing employees to wash their hands, but is there fresh soap? Is the floor clean? The trashcan in good repair and not overflowing? Red flags in the lavatory mean red flags in the kitchen and you have every right to decline your table and move on.

This is a bit of a shocker to those of us who don't think twice before asking for extra olives, twist of lemon or lime, etc. But it turns out those garnishes may have been sitting in an unrefrigerated bar tray for hours or more. Seasoned restaurant workers suggest that whether you prefer your martini shaken or stirred, ask for no olives. And if you want lemon or lime, ask for a slice on the side and squeeze the juice into your drink yourself.

7. ENJOY YOUR MEAT MEDIUM OR RARE

Wait. What? While the USDA recommends that meat be cooked to a proper internal temperature to avoid potentially harmful bacteria, you may be better off ordering it a bit rare. Turns out cooks confess that they sometimes reserve the oldest meat for customers who prefer it well done—those extra minutes of cooking, not to mention the slightly charred exterior, can mask the tired quality of old meat.

A nice piece of salmon served with rice and asparagus? Great. Pasta tossed with pieces of fish? Danger, Will Robinson! Same goes for seafood soup. As with well-done meat, cooks sometimes mask the flavor of old fish by mixing it with other ingredients—and the practice is more widespread than you might think.

9. DON'T EAT OUT ON HOLIDAYS

Ever take Mom out for what you hoped would be a special Mother's Day brunch only to find that the waitstaff was inattentive, the food was mediocre, and the entire experience underwhelming? Unfortunately, that's what eating out on holidays often means. Especially on days when restaurants are packed—like Valentine's Day and Mother's Day—the pros recommend you cook up a treat at home instead.

Buffets are notoriously unreliable at keeping food at safe temperatures—and you just have to belly up to the table for a minute or two to notice how many hands are touching, or grazing, or hovering over your meal. We love hotel's complimentary breakfast buffets as much as the next traveler, but we suggest that you arrive early and dig into the freshest, untouched stuff on the spread.

If you're a recovering fast-food junkie (guilty), you already know that the plastic trays that your food is served on are absolutely crawling with micro-organisms. If you must order fast food (and we beg you to be a little more adventurous, especially when representing the U.S. abroad), ask for it in a bag, even if you intend to consume it on the premises.

12. MAKE YOUR OWN COFFEE

Ever ended a dinner out with a nice cup of "decaf" only to find yourself tossing and turning all night long? Or did you ask for a big mug of regular and end up falling asleep on the metro? Sorry. Restaurants are notoriously careless with the caffeine vs. regular setup, especially as the night wears on. If you want a jolt of caffeine, order an espresso, which is made cup-by-cup.

13. PACK YOUR OWN LEFTOVERS

Trust us, that time you murmured, "I could have packed this better myself"?—you were right. Waitstaff is busy, cooks can't be bothered, and if you want the right stuff put into the right doggie bag (not to mention clean hands touching your uneaten morsels), don't rely on the busboy. Ask for the package and do it yourself.