Few Americans know foreign cities as well as guidebook authors do, and that's why we turned to Michael Sommers for advice on Rio de Janeiro, one of our picks for the Top Budget Travel Destinations for 2010. Sommers wrote the book on Brazil's famous city for Moon Travel Guides, a series that is especially acclaimed for its Latin American coverage.

Rio de Janeiro makes for a fun tropical escape yearround. On the downside, summer (which is winter in the U.S.) is "high season" so expect high prices to accompany the very high temperatures (think: 100 degrees Fahrenheit) along with humidity that is often exacerbated by torrential rains. Beaches will be mobbed since Cariocas (as the locals call themselves) will be on vacation, but if you want to experience Rio's beach culture to the hilt, you will.

Personally, I prefer the city at other times of year when the climate is more temperate ("winter" temperatures sometimes fall to a still-pleasant 60 degrees), the beaches are less crowded, and you can discover less obvious aspects of the city without the heat and hype.

Danger is a very relative thing. Rio definitely has more potential risks than other cities of its size. Like any city, the key is how to minimize the risks (such as knowing where to go and when). So be sensible without being paranoid. A lot of the scary violence you hear about in Rio goes on in favelas and other areas you wouldn't (and shouldn't) be visiting on your own. The Zona Sul neighborhoods (with all of the famous name beaches you want to visit) are quite well policed and pretty safe during the days and early evenings. Walking in busy areas is fine. But be leery of abandoned areas or streets, and, at night, it's wise to take cabs. Dress fairly simply and discretely, and avoid fumbling for money in public. I'd recommend a money belt and a bag that you can loop around a shoulder. Take only essentials to the beach. And then relax!

"Blending in" is not only a good idea in terms of safety (see above), but will help you feel more at ease and enjoy the city. My first tip would be to hit the beach. Not only will this immediately plunge you into Carioca culture, but a tan will give you that healthy local glow that will dispel that just-off-the-plane look. Try to dress local, which means Havaianas, a biquini (for women) and sunga (for men) for the beach, and some decent jeans and form-fitting t-shirts and tops for elsewhere (sneakers for men, comfortable sandals or platforms for women). Leave the one-piece bathing suits and Speedos at home along with baggy cargo shorts and oversized tees. Cariocas are casual, but not slobby. No matter how native you look, your "tongue" will betray you. Learning some basic Portuguese makes ALL the difference (especially in terms of good will). Surprisingly few people speak (very good) English. Finally, be flexible and don't get stressed. Cariocas respond to charm and humor much more than impatience and aggressiveness.

4. Is Rio expensive, and how can I live it up for less?

To be honest, Rio is not as cheap as it used to be. While the U.S. dollar has taken a serious beating against the Brazilian real, Brazilians' own standard of living has increased in recent years. That said, like any big city, there are tons of fantastic inexpensive and free options that allow you to take advantage of the best that Rio offers. Natural attractions--the beaches and green spaces such as the Floresta de Tijuca, Lagoa Rodrigo de Freitas, and Parque de Flamengo--are all free. All museums often free admission on selected days. To get around, don't be afraid to take buses or the (air-conditioned!) Metro.

In terms of accommodations, come during the off-season, and take advantage of a new outcrop of cheap and charming guesthouses, B&Bs and hostels. Consider staying in non-beach neighborhoods such as Santa Teresa, Flamengo, or Laranjeiras—attractive, historically interesting, and refreshingly untouristy. (For example, Flamengo is connected to the beaches by the city's convenient subway lines and has interesting hotels like Novo Mundo.)

As for food, "per kilo" restaurants allow you to eat as much or as little as you want of whatever you want. Bares de suco (juice bars) serve (filling) fruit juices and vitaminas along with healthy sandwiches while beloved botequins (classic Rio bars) offer home-cooked daily specials and a wealth of delicious appetizers that can easily constitute a meal. Foodies take note: many of the city's finest restaurants offer inexpensive executivo lunch menus during the week.

When most people think of Rio's Carnaval, they conjure up the fabulous floats and flamboyantly (and often scantily) costumed sambistas that parade through the Sambodromo during the desfiles de escolas de samba (samba school parades). This event is truly spectacular. However, be aware that you'll either need to get tickets far in advance (it's possible to do so online) or shell out some big bucks. If money's no object, the private boxes are much more comfortable than the regular bleachers. If money is an object, arrive at the Sambodromo after the parade starts (it'll go on all night) and haggle with scalpers. The best seats are in the central sections.

Many people have a lot more fun joining Rio's blocos and bandas. Consisting of neighborhood residents and merrymakers who (costumed or not) take to the streets to sing, samba, and have an awful lot of fun, this traditional street Carnaval is enjoying a major revival. It costs nothing and allows you to bond with Cariocas of all stripes.

Finally, even if you miss Carnaval itself, you can get a taste of it beforehand. Rio's samba schools hold weekly rehearsals at their headquarters (beginning in October) while blocos and bandas often hold theirs in front of neighborhood bars that double as unofficial club houses (usually in the weeks before Carnaval). Rehearsals inevitably turn into informal street parties and, once again, offer great opportunities to interact with Cariocas.

Budget Travel's Exit Interview: Just Back From... the Beaches of Rio 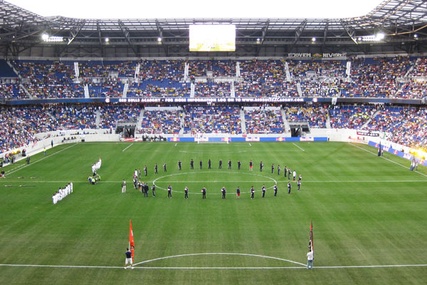 After 14 seasons relegated to playing on artificial turf at 82,000-seat Giants Stadium, the New York Red Bulls took to the grass at their impressive new home, Red Bull Arena, for an opening exhibition game last Saturday. It was a gloriously sunny, 70-degree day and felt like an exhilarating new beginning: the team, which struggled last year, came away with a 3-1 win over Brazilian club team FC Santos, where the legendary Pel&eacute; once played. I was among the sold-out crowd of 25,000, which included the kind of hardcore fans you'd expect at a foreign soccer match. The Red Bulls supporters chanted throughout, waving flags, banging instruments, and getting everyone stomping on the aluminum stands and doing the wave. Built to be fan-friendly, the intimate arena puts spectators right near the players; the front row is only 21 feet from the sidelines, with a low dividing wall. It's also more accessible than Giants Stadium&mdash;just a few blocks from the Harrison, N.J., PATH station (the PATH train connects northern N.J. and Manhattan, $1.75 per ride). The Red Bulls will take on Chicago Fire next in their first MLS season game this Saturday, tickets from $22. With team captain Juan Pablo Angel calling it "the best stadium in the country," and a Sports Illustrated soccer columnist in "breathless" agreement, could Red Bull Arena finally kick start professional soccer's popularity here?

Want to visit Paris without leaving your desk? The largest assembled panoramic image in the world was just published online, and Paris is its subject. The Paris 26 Gigapixles project presents an image of the city made up of 2,346 individual photos. These were shot in September 2009, then stitched together to create a composite image of 26 gigapixels (a gigapixel is one billion pixels). The website presentation of this project is truly something to behold, but beware: you can lose an entire afternoon zooming around the online image. The site highlights the "20 most beautiful monuments in Paris" and allows viewers to zoom in so close that they can make see the frightening grimace on an individual gargoyle at Notre Dame. Information bubbles for each of these monuments allow viewers to learn a bit of history, too.

This morning, Budget Travel's Editor in Chief Nina Willdorf sat down with Kathie Lee and Hoda on NBC's The Today Show to share five dream trips you can take on a budget. Take a look: Visit msnbc.com for breaking news, world news, and news about the economy

Renew it: Passport Day is this Saturday

This Saturday, March 27, is Passport Day. Nationwide, 23 passport offices will be open Saturday for extended hours. Plus, you won't need an appointment to apply for or renew a passport. Additionally, other facilities will be participating&mdash;city halls, post offices, and more. To see the nearest event in your state, check out the government's website or call the National Passport Information Center at 877/487-2778. If you promised yourself this was the year you were going to take care of your passport, do it on Saturday. As we reported last month, the fees could get more expensive very soon. Who knows, there might even be balloons and stuff&mdash;some of the participating institutions are calling this a "Passport Fair." We'll celebrate anything that makes travel easier, so cheers!