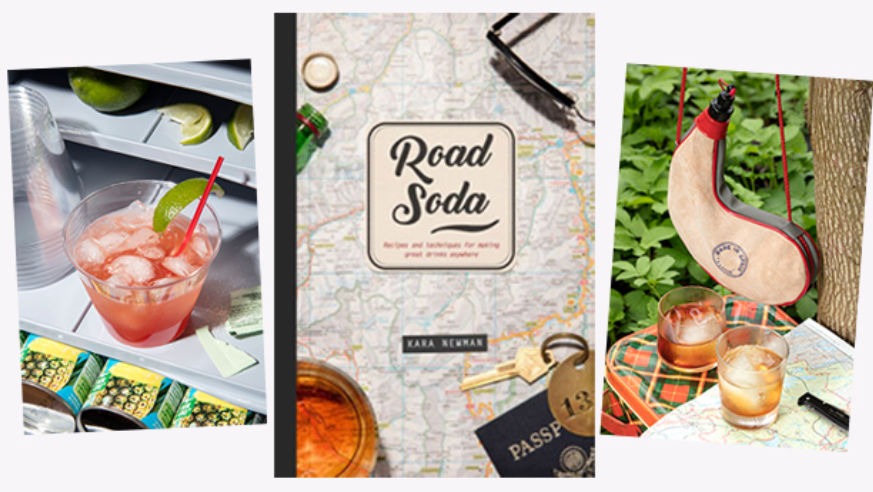 Author Kara Newman spoke with bartenders across the country to craft a compendium of cocktail techniques, hacks, and easy recipes.

It’s happened to the best of us: you end up in a hotel room or on a plane or at a campsite and you’ve spent what seems like an entire day getting there. A cocktail would be really nice at that point, but you don’t want to take out a mortgage on your home to buy the micro-bottles from your minibar and a gin and tonic from a harried flight attendant just won’t do the trick. In this situation, the trick is resourcefulness. In “Road Soda,” Kara Newman, spirits editor for Wine Enthusiast Magazine, talks to bartenders around the country to create a compendium of clever techniques, practical hacks, and surprisingly simple recipes that can ensure a well-made cocktail is never as far away as your destination. We sat down with her to talk about "Road Soda" (one of Budget Travel's "Holiday Gifts for Cocktail Enthusiasts"), fancy ice, Ziploc bags, and how to make a cocktail at 39,000 feet.

YOUR HOTEL MINI FRIDGE HAS MORE COCKTAIL INGREDIENTS THAN YOU THINK

BUDGET TRAVEL: You note in your book that an epic delay in Mexico while you were en route home to New York helped kicked this book into gear. What happened there?

KARA NEWMAN: It was a ten hour flight delay and I was with some colleagues who suggested we grab a hotel room so we could rest, work, refresh. All I had was my carryon, which included a bottle of tequila, so I grabbed armfuls of Squirt, the grapefruit soda that’s mixed with tequila in Mexico to make palomas, and the weirdest corn chip flavors I could find. I called everyone and said, ‘Paloma party in my room!’ I was in a foul mood, and it made me feel more civilized. The delay was less like a chore and little more like an adventure. It’s this kind of attitude adjustment that I hope people are able to take away.

BT: In all your conversations with bartenders, was there anything you learned that particularly surprised you?

KARA: I was really surprised by Julie Reiner’s [owner of NYC’s legendary Clover Club and Flatiron Lounge] machinations to bring an entire daiquiri on board a plane—fancy ice and all. It came my way through social media, someone posted a photo on Facebook of Julie shaking daiquiris onboard a flight to Hawaii. She told me she brings all the ingredients and, of course, purchases the rum on board. She had a cooler of dense Kold Draft ice—the kind serious bartenders like to use because it doesn’t dilute quickly—and her own shaker. It surprised me that she’d be so willing to go to these lengths to have that kind of experience on board. She was even considerate by wrapping cocktail shaker in a blanket. She was in first class, so she had some elbow room and wasn’t knocking into neighbors if she’s shaking. You have to know your constraints.

BT: Knowing your constraints seems like good advice for anything in life.

KARA: I was also amazed by Atlanta bartender Tiffanie Barriere’s suggestion to use a scooped-out half lemon or lime as a jigger. It’s a watertight vessel, nature’s nifty jigger. It never even occurred to me as a possibility, but it works. It’s so crazy. It won’t always be precise ounce or half-ounce, but if you use it every time you’ll get the right proportions. I also liked that another acclaimed New York bartender Pam Wiznitzer gave me her mom’s tip to pack arm-floaties—those things kids use to learn how to swim—to keep bottles safe while you travel. Pack them deflated and blow them up and stick a bottle in it. Insta-packaging!

PLANES, TRAINS, BEACHES, AND CAMPSITES: THERE'S A DRINK FOR THAT

BT: Your book is organized in chapters. I really enjoyed the one about how to make the most of your hotel mini-bar, but I was struck by the three chapters that each focus on a specific vessel--flasks, bottles and cans, bags. Some of that would never occur to me—like plastic bags??!

KARA: I was amazed by how many drinks could be made in bags. That was a shocker. I can’t believe I did an entire chapter on drinks in Ziploc baggies and Capri-Sun pouches. But it’s just really nice to have an alternative to a glass if you’re going to a beach. And as for bottles, that’s great when you don’t have a shaker. Then a lot of bartenders seemed to be into hiking and outdoor sports. Among bartenders who like to climb mountains, I had a lot of conversations about flasks and packing metal or plastic instead of glassware. There are practical reasons for taking drinks in flasks or Bota bag.

BT: “Road soda,” you note, is actually a traditional term for an alcoholic drink consumed in a vehicle. (Presumably not by the driver!!) How’d you uncover that history?

KARA: I was at a cocktail conference in San Antonio and touring through the Anthony Hotel, a historic, luxurious hotel built in 1909. Outside there was a place where cars pulled up and handed their “roadie,” a drink to take on the road.

BT: Wow, times sure have changed.

KARA: I was astonished. Who’d do that now?? It sounds so luxurious, in a way. Of course, I am NOT encouraging drivers to drink. Far from it!!

BT: I realize it’s hard to pick favorites, but….what's your favorite cocktail from the book?

KARA: I’ve been digging the ones in flasks. When I want to take something with me, I’ll take the Pendergast (bourbon, sweet vermouth, Benedictine, Angostura bitters) or the Rebanack (rye, orange curacao, Strega liqueur, Peychaud's bitters). They’re nice easy sippers that are especially good when you want to just show what the whole idea is about. Plus they’re in easy-to-pour in containers, so they're easy to share.

We asked Kara to pick a few drinks from her book and recommend a trip to match. Here are her suggestions.

FOR HIKING, CAMPING and MOTEL-HOPPING: Under My Skin (makes 10 drinks)

Funnel all ingredients into a 1-liter bota bag or bottle and shake gently to combine. To serve, pour into rocks glasses, each with one large ice cube, using 3 ounces of cocktail per serving.

FOR CONCERT-GOING, OR ANY CROWD-HEAVY OUTING: Rebennack (makes 1 drink)

Funnel all the ingredients into a flask and cap tightly.

In a small cup, stir the sugar and water together until sugar dissolves to form a simple syrup. Fill a large plastic cup halfway with ice, then add the rum, Campari, pineapple juice, and simple syrup. Squeeze in the juice from 2 of the lime wedges and stir until chilled. Pull the peel off the remaining lime wedge and use as garnish.