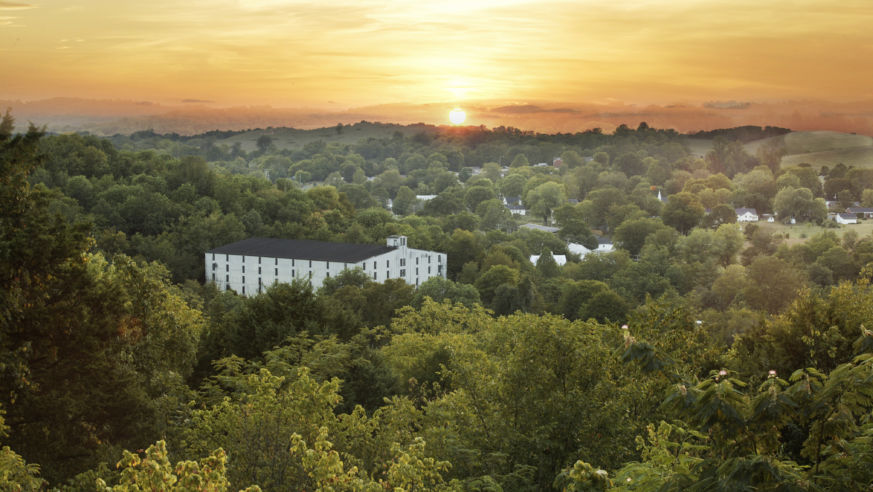 There's no better guide to a region than someone who lives there, so we asked Jeff Arnett, Master Distiller at Jack Daniel's, for his take on where to eat, drink, drive, and wander in the small towns surrounding Lynchburg, the Tennessee whiskey capital.

America is summed up by many things: Baseball, mom and apple pie; stars and stripes; rock and roll; and, of course, the countless brands of food and drink that started ages ago and are familiar now as they were then. (Think: Hershey’s, Kellogg’s, Coca Cola, and so on.) Not least among them is Jack Daniel’s, the now iconic Tennessee whiskey that was founded in Lynchburg, Tennessee, in the south-central part of the state, in 1875. The distillery and the live old-timey, down-to-earth vibe of Lynchburg have made the town a celebrated tourist attraction, but if you’re among the 275,000 or so people who head there annually, it’s worth tacking on an extra day or two to explore the surrounding area. We caught up with Jeff Arnett, master distiller at Jack Daniel’s, who tipped us off on what to see, eat and do in the area's various small towns, each its own unique portrait of America.

TULLAHOMA IS FOR FOODIES

Thirteen miles northeast of Lynchburg, Tullahoma sits adjacent to Arnold Air Force Base, home to the world’s largest wind tunnel where most US military aircrafts are tested. But the area’s military history is even more intriguing, as it was the site of Camp Forest, where German and Italian POWs were taken during World War II; General Patton trained troops on the grounds between here and Lynchburg. Against that historic backdrop today is a rejuvenated downtown, home to restaurants, like One 22 West, which is located in a former department store. It’s been serving locally minded classic American fare since 1997. The lively bar puts a premium on local beer and spirits, so you better believe that means plenty of Jack Daniel’s to go around. Another spot Jeff recommends for good eats is Emil's Bistro, a longstanding cottage-style restaurant with a long oak bar for classy yet casual meals. It's right next door to the Grand Lux, a homey inn in a refurbished old house, which comes highly recommended by Arnett if you're looking to spend the night in the area.

And if you’re a nature lover, then stay you should. Tullahoma’s Rutledge Falls, a tucked-away 40-foot waterfall is a destination for hikes, nature walks and swimming. Short Springs, a mere three miles northeast from Tullahoma, is a 420-acre landscape where the vibrant wildflower blossoms are said to be the best in the state. Its biodiversity is mind-boggling (think: springs, waterfalls, forest, ravines.) There are the natural wonders that are easy to find, like Machine Falls, which has a 60-foot cascade, as well as the hidden gems that Jeff is partial to, like various pop-up springs.

But perhaps the town is most widely known by aviation enthusiasts who make pilgrimages here to see the Beechcraft Heritage Museum, which boasts an unparalleled collection of vintage aircrafts and aviation curios. Jeff notes that once a year, people who own staggerwings, those quaint, if rickety-looking planes that ruled the skies in the 1930s, fly to Tullahoma from all over the U.S. for a competition, of sorts. "It’s truly amazing how many people get into it," he says.

SHELBYVILLE IS FOR EQUESTRIANS

Louisville has the Derby, Boston has its marathon, and Park City has the Sundance Film Festival, but Shelbyville, about 70 miles south of Nashville and 16 miles north of Lynchburg, becomes a destination every August for a very particular kind of equestrian showcase. Once known as the Pencil City for its role in pencil manufacturing, today it’s the Walking Horse Capital of the World and hosts the Tennessee Walking Horse National Celebration each August. The event is an opportunity to witness horses move like they’re up on their back legs, shunning the laws of nature and physics. As they kick and flail their front legs, the rider manages to look like he’s hardly moving. “It’s like they’re on a magic carpet,” Jeff explains. “The horse puts on quite a show.”

FAYETTEVILLE IS FOR TIME TRAVELERS

Fifteen miles west of Shelbyville is Fayettville, the county seat of Lincoln county, which means it boasts a beautiful old courthouse square, complete with official Main Street District designation and an historic theater. Going into the Lincoln Theater “is like going back in time,” Jeff says, even though they play the latest film releases. Much of the décor, like the lush velvet curtains, are kept in good repair. While you’re in a vintage frame of mind, you can swing by one of the several antique stores in the area or at the Antique Mall that's located on the Square. The sprawling emporium, located in an historic building, features furniture, art, jewelry, home goods, It’s not all time capsules, though. The old town jail has been transformed into a homey restaurant called Cahoots, which dishes out familiar pub grub. There’s also Honey’s, a country diner-style joint, complete with a counter overlooking the stoves, that Jeff is partial to. He advises—rather, insists—on ordering the slaw burger, which involves a mustard- and vinegar-heavy slaw. “Everyone always argues that they make the best barbecue. In Tennessee, it’s mostly pulled pork and it’s known to have vinegar-based sauces. This burger concoction morphed from the slaw that people were putting on pulled pork,” he explains. “So catch a movie, shop for antiques, and grab a burger and I’d say you made a good day of Fayetteville.”

Winchester, which 20 miles southeast of Lynchburg, is also a county seat, so, like Fayetteville, it boasts a lovely court square. Businesses around the square have a distinctly old-world charm, The Oldham Theatre, which first opened in 1950, plays new releases in a vintage setting; John T’s BBQ is a barbecue restaurant retrofitted into an old furniture store with brick walls and wood panel walls. The eatery’s own furniture, like tables with receipts from the old shop displayed under glass, pays homage to that past. But at its core, Winchester is a quaint lakeside town with lots of enticements for outdoorsy types. (Trout fishing, anyone?) Arnett has a lake house here, so he’s well acquainted to its many virtues, the crystal-clear water of the rocky-bottom Tims Ford Lake not least among them. Part of the Tennessee Valley Authority, it’s a 20 to 25-mile ride from one end to the other and its many channels lend themselves to lots of exploration in any number of kinda of boats. (Rent one at one of the three marinas.) The town claims one of the more unusually situated restaurants in the region: To reach Bluegrill Grill requires walking across the single gangway that connects it to land. Makes sense, then, that many approach by boat. Its hours are seasonal. Back on land you find a state park with 20 modern cabins and Bear Trace, a Jack Nicklaus-designed golf course.