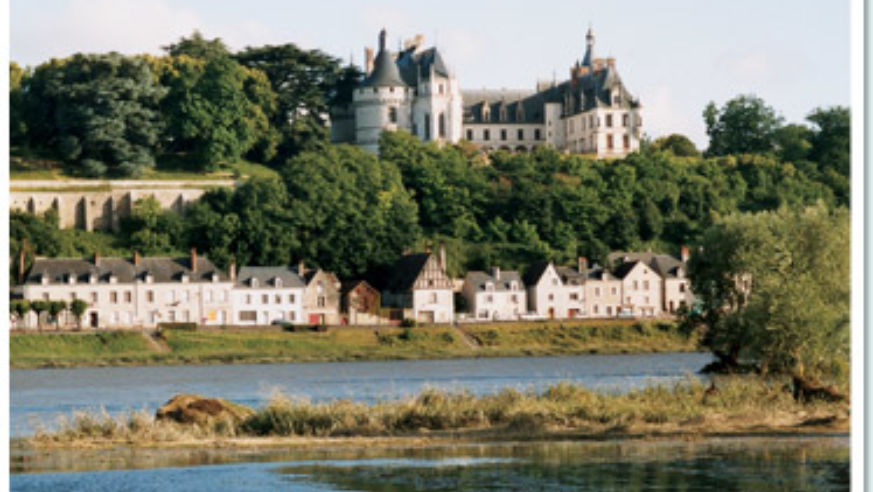 Just a two-hour detour from Paris, the Loire was once a playground to Renaissance royals. Now its vaunted ch&acirc;teaux are attracting enterprising young couples and artists who have remade them into captivating&mdash;and surprisingly affordable&mdash;inns.

CHINON
Hôtel Diderot
"If you've never eaten a brioche with fresh Ste. Maure goat cheese, honey, and walnuts for breakfast, then you haven't been to the Loire," says Laurent Dutheil, who is justifiably proud of the simple breakfasts he serves at his 23-room hotel in the western corner of the valley. Dutheil also produces dozens of fragrant artisanal jams such as apple-lavender and quince-cinnamon. (Sadly, they aren't for sale, but you can buy Dutheil's recipe book, Jam in the Cupboard.) The traditional foods fit well with the hotel's venerable atmosphere: Diderot is housed in a sprawling 15th-century home that the Chinon-born Dutheil, along with his two sisters, Martine and Francoise, bought and renovated six years ago. Dutheil tackled structural issues, taking care to keep the exposed oak beams and original stone walls intact, while his sisters refurbished the rooms with cheerful striped wallpaper, toile bedding, and 19th-century armoires they scavenged on trips to Paris. The largest room, which sleeps four, has double windows with views of a courtyard. In the distance lie vineyards full of the red Chinon grapes much loved by 16th-century novelist and satirist François Rabelais. 4 rue de Buffon, 011-33/2-47-93-18-87, hoteldiderot.com, rooms from $72.
PHOTOS1 of 3

THÉSÉE
Le Moulin de la Renne
A tunnel of towering fir trees leads to the entrance of this converted 19th-century mill in Thésée, on the banks of the Cher River. Guests are greeted by an enormous Bernese mountain dog named Alpha and his equally friendly owners, Véronique and Christophe Villanfin. There are 13 guest rooms, decorated with items such as embroidered quilts and framed puzzles of boats assembled by jigsaw fanatic Véronique. Jazz enthusiasts, the Villanfins host occasional concerts featuring local groups, including Les Bras'Coeurs, a quartet that performs Georges Brassens standards. The soirees are held in the restaurant, known locally for its coq au vin: rooster stewed in cabernet bottled at Le Chai des Varennes winery next door. 11 route de Vierzon, 011-33/2-54-71-41-56, moulindelarenne.com, closed Jan. 10–Feb. 10 and 10 days in Nov., rooms from $76, entrées from $15.75.
PHOTOS1 of 4

CIVRAY-DE-TOURAINE
Château de l'Isle
The Château de l'Isle is quiet to the core—unless you count the chorus of quacks coming from the duck pond on the 35-acre grounds. The 18th-century manor house had been abandoned for 10 years when Denis Gandon bought it in 1986 and transformed the place into a 12-room hotel. Still, the château somehow feels like a private home: A portrait of Gandon's grandfather hangs over a 100-year-old antique table in the dining area, and an amiable Jack Russell terrier entertains guests with endless rounds of fetch. The stylish bedrooms have exposed wood beams and beds draped with coverlets in shades of crimson and marigold. In the summer, breakfast is served in an expansive glassed-in terrace overlooking the garden. A nearby potager (or kitchen garden) supplies produce for some of chef Fabrice Cherioux's breakfast treats, such as a zesty tomato confiture. 1 rue de l'Ecluse, 011-33/2-47-23-63-60, chateau-de-lisle.com, rooms from $69, breakfast $13.
PHOTOS1 of 4

CHENONCEAUX
La Roseraie
This 18-room hotel in Chenonceaux was a must-stay on the itineraries of political notables after World War II, when the Allies were trying to figure out how to piece Europe back together. Winston Churchill, Harry Truman, and Eleanor Roosevelt all, at one time or another, laid their heads at La Roseraie. (A letter from Roosevelt still hangs in the breakfast room.) In 2000, Sophie and Laurent Fiorito acquired the property and completed a top-to-bottom renovation. There is no such thing as a standard room here—tiny singles have just enough space for a twin bed, while one suite fits a family of five. The decor is equally varied. One room has a Louis Philippe-style dresser and a crystal chandelier; another shows off a modern pink-checkered sofa. The hotel's best asset is its proximity (a five-minute walk) to Château de Chenonceau, which Henri II gave to his beloved mistress, Diane de Poitiers; the massive 16th-century building hovers over the River Cher. 7 rue du Docteur Bretonneau, 011-33/2-47-23-90-09, hotel-chenonceau.com, closed Nov.–Jan. and Mar., rooms from $85.
PHOTOS1 of 2

AMBOISE
Le Clos d'Amboise
Surrounded by 10-foot-high limestone walls, in the heart of the old market center of Amboise, this 17-room mansion inn offers an unexpected sanctuary from the town's bustling, narrow streets. The bedrooms come equipped with decorative elements such as mahogany four-poster beds and original fireplaces, while the common room features wood floors modeled after those at the Palace of Versailles. Most of the rooms overlook the hotel's private park, landscaped with 100-year-old magnolias and a pine tree that survived the French Revolution. A pool by the rose garden is perfect for a cool dip after relaxing in the wood sauna, housed in a former stable. Just a 10-minute stroll from the hotel stands the riverside castle that belonged to King François I—part medieval fortress, part Renaissance royal house. The king became famously enthralled by Leonardo da Vinci during a 1515 excursion to Italy, and he set up the painter in a gabled redbrick château (now a museum), just down the road from his castle. 27 rue Rabelais, 011-33/2-47-30-10-20, leclosamboise.com, closed Dec.–Jan., rooms from $98.
PHOTOS1 of 4

LIMERAY
Auberge de Launay
Between the two of them, François and Hélène Thévard have honed their hospitality skills at some of the world's most well-respected hotels, including Le Meurice in Paris and the Savoy in London. After years helping manage other people's properties, the couple—with their two small kids, Emma and Alexandre—packed up their Paris apartment and bought an unassuming farmhouse in the secluded hamlet of Limeray to convert to a 15-room inn. "I grew up in the region, so when we made the decision to open our own place, I knew that I had to come back to the Loire," says François. In keeping with the spare design of the house, the decor at the Auberge is simple—bedrooms are outfitted with neutral suede sofas, blond-wood floors, and minimalist photographs of daisies and landscapes. The duo oversees the daily lunch and dinner service at the on-site restaurant, which serves local specialties such as butter-poached Loire eel, and chicken with mustard cream. The house dessert, a salted-caramel fruit tart, is baked with apples picked in the hotel's orchard. Le Haut Chantier, 011-33/2-47-30-16-82, aubergedelaunay.com, closed Dec. 15–Jan. 15, rooms from $72, two-course dinner from $26.
PHOTOS1 of 2

ONZAIN
Château des Tertres
This mansion in the heart of the Loire once belonged to the mother of novelist Marguerite Duras (who mentions the château in her famous work The Lover). Later, in the 1960s, its marble hallways were filled with students from a nearby engineering school, which used the building as a dorm. In 1992, another curious owner took over management of the 14-room château: Bernard Valois, an artist who kept the mansion's 19th-century detailing (high ceilings, gilded mirrors) but added contemporary design flourishes, such as a photograph of a mysterious pair of eyes in the foyer. Last year, Valois and his wife, Christine, redecorated a former gatekeeper's house as a contemporary four-room cottage with knockoff Jackson Pollock paintings and sculptures that resemble enormous eggs. "My husband likes to turn things that seem ordinary into the extraordinary," Christine says. "He designed a 'Sputnik' bidet that has Japanese robots stationed around the tank." Valois also tends a 12-acre garden of roses and clematises, where guests can find a shed stocked with complimentary bikes for exploring the area's 186 miles of riding paths. 11 rue de Meuves, 011-33/2-54-20-83-88, chateau-tertres.com, closed Oct. 19–Apr. 1, rooms from $94.
PHOTOS1 of 3

CHITENAY
Auberge du Centre
When Gilles Martinet's grandmother found herself widowed at the end of World War I, she started selling milk and eggs to make ends meet. One thing led to another, and her home eventually became a guesthouse and restaurant specializing in French country fare, like chicken sautéed in fresh cider. Three generations later, Martinet is now proprietor and chef of this inn, which has 26 brightly decorated rooms in shades of sage and rose, as well as a flower-filled garden terrace out back. He has kept the breakfast area much the way his grandmother designed it, with rustic stone walls, an ample fireplace, and simple country furnishings. There are bicycles available to rent ($14.50 per day) for excursions to the Château de Cheverny, about five miles away. 34 Grande Rue, 011-33/2-54-70-42-11, auberge-du-centre.com, closed Feb., rooms from $78, entrées from $17.
PHOTOS1 of 3

Loire Basics
A two-hour drive southwest of Paris, the Loire Valley is known for its earthy cabernet francs and hundreds of majestic castles. It's impossible to see them all (a visit to one château can take half a day), so it's wise to focus on the worthy ones: Chenonceau, the graceful riverine palace that once belonged to Henri II (chenonceau.com, $13); Chambord, which has a double-helix staircase inspired by the designs of Leonardo da Vinci (chambord.org, $12.50); and Cheverny, renowned for its flamboyant, gilded interiors (chateau-cheverny.com, $9.75).