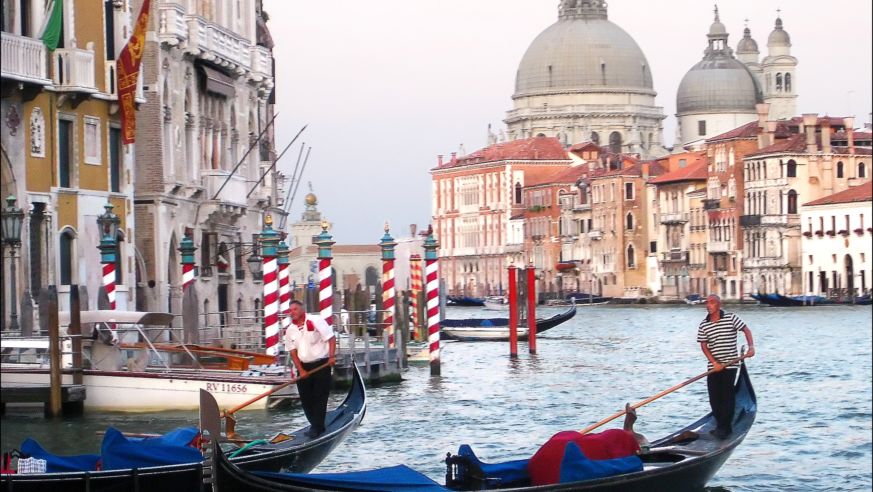 Venice is one of Europe's "Shoulder Season" bargains, with fewer crowds, great weather, and lower prices in fall!

"Shoulder Season" is the time in between high and low seasons. Europe's high season, of course, is summer—the kids are out of school, you want to soak up, say, that Italian sun, but you've got to pay a premium for it. Winter, on the other hand, is Europe's low season—rain, fog, and possibly knee-high water in Venice. But in the fall, the crowds depart Europe for school and work, the weather cools to a comfy mid-50s in Dublin, mid- to upper-60s in Venice, low 70s in Barcelona, and at Budget Travel we love to watch those prices go down!

I know what you're thinking: Isn't airfare to Europe always high? It doesn't have to be. I've got a secret about airfares and hotel rooms. Airlines are willing to sell their seats at a huge discount, practically giving them away—even to Europe—and hotels want their rooms filled even if they have to steeply trim their prices. But they don't exactly want you to know how low they're willing to go, so they package them along with meals, guided tours, and sometimes rental cars into package deals. In our Real Deals department, we work with the world's finest tour companies to bring you unbeatable deals to your dream destinations in Europe (and everywhere else).

Dublin. Affordable, friendly, and second-to-none in big-city culture and natural beauty. Start your Ireland adventure in Dublin to see beautiful Trinity College, where you can ogle the illuminated manuscript known as the Book of Kells, drink in St. Stephen's Green and Phoenix Park (which has a zoo), and then Riverdance on over to the Guinness Storehouse, which is basically Disneyland for grownups, to drink in—literally—another side of Dublin. Historic Temple Bar is another great place to tip a pint. And since one in nine American is of Irish descent, including President Obama, some like to do a little genealogy research here to see where their family came from. Then get out into the countryside. It's a great place for driving, and you shouldn't miss Connemara, Galway, and other beautiful spots. Dublin boasts some of the most affordable hotels in Europe, and we like the Harrington Hotel, starting at $91. For a great package deal to Ireland, visit aerlingusvacationstore.com.

Barcelona. Party central for kids and grownups-and all for the same reason! It's just a high-energy city that looks like a fairytale thanks to its imaginative architecture. Visit the Sagrada Familia Cathecdral designed by Gaudi and La Rambla, a major avenue where you'll get a taste of Barcelona's exuberant culture and shopping. Barcelona is also home to tapas, which basically means your dinner is made up of endless appetizers. What's not to love? Stay at the Chic & Basic Ramblas, which looks way cooler than its name and has rooms for $141. Or, for a great package deal to Barcelona, visit friendlyplanet.com.

Venice. Yes, you CAN afford the city of canals! Visit the must-see Piazza San Marco and Basilica (a tourist trap that's totally worth the trip), take an iconic gondola ride, and then veer from the ancient to the modern at the Peggy Guggenheim Collection with its Picassos and Pollocks, but take it from me, don't miss the chance to just wander, and even get lost on the winding streets. You're never far from a familiar landmark to lead you back to your hotel. We love Al Ponte Mocenigo, with rooms starting at $115. For great package deals to Venice and other Italian cities, visit greatvaluevacations.com.

Bucharest. Be the first to brag that you've been to Romania. This Eastern European country is definitely ready to be discovered by travelers. The city of Bucharest has a gorgeous Palace of Parliament and a National History Museum that is surprisingly full of Roman artifacts—and explains the importance of the Roman Empire to Romania's history. When you get out of the city and into the Carpathian Mountains, you will see some truly spooky sites, including Dracula's Castle. The connection to the fictional vampire is slim, but Romania is where myths such as vampires and werewolves first took hold. You can even book a Transylvania Tour! In Bucharest, we like the Radisson Blu Bucharest starting at $131. For a great package deal in Romania (not including airfare) visit intrepidtravel.com.

Turkey. Istanbul is the world's no. 1 destination, according to research from TripAdvisor. The only city that straddles two continents, Europe and Asia, is a great coming together of eastern and western cultures, food, and music. Visit the Aya Sofya (a cathedral turned into a mosque) and some of the world's best Greek and Roman ruins. But get out of town too, to see the incredible jagged mountains of Cappadocia. In Istanbul, stay at Ascot Hotel, with rooms from $118. For a great package deal to Turkey, visit smartours.com.