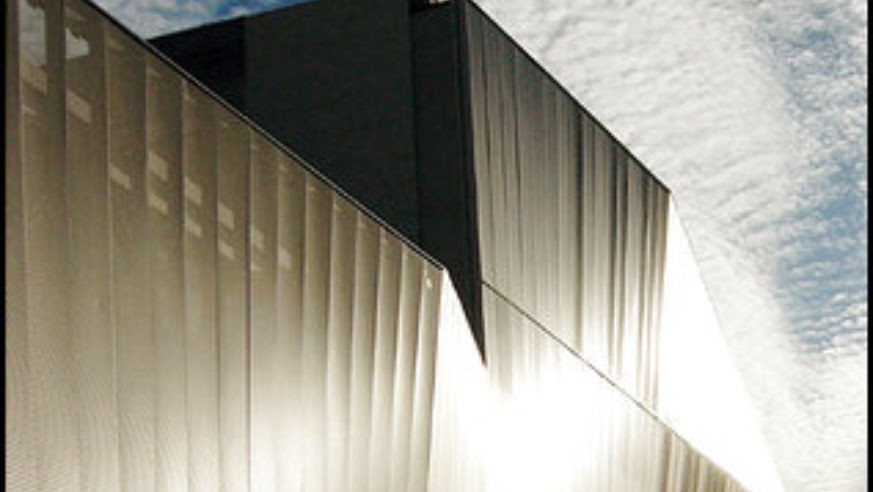 The Forum site in Barcelona

Much like Italy in the 15th century, Spain is experiencing a cultural renaissance, one that's transforming the country--city by city, block by block, building by building.

The government is pouring money into cutting-edge museums, performing-arts spaces, and convention centers. Not surprisingly, there has been a trickle-down effect, as the recent wave of infrastructure has inspired galleries, stores, and restaurants to open near the new buildings. Industrial wastelands are being reinvented as vibrant, hip neighborhoods.

Right, you're thinking, the Guggenheim Museum Bilbao. Indeed, if there's one symbol of the country's changes, it's the Guggenheim, which opened in 1997. But Frank Gehry's jutting, curving, titanium-clad wonder was only part of a $1.5 billion citywide overhaul, which included a convention hall, British architect Norman Foster's Blade Runner-esque subway stations (nicknamed Fosteritos by locals), and an airport designed by Spain's own Santiago Calatrava that looks like a cavernous dinosaur fossil with structural "ribs" made of steel.

Bilbao, however, is only one example of what's happening across the nation. Name your favorite city--chances are a glittering architectural marvel is sprouting up between red-tile roofs.

Historical context only makes these changes more dramatic. In the space of 30 years, Spain has shifted from a dictatorship to a democracy, from economic stagnation to growth, from cultural isolation to a place on the world's main stage. From 1939 to 1975, Francisco Franco basically ran the country with an iron fist, keeping strict control of regional governments from his center of control, Madrid. The problem was that, like Italy, Spain is wildly diverse--as those who have tried to flex their high school Spanish in Barcelona can attest. A Catalan or Galician from the north eats different food and often speaks a different language from a Castilian from Madrid or a Canary Islander. Franco, in a sense, forced Spain to unify. After his death, the country reorganized into a constitutional monarchy of 17 autonomous regions.

Ten years later, in the mid-1980s, the newly empowered community leaders of Galicia used their authority to make over the blighted city of Bilbao--luring in the Guggenheim with $40 million in funds. The national government paid for a new airport and subway. Close to 6.3 million people have visited the Guggenheim since its opening, generating $173 million in GDP in 2003 and morphing Bilbao from a faded shipping port to a must-see European attraction. Nothing succeeds like success: Cooperation between national and regional governments became the model for Spain's future.

Bilbao wasn't the first time politicians realized what a lot of planning and money could do. To prepare for the 1992 Olympics, Barcelona transformed a 183-acre riverside section of the city into stadiums and athlete housing. After the games, the area was revamped into a posh neighborhood with apartments, malls, even an aquarium. Now Barcelona is kicking off another phase of redevelopment. This past year, a 74-acre complex of buildings in the industrial riverside district of Sant Adrià de Besòs opened as a 15,000-person-plus convention space for southern Europe. Before the conventions arrived, however, the head of the Catalan government, Pascual Maragall, chose to mount Forum 2004, a progressive-themed world's fair in what is a decidedly capitalistic zone. The themes: cultural diversity, sustainable development, and conditions for peace, all of which sounded rather dry unless you saw the Forum in action. Around the convention buildings (a dramatic glass box by Spaniard Josep Lluis Mateo, and a teetering purple triangle by the Swiss firm Herzog & de Meuron) stood palatial tents where African bands, Chinese acrobats, and American pop stars performed. A huge seawater pool stretched down the center of a riverside esplanade. In effect, the site was turned into a humanistic block party, where folks from all over the world came together to eat, drink, dance, sunbathe, swim, and learn a little about global issues.

As with the former Olympics sites, most of the Forum areas have been converted into parks, and the construction of public beaches, housing, and a marina is creating an urban fun zone along the Besòs river. Swank hotels and a new metro line have already sprung up on the main thoroughfare. At the end of the day, Barcelona will spend more than $2.3 billion on the project.

Barcelona is Barcelona, though--a major European city with an inherent appeal. Some of the most exciting evidence of the new Spain is in lesser-known cities. Like Bilbao, they're gambling on major architecture as a way to make the world pay attention. In the hills above the medieval cathedral city of Santiago de Compostela, in the northwest corner of the country, a $125 million performing-arts complex designed by American Peter Eisenman is under construction, with three of the buildings due to open in 2006. Encompassing 810,000 square feet, the project--which the local government has named the City of Culture of Galicia--includes a history museum, a library, a landscaped forest, and a theater for ballet, opera, and symphonies. Santiago, which has 92,000 residents, is clearly hoping that the City will draw new visitors, as well as the usual religious pilgrims, to help pay the tab.

About 600 miles southeast, in the Mediterranean port of Valencia, the City of Arts and Sciences is just finishing up construction. Also designed by Santiago Calatrava, the massive bone-white structures form a kind of museum compound--the buildings arc across several shallow fountains, each the size of a football field. Inside are displays and interactive exhibits on everything from dolphins to global warming. Last spring, the 20-acre aquarium opened, to be followed in 2005 by the Palace of the Arts, a glass and metal helmet-like dome with venues for opera, theater, and dance, including a 1,600-person auditorium. Total cost: $3 billion.

On Tenerife, the largest of the Canary Islands, Calatrava built a stunning, $70 million opera house that opened in 2003. It rises above the city of Santa Cruz in the shape of a cresting wave. Architects Herzog & de Meuron designed an esplanade to complement the project. Judging from the attention Tenerife has gotten in the media, tourists may one day skip the nightlife and beaches of the island in favor of a performance of La Traviata.

Where's the money coming from? The national economy is growing at a rate of 3.2 percent a year (among the fastest in the current EU), increasing tax revenues for projects. Furthermore, for the past few years Spain has been awarded the lion's share of infrastructure subsidies from EU headquarters in Brussels. When Spain first joined the EU, it was one of the poorest nations in the union and needed investment to get up to economic speed. Despite notable improvement in its fiscal situation, the country still received $8 billion in infrastructure subsidies last year. As Poland and smaller eastern European countries become active members, Spain will likely have to forfeit much of its funding.

Nevertheless, national hopes remain high. Even Madrid is getting in on the action, if on a smaller scale. By the end of 2005, the city's three world-renowned museums will be renovated and connected by the  Paseo del Arte (Art Walk), which takes 10 minutes to cover on foot and resembles the Mall in Washington, D.C. Each museum is also making significant additions. At the Prado, a new building is planned, along with a reconstruction of a Romanesque cloister. As of last June, the Museo Thyssen-Bornemisza completed the addition of 16 new galleries. The Reina Sofía, home to Picasso's Guernica, plans to open three new buildings (designed by French architect Jean Nouvel) to house works by modern masters such as Joan Miró and Salvador Dalí, as well as a library and a restaurant.

The Madrid projects are stately, functional, and sure to appeal to international visitors. But compared with what's going on in the rest of Spain, they're definitely less risky--quiet assimilation versus loud reinvention. Perhaps these cautionary tendencies are a result of the capital's stately character. Or perhaps they're a legacy of Spain's previous president, José María Aznar, a conservative. Aznar 's power struggles with the regional governments, along with his support of the Iraq war, led to his defeat last year. His more liberal successor, José Luis Rodriguez Zapatero, has loosened the grip of the central government, withdrawn troops from Iraq, and promised more social changes, including support for stem cell research, increased wages and pensions, the creation of affordable housing, and the legalization of same-sex marriage--all in a predominantly Roman Catholic country. The social landscape of Spain, it appears, may be changing as quickly as the physical one. Because any serious renaissance is about more than just buildings.

How to do the new Spain

Our rip-and-go guide--including affordable hotels that don't skimp on style.

Treat yourself to classical music and avant-garde architecture at the Tenerife Opera House. Mozart, Hayden, and Mahler are all on the bill for this spring. Click on programación at auditoriodetenerife.com for schedules (in Spanish, but clear enough). To buy tickets, check out generaltickets.com/cajacanarias, $16 to $35 for most performances.

For a virtual tour of the Forum site, see barcelona2004.org. The fastest route to the actual Forum site (the intersection of Av. Diagonal and Rambla Prim) is the new Forum station on the upgraded Metro Line 4 (stop: El Maresme Forum). The exhibits have closed, but you can hang out by the outdoor seawater pools--chairs are even provided. Instead of a hotel, book one of the five design-inspired loft apartments housed in an old post office (Apartments Correu Vell, 011-31/64-560-6674, bcn2stay.com, $108, last-minute specials $81), then tour the nearby artsy El Raval district. Home to the Contemporary Art Museum of Barcelona, or MACBA (Plaça dels Àngels 1, 011-34/93-412-0810, macba.es, $9), it's yet another neighborhood that's turning around as we speak. One last note: This month marks the start of the city's "Gastronomic Year"--a celebration of Catalan cuisine, with fiestas, walking tours, and more. See barcelonaturisme.com for info.

Sure, you'll tour the famous cathedral. But do make time to visit the compelling architectural models of the City of Culture, currently under construction (City of Culture Foundation, Rúa de San Roque 2, Hospital San Roque building, cidadedacultura.es). Several other designs--inventive, but ultimately rejected--are also on display. For atmosphere, you can't beat the Hotel Airas Nunes, in a medieval stone building right by the Cathedral (17 Rua do Vilar, 011-34/90-240-5858, pousadasdecompostela.com, from $81). And bear in mind the option of staying in one of Spain's renovated historic inns, or paradores. Parador de Santo Estevo, once a Benedictine monastery, is a group of Romanesque buildings updated with individually designed, antiques-filled rooms (Nogueira de Ramuín, Galicia, 011-34/98-801-0110, parador.es, from $155). The new Spain is fantastic, but so is the old Spain.

On your way to a day of museum-going, stroll the three miles of unhyped parks along the Turia River, where the city kicked off its transformation. At the southern end of the gardens stands the City of Arts and Culture (011-34/90-210-0031, cac.es). Check out the Hemispheric planetarium's metal "eyelid"; the Oceanographic's underwater aquarium restaurant; and the soon-to-be-finished Palace of the Arts. The 28 rooms at the Ad Hoc Hotel, in the historic Xerea quarter, are done in a semi-modern decor, some with pretty, exposed-brick walls (Calle Boix 4, 011-34/96-391-9140, adhochoteles.com, weekend rate $120).