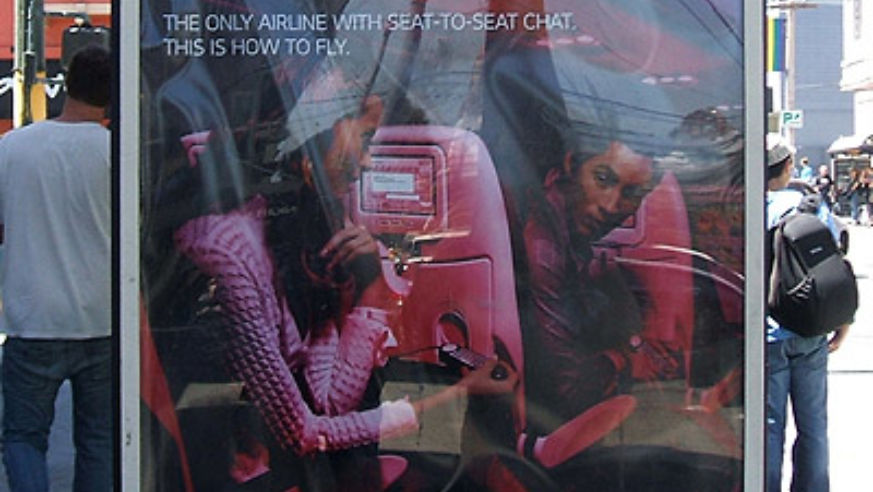 If its ad campaigns are any indication, Virgin America has big plans for its in-flight instant messaging service. The airline is apparently convinced that passengers will while away the hours gossiping, discussing breaking news, sharing musical recommendations—and, of course, finding true love only a few (previously inaccessible) aisles away.

On a recent cross-country flight, it didn't happen that way. The IM service actually worked really well: It was instantaneous and easy to use, though the keypad was a little awkward for thumbing out your messages with the expected lightning speed. But ease-of-use is only half the battle. It turns out that the attractive woman sitting only two seats away from me wasn't the least bit interested in IMing—and didn't believe for a second that I was just trying to test the service. She was on to me.

Rejected, I joined the jet-wide chat room, but there was no one there. For hours.

So I toggled over to the TV chat rooms, where you can post comments about the channel you're watching and start a real-time conversation with your fellow travelers. When I saw that every TV chat room was empty, well...I decided to take drastic measures. Over the course of an hour in the CNN chat room, I took pot shots at Hillary Clinton, then George Bush, then Barack Obama—making sure to raise ire on all sides. While watching MTV, I first flamed Led Zeppelin, and then posted some truly heretical comments about the Beatles. The kind of stuff that makes rock fans of the male persuasion, especially, spew indignant best-band-ever trivia for hours. But no one said a word in defense of anybody. There was virtual silence.

I finally tested the speed and reliability of the service by holding a long IM discussion with the empty seat next to me. I IM'd to myself for what must have been a half hour, picking up one keypad as I put down the other. At some point, I imagine, the attractive woman two seats away felt that she'd made a really wise decision.

The technology on Virgin America is great stuff—the touch screen interface of the airlines' seatback consoles allowed me to order food when I wanted it, for example. I touch-selected a drink and a snack, swept my credit card through the slot at my seat, and the items were delivered in minutes. The airline didn't accept any cash on the flight. On-demand movie service apparently worked with the same cash-less ease, if the passengers around me were any indication.

But I don't think the IM service can get a lot better—and right now, despite all the buzz and the great performance, it looks like people simply don't want it.