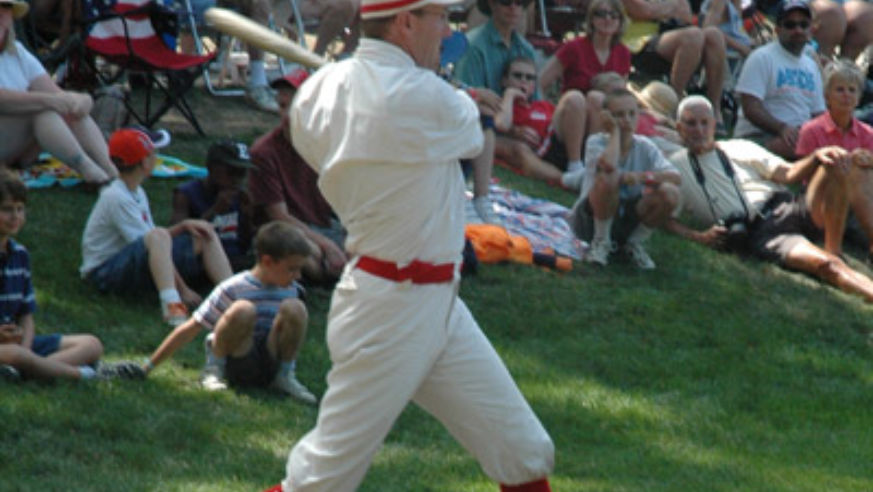 Curious about how baseball was played in the 1860s? This weekend's World Tournament of Historic Base Ball in Dearborn, Mich., gives you a chance to see what our national pastime was originally like.

Set on the grounds of Greenfield Village, an 80-acre historic community established by Henry Ford in 1929, the competition pays homage to the first World's Base Ball Tournament held in 1867 in Detroit, with teams playing by the rules, and with the same equipment and uniforms, as their 19th-century counterparts.

The tournament, in its seventh year, will pit 16 vintage ball clubs from Ohio, Michigan, and Indiana—including Greenfield Village's own Nationals and Lah-De-Dahs—against each other in a series of 28 games over two days, starting at 9:30 a.m. on August 8 and culminating in the championship August 9 at 2:30 p.m. The prize for the winning team: $300, same as it was in 1867. And the team with the fewest wins doesn't go home empty-handed. That ball club scores a sack of peanuts.

Don't be surprised if you notice a few differences in the game: According to the rules in effect in 1867, pitchers must throw "fairly" (i.e., hittable pitches) underhand, and a foul ball caught after one bounce is still considered an out. The umpire (there's just one!) warns the hitter before he starts calling strikes—foul balls don't count—and, likewise, warns the pitcher before he starts calling balls—but after the warning, only three balls get the batter a base. At the time, gloves were becoming more common, but they were fingerless and made of leather, mainly meant to protect the palm. Players wore them on both hands, making throwing a bit of a challenge, and possibly explaining why games often ended with scores of 61–34 or 41–40.

Between games, you can take part in a Massachusetts Rules Game, a pre-Civil War stick-and-ball game; participate in the 1867 Base Ball Skill Test, where you can try your hand at pitching, yes, underhand and see how fast you can run the bases; watch the Players' Skills Competition, to see which team has the most accurate thrower, the fastest runner, and who can throw the ball the farthest; play another version of a stick-and-ball game, cricket; and enjoy a George Gershwin-inspired music and comedy revue. Saturday's events culminate with a 7 p.m. concert by 19th-century brass band the Dodworth Saxhorn Band and a fireworks finale.

World Tournament of Historic Base Ball events are free with Greenfield Village admission ($22 for adults, $16 for kids 5–12). The fields have "hillside seating," so bring a blanket to sit in the grass or, if you don't mind carrying them around, lawn chairs. If you can't make it this weekend, the Nationals and Lah-De-Dahs host home games the following two weekends at Greenfield Village.

While you're there: Check out the rest of Greenfield Village, which is home to 83 authentic historic structures, many of them moved to the area from their original sites, including Noah Webster's Connecticut home, Thomas Edison's Menlo Park, N.J., laboratory, the Wright Brothers' Dayton, Ohio, bicycle shop and house, the Illinois courthouse where Abraham Lincoln practiced law, and, of course, Henry Ford's birthplace. You can also dine on 1850s fare, take a ride in a Model T or a steam locomotive, and watch artisans pull glass using traditional methods from the late 19th and early 20th centuries.

Greenfield Village is part of The Henry Ford, an educational and historical complex that also includes the Henry Ford Museum (admission is additional). Hotel and attraction packages are available here.