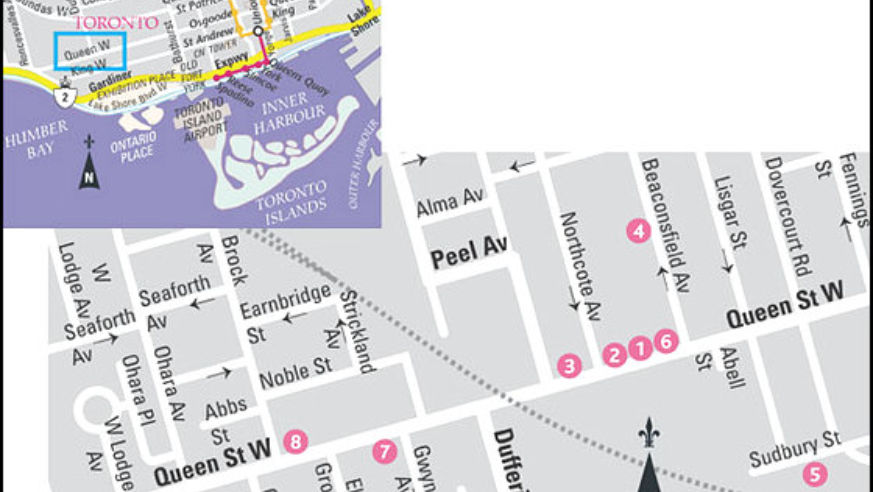 The folks at Streetwise let us use this map--and even shared detailed bonus material ($6.95, streetwisemaps.com)

1. The stretch of Queen Street West between Trinity--Bellwoods Park and Dufferin Street is formally known as West Queen West, but the informal--and easier--name is the Art and Design District. Forty-one galleries call the area home. Some are bigger than others: At the Fly Gallery, two artists/curators devote the bay window of their apartment to works by local artists. 1172 Queen St. West, 416/539-8577.

2. Don't mind the slightly unkempt exterior at Addis Ababa, a 13-year-old Ethiopian restaurant. Doro wat (chicken in berberé sauce) and gommen wat (collard greens with ginger and garlic) are served atop injera, a spongy flat bread that does double duty as a utensil. Stick around for the coffee. Made from strong beans, roasted daily in the kitchen, it cuts nicely through the bread, which expands fast in your belly. The coffee's aroma is complemented by a small stick of pungent frankincense left to burn on a dish at the table ($5). 1184 Queen St. West, 416/538-0059, dinner for two $25.

3. Three years ago, Christina Zeidler, with the help of her architect father, Eberhard, bought The Gladstone Hotel--a grand brick and stone Victorian that's Toronto's oldest continually operating hotel--and they've been getting local artists to do the decorating. By next month, 37 of the 51 rooms will be completed. Poetry readings and drawing classes take place regularly on the ground floor; and the Melody Bar hosts karaoke Thursday through Saturday nights. 1214 Queen St. West, 416/531-4635, gladstonehotel.com, from $114.

4. Built in the 1880s and '90s, the Victorian houses lining Beaconsfield Avenue between Queen Street West and Argyle Street are relics from WQW's wealthier days, and the city has designated many as heritage properties. Number 38 is the three-room Beaconsfield B&B, owned by an artist and an actor, Bernie and Katya McLoughlin. Breakfast may include berries fresh from the garden. 38 Beaconsfield Ave., 416/535-3338, bbcanada.com/beaconsfield, from $72.

5. Mildred Pierce Restaurant, named for the 1945 film starring Joan Crawford, is a classic itself. The French-Indian fusion restaurant has been a neighborhood fixture for 15 years. Floor-to-ceiling murals of a Renaissance feast are a fitting accompaniment to a Sunday brunch of "green eggs and ham" (scrambled eggs with spinach, served with a thick slice of ham and a buttermilk biscuit). 99 Sudbury St., 416/588-5695, green eggs and ham $8.

6. The Beaconsfield isn't on Beaconsfield Avenue, despite the name. A bistro in what was once a bank, it has a vibe both modern and glam. Hunker down on a maroon banquette and order a pint of one of the nine beers on tap ($5), and a burger with aged cheddar and shoestring fries ($10). 1154 Queen St. West, 416/516-2550.

7. The migration continues under the railway tracks that cross Queen Street West to another frontier neighborhood, Parkdale. Last year, Jamie Cheveldeyoff, an art director for music videos, turned what was once a methadone clinic into a decor boutique, Koma Designs, which sells shabby-chic furniture gathered from vintage shops and estate sales. 1239 Queen St. West, 416/532-5662.

8. Parkdale's Ground Level Café is run by a government-funded program that provides jobs to homeless and disadvantaged youth. At Saturday brunch, nothing on the menu--blueberry pancakes, omelets--costs more than $6. 1340 Queen St. West, 416/531-5346.