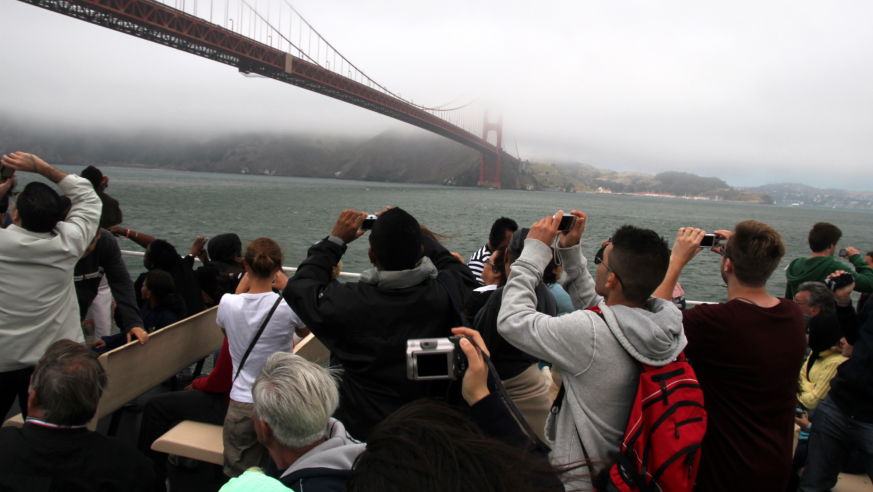 Stop! If you want your pics to stand out from the crowd, put down your camera or smartphone long enough to read these easy pro photography tips.

Cathy Bennett Kopf is the editor of The Open Suitcase.

I fully intend to take dancing lessons before the first of my kids gets married. It’s one of my self-improvement goals. I have others, including “learn how to host an excellent dinner party” and “master intermediate plumbing” – I consider myself an advanced beginner, having repaired many running toilets.

Also on my list was the goal to improve my photography skills but it soared to number one with a bullet when I booked a bucket list trip to South Africa. Taking photos with my iPhone and compact camera would be fine, but I want better than fine for this trip. So I went looking for a professional photographer who would be willing to share some tips and techniques.

I didn’t have to hunt too long or too hard. One of my college chums happens to be dating a very talented photographer who was kind enough to agree to mentor me, like Mr. Miyagi and the Karate Kid.

Avery Meyers started taking photo lessons in high school; she was initially drawn to the subject because of the teacher (“He was hot!”), but soon realized her lust was really a passion. She studied in a landscape workshop under Ansel Adams and Jerry Uelsmann in Carmel, California, before heading to The Rhode Island School of Design, where she received a BFA in photography. Bicoastal by choice, Avery splits her time between Los Angeles and New York, where she is currently working on a black and white study of the city.

For our photo play date, Avery and I met at the Central Park Zoo for some simulated safari shots. I spewed the first of many questions immediately after passing through the entrance turnstile, “Do I need a camera bag?” Avery shook her head and pulled her camera out of a plain canvas tote. She explained that a DSLR body is fairly rugged and doesn’t require a special bag. Besides, when traveling, a camera bag screams “Steal me!” to thieves. Lenses do require a bit of TLC and Avery suggested neoprene bags for transport.

I may have this tattooed on my chest: don’t leave home without a spare, charged battery. I can visualize the moment when I press the shutter button to capture a photo of a sleeping lion and can’t because my little battery icon will have turned from green to red to off. Avery also recommends keeping extra memory cards in a clip-on case. She downloads her photos as soon as practical and then reformats the cards. Reformatting is a menu item on most cameras. Why? Because the cards become degraded over time and it’s possible for images to get trapped. I asked if I needed a lens hood. Nice, but not necessary, according to Avery. If you notice glare in your shot, she suggests using your hand to shield the front of the lens.

Patience is a Virtue

I shoot quickly and carelessly and hope I can crop a decent image once I get home. Avery suggested I’d get better results by doing the exact opposite. She explained how she gives some thought to her subject and then moves herself and the camera to eliminate distracting elements from her shots. And then she waits. This is particularly important when taking pictures of moving things like kids or animals.

So I gave it a try. In my first shot of the world’s cutest red panda, using my ants-in-the-pants shooting technique, the animal’s adorability was diminished by a stick in the center of the frame. I moved around the exhibit, focused my camera, and channeled Mr. Miyagi – “Wax on. Wax off.”

After a few minutes of waiting, my red panda started eating a stick, increasing his cuteness exponentially.

Not a morning person by nature (think vampire), Avery forces herself to get up and out before dawn to photograph special locations when traveling. For example, on a trip to Ireland, she really wanted to shoot the Giant’s Causeway, thousands of solidified lava columns along the coast. It’s a wildly popular tourist destination and by arriving at dawn, she was able to take pictures that weren’t filled with buses and tourists.

Speaking of tourists, patience comes in handy with them too. You’ll often be confronted with a fence or glass to shoot through when you’re traveling. Getting as close as possible and focusing (switching to manual lets you really hone in on your subject) helps to make the obstruction nearly invisible. So wait your turn, let the crowd dissipate, and then get as close up as possible.

With some practice, it becomes fairly easy to take a technically good snapshot. What I hope to cultivate is the art of capturing a place in a photograph, like Avery. As we were leaving, we were excited to get home and look at our shots. She was particularly eager to view her many penguin pics (Avery REALLY loved the penguins) but also to see how the city skyline looked in her sea lion shots. The skyline? Duh. I’d completely forgotten that we were in a zoo in the middle of Manhattan.

In my sea lion closeup, the animal could have been in any zoo or aquarium in the world. In Avery’s photo of the same sea lion with a bit of skyline behind it, she gives you, to quote John McPhee, a sense of where you are. And that is the difference between an amateur and a pro.