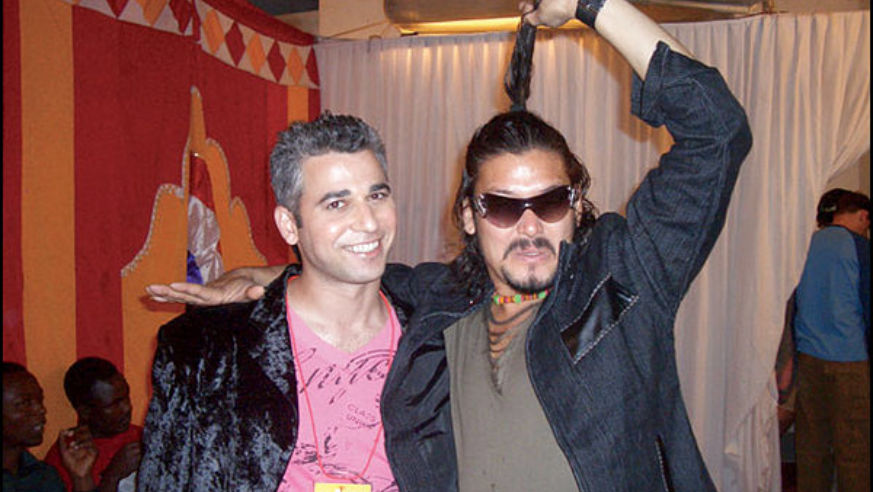 The author, far left, took these shots during the filming of "Never Say Goodbye"

I'm sitting in a swank New York City nightclub sipping champagne with one of the biggest film stars in India. Except the champagne is actually sparkling apple juice, the club is a Mumbai set, and the superstar has no idea I'm here. I'm one of 50 or so foreigners who've been hired to be extras on a Bollywood movie.

Bollywood--a hybrid name combining Hollywood and Bombay, as Mumbai used to be known--is the epicenter of India's film industry, and visitors can play a small role in making movie magic. "When a script calls for a scene to take place in a foreign country, we find Westerners to appear as extras for authenticity," explains Khan Shaban, the extras coordinator for Casting Planet, a three-year-old agency hired by several Bollywood production companies.

Shaban suggests that aspiring extras should get in touch with him as early as possible; I e-mailed Casting Planet six weeks in advance with my available dates (011-91/98-20-86-42-96, polo_k83@yahoo.com). He also says that he and his colleagues pick up tourists last-minute near the Gateway of India in Mumbai's main tourist area of Colaba if assignments arise on short notice, which is often. However they manage to land a part, extras are paid $11 a day.

I only learn what my movie's about when I get to the Filmistan Studios at 9:30 a.m. My role is to play a disco dancer attending a bachelor party in a romantic comedy called Kabhi Alvida Naa Kehna (or Never Say Goodbye), due to be released this summer and costarring the Indian host of Who Wants to Be a Millionaire. Once in costume--hot pink shirt, black velvet jacket, jeans--I'm escorted to the set, which has red and yellow neon lights on the floor, chaise lounges, and a long wooden bar. The assistant director spreads us all out evenly, cautions us against stealing the focus away from the real actors, and then offers this instruction: "Pretend you're at the best party ever!"

Each time the director yells "action," we all dance like crazy while the sound engineer records dialogue--the music is added later during the editing process. It looks fairly ridiculous pretending to bust a move in complete silence, not to mention the fact that old-school steps like the Robot seriously fall flat when I'm not able to add on my own whirring noise. After three hours of listening to the actors repeat the same lines (in a combination of English and Hindi), we're all a little punchy. In the balcony, a cluster of Canadians has perfected the Electric Slide when the director finally calls for the lunch break at 1:45 p.m.

"It's loads more interesting than going to see another museum," says Swedish visitor Petra Borg, 22, while at the lunch buffet. By the time 9 p.m. arrives, we've completed only four scenes, but it's a wrap for the day--and for most of us, an end to our entire Bollywood careers. I ask Ben Emslie, vacationing from London, if he'd sign on to be an extra again next time he visits. "It was a unique experience, and I'm glad I did it," he says. "But if I want to become a movie star, there's got to be a faster way."