Although Amsterdam is as much of an experience as it is a place, the city of Utrecht—the fourth largest in the Netherlands and an enclave for students and artists alike—provides an idyllic setting for families. With at least 16 festivals year-round, this first-century city proves that there's much more to Holland than windmills and tulips.

Culturele Zondagen: Cultural Sundays is a series of monthly events supported by local art institutions to create a theme relevant to Utrecht, from the passion of voetbal (soccer) to performances at the Oudegracht (Old Canal). Many disciplines—from opera, literature, street culture, and storytelling—are professionally represented during the events divided amongst dozens of locations. June 5–6, July 4, Sept. 12, Oct. 29–31, Dec. 19, , 011-31/302-323-080, free.

Festival de Parade: A roving festival that travels from Rotterdam to Amsterdam, the circus-like setting highlights street-theater performance, dance, musicians, and filmmakers both young and old. To really feel like you're part of a carnival, dinner is served in a mini ferris wheel. The Parade's reputation precedes itself, so when the sun sets and the party rises, there's a special section set aside for the younger members of the family. July 16–Aug. 1, Moreelsepark, 011-31/334-654-555, free to $10.

Festival Oude Muziek: The internationally renowned Early Music Festival has been an area institution for nearly three decades, with more than 60 classical concerts performed in church venues. This year's theme centers around music from the eras of the four Louis (XIII-XVI), including both instrumental and vocal French Baroque. Aug. 27–Sept. 5, Muziekcentrum Vredenburg and other locations, 011-31/302-329-010, free to $55 including lunch.

Just because San Francisco is a wine-obsessed town doesn't mean that we aren't equally in love with beer. The city has joined in the national thirst for craft beers, and several upscale beer bars have opened recently, with a rotating selection of hard-to-find brews. In fact, this month's GQ features two San Francisco spots, City Beer Store and Monk's Kettle on its list of the Best Modern Beer Bars. So if you find yourself a little thirsty in San Francisco, here are a few of our favorite decidedly un-Frat House spots to savor microbrews. Inner Sunset The newest addition to the upscale beer bar scene, Social Kitchen and Brewery opened just this month, offering five top-notch beers brewed onsite. Try the lemony Cologne-style Kolsch or the heavier Belgian Dark which is somewhat similar to Chimay. Social Kitchen mixes in unexpected delicacies into the bar menu, with sweet potato tempura fries ($4) and a Hawaiian-style spam burger ($13) as well as standbys like mushroom dip sandwich ($8). 1326 Ninth Ave, 415/681-0330 SOMA City Beer Store and Tasting Bar serves more than 300 specialty beers ranging from obscure European bottles to Northern California brews on tap. Thursday nights are "flight nights," when the helpful, knowledgeable staff offer up a selection of beers for comparison. It's a small joint (read: crowded), so go in the afternoon or grab some beer to go: City Beer encourages a mixed-and-matched six-pack to get a wide sample. But if you'd rather soak up the beer-geek atmosphere, order a cheese plate or a takeout meal from Chez Spencer's to-go truck across the street before you start sipping. 1168 Folsom Street, 415/ 503-1033 Mission Monk's Kettle is an upscale gastro pub serving bar food with a fine-dining twist. But of course, all food is elevated when paired with one of 150 craft beers&mdash;enjoy a giant pretzel with house-made cheddar ale sauce ($8.75) and an extra-special bitter ales or a beer-braised pulled pork sandwich with jicama slaw ($12.75) with a coffee porter. The dense menu explains the nuances between the various brews and defines the difference between things like ales and lagers, helping you navigate your choices. If the daunting selection is still too much, ask for the certified cicerone&mdash;akin to a wine sommelier&mdash;will help you make your choice. 3141 16th Street, 415/865-9523 Upper Haight Magnolia Brewery and Pub serves a rotating selection of beer on tap, including their own artisan ales bottled in the tiny seven-barrel brewery downstairs. Go on a Tuesday, when all beers are $3 all day and all night. You can also find Magnolia brews at other bars around the city. 1398 Haight Street, 415/864-7468 North Beach The dimly lit beer bar at La Trappe Cafe is an old-school institution that pre-dates the latest beer trend. Known mostly through word-of-mouth, the bar has a 50-page menu, 19 rotating taps, and "rare find" small batches from microbreweries. It's the perfect North Beach respite from the often-crowded area. 800 Greenwich Street, 415/ 440-8727 And don't forget about Anchorsteam... A story about beer in San Francisco would not be complete without a mention of Anchor Steam beer, founded in 1896 and served in many bars around the city. There's even an Anchor Steam pub at San Francisco's International Airport. The company was recently sold to a new owner, but have made promises that the beer will stay the same. Sign up in advance for one of the popular 2-hour tours of the three-floor facility, where you'll learn about the history and process of making beer. And most importantly, enjoy a free tasting at the tour's end. The weekday tour is free, but reservations are required in advance; sign up now for tours in July. 1705 Mariposa Street, 415/863-8350

As history has taught us, a boycott can be an effective way to send a message to "the man." But is it effective when "the man" is a travel company, a hotel&mdash;even an entire state? Arizona's recent immigration law, which requires that police officers in the state check the immigration status of individuals they suspect lack documentation and whom they encounter during proper procedure, has caused some cities to boycott business travel there, including St. Paul, Minn., and Oakland, Calif. In a USA Today article last week, Phoenix deputy city manager David Krietor said that the city could lose up to $90 million in business in the next five years, because major conventions are choosing to move locations, and tourists might decide to travel elsewhere. This isn't the first time Arizona has been in the news for a travel boycott. Back in the early '90s, the state refused to recognize Martin Luther King, Jr. day with a paid holiday, and lost the bid to host the 1993 Super Bowl because of it. Voters ended up approving the holiday. The more recent boycotts seem to be serious enough to cause their own backlash&mdash; in San Diego, possible tourists have already called to cancel plans, apparently because of the city's support of a travel ban to Arizona. Speaking of California, a few of San Francisco's hotels are being boycotted by Local 2, a union of hotel workers. Members of the union have been working without a contract since last fall, when negotiations with hotels stalled because of a fight over health care. A flashmob recently popped up at the Westin St. Francis and did a clever song-and-dance routine to publicize the ban. (Many thanks to our intrepid San Francisco-based blogger, Justine Sharrock, for pointing this issue out!) Many smaller-scale bans of all kinds are organized via Facebook (of course). Remember when Spirit Airlines announced it would charge $20 for carry-ons?. Yep, there's a Facebook group that advocates banning the airline. Do travel boycotts work? Well, no one's really sure. But it seems boycotts can cause lost revenue, public discussion, and a heck of a lot of bad PR. So I put the question to you: Have you participated in a travel boycott? Would you? What do you do when politics and travel intersect? 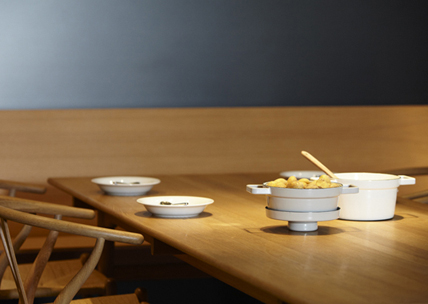 A bookshelf made from hardcover books. A necklace partly strung with living flowers. A bracelet crafted from brown-mottled horn&mdash;and designed to double as a digital watch. These products combine practical purposes with fresh visual and tactile appeal, and they were all invented in Vienna. In recent years, Vienna has won renown as a global hotspot for design innovation. A centuries-old legacy of craft and an influx of creative types from eastern Europe have caused design to flourish in the Austrian capital. This October, Vienna Design Week reveals the best new design discoveries at more than 80 events in about 50 locations. All of the exhibitions are free and most are understandable to English-speakers. Ten artists will be paired with local manufacturers in workshops to create, in a week's time, clever interpretations of common items like chairs, lampshades, and soup pots. In a new twist this year, the city's tourist offices are offering do-it-yourself walking tours, grouped by theme. October 1&ndash;10, viennadesignweek.at. Happily, Vienna is one of the Top Ten Budget Travel Destinations in 2010, with hotel rates and airfares cheaper now than at any time since 2002&mdash;and much cheaper than the European capitals it's starting to rival. If you're visiting the city at another time than during Design Week, here are a few shops where you'll find the smartest designs. PARK A futuristic fashion store, done entirely in white, stocks trendy clothing along with illustrated books. Mondscheingasse 20, park.co.at. MQ Point Unusual gifts and ecclectic accessories by international designers, many exclusively for sale here. MuseumsQuartier, mqw.at. MAK Design Shop Limited editions by Austrian designers and products for sale at the gift shop for Austria's museum for the applied arts. (There's an outpost in L.A., too.) Stubenring 5, mak.at. MORE Also on Vienna's arts agenda, the Albertina will present a Pablo Picasso exhibit "Peace and Freedom" from late September and it will exhibit a collection of Michelangelo's drawings survey from October 8.

Italy and France are Europe's darlings, so Spain doesn't always get the coverage it deserves. We've picked 18 fantastic reader photos that do justice to the country's cities and varied landscapes, from rolling olive groves to palm-fringed beaches. See the slide show! MORE READER SLIDE SHOWS France | Italy | Ireland STILL IN SEARCH OF... We're now collecting your compelling portraits of locals around the globe. Upload the photos through myBudgetTravel, tag them, and check back in the coming weeks for a slide show of the best submissions.