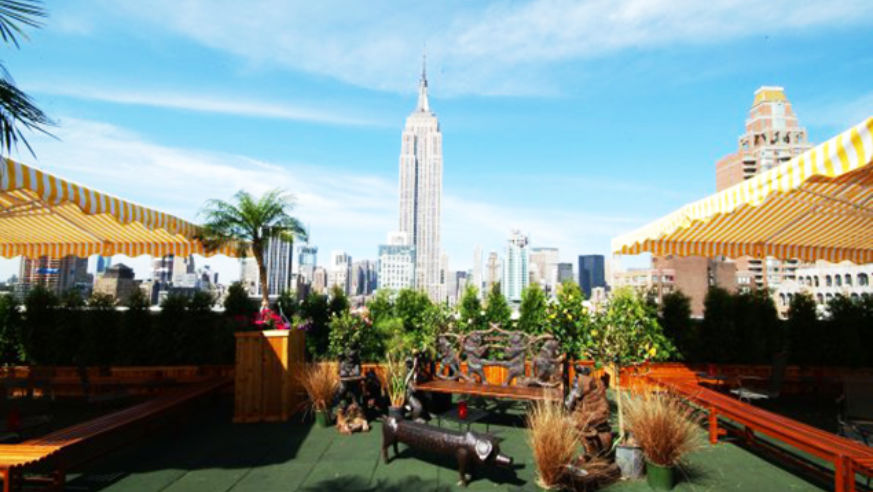 The view from brunch at 230 Fifth in New York City.

Sex and the City may have originally brought it fame, but the exalted event dubbed "brunch" has continued to be a metropolitan mainstay. More than ever, our vacations are planned around our meals—museums, shows, shoppes, and even hotel locations accommodate where we plan to eat during our vacations. As budget travelers, there is nothing like getting the most bang for your buck while elevating your experience, especially for the most important meal of the weekend. We've rounded up five places that let you brunch your way around the world without ever leaving New York City.

France
Just around the corner from the West Village's bustling Bleecker Street stems a curious French-inspired gastroteque by the name of Buvette. Known for its wine collection and small plate style, Buvette serves up a brilliant brunch complete with les oeufs "any style," classic croque monsieur, and an array of fresh and flakey patisseries. In the summertime, request a spot in the back garden patio, but for chilly afternoons, cozy up by the front window for top-notch people watching that rivals Paris itself.
Brunch small plates range from $7-$10; 42 Grove Street; ilovebuvette.com

Morocco
Café Mogador has been in business since 1983, a rarity in the cut throat New York City restaurant scene. After thirty years strong (and around 1,560 brunch weekends!), this Saint Marks Street hot spot is worth the wait, as its line admittedly queues quickly. Classic western mains meet Middle Eastern musts creating egg dishes with hummus, harissa, tabouli, and haloumi. The Village Voice still praises Café Mogador as the "Best Moroccan" among other Mediterranean restaurants, and its brunch offerings definitely have something to do with that adoration.
Try the housemade merguez sausage for $5; 101 Saint Marks Place; cafemogador.com

Austria
Cleverly named after its two Viennese expat owners, Eduard Frauneder and Wolfgang Ban, Alphabet City's Edi & the Wolf puts a new wrinkle in an already saturated scene, raising the bar for brunch. While the prices land around typical New York City fare, many choices are sharable, such as the schnitzel and the spätzle that boasts a mound of wild mushrooms, brussel sprouts, and fava beans. Don't miss out on this New York Magazine deemed famous brunch cocktail: Rhubarb Strawberry Mary, made with the Austrian-produced white wine Grüner Veltliner.
Prix fixe includes an entree, kaffe, juice, and croissant for $18; 102 Avenue C; ediandthewolf.com

United States
Ask any local and they would likely never associate the 230 Fifth rooftop bar with brunch. The draw here is not necessarily the scrambled eggs and toast, but the breathtaking view of America's iconic Empire State Building and her skyline. Viewing the striking structure against a bright blue sky, while holding a Royal Mojito in a palm tree-laden garden can make any meal grandiose. Open fifty-two weekends a year, 230 Fifth follows a strict "rain or shine" policy providing not only heat lamps but signature hooded robes for the chillier days.
Classic omelettes start at $11 but the view is priceless; 230 Fifth Avenue, 20th floor; 230-fifth.com

Brazil
The East Village's Esperanto boasts a ten dollar prix fixe meal that includes bottomless hot coffee or tea, one fresh mimosa or spicy bloody mary, and a mega-portioned traditional Brazilian dish. If you're feeling savory, indulge in the huevos loisada—poached eggs with Hollandaise sauce on a potato shrimp pie. For your sweet tooth, choose the tropical french toast, but be sure to ask for the fresh papaya as your favored fruit topping.
Prix fixe brunch for $10.95; 145 Avenue C; esperantony.com