Okay, so the phrase "The new TSA PreCheck application form went live this week!" may not be quite as hot as, say, "So sorry, there's no room in coach, would you mind if we bump you up to first class?" But if you're not one of the 25 million airline passengers who have already used PreCheck to zoom through security (with your shoes, belt, and coat on and your laptop safely tucked away), it's time to sign up!

Read the guidelines carefully and be prepared to share your name as it appears on your identification documents, the date and location of your birth , contact info, physical description, and to answer questions about your past (such as criminal record, history of mental illness, and any changes to your name). Next step is to bring your application to an enrollment site, where you verify citizenship, show ID, and get—yup—fingerprinted. The good news is that TSA plans to open 300 such application centers. The bad news is that only centers in New York, Washington, and Los Angeles will be open by year's end and only one—at Indianapolis International Airport—is currently open. (Insert government-shutdown joke of your choice here.) But once you are enrolled, the TSA reports that PreCheck is available at more than 100 airports nationwide.

TALK TO US! We want to know: Have you tried PreCheck? What did you think? 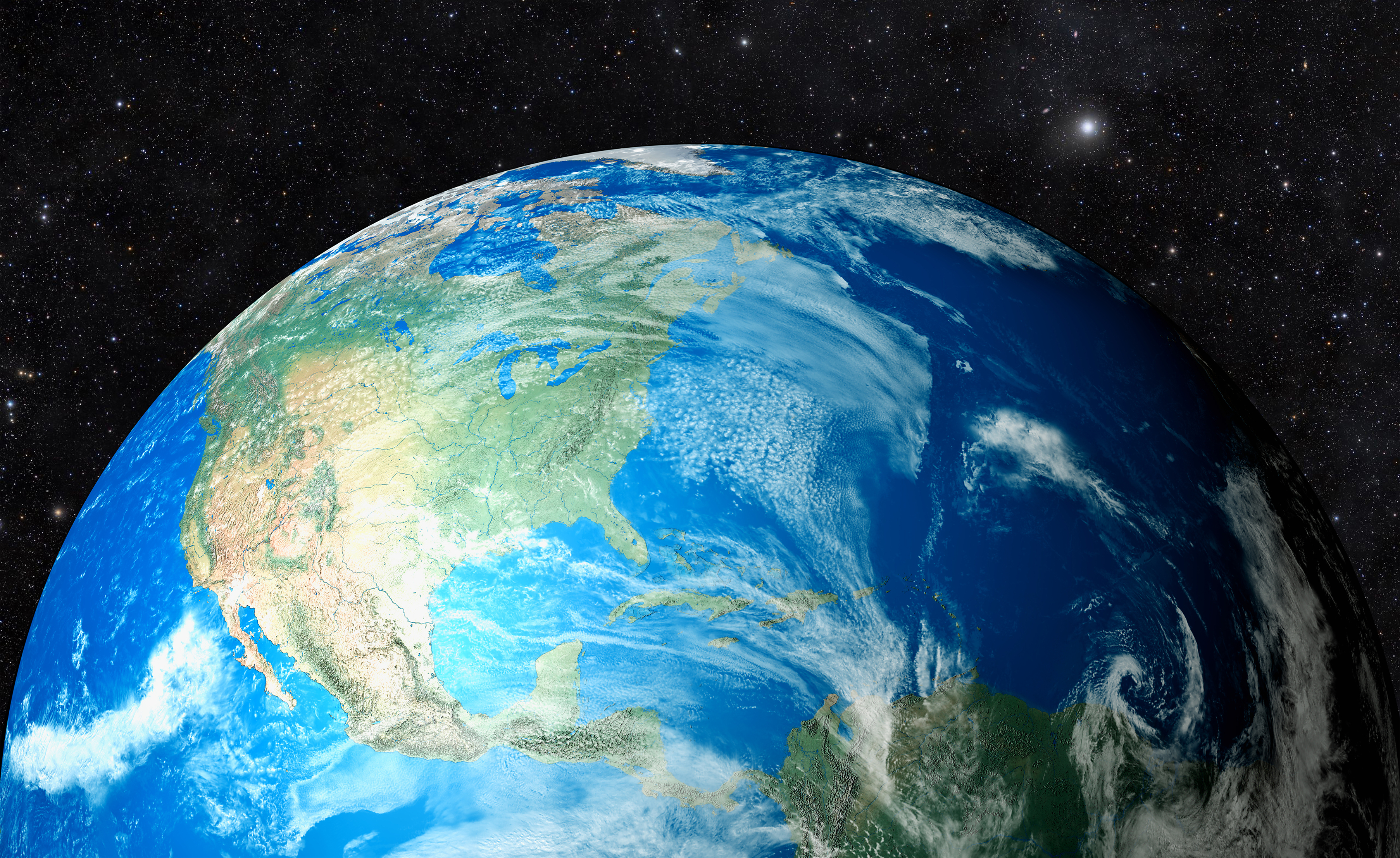 This Dude Visited Every Country on Earth—Without Flying!

Sure, you're well traveled. You've got pages of brag-worthy passport stamps and amazing true stories from the road. But Graham David Hughes, of Liverpool, U.K., has been to every country on the planet. And he did it without ever once boarding an airplane. Vicky Baker, writing recently in The Guardian, profiled Hughes and what he calls "the first surface journey to every nation on earth." Starting in Uruguay in January 2009 and finishing in Russia earlier this year, Hughes set the bar high: Not only did he not allow himself to fly, but he also ruled out driving, insisted on crossing only at official border points, and using public transportation whenever possible. His feat—covering 201 countries in 1,426 days—will likely be a Guinness World Record, though the Guinness judges faulted him for entering Russia illegally. (Hughes returned to Russia to get a new visa in hopes of having his world record approved.) Hughes documented his trip at theodysseyexpedition.com, and raised money for WaterAid. When Baker asked him for the highlight of his round-the-world jaunt, Hughes replied "Iran," praising that country for its friendly population and predicting that it would be a top tourist destination in the future. 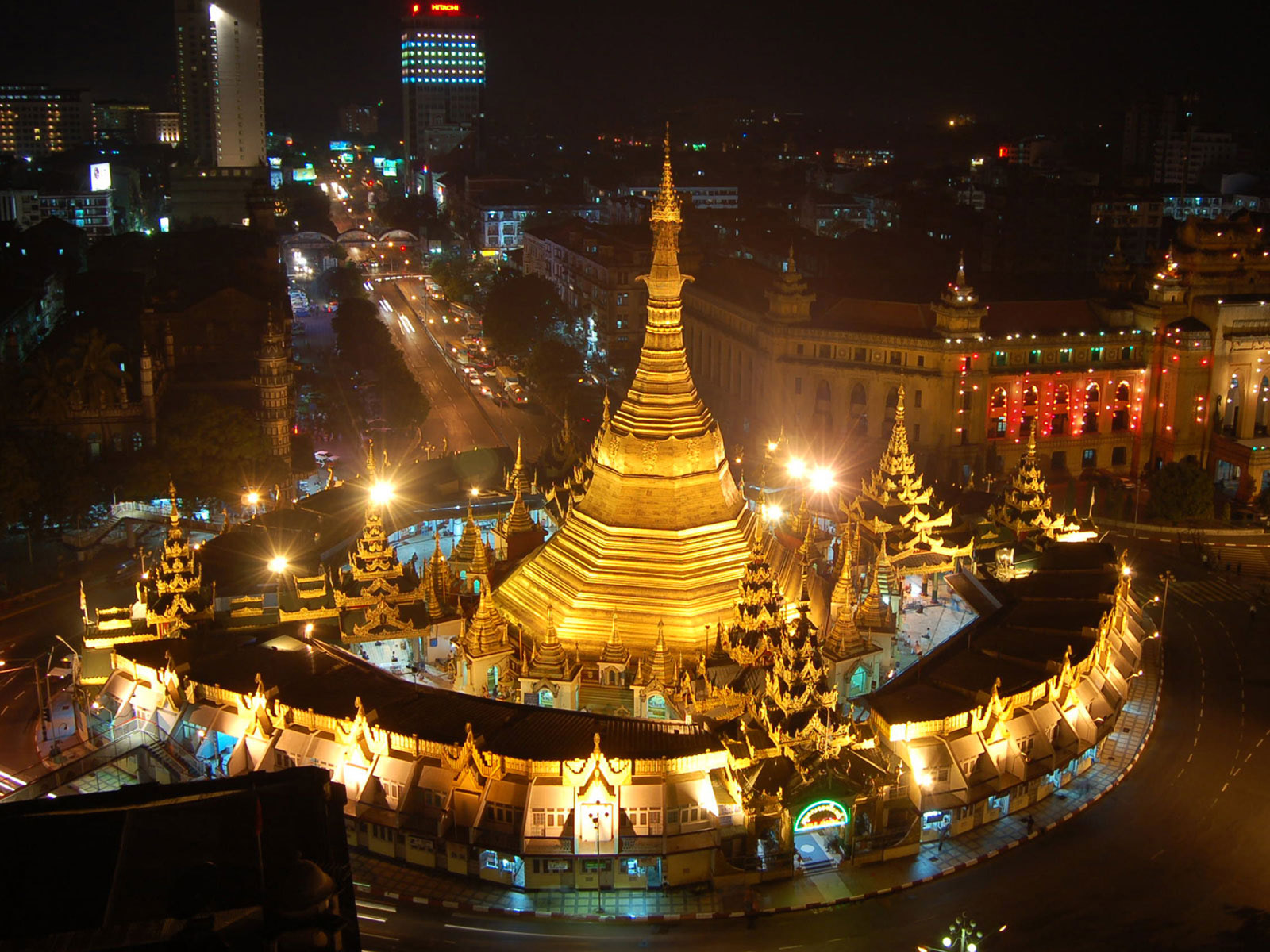 This article was written by Melissa Reichwage, an avid traveler and international development and health professional currently living in Colombia. She holds a Master's in Public Health from Emory University in Atlanta (USA). With familial ties in Myanmar, she has a special affinity for the beautiful landscapes and people of Myanmar. As you probably know, Myanmar has had its share of difficulties, but there's finally some good news: the tourism ban that caused many travelers to steer clear of the nation for over a decade has been lifted. In many ways, being cut off from the globalized world has allowed Myanmar to retain its cultural authenticity, making it an ideal destination for the more adventurous at heart. In 1898, Rudyard Kipling wrote the famous words, "This is Burma and it is unlike any land you know about." The same still holds true. The streets of Myanmar's largest city are stained red with betel nut, and filled with horse drawn carriages and bicycles, men wearing longyi traditional skirts, and women and girls with thanaka smeared on their faces. ATMs, internet, and cell phone connections are few and far between. Colonial buildings have hardly been touched since their British heyday. Now, more than ever, people from around the world are beginning to see Myanmar for what it is: a truly fascinating and unique place to visit. Abundant in unspoiled landscapes, rich cultural authenticity, and friendly people, Myanmar is strikingly different from its neighbors in Asia and there has been a sudden influx of international investment since the government has begun making reforms. It is now possible to buy some imported goods, stay in a luxurious hotel, and hail a taxi off the street. Yangon is likely to be your first stop in Myanmar, and it's not a bad option. Flying into Yangon International Airport (RGN) is recommended as land and sea border crossings can still be a tad insecure. Touching down in the country's largest city of more than five million people, the main economic hub feels nothing like Bangkok, Hanoi, or other Southeast Asian cities. The main sites in the tropical city actually cover a fairly small area and are manageable on foot, although taxis are available. Here are eight of my favorite places to visit. Shwedagon Pagoda: The most important religious site in Yangon stands atop Singuttara Hill. While built and rebuilt several times since the 6th century, the large gold pagoda remains popular with local Buddhists and tourists alike. Sule Pagoda: In the center of the city, the Sule Pagoda serves as a traffic circle in downtown Yangon. This 46 meter high octagonal-shaped gold pagoda is hard to miss. Inya Lake: The largest lake in the city has a nice walking path around its perimeter. It is also the most popular date spot for young lovers. Kandawgyi Lake: Located northeast of the city center, the lake is best known for the Karaweik, a replica of a traditional Burmese royal boat. Enjoy a drink at the small restaurant located at the water's edge for a view of the sunset and Shwedagon Pagoda in the distance. Buffet Dinner and Dance Show: The National Theater hosts folk and royal dance shows as does the Karaweik located on Kandawgyi Lake, mentioned above. A night out to one of these two shows is guaranteed to please your eyes, and ears, and fill your belly with a wide array of food. Chinatown: Located in the center of the city, Chinatown spans a few blocks. Street vendors sell a variety of items from goldfish to colonial coins. Bogyoke Aung San Market: A good market to buy Burmese souvenirs, such as wood carvings and traditional fabrics. Thingyan Water Festival: The most important public holiday, the Burmese New Year Water Festival, usually lands around mid-April. The Buddhist festival is celebrated for four or five days with intense water fights which metaphorically wash away sins from the previous year. It is the hottest time of year and a good dousing is welcomed by most. Turn back the clock with a trip to this time-warped country, enjoy simple pleasures, and discover a culture unlike any other. Here are some good reads to learn more about Myanmar: The Piano Tuner by Daniel Mason, Burmese Days by George Orwell, and Freedom from Fear: And Other Writings by Aung San Suu Kyi. **Note: In 1989, the capital was renamed to its original Burmese name, Yangon, from Rangoon** 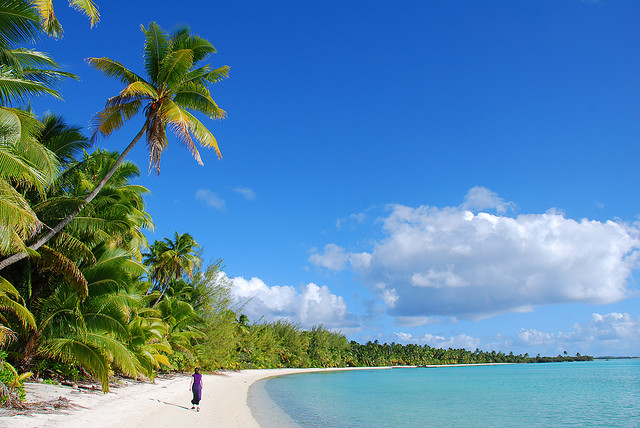 We'll keep this one short and sweet: The best way to nab bargain-basement prices on airfares is to follow the major airlines on Twitter—now!—to find out what last-minute Cyber Monday deals they are offering. As Budget Travel's Kaeli Conforti reported here last week, many hotels, resorts, and tour companies are offering great Cyber Monday deals, with savings of 20 to 30 percent—and sometimes up to 50 percent or more. But federal regulations prohibit airlines from announcing sales in advance. Here, the major American commercial carriers and their Twitter handles, as well as any Cyber Monday sale details we've been able to glean. Follow these airlines on Twitter throughout Cyber Monday—and beyond!—to get up-to-the-minute info on good deals. Happy travels! Alaska Airlines (@AlaskaAir) announced Sunday evening that its Cyber Monday sale had already begun, with flights starting at $49, and would continue through December 9. American Airlines (@AmericanAir) Delta Airlines (@Delta) JetBlue Airways (@JetBlue) offered a great Cyber Monday sale last year and a spokesperson has hinted that there may be a sale this year as well. Southwest Airlines (@SouthwestAir) United Airlines (@United) US Airways (@USAIrways) Virgin America (@VirginAmerica) offered a Black Friday sale with flights starting at just $49; stay tuned to see if they have something similar planned for Cyber Monday. 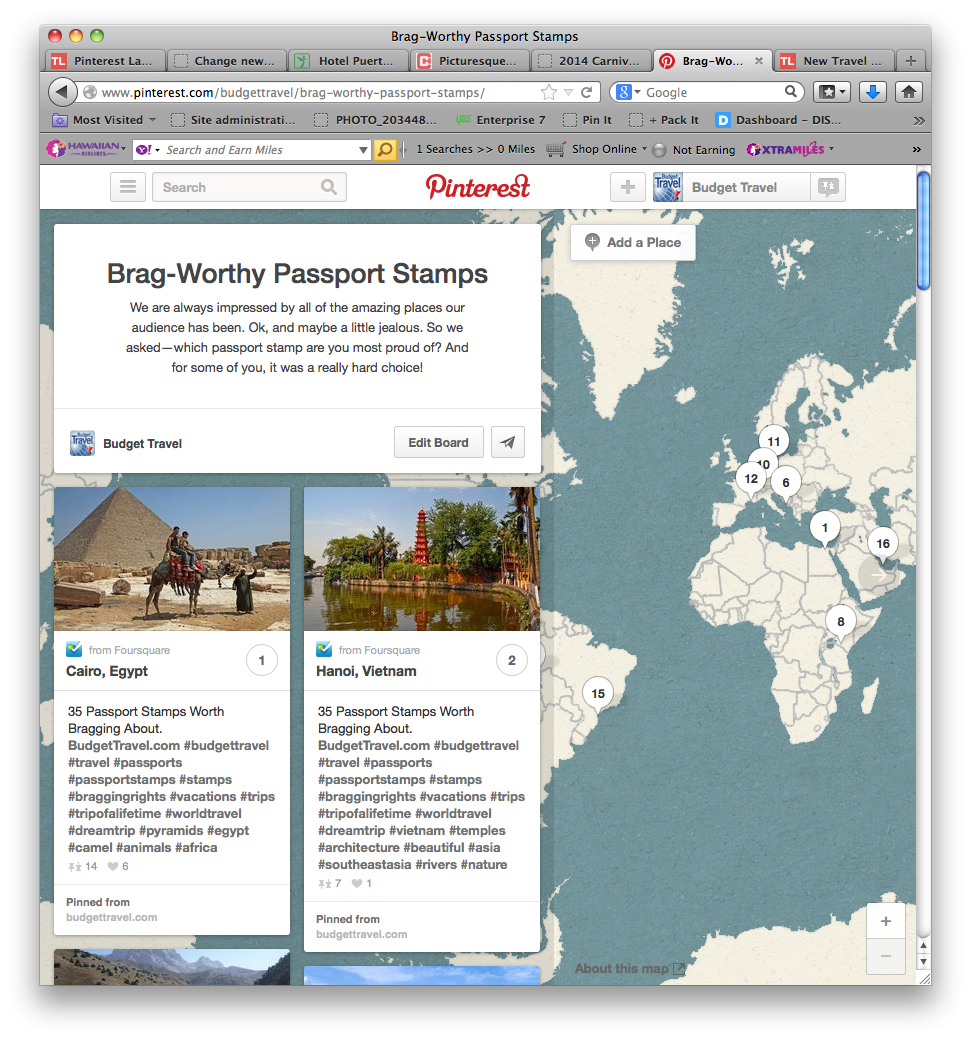 Believe it or not, Pinterest just got more addicting. Not only can you find photos, boards, and graphics for everything from knitting projects and classic recipes to travel quotes and holiday decorations, but now you can actually map out your dream trips and travel bucket list adventures. Social media sites like Pinterest are making it easier to plan your dream vacation, providing a wealth of ideas and images to help you get the ball rolling. According to this recent article by Skift, Pinterest is also planning to bridge the gap between fantasizing about and planning your vacations to being able to book them, but that's still to come. Budget Travel first came onto the Pinterest scene a little over a year ago with three modest boards highlighting our feature articles (see our Budget Travel Collections board, now serving as our Pinterest story archive), Readers' Best Photos, and Travel Deals to Get Now, and have since grown to more than 30 boards. We couldn't resist testing out Pinterest's Place Pins, a new feature that lets you tag the name of the place in your photo so it appears on a fancy map powered by Foursquare, showing the exact location. Check out our Best Budget Hotels, Wonders of the World, Brag-Worthy Passport Stamps, and A World of Christmas Trees boards to see the new trend for yourself. We want to know: do you use visually-oriented social media sites like Pinterest and Instagram for vacation ideas or to help plan your trips? Tell us about it below!