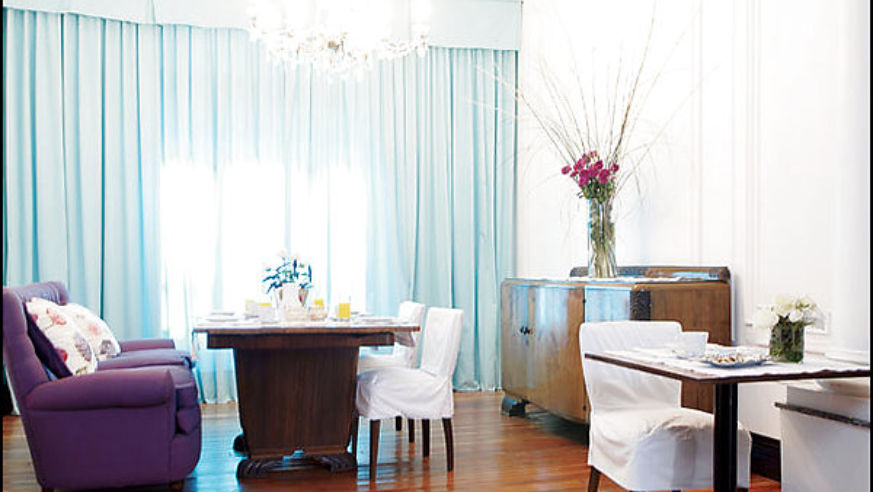 'Hood: Palermo Soho, a subsection of Palermo (B.A.'s trendiest barrio) near Plaza Serrano, where there are new restaurants and boutiques on every corner.

First impression: Since its debut in March 2005, Five Cool Rooms has attracted a young, international crowd. Guests hang out around the chimenea (fireplace) in the central courtyard or on the roof terrace. Polished concrete, rattan furniture, and bamboo plants give public spaces a Zen feel.

The rooms: The 16 rooms are labeled small, medium, and large. Medium rooms have balconies facing the street. The two large rooms--one of which has its own hot tub--overlook a quieter rear courtyard with a hammock.

Plus: In addition to all the outdoor seating areas, there's a sleek modern living room furnished with chocolate-colored faux leather couches and a big-screen TV. Guests can help themselves to free Argentine wine.

Minus: If you're settling in for more than a few nights, splurge on a medium or large room. The smalls are so tiny there's no room for even a suitcase stand.

'Hood: Palermo Hollywood, where the TV networks, film studios, and radio stations have set up shop. Models and actors make for great people-watching.

First impression: An early-1900s mansion--formerly owned by Evita's personal doctor--with high archways, stained-glass windows, and marble floors, it's kind of like your rich great-aunt's house. It opened in March.

The rooms: Each of the 10 large rooms is named for a different Argentine artist. The Victoria Ocampo (one of the country's greatest writers) has lilac walls, lace curtains, and a sheer canopy on the bed. In the Benito Quinquela Martín (known for his paintings of Buenos Aires's port), wood paneling evokes the inside of a ship.

Plus: Owner Cristina Marsden, born and raised in B.A., is plugged in to the local nightlife and can recommend the best bars and nightclubs.

Minus: Some of the renovations appear rushed: Several rooms are sloppily painted.

'Hood: Palermo Viejo, the most stately section of Palermo, full of century-old homes. It's where Jorge Luis Borges, Argentina's most celebrated writer, lived.

The rooms: Seven guest rooms are painted in vibrant colors like tomato red and forest green. Two (Azul and Blanca) share a bathroom; all but Blanca are equipped with A/C (it has a ceiling fan). The Bamboo Room features sliding glass doors that open onto a garden that blooms with bougainvillea, jasmine, and hyacinth.

Plus: When the weather is nice, breakfast is served alfresco, on a terra-cotta-colored patio. Honeymooners can have breakfast in bed at no additional cost.

Minus: Reservation confirmations must be made by phone or e-mail 72 hours prior to arrival. No credit cards: Only cash is accepted (upon checkout).

'Hood: Las Cañitas, between Palermo and Belgrano. The up-and-coming area is home to the polo grounds and some hot restaurants.

First impression: The look is urban gaucho, with butter-soft leather, dark wood, and natural cottons. Pablo Badler transformed what was his grandmother's house into an elegant hotel, with the help of his mother and sister. They launched 248 Finisterra in May, after more than a year of construction (and it still smells of fresh paint).

The rooms: The 11 rooms are done in soothing creams, pale greens, and sky blues, and furnished very simply with carefully chosen antiques. Tabletop light columns and striped throw pillows add a modern edge. Pablo's mother, Celia, makes sure there are fresh flowers in each room.

Plus: The second-floor deck, with lounge chairs and a hot tub, is the perfect spot to enjoy a glass of malbec. Bring one up from the wine bar on the ground floor.

Minus: The hotel is fully booked until November 1 with a private party. (A big star is holed up there, but the owner won't say who it is.)

'Hood: San Telmo, the oldest barrio in B.A. It's known as the birthplace of tango and famous for the Sunday-morning antiques fair in Plaza Dorrego.

First impression: When it came to naming their hotel, English expat couple Ian Spink and Aidan Pass thought of their beloved three-year-old cocker spaniel, Rocco. The Cocker opened in June, and everything about it reflects the creative and fun-loving personalities of its owners.

The rooms: Numbered for important dates in the owners' lives, the five rooms have double-height ceilings and French doors that lead to lovely terraces. Room 19-03 (Aidan's birthday) has a four-poster bed below a glass-walled loft bathroom. Doors lead to a private garden filled with evergreens, rosemary, and thyme.

Plus: This winter (summer in Argentina), the Cocker will debut a roof terrace. Guests will sip cocktails while watching art films projected onto the neighboring building. The deck also offers panoramic views of the city.

Minus: Rooms have small European-style wet rooms: There are no bathtubs, and showers aren't partitioned off from the sink and toilet areas.