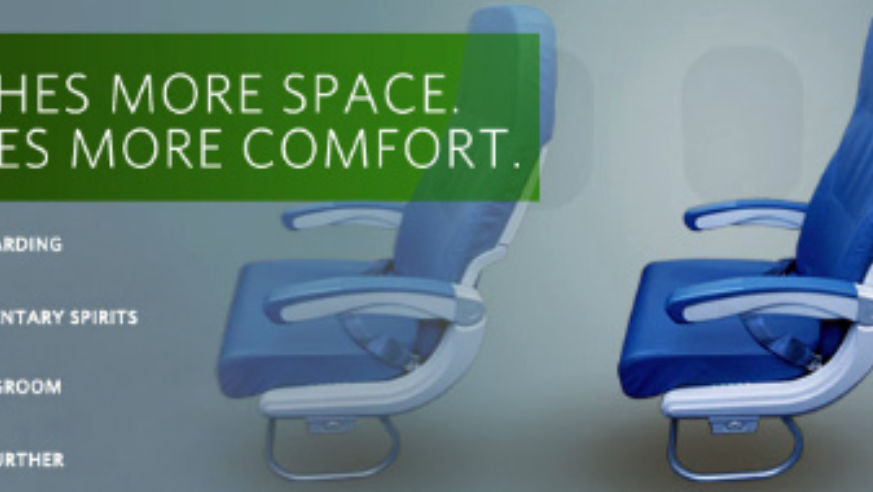 Starting June 1, Delta will offer long-haul flights with Economy Comfort seats, which will have an additional four inches of legroom, some free booze, priority boarding, free HBO programming on the seatback TVs, and about 50 percent greater angle recline in your seat, says the airline's blog.

The seats will be on 108 planes covering most "long-haul intercontinental routes between the U.S. and Europe, Asia, Africa, Australia, the Middle East, and South America (Lima, Brasilia, Rio de Janeiro, São Paulo, Buenos Aires, and Santiago)" says the airline.

You can't buy the Economy Comfort seats directly. But starting today, you may book an economy-class ticket, and then if one of these seats are available on your flight, you can upgrade to it. Prices vary, but The Points Guy (who broke the story, after Delta's blog) has reports of the cost being about $80 one-way on an East Coast to Europe route. The Economist's Gulliver blog sees upgrade costs as high as $160 one-way. In any event, Delta offers the seats for free to selected members of their frequent flier program, such as those with Diamond and Platinum Medallion status, notes Jaunted.

In short, great news for tall travelers with extra money to spend. Full details on Economy Comfort on Delta's site.

Delta joins a string of airlines with a medium upgrade option, such as to United/Continental's Economy Plus. Southwest is now the only airline not to offer a comparable service.

Reaction so far has been mixed. Gulliver, for instance, has mocked the name: "If you name your premium-economy seating "Economy Comfort," what not-very-subliminal message are you giving about the joys of your regular economy seating?" It's also criticized some of the details. "Early boarding is not much of a lure on an international flight with allocated seats."

But what truly matters is what fliers like you think.

Would you pay about $80 for an upgrade? Please vote in our poll or sound off with a comment below. Thanks!

Britain's royal newlyweds are coming to California in July