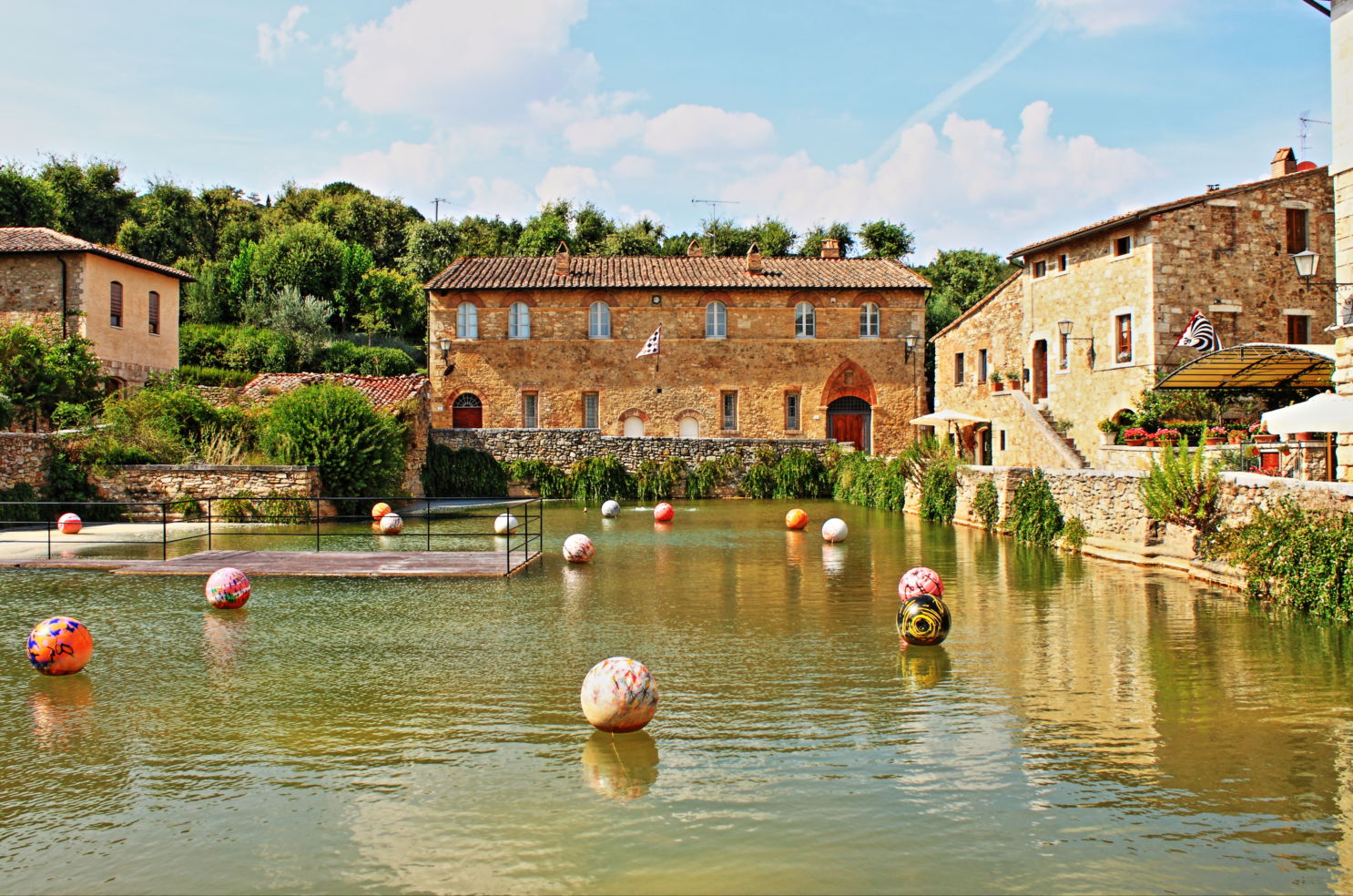 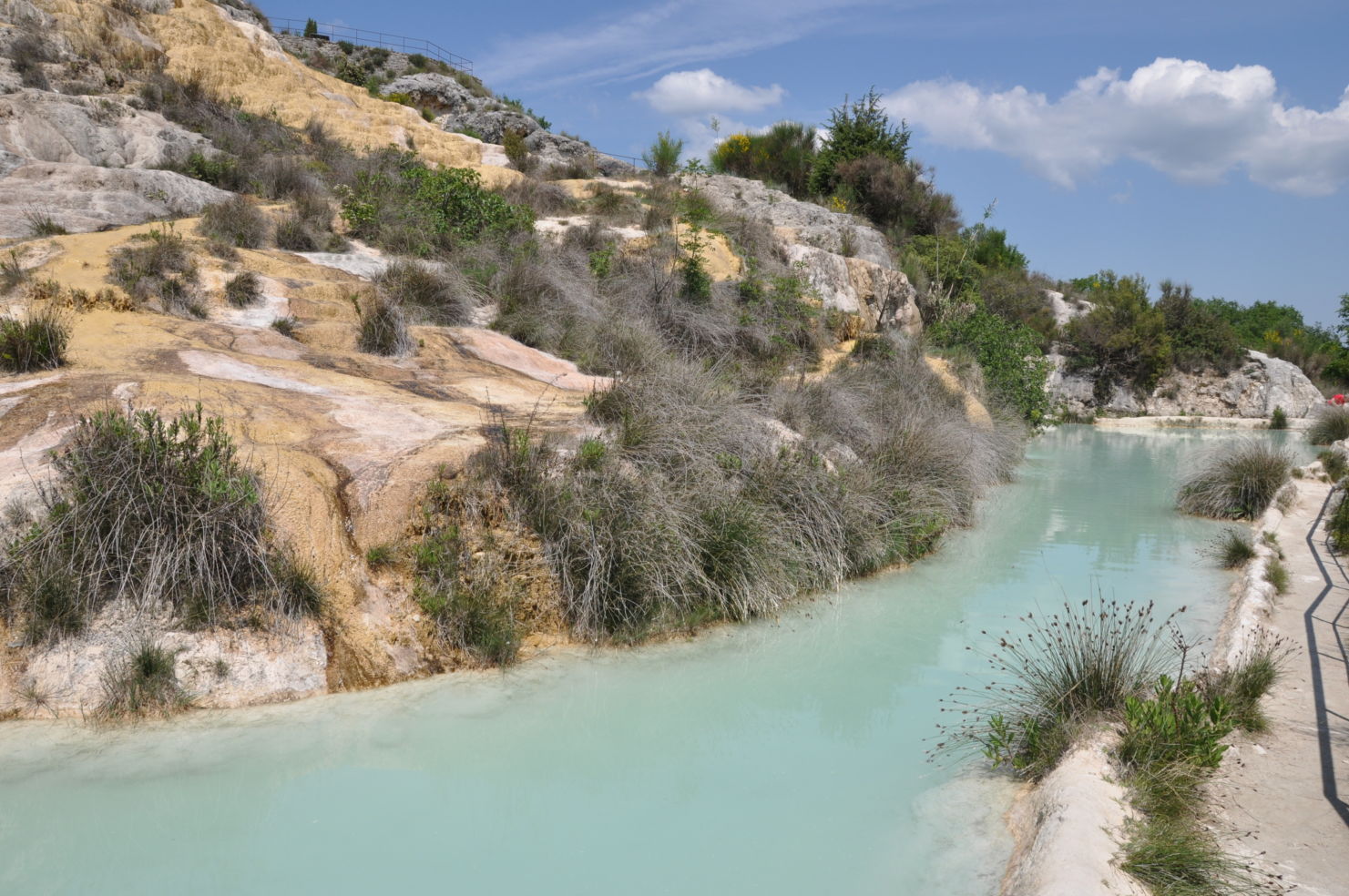 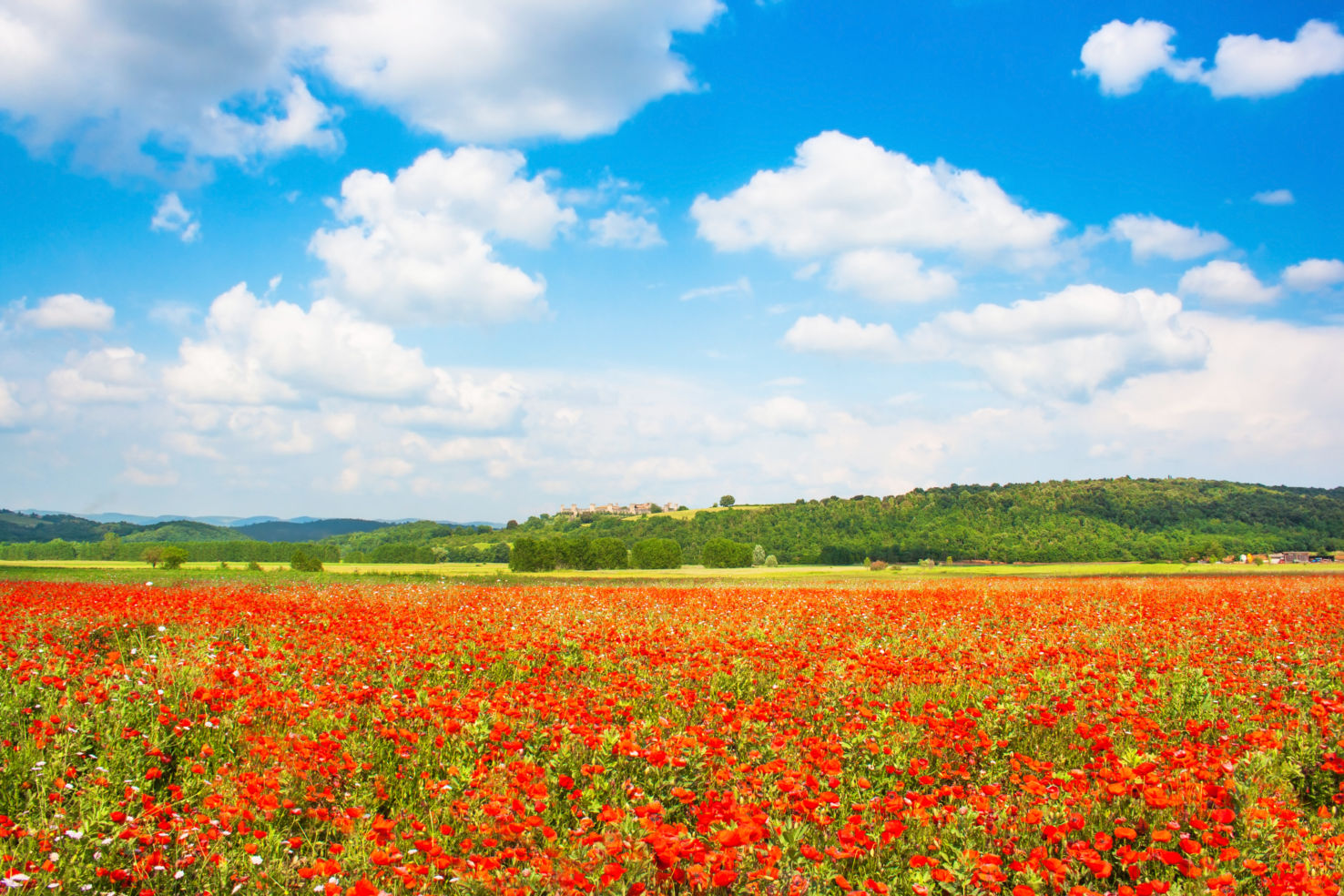 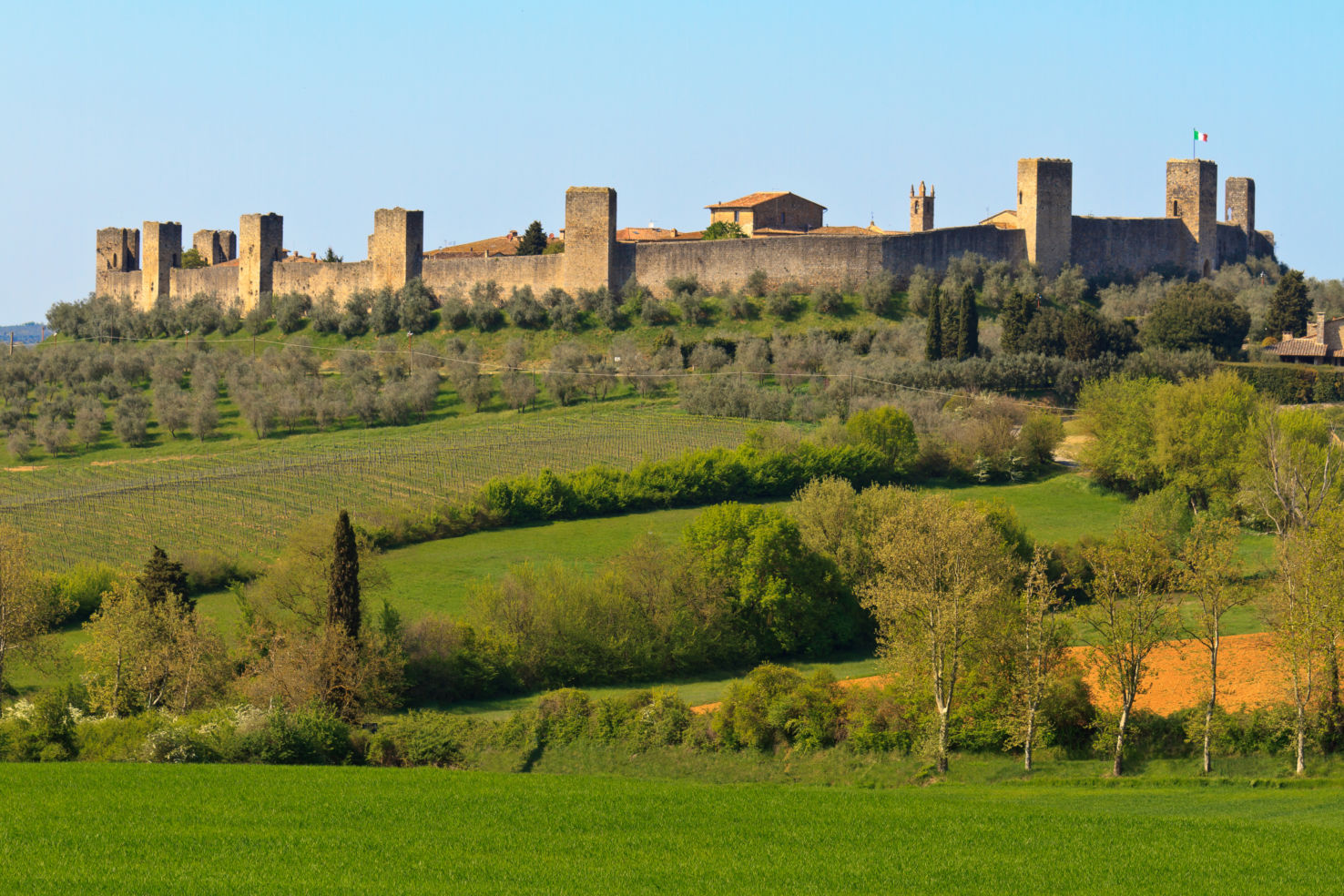 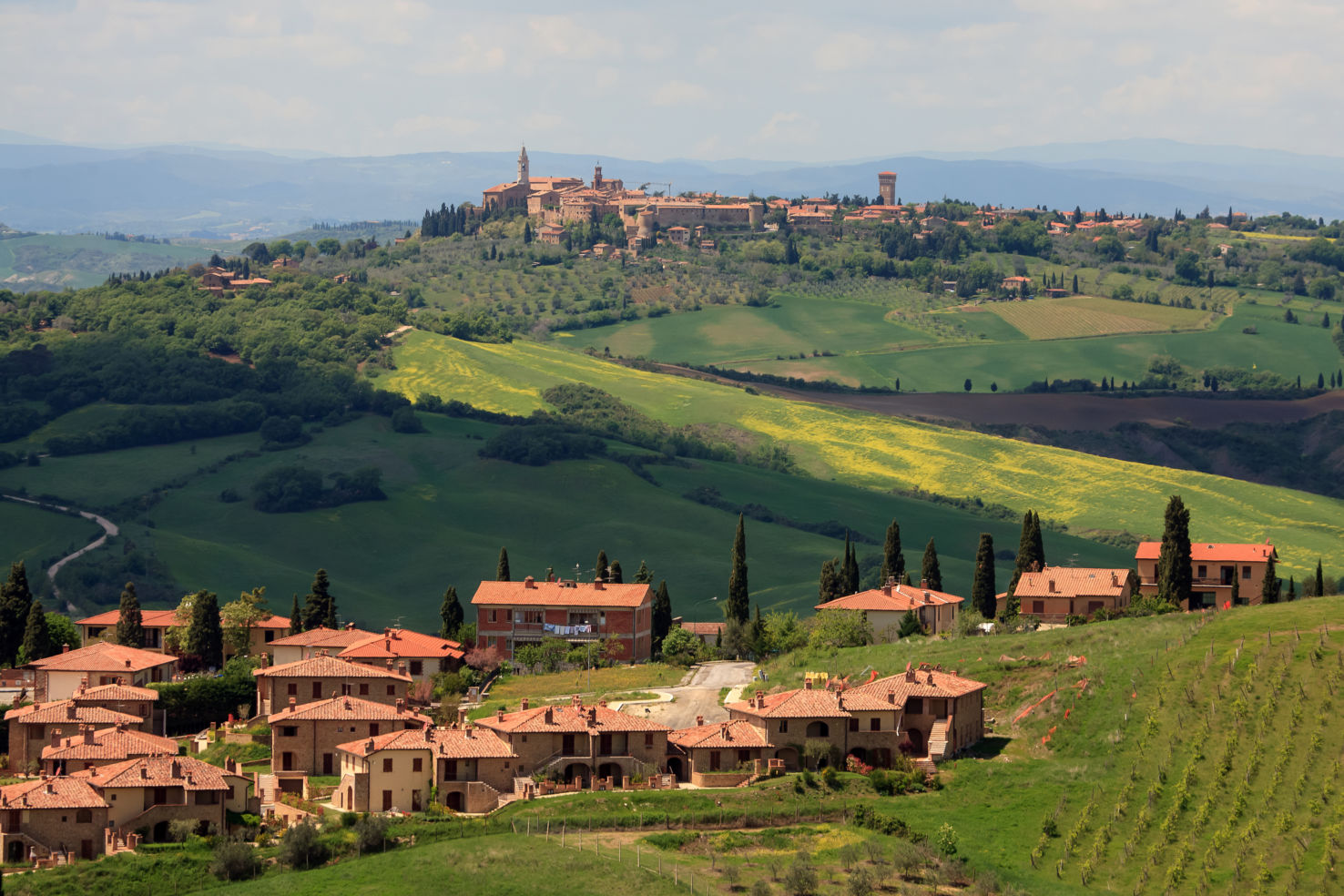 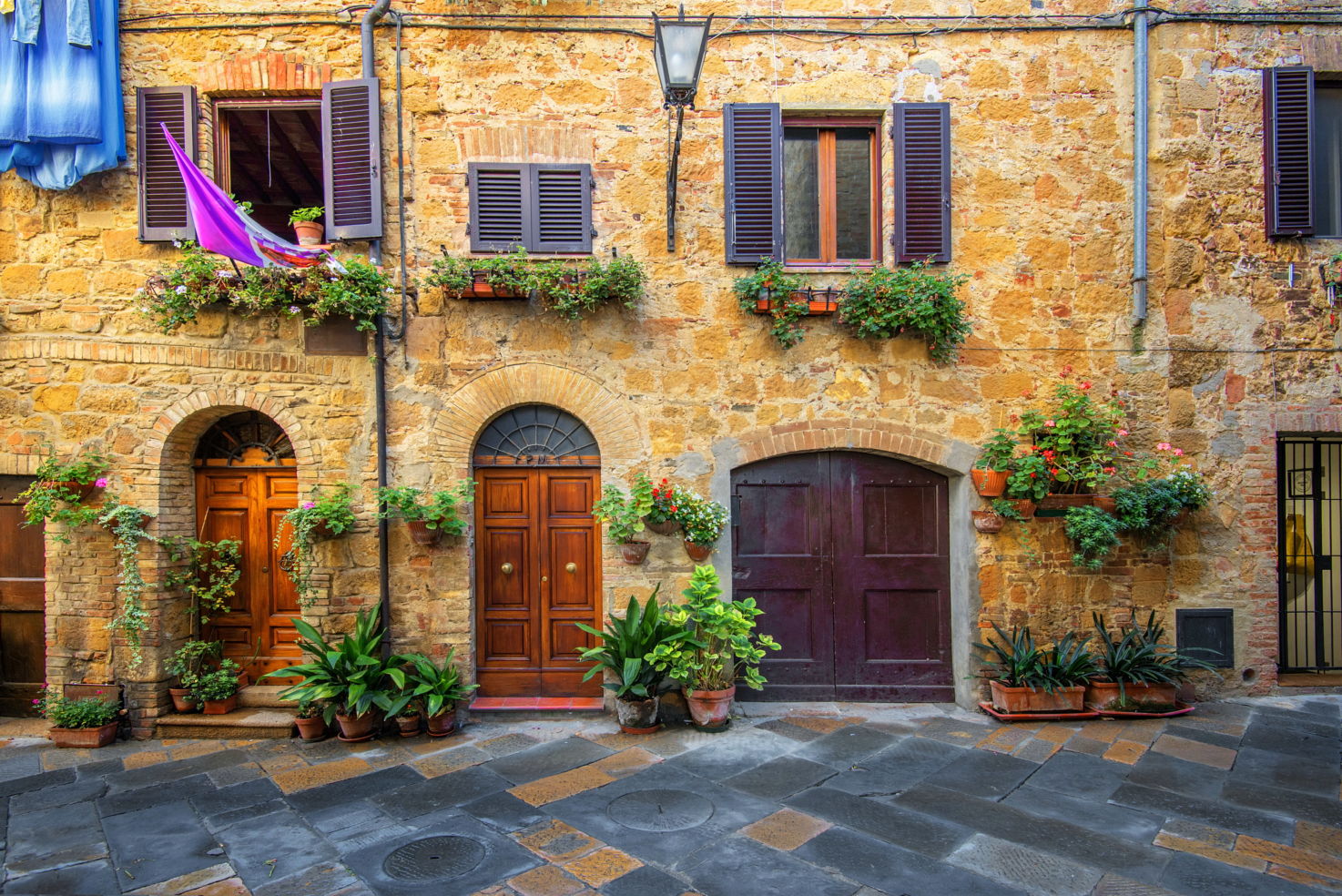 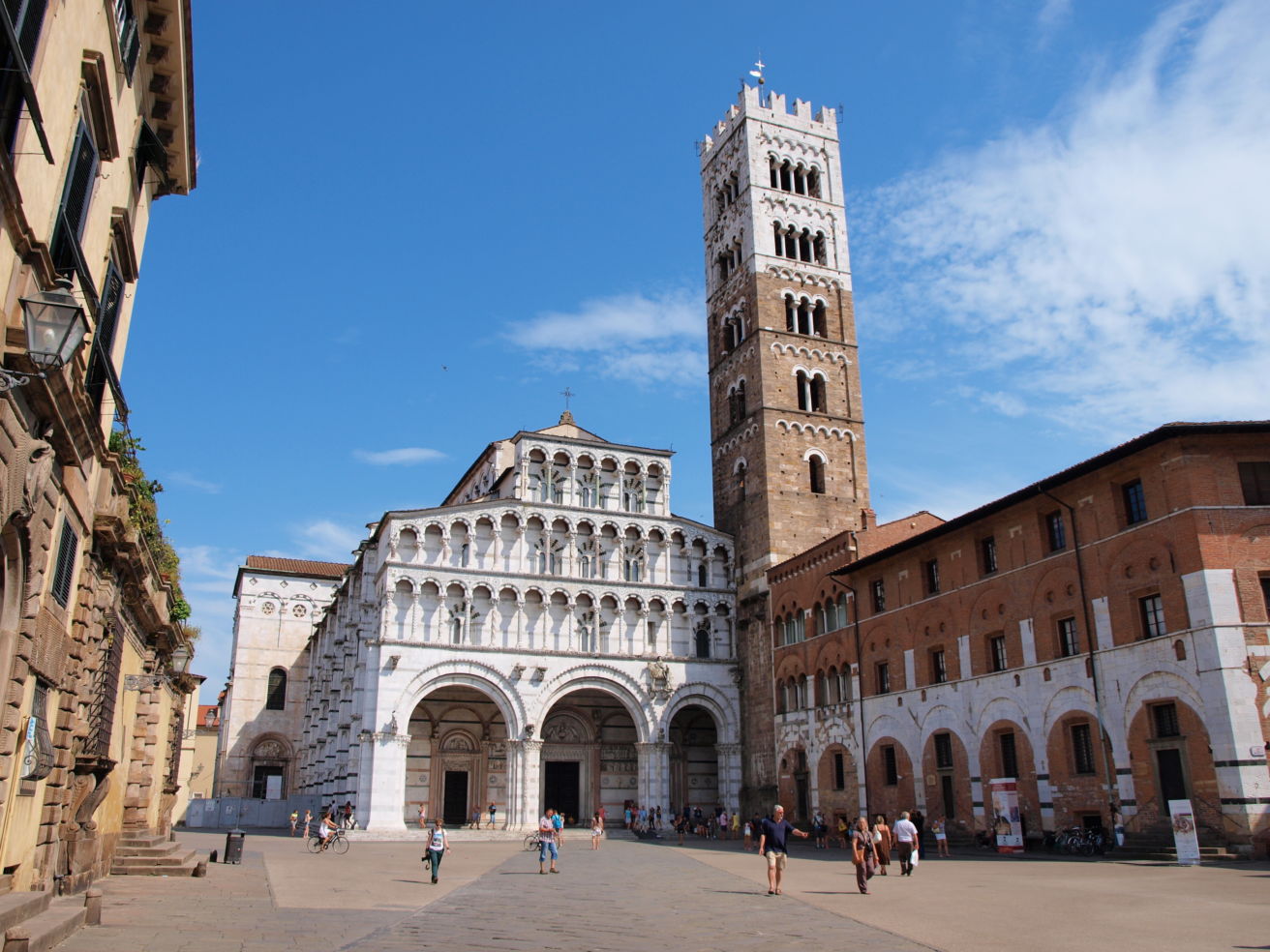 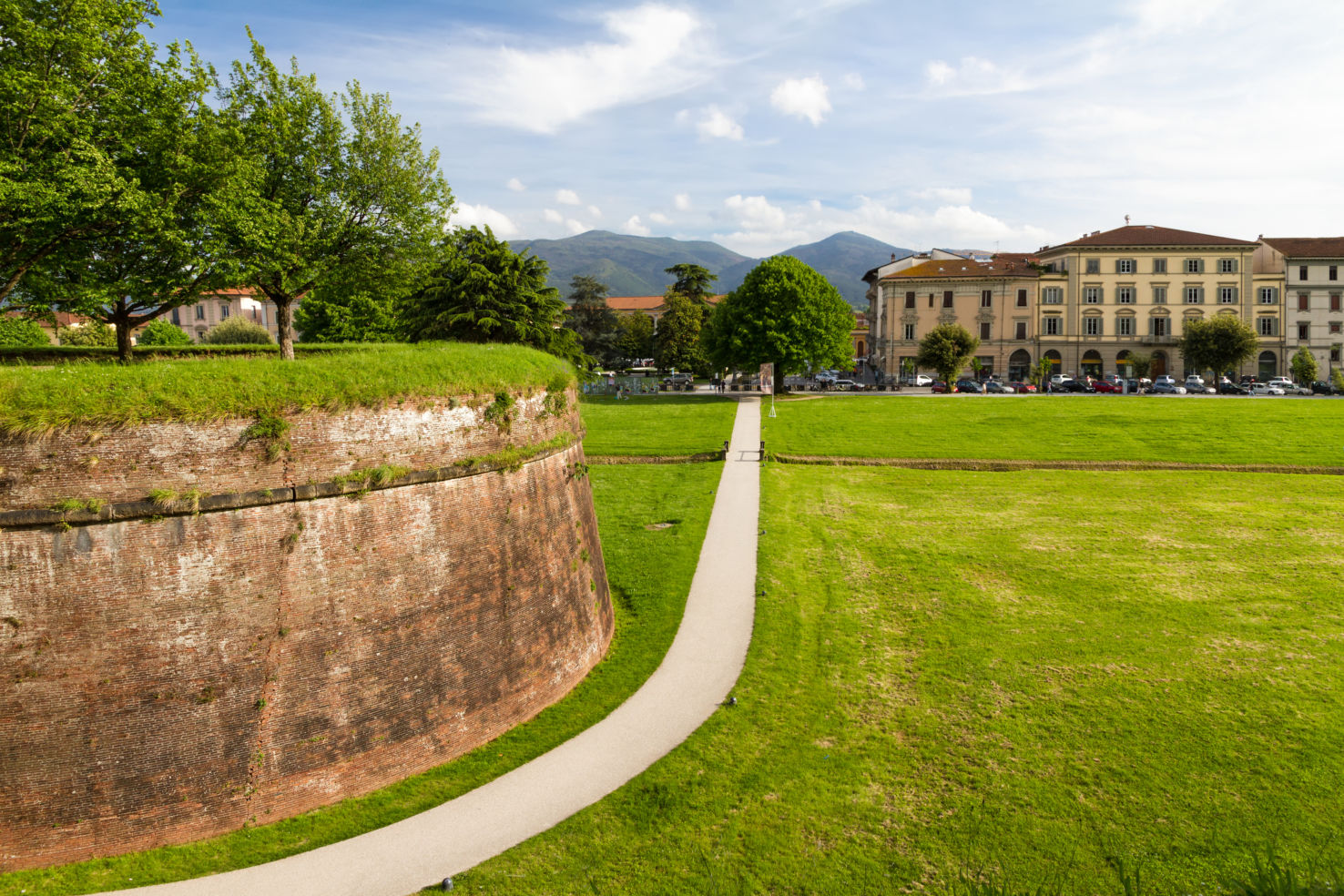 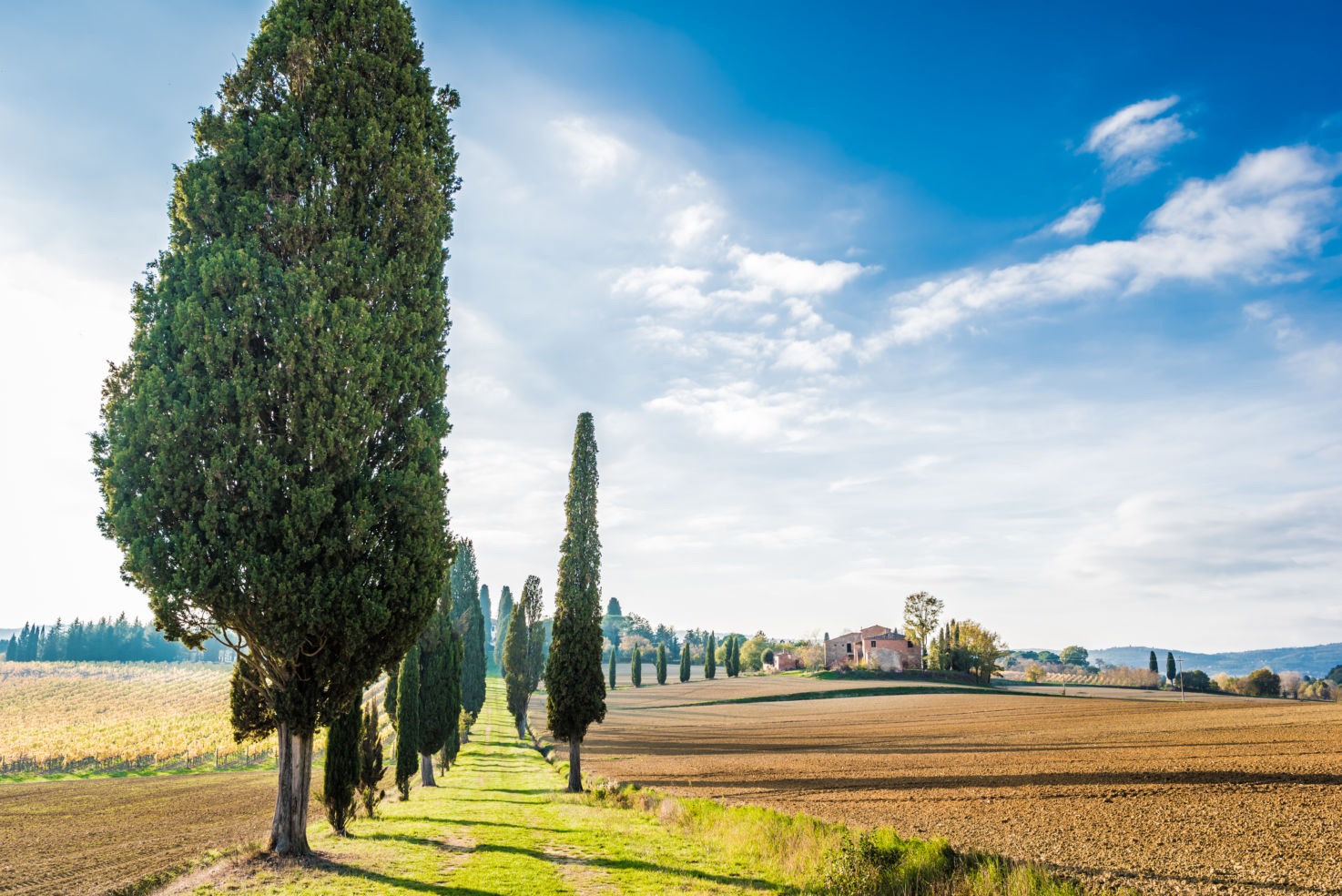 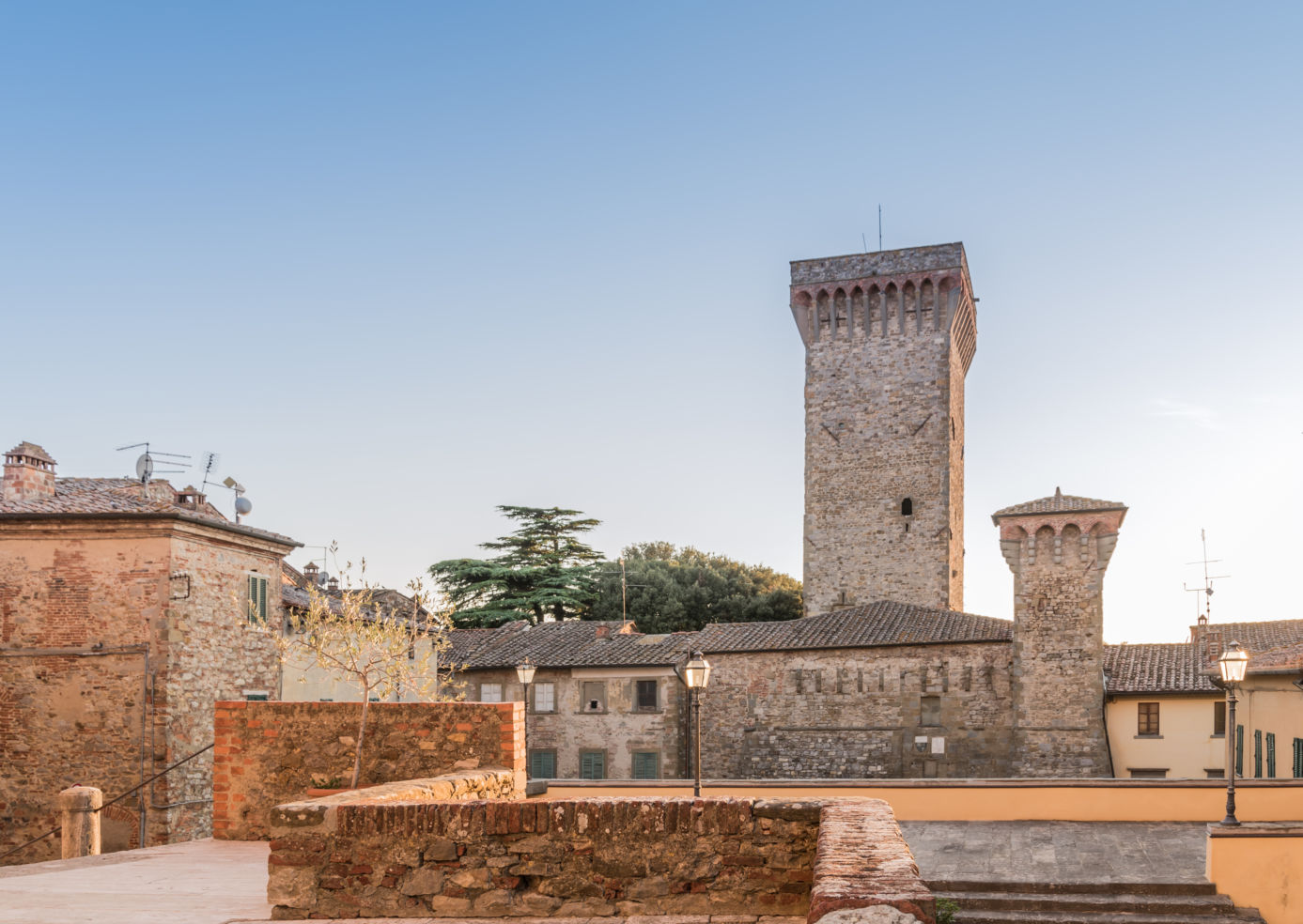 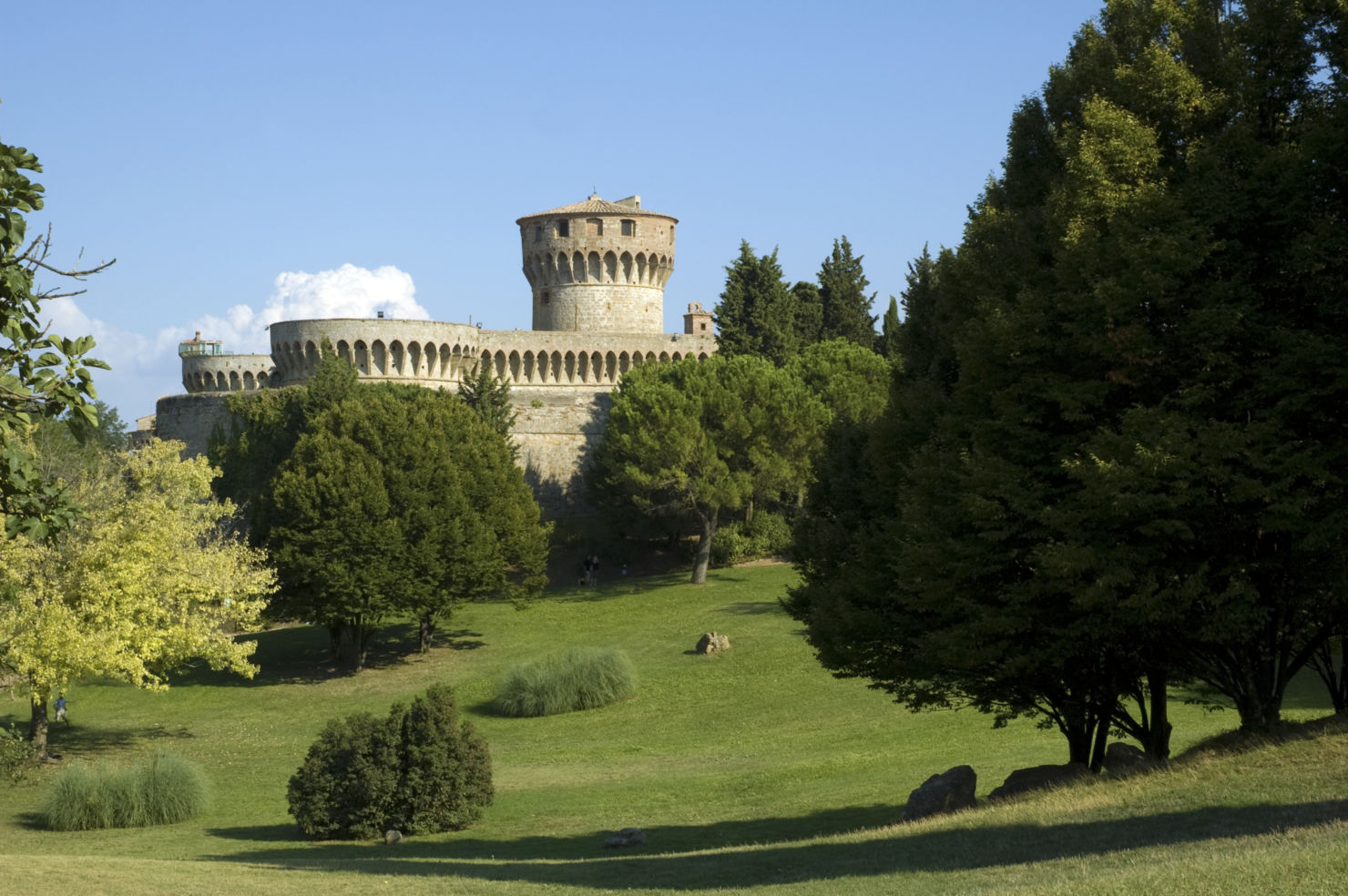 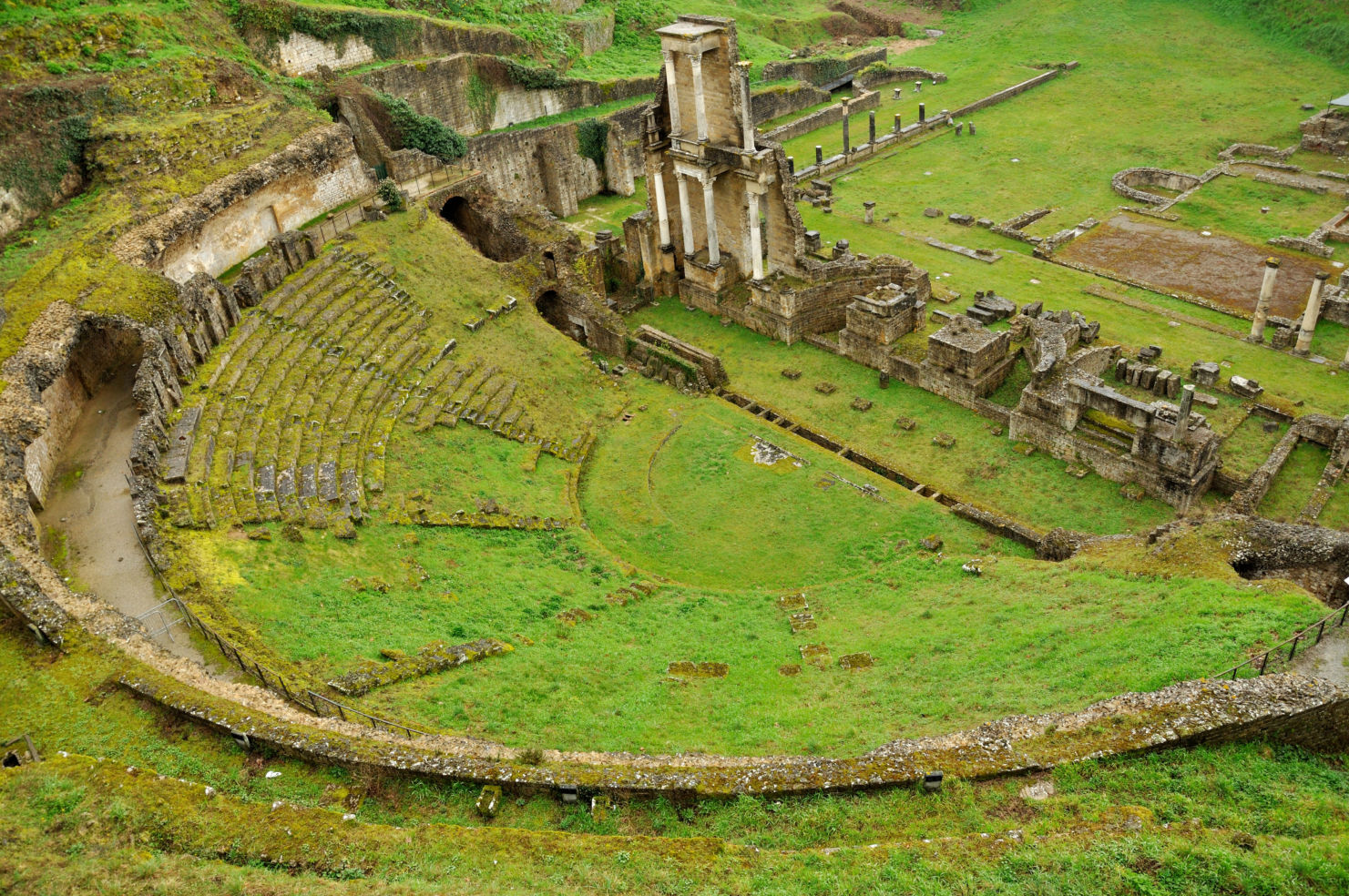 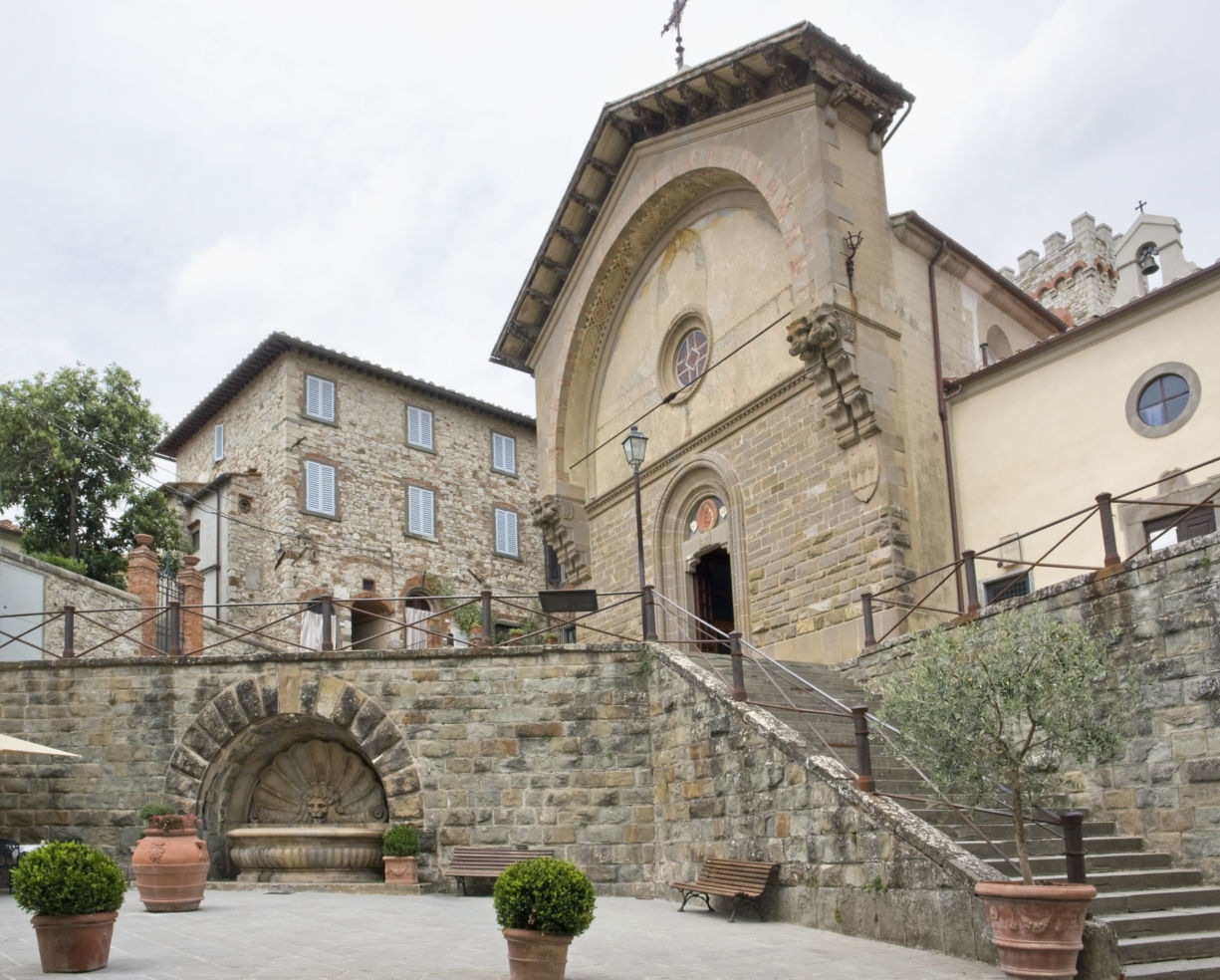 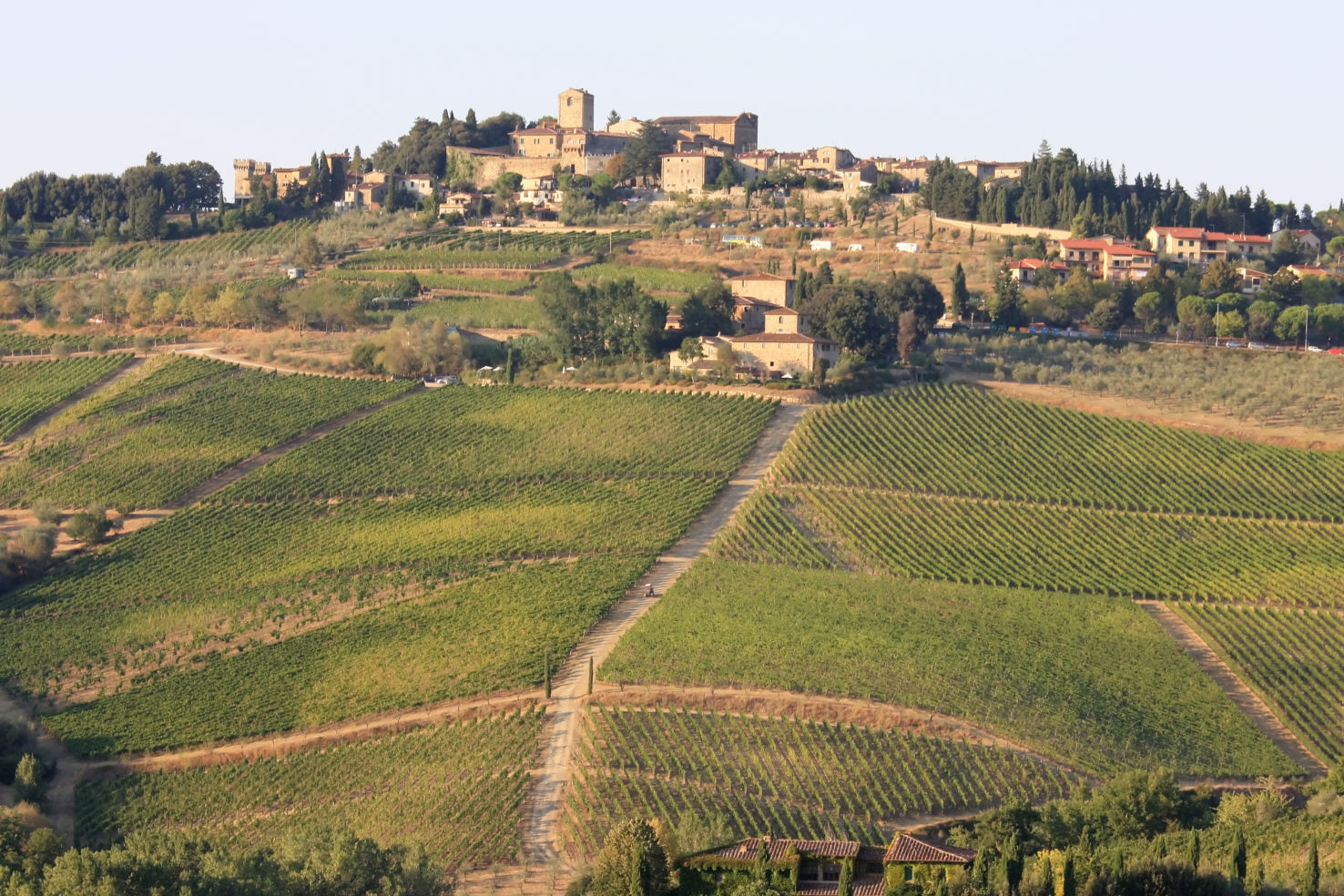 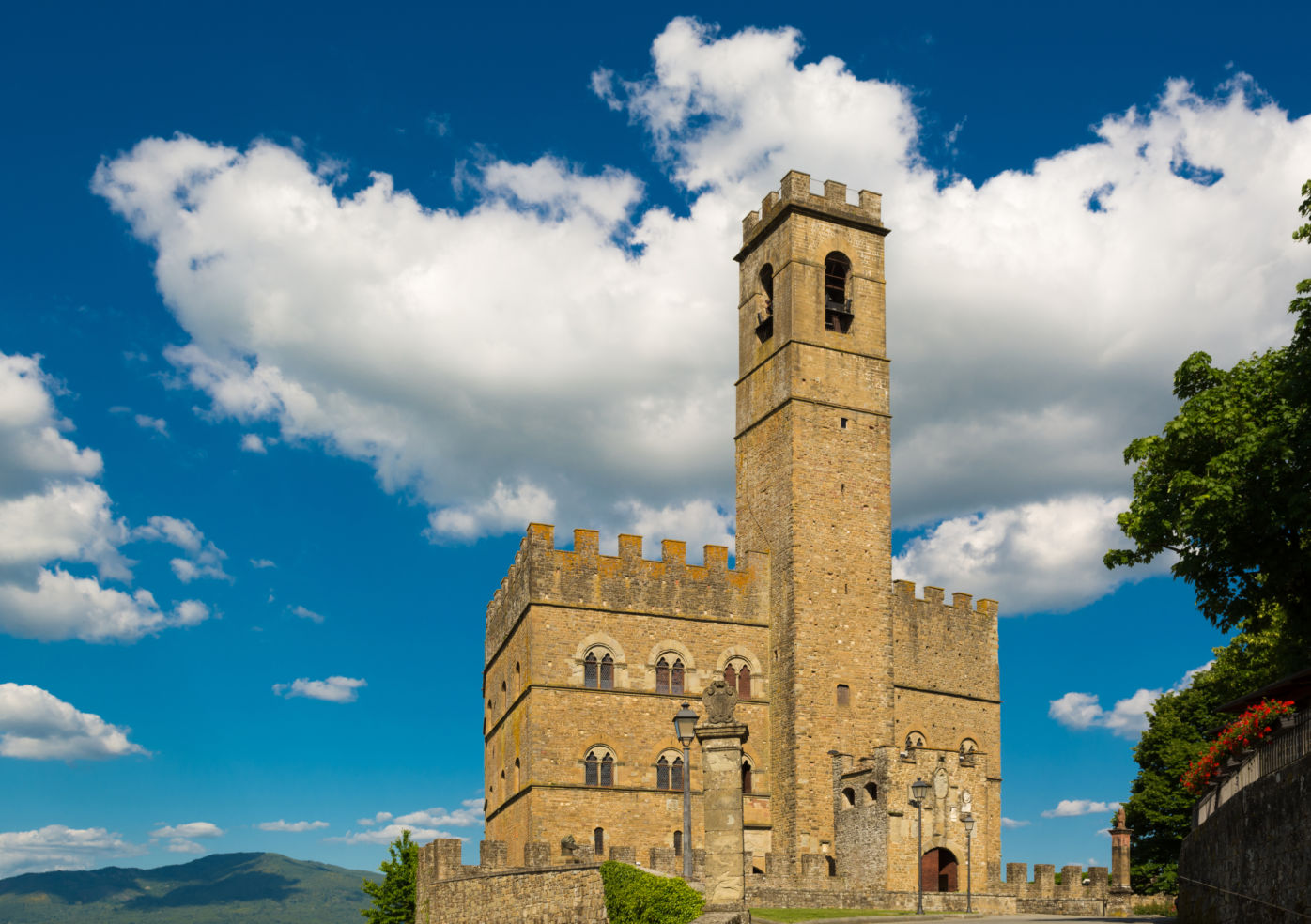 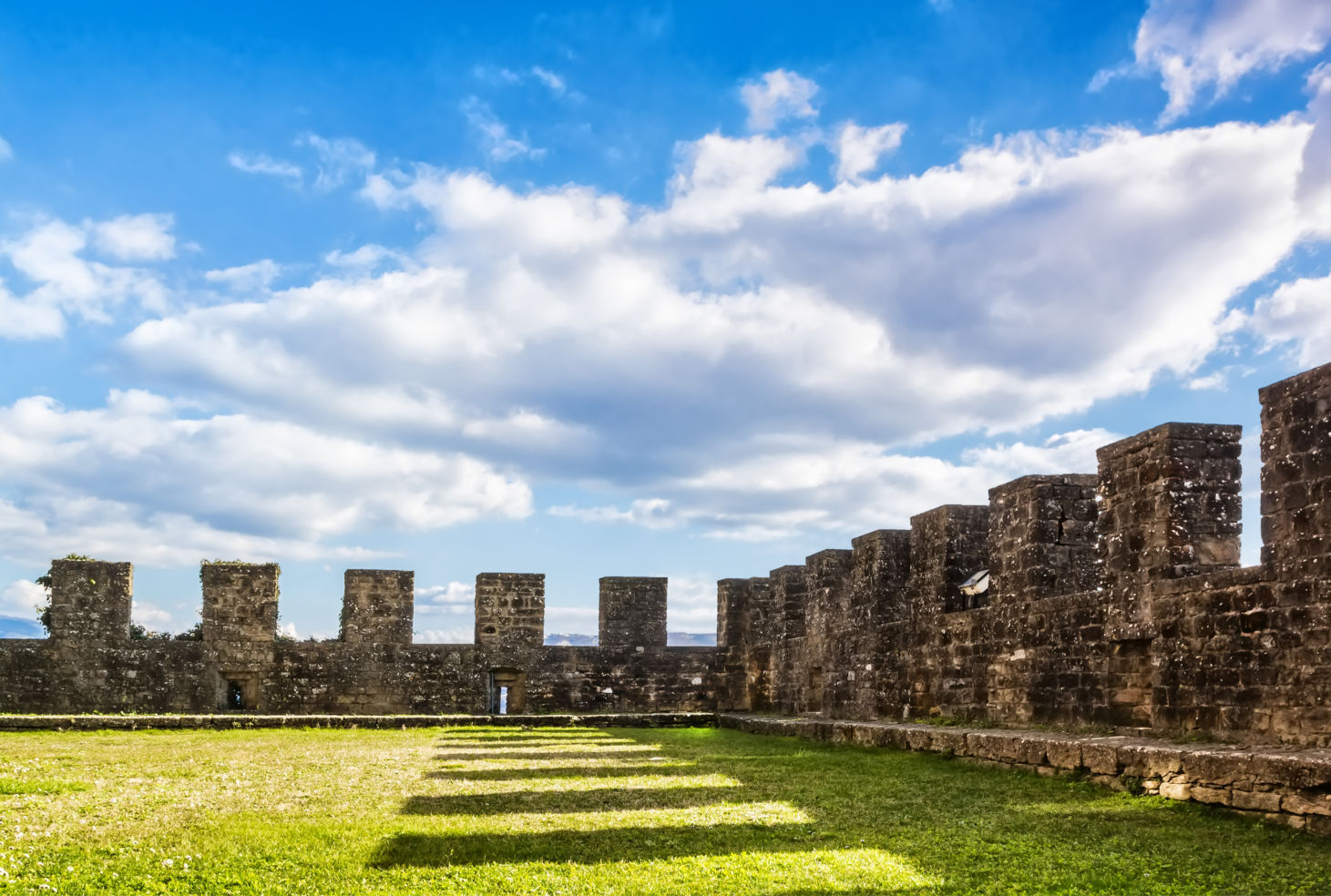 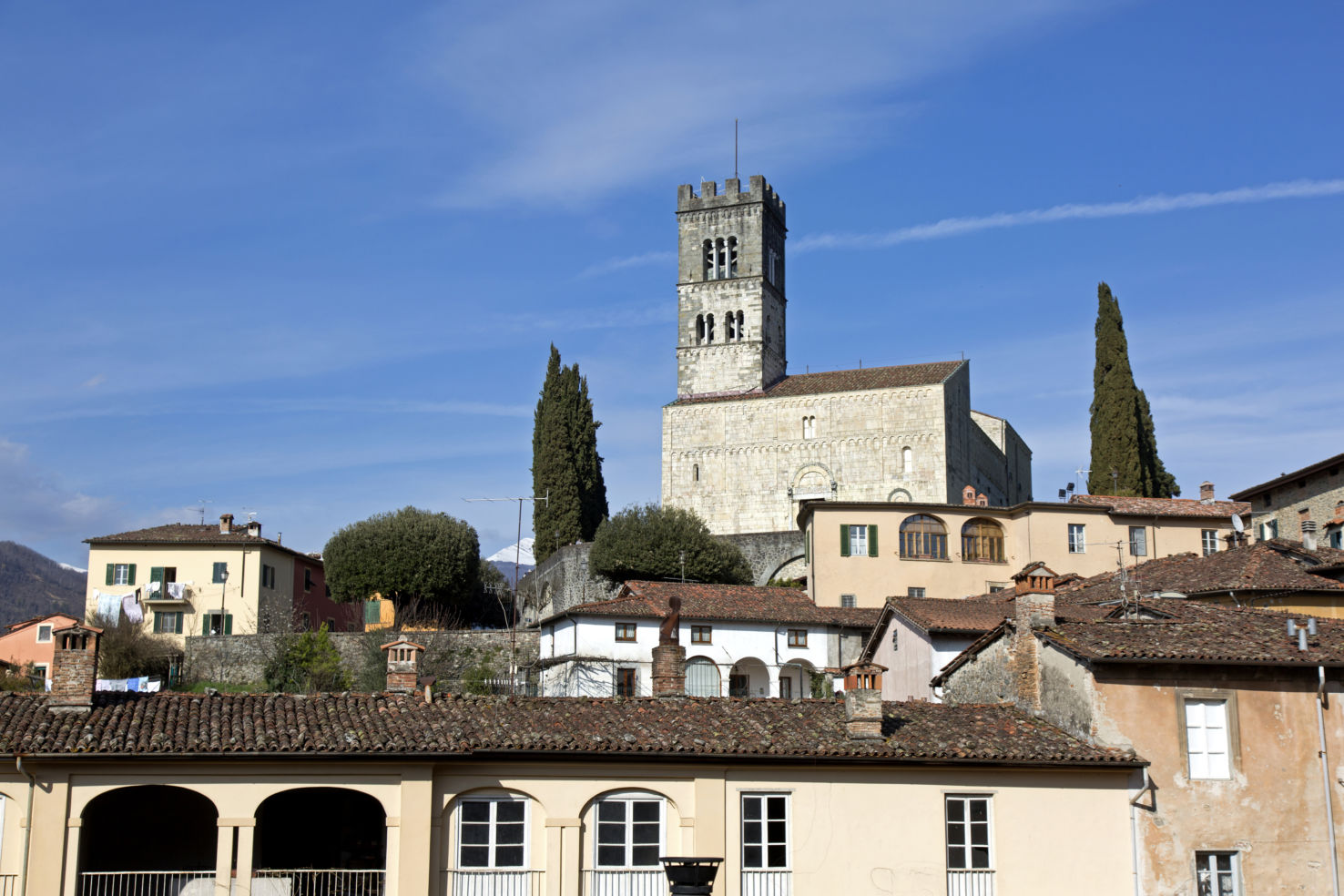 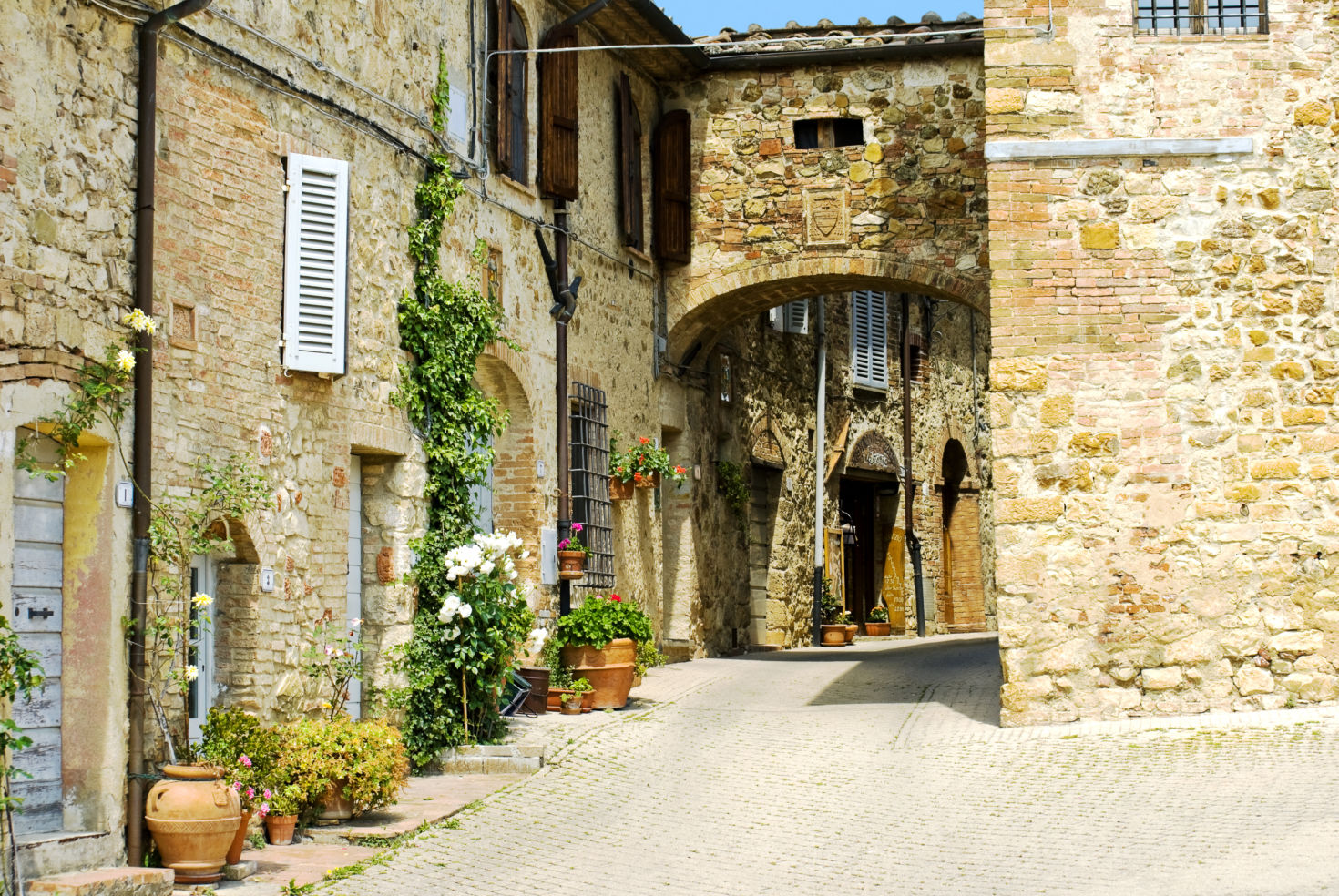 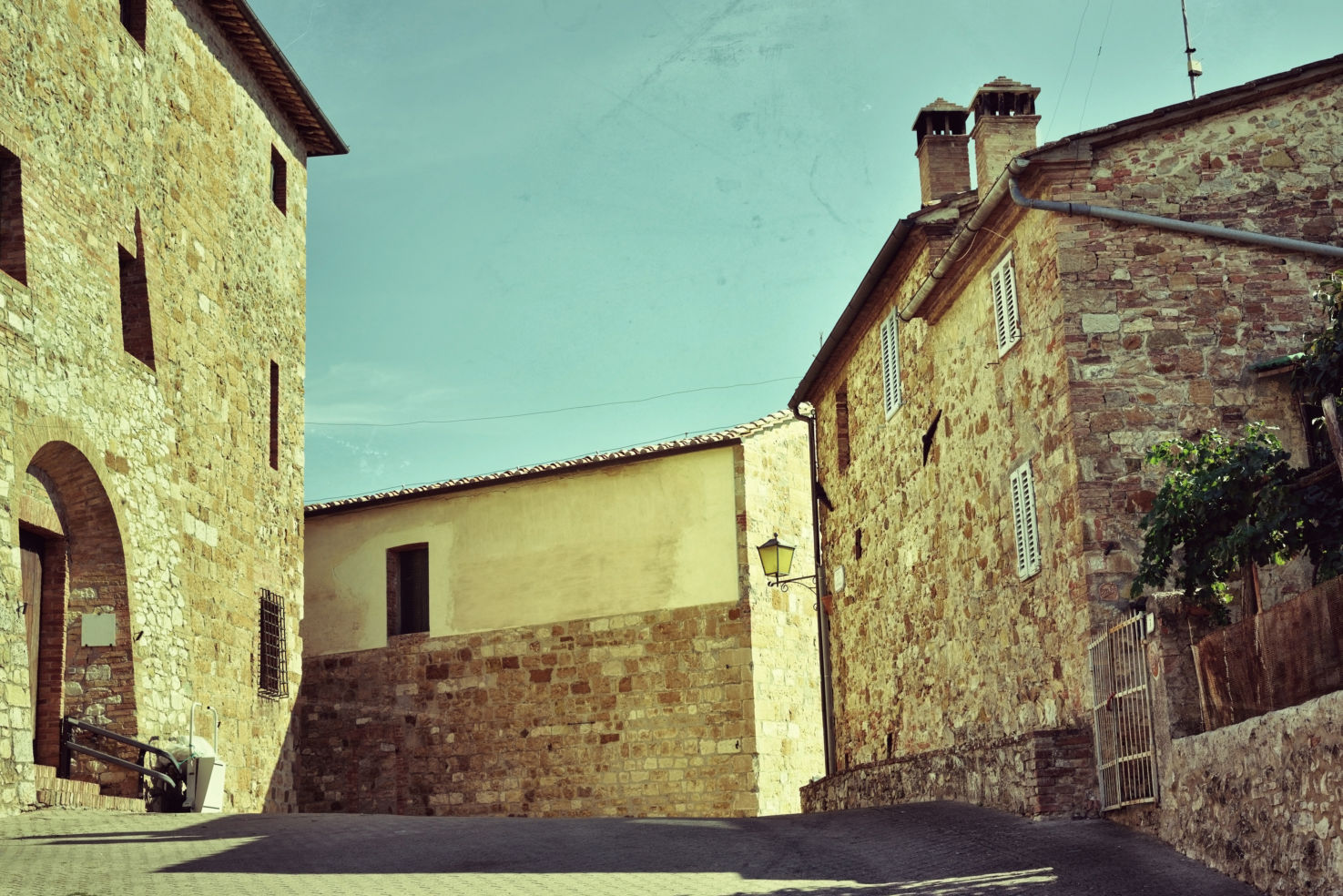 BAGNO VIGNONI (continued): Stroll around the little town and you’ll feel like you’re starring in a Fellini film. The town’s spa hotels control much of the local wellspring water, but the nearby Parco dei Mulini offers visitors a chance to take a free swim in the shadows of the ancient millworks built into the volcanic cliff face.

MONTERIGGIONO: On a hill just off of the Firenze-Siena highway, between those two cities, sits Monteriggioni, an idyllic, walled castle town. Nearly perfectly preserved from its 13th century beginnings, its sturdy walls boast 11 watchtowers that survey the land in all directions. Given its strategic position, Monteriggioni was an object of great conflict between the opposing forces of Siena and Florence in past centuries.

MONTERIGGIONI (continued): Inside the castle-town, visitors can climb stairs to walk the walls, try on medieval armor in the Armament Museum, and explore local artisans’ wares, like the handmade wool goods at the weavers’ shop. While the town is heavily visited in the summer months, a walk around Monteriggioni in the off-season is a peaceful, magical step back into time.

PIENZA: One of the iconic Tuscan foodstuffs is pecorino, a sheep’s milk cheese. Pecorino di Pienza (made from a breed of sheep particular to the vicinity) is generally regarded as Tuscany’s finest. The delicious aroma of this artisan cheese permeates the town, and not surprisingly, Pienza’s many fine restaurants feature this staple on their menus alongside handmade pastas and other traditional plates.

PIENZA (continued): Yes, the cheese alone is worth the trip, but it’s also important to note that Pienza, a beautifully preserved and adorable medieval town, is a UNESCO World Heritage Site. Its outer walls include a walkway from which visitors can admire the sweeping beauty of the Val d’Orcia, an expansive river valley dominated by the once volcanic Monte Amiata. Zefirelli’s 1968 classic “Romeo & Juliet” was filmed here, and a moonlight stroll through these ancient streets makes it easy to see why romance comes to mind here.

LUCCA: This is the largest of the towns we’ve listed here, but its beautiful old centro is literally walled off from its modern outskirts. One of Lucca’s town squares is the oval-shaped Piazza Anfiteatro, built on an ancient Roman amphitheater. assic “Romeo & Juliet” was filmed here, and a moonlight stroll through these ancient streets makes it easy to see why romance comes to mind here.

LUCCA (continued): What makes this medieval village unique is its town wall, which dates to the 16th century. The nearly 40-foot high ramparts are wide enough in most spots for two cars to pass each other. You won’t see any cars on them, though; the walls are instead the best beltway road ever, a tree-lined pedestrian and cycling path that encircles the centro and offers views of the entire city. It’s easy to descend from the wall at points in the circuit to explore the interior’s many sights, shopping options, and delicious Lucchese food and wine.

LUCIGNANO: Perched on one of eastern Tuscan’s many hilltops southwest of Arezzo, this well-preserved medieval walled town is constructed like a three-tiered wedding cake. Its town square and 13th-century fortress sit on the top level, with the lower levels laid out below in concentric rings of narrow stone streets. ese food and wine.

LUCIGNANO (continued): A walk through Lucignano’s cobbled and shady ancient pathways is quiet and peaceful. That’s a great contrast to its history, when the forces of Arezzo and Florence, much larger city-states, fought for control of this valuable piece of real estate for many years.

VOLTERRA: A fortified hill-town in the west of Tuscany, Volterra’s imposing Medici fortress is visible from miles around. Every August the town hosts Feste Volterra 1398, one of the region’s largest medieval festivals. The entire centro is dressed up as it would have been at the end of the 14th century, and so are the people. Bands of uniformed drummers and flag-throwers perform in the town square, vendors in period dress hawk medieval-style food like roast meats and stone-oven breads, craftsmen work wood, leather, and metal with era-appropriate tools, and historical experts demonstrate weaponry and falconry. Shopkeepers’ storefronts display 14th-century-style signage and visitors change their modern currency for replicas of medieval coins to spend at the food stalls and vendors’ displays.

VOLTERRA (continued): The town is also home to a large ancient Roman theatre that was only unearthed and restored in the 1950s. Before that it was covered with centuries’ worth of garbage, as it was once used as the town’s dump.

RADDA: Nestled in the famous vineyard hills of the Chianti region, Radda offers stunning views of the surrounding vine-covered valleys.

RADDA (continued): The town is a embarrassment of riches when it comes to excellent eating - and drinking of course! The rich display of medieval and Renaissance architecture and the centuries old dark, mysterious walkways under many buildings are other attractions.

POPPI: This castle town sits atop a hill in the Casentino region to the northeast. The huge towers of this iconic 12th-century castle dominate the valley landscape for miles around; consequently, the 360-degree views from the castle’s interior are jaw-dropping.

POPPI (continued): The castle, also a museum, overlooks the walls of the town’s centro, which is a treasure-trove of historical monuments and ancient churches. Among them, you’ll find wonderful restaurants serving local cuisine in a lovely setting.

BARGA: Far to the northwest of Tuscany is the forested Garfagnana region. The walled city of Barga is perched on one of the mountaintops. Its historic centro is a car-free zone, making for a quiet and magical medieval refuge from modern bustle.

BARGA (continued): From Barga's cathedral at the top of the town, you can gaze over the wooded valleys and other mountaintop hamlets in the distance. In the summer, Barga, which is, for the most part, one of Tuscany’s lesser known treasures, hosts an internationally renowned jazz festival.

MURLO: Another tiny hilltop town surrounded by the rolling forested hills south of Siena, Murlo is even smaller than Lucignano.

MURLO (continued): The town’s main attraction is a museum that highlights the history of the thriving Etruscan civilization, which predates the Roman Empire in Italy by many centuries until the Romans assimilated them politically and culturally. They left behind a rich trove of architecture and art throughout Italy, as well as their DNA: Scientists have discovered that long-time residents of Murlo have strong genetic links with the ancient Etruscans.

Most who travel to Italy hit Florence, Rome, and the other legendary cities, but there's plenty of unbelievable things to see, eat, and do in the many historic small towns throughout Tuscany.