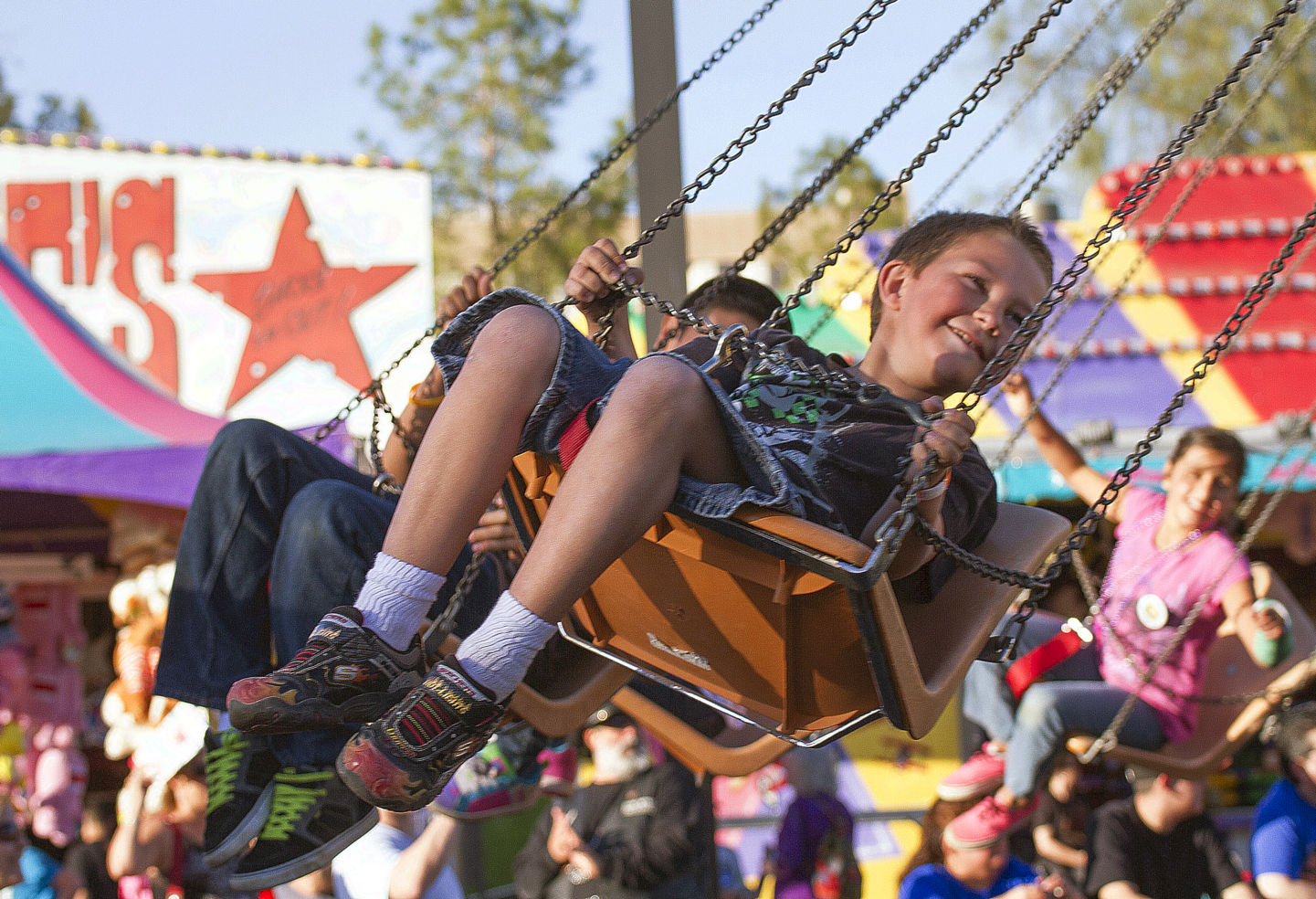 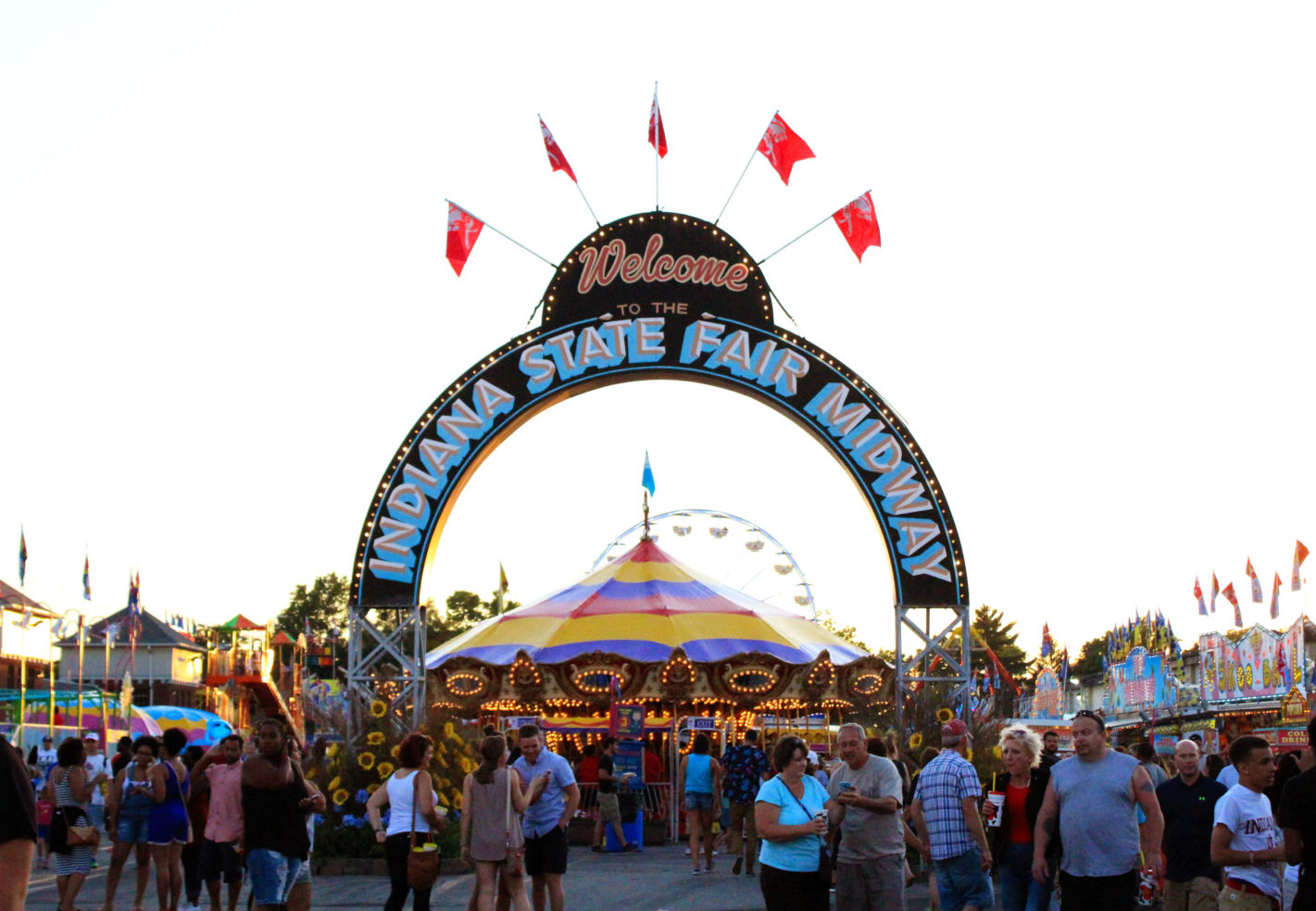 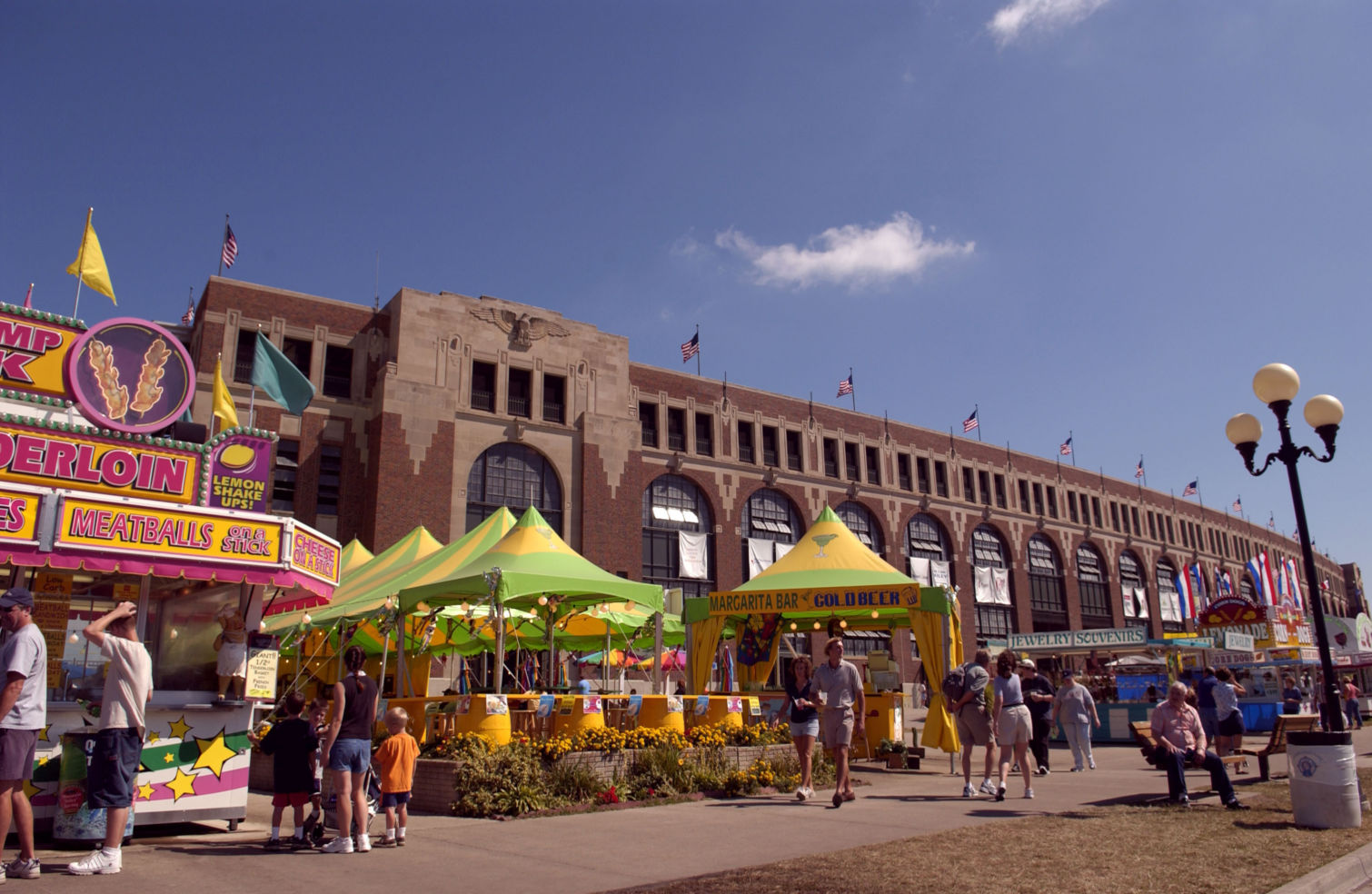 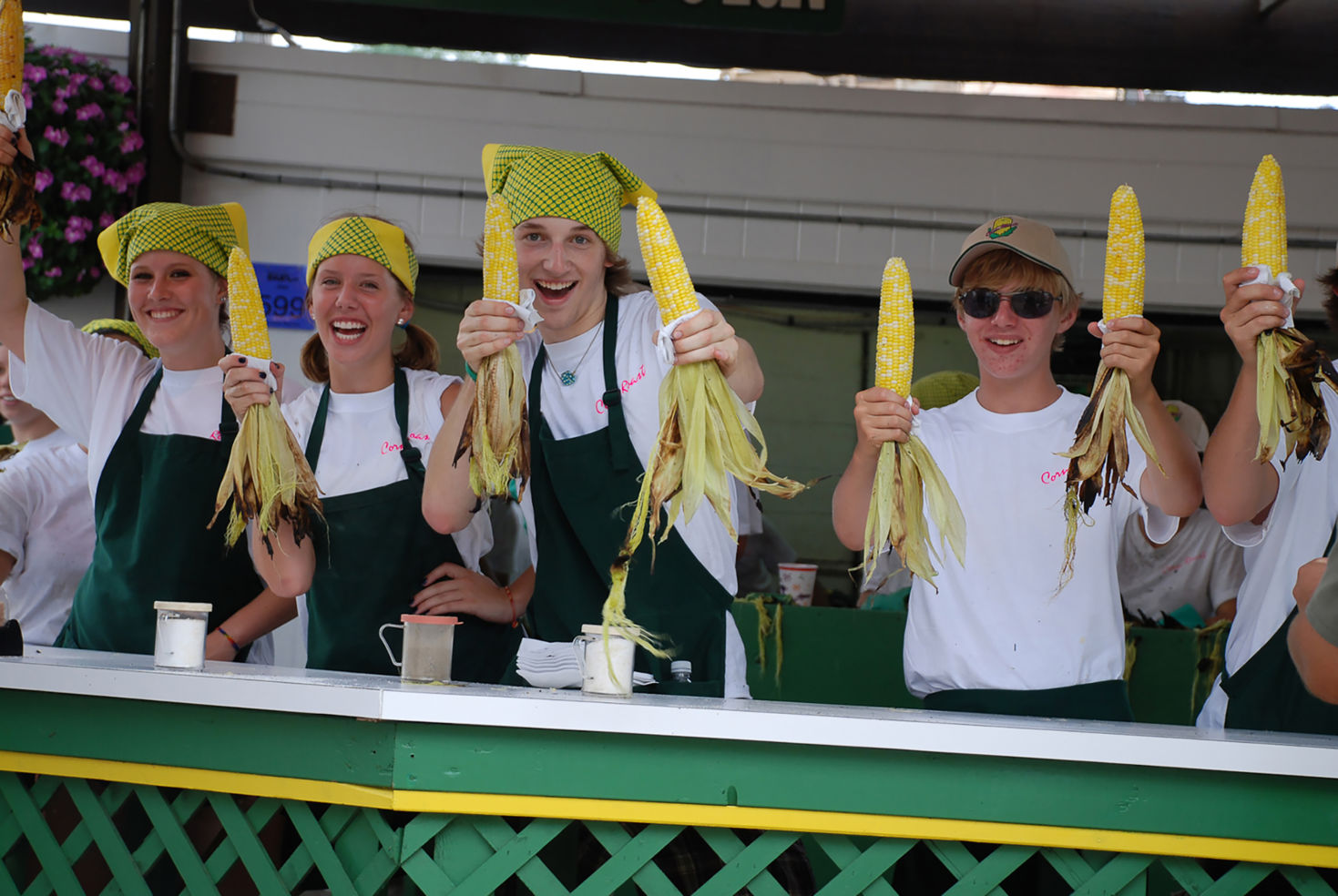 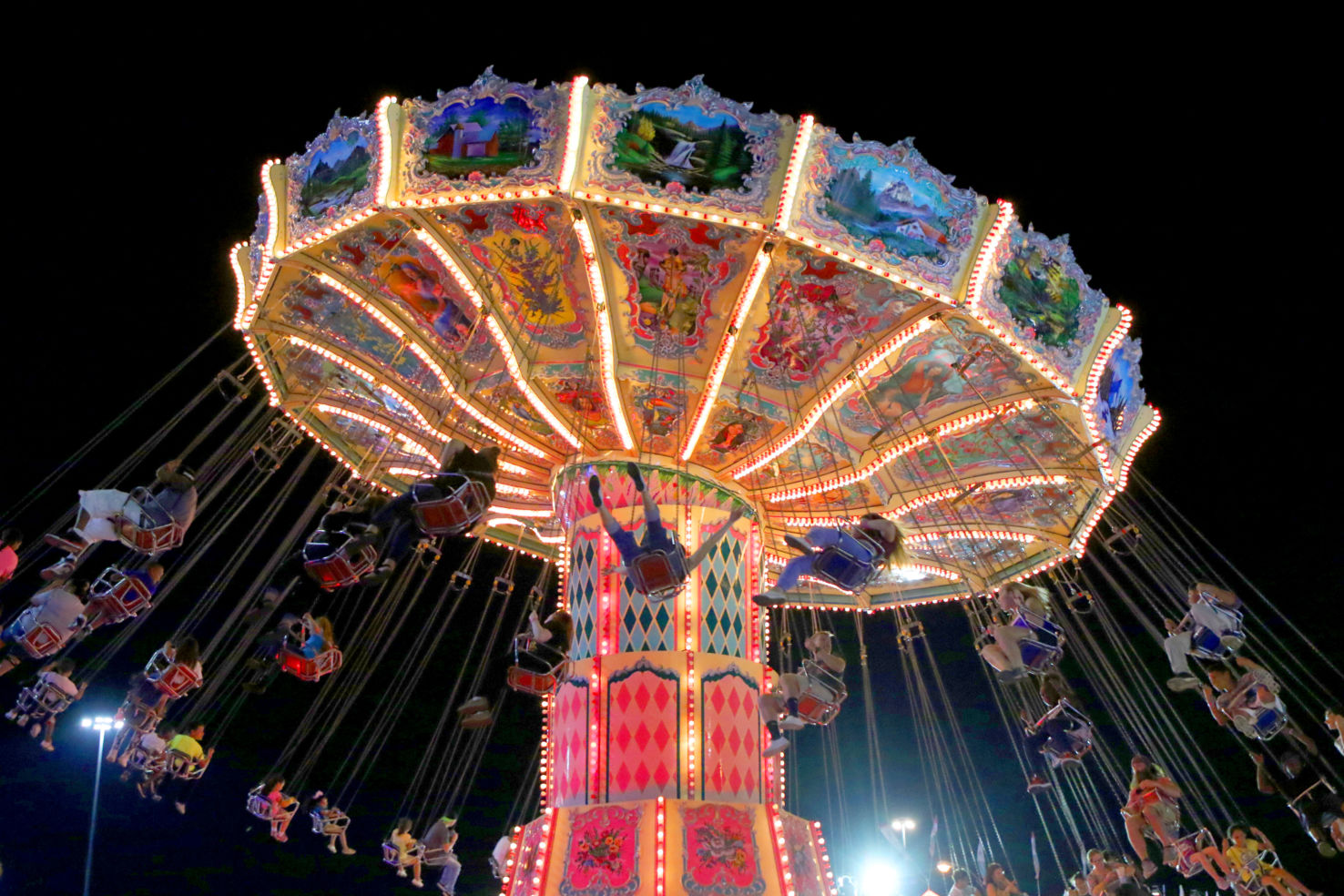 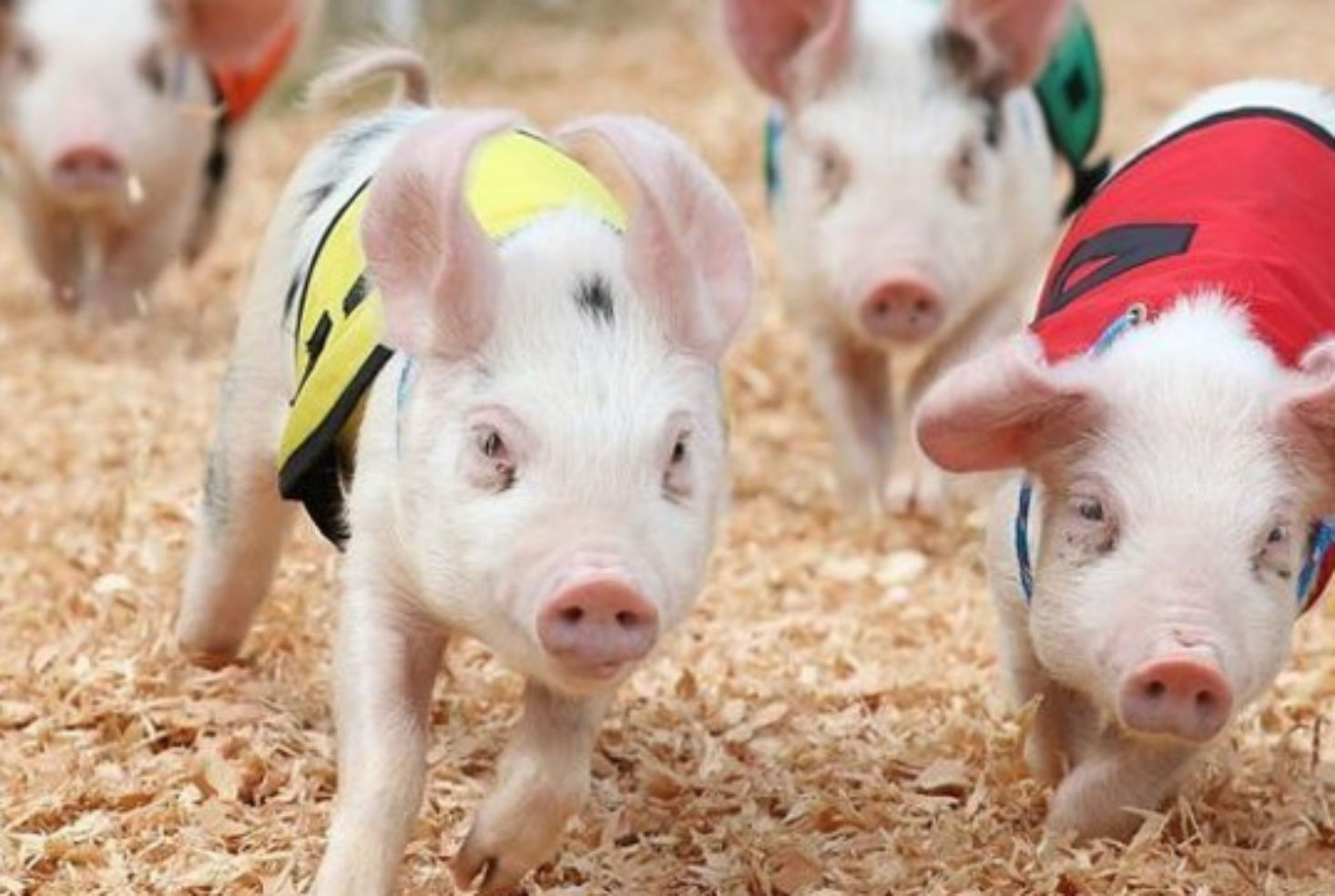 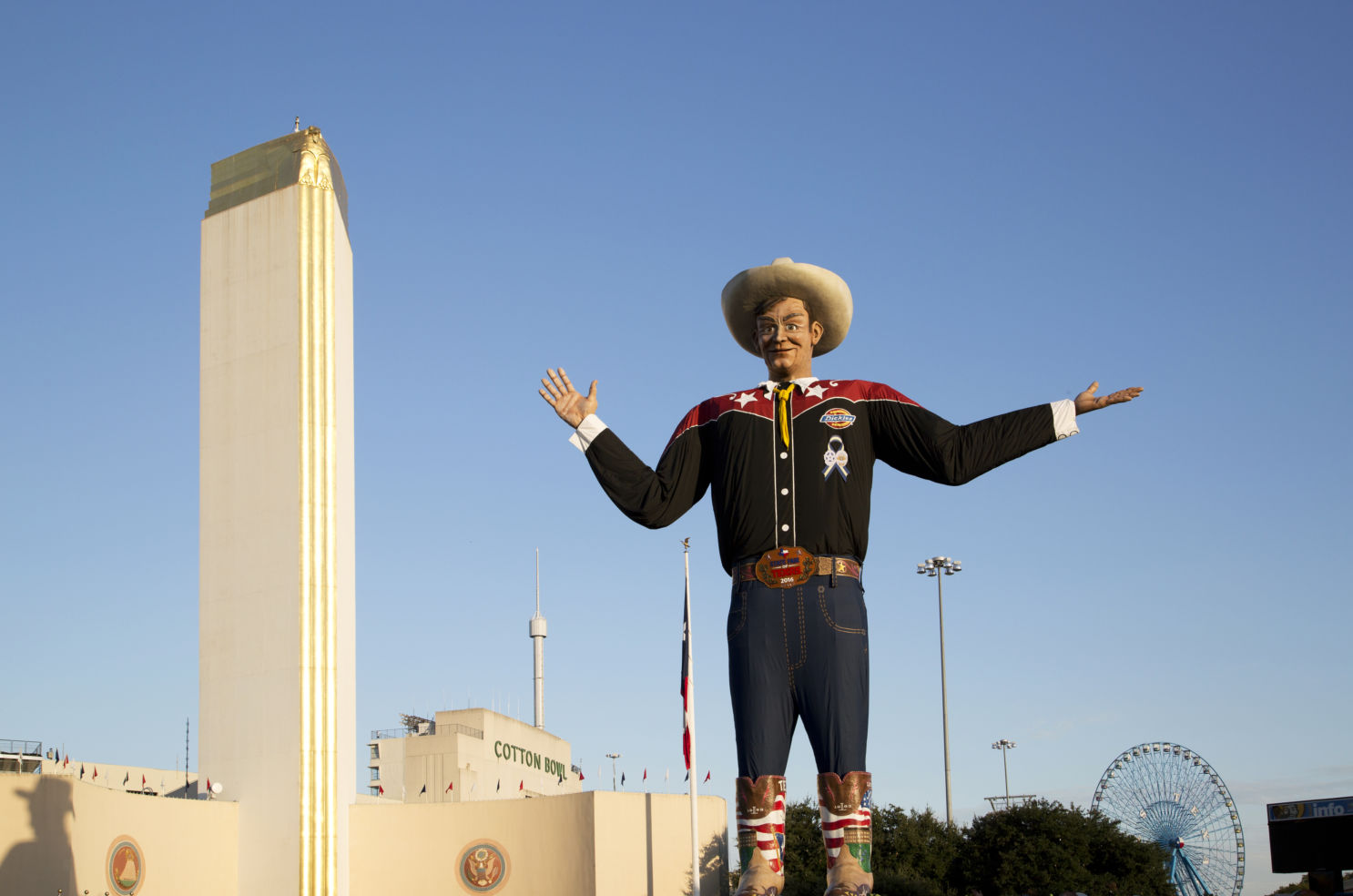 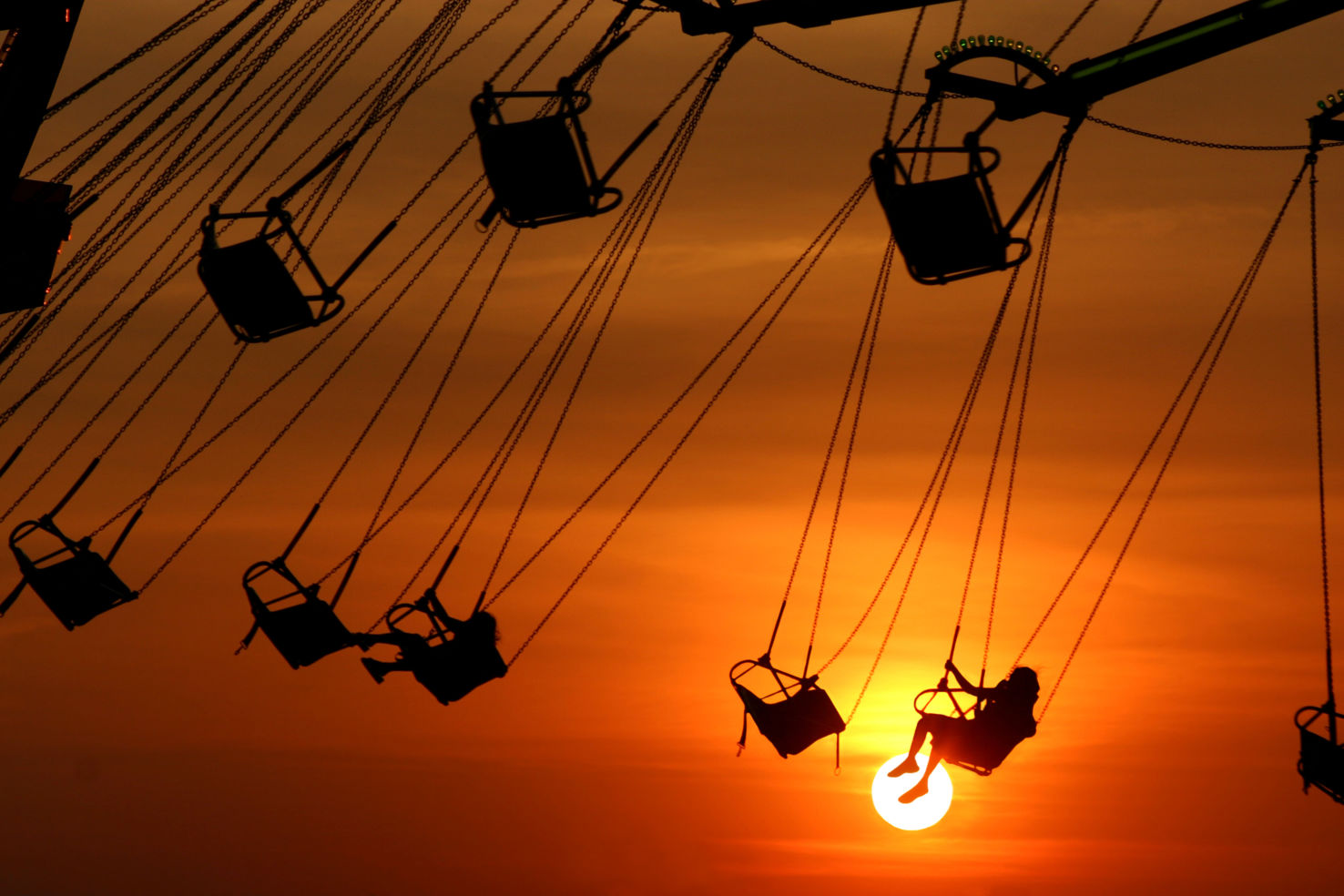 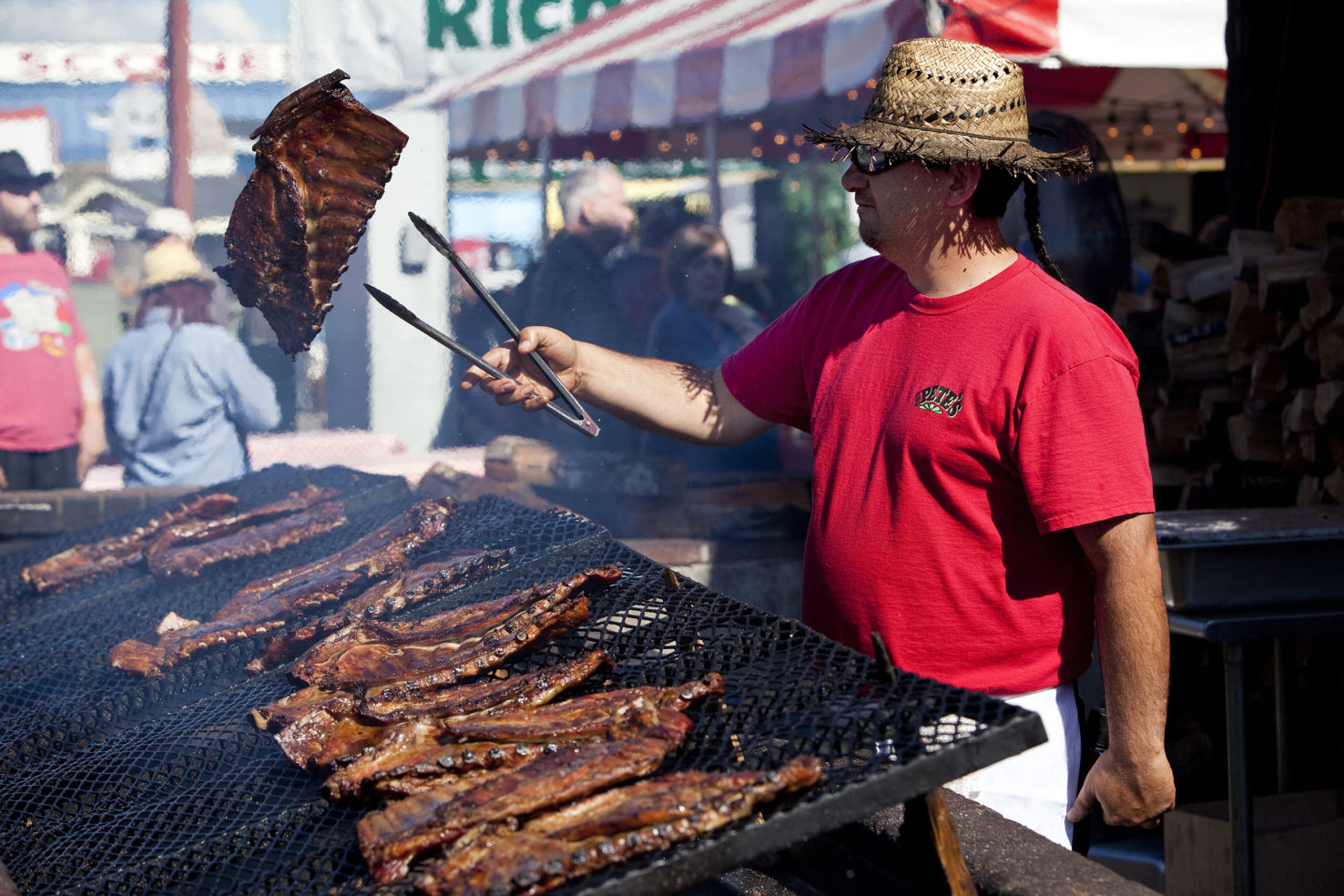 Eat: Stroll the midway chowing down on a Cowboy Cone, a spicy waffle cone stuffed with cowboy beans, brisket or pork, coleslaw, and BBQ sauce. Play: A concert series will present artists ranging from country superstar Billy Currington to rap legend (and Martha Stewart BFF) Snoop Dogg. Arizona farmers and 4H kids will compete in livestock competitions that include cows, goats, and poultry, and there’s a petting zoo for the animal lover in your brood. Stay: Go to visitphoenix.com for a range of affordable lodgings and attractions.

Eat: Are you ready for a Peanut Butter Pineapple Pork Burger? It’s an Indiana-raised pork patty topped with, yes, peanut butter and a pineapple ring, and if you’re still hungry after that, you might consider a corn dog topped with mac-and-cheese or tater tots topped with ground bison, jalapeno nacho cheese, and green onions. Play: Musical acts include Montgomery Gentry, Patti LaBelle, and actor-musician Keifer Sutherland. Take an overhead tour of the fairgrounds on the Subaru Skyride, and if you’ve never toured a pig farm via virtual-reality glasses, this is the place to do it. Stay: Go to visityindy.com for a range of affordable lodgings and attractions.

Iowa State Fair
This shindig is so legendary, Rodgers & Hammerstein devoted an entire musical to it

Eat: The Cheesy Fried Enchilada Funnel Cake combines everything you love about Mexican food with everything you love about fried dough, heaping chorizo and white queso on top of a deep-fried corn-meal funnel cake flavored with enchilada spices. And because that funnel cake is technically an entree, you can chase it with an Apple Taco (Granny Smith apple slices, whipped cream, and caramel in a deep-fried soft-shell taco topped with powdered sugar and cinnamon) for dessert. Play: The fair’s grandstand hosts musical artists including a cappella virtuosos Pentatonix, Flo Rida, and Nickelback. Adrenaline junkies should head to Thrill Ville, where an array of pleasingly terrifying rides will spin, toss, and drop fairgoers till they holler uncle. For more conventional fair fare, head to livestock, cooking, and other competitions. Stay: Go to traveliowa.com for a range of affordable lodgings and attractions.

Minnesota State Fair
Up north, everything, from the rides to the foods, is bigger.

Eat: Early risers may want to start their day with a Breakfast Buddy Bowl, a waffle bowl stuffed with hash browns, maple syrup, scrambled eggs, cheddar cheese, and bacon, all topped with a biscuit, sausage gravy, and green onions. For lunch, grab a Bacon Fluffernutter, which is even better than it sounds because the bacon, peanut butter, and marshmallow are sandwiched between grilled cinnamon buns . Play: Musical acts include Usher, Toby Keith, and Stevie Nicks. New fair attractions for 2017 include the ginormous Great Big Wheel, the Great Minnesota Knit Together, and the very clearly named Dress as a Sheep Contest. Stay: Go to exploreminnesota.com for a range of affordable lodgings and attractions.

Eat: Hot fried chicken, bacon-wrapped asparagus, Italian antipasto, and jumbo BBQ turkey legs are some of the fair faves. Play: Ride the incredible Sky Eye Wheel, the largest traveling Ferris wheel in America, visit the Made in Oklahoma store, get nose-to-nose with undersea predators at the Live Shark Encounter, and drop by the Vintage America Glamping Cooking Show. Musical acts include Gary Allan, Josh Turner, and more. An arm-wrestling competition, lasso and pistol skills showcases, and other frontier-themed attractions set this fair apart. Stay: Go to travelok.com for a range of affordable lodgings and attractions.

Oregon State Fair
Food, wine, beer, and even literature in the Pacific Northwest.

Salem, OR; August 24 to September 4; $8, oregonstatefair.org

Eat: Pop some deep-fried mashed potato balls flavored with bacon and cheese, choose from an array of deep-fried desserts like Oreos, Twix, and Pop-Tarts, and buddy up to devour a Monster Cheeseburger (you’ll need at least one friend to polish it off). Play: Musical acts include country star Trace Adkins, the always amazing Joan Jett and the Blackhearts and alt-country pioneer Dwight Yoakam. Unique attractions at this Pacific Northwest classic include the Pairings event focused on local foods, wines, beers, and distilleries, and an Authors Day devoted to the state’s literary stars. Stay: Go to traveloregon.com for a range of affordable lodgings and attractions.

State Fair of Texas
Three weeks. Texas-size everything. Any questions?

Eat: The State Fair of Texas takes its food so seriously, it holds a tasting and awards ceremony for the best new concoctions. This year’s semi-finalists will include Beer-Battered Beef Jerky, Deep-Fried Breakfast Cupcake, Crawfish Lollipop (no, we don’t know how that’s gonna work either), and… wait for it… wait for it… Fried Cheesecake-Stuffed Apple Sundae. Play: Musical acts include Los Traileros Del Norte, Charlie Daniels Band, Maren Morris, and the Spazmatics. Attractions include cookoffs, some of the biggest livestock competitions in America, and a beer garden and wine garden. Stay: Go to traveltexas.com for a range of affordable lodgings and attractions.

Kentucky State Fair
Eating and sipping the best of Kentucky are just two of the many thrills in Louisville in August.

Eat: Head to the Kentucky Cookout Tent for the best of the state’s meat and produce, including Kentucky ham and fresh corn, of course. The Whiskey Jam Tent serves up, y’know, plus the best of the music industry’s rising stars visiting from Nashville. Play: Thrill Ville is the place for visitors for whom “state fair” means the rush of being tossed into the air, dropped from a great height, and other fun rides. Enjoy competitions ranging from livestock and produce to cheer and dance, music, and cookoffs. Stay: Go to kentuckytourism.com for a range of affordable lodgings and attractions.

Washington State Fair
One of the west’s biggest rodeos, plus great music and homegrown food.

Eat: You’ll find an array of classic BBQ favorites and Juicy’s Outlaw Burger, Deep-Fried Bubble Gum from the Totally Fried stand (can’t make this kind of thing up), and the memorably named Cow Chip Cookies (way better than the name might suggest). Play: The Washington State fair hosts one of the biggest rodeos in the west, and musical acts like the Beach Boys, Nickelback, and Lady Antebellum will entertain guests well into the night, while the Dancin’ in the Dirt Party will rock rodeo-goers. Stay: Go to experiencewa.com for a range of affordable lodgings and attractions.

It's that time of year again. Livestock competitions, incredible thrill rides, and a wide array of deep-friend everything. Here, the where/when/how on some of our favorite great American state fairs.