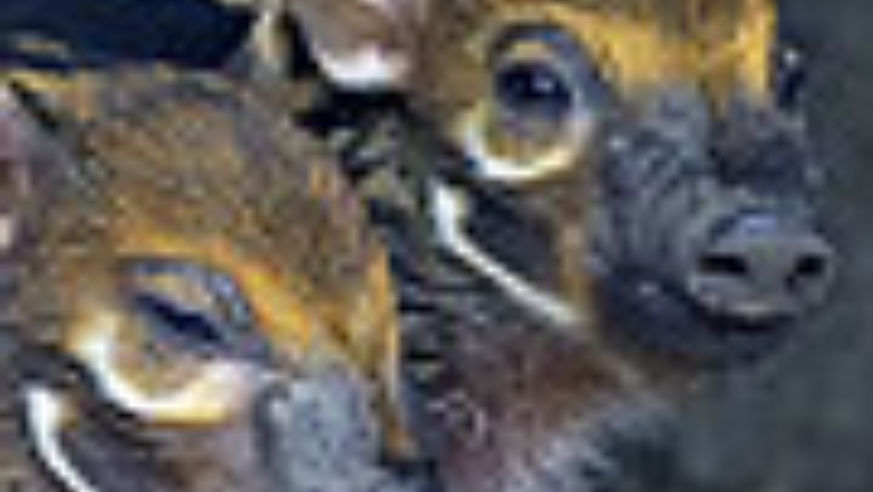 The Zoological Society runs the world-famous zoo in Balboa Park, where nearly all exhibits are open-air, as well as the 1,800-acre Wild Animal Park and a center devoted to research and conservation.

RED RIVER HOGS: Born March 27, 2007
These yet-to-be-named newborn triplets are nursing and keeping their first-time mother very busy. Red river hogs are native to the forests of western and central Africa and, like most swine, they have a keen sense of smell and use their snouts to dig for roots and tubers. These piglets have another use for snouts; they butt them together when wrestling each other.
Who Knew? Also called bush pigs, the animals are primarily active at night and tend to hide in bushes by day--their stripes help them blend in with the surroundings.

ELEPHANT: Born March 11, 2007
African elephant Litsemba, which means "the timid one" in SiSwati, gave birth to a male calf in the zoo's Wild Animal Park. Litsemba is one of seven African elephants rescued in August 2003. She was living in a national park in Swaziland, where limited space and droughts threatened the elephants' survival. The zoo hosts elephant shows daily at 1 P.M. and 3 P.M., and has an elephant webcam.
Who Knew? African elephants are much bigger than their Asian cousins, and Litsemba's baby can be expected to reach an adult weight of 7 to 8 tons.

SUN BEAR: Born September 23, 2006
Bulan is one of just two Bornean sun bears born in the U.S. (both at the San Diego Zoo). The littlest of the eight bear species, sun bears have distinctive yellowish marks--suggesting a glowing sun--on their chests.
Who Knew? In Malay, the tree-dwelling bears are called basindo nan tenggil ("he who likes to sit high"). The zoo has more fun facts and a video clip on its website.

OKAPI: Born September 21, 2006
Rarely seen in zoos, okapis have striped zebra-like legs yet velvety brown upper bodies. They're native only to the Democratic Republic of the Congo, where they're threatened by deforestation, fighting, and hunting. More than 30 okapis, including this newcomer named Akin Ali, have been delivered at San Diego's Wild Animal Park, which boasts the highest birth rate outside of Africa.
Who Knew? Okapis have long tongues like giraffes, their relatives, and use them to clean their eyes and ears.

ELEPHANTS: Two African elephants, Umoya and Lungile, are pregnant. The typical gestation term is about 21 months, and the zoo expects them give birth later this year (one in May or June and the other at the end of 2007).