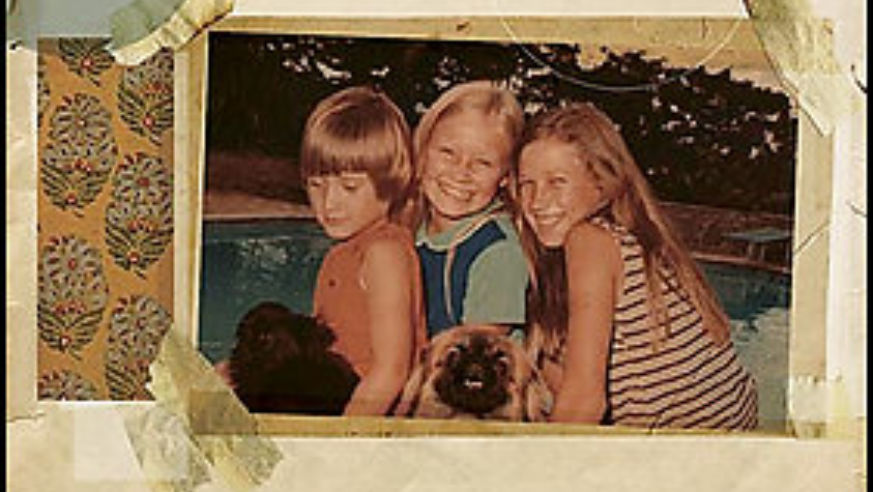 Here's an excerpt from Wendy Kann's memoir about growing up with her younger sisters in the twilight of colonial Rhodesia (now Zimbabwe).

When I was very young, my mother would invite people over to our small house in Mount Pleasant for a casual braai, a barbecue, and then open the front door wearing a midnight-blue velvet dress with her dark hair scooped up into a rhinestone tiara. The dress had hung in the bathroom beforehand amid billowing clouds of steam from the shower turned on full: a nipped and sensuous skirt supported by a boned and strapless bodice, assertive ghostly breasts looming over me as I peed.

She really wanted to be a ballerina. She had an old vinyl record of Swan Lake, with a picture of pink ballet slippers on its worn soft cover, that she played regularly. "Come," she panted, pulling at me when the opening bars of the "Dance of the Cygnets" rattled our glass doors. I'd glance down quickly to avoid her funny thumb (they'd had to chop a bit off it when she got a rose thorn stuck under her nail) and join her in those funny cygnet steps, and fall about laughing or beg her to "twist again," and we would pretend to dry ourselves with towels. But after a short while she would always put Swan Lake back on, loud and tinny, and eventually I'd wander off, bored.

She wasn't like the other mothers I knew. She poked a python out of our hedge with a broom. She yelled "Jump!" when the swing was at its highest, bit into onions like apples, and tried to convince me that it was always better to have flowers than food. Before Christmas we peeked, whispering, mischievous, conspiratorial, at my new dollhouse through the keyhole of the garage. Once we ate sweets together until I threw up. She didn't care whether Sharon wore clothes and was happy to cut up her own satin wedding dress to make gowns for my dolls--she sewing and chatting, me chewing the wax flowers of her bridal headpiece flat and spitting them out in a neat gray pile on her bed.

One day in the car, I whimsically mentioned I wanted to ride the grimy African bus ahead of us, and she promptly waved it down, bossily ignoring the snarled traffic and the astonished face of the black driver, pushing me, a five-year-old white child, through the soft black flesh and colorful bundles of alarmed passengers, hollering at my back to look out for her through the rear window. The bus stank of sweat and diesel. Yet hotter air pumped through its dirty windows as the bus pulled into traffic and I made a circle in the grimy glass and saw my mother there, waving to me encouragingly from our pale blue Cortina.

She followed me in her car through the clean white suburbs of Avondale and Milton Park, where the houses had lawns and swimming pools and tennis courts and the bus jolted and roared, stopping and starting, flesh and bundles shifting and resettling, stirring sweat, as people heaved on and off at neat and efficient shopping centers. Downtown, we turned onto First Street, where there were banks and teashops, offices and department stores, and white people strolled the recently swept pavements. First Street ended in the Cow's Guts, the dirtier Indian part of town. Here, storekeepers set up stalls outside their small shops or strung bright merchandise from awnings and noisily hawked their wares to African women, who hunted through their own expansive cleavages for carefully hidden cash. Beyond the Cow's Guts, the bus depot was on the lip of the Industrial Sites--a frantic fume-thick place, where a baffling number of blacks milled and yelled, deciphering schedules or selling single cigarettes and oranges. The bus I was on disgorged me there, and I flowed out onto the filthy sidewalk, where I was assaulted by dust and the odor of burning rubber and rotting fruit. Then my mother appeared, smilingly pushing her way through jostling crowds, laughing at my bewilderment, scooping me up against the starched cotton of her dress and the wires in her undergarments, the soft skin of her strong arms folded across my back, her body smelling salty and sweet, like home.

My father was proud of Rhodesia's unilateral Declaration of Independence from Great Britain in 1965. He drank to UDI at our braais and tennis parties where, after a few beers, he would often say, "Wendy, tell us about UDI," and on cue I would sing out, "Rhodesia has sanctions, and I can't have Marmite on my toast!" Then he would chortle with delight, grabbing and touslig my hair while the other grown-ups laughed.

I had no idea what sanctions or UDI really meant. In 1966, a year after the declaration, I was equally oblivious to the incident in which Rhodesian Security Forces killed seven black guerillas, marking the beginning of the Rhodesian War. That same year my mother brought Lauren home in her yellow carry-cot from the Lady Chancellor maternity hospital in Salisbury, where it was rumored they used placentas to fertilze the extravagant roses on their grounds. About then the threads that held our lives together slowly began to fray.

Reprinted from Casting With a Fragile Thread: A Story of Sisters and Africa. Copyright (c) 2006 by Wendy Kann. All rights reserved.