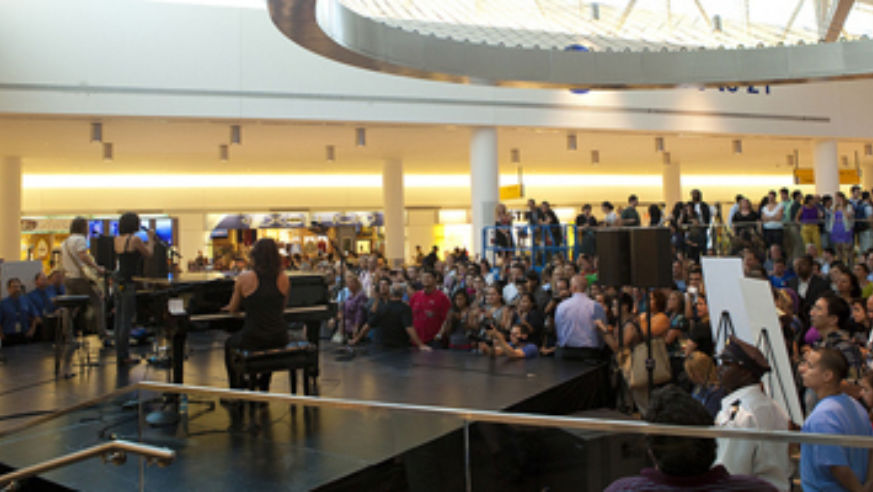 For most travelers, there are only two goals when it comes to the airport: get in, and—in as little time as possible—get out. But after a look at Cheapflight.com's list of the top 10 layover airports around the world, you might be tempted to linger for a few extra pre–flight hours. Boasting world–class museums, shops, and even movie theaters and golf courses, these airports are arguably destinations in their own right. Below, some of the coolest offerings at the airports that made the cut.

Munich Airport is a kid's paradise, with a mini–golf course, a Christmas market complete with ice rink, and specialty "Kinderterminals" that allow youngsters an inside look at flying. And for the adults? The al fresco Airbrau biergarten gives a traditional (and literal) taste of Germany, with a side of live entertainment.

Amsterdam's sleek, modern Schiphol Airport offers travelers a free extension of the Rijksmuseum, displaying works by Dutch master painters, as well as a casino for guests aged 18 and over.

You'll also find a museum at San Francisco International Airport—in fact, the 22–year–old SFO Museum, dedicated to aviation and history of the airport itself, is the first fully accredited museum located in an airport. SFO also debuted a yoga room earlier this year, and features an aquarium operated by the California Academy of Sciences.

Vancouver International Airport's five–year–old aquarium is home to over 5,000 sea animals, and is paired with a dedicated jellyfish exhibit. But the marine critters aren't the only otherworldly creatures you'll find at YVR. The Airport hosts "Take Off Fridays" during the summer, with an "underground circus" on display in domestic and international terminals. You'll be able to catch acrobats, face painters, live DJs, and local musicians, plus sample free food and score discounts on restaurants and shops.

New York City's John F. Kennedy International Airport also draws crowds with live performances in JetBlue's airy Terminal 5 (or T5, as it's nicknamed). And amateur hour, this is not: past headliners have included Taylor Swift, Chris Isaak, Robyn, and Raphael Saadiq. The casts of Broadway musicals such as Catch Me If You Can have even dropped by to give a sneak peek of their shows.

When it comes to entertainment, however, it's tough to beat Hong Kong International Airport, which just broke ground on the world's first airport IMAX movie theater on July 5. The 350–seat theater shows current movies in English with Chinese subtitles, from HKD 100 (about $13 USD by current exchange rates) per ticket. Pretty impressive—and we haven't even mentioned the iSports simulator (like a giant Wii) and nine–hole golf course also available to passengers at Hong Kong International.

Seoul's Incheon Airport reigns supreme as the Best Airport Worldwide according to Airport Council International, so what do they have to offer? How about the world's only Louis Vuitton airport boutique, an 18–hole golf course, an ice rink open every day, and a casino open 24/7? Due to South Korean laws, only those with a foreign (non–South Korean) passport are able to gamble at the casino, but the golf course and ice rink are open to everyone, with fees of KRW 30,000—about $26—and KRW 5,000—about $4.50—respectively. (Or you can opt for a visit to the driving range instead of a full golf game, from KRW 2,000—about $1.75—for a 30–minute session.)

Singapore's Changi Airport took second place in the ACI rankings, but it's pretty spectacular in its own right. It might not offer IMAX movies like Hong Kong, but it does have a 3–D and 4–D theatre with $6 admission, and it shows its 2–D films in two cinemas open 24–hours—with free admission. Plus, Changi features six gardens (with a koi pond and a butterfly garden among them) and a near 20–foot waterfall. Not too shabby.

Dubai International Airport offers a gateway suited to the City of Gold, with a whopping 50,000 square feet of duty–free and luxury shopping. You can also take a dip in the pool or work out on state–of–the–art fitness equipment located in the swanky G–Force Health Club.

The shopping scene at London's Heathrow Airport doesn't disappoint either, with an 11.000–square–foot Harrod's extension, as well as outposts of Brit fashion staples Burberry, Thomas Pink, and L.K. Bennett. And if all that retail therapy has worn you out, not to worry—you can rent a 75–square–foot personal 'cabin' from trendy hotelier Yotel, outfitted with futuristic purple lighting, a "power shower," refreshments to order, and free wi–fi (from about $50 for the minimum four–hour stay).

What do you think of Cheapflight.com's picks? Have you ever traveled through these, or other, posh airports?

The Five Busiest Airports in the U.S.