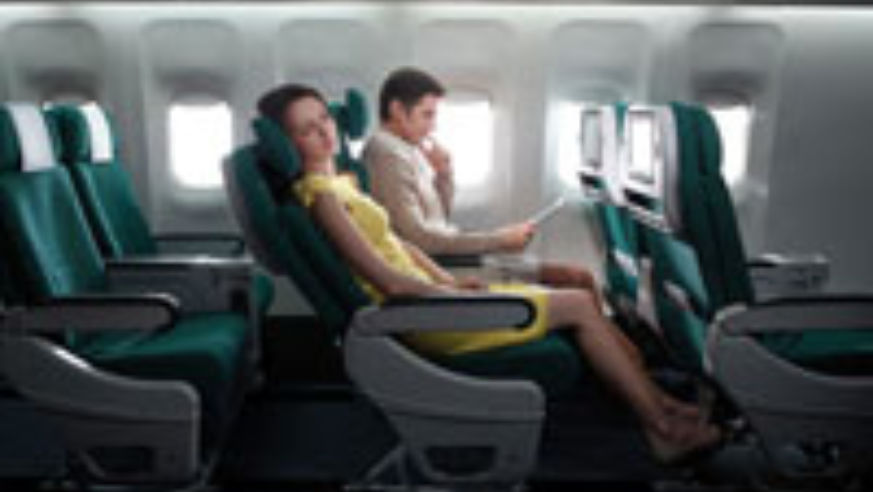 More and more travelers face a tough decision: Would you pay a few hundred dollars more for somewhat comfier seats?

Not all premium class seats are created equal.

Call it "business minus."

That said, many foreign airlines really do mean "premium" when they say premium. Think: lie-back seats and plenty of perks (like early boarding privileges and complimentary alcoholic drinks).

Here's a round-up of the latest news in premium economy seats:

From May, the Hong Kong-based carrier joins the small number of airlines offering premium economy. Having launched this year, premium economy class is becoming easy to find on Cathay Pacific's flights between the US and London and the US and Asia and Australia. The seats are wider (18-and-a-half-inches), recline further, and have more legroom, with a 38-inch seat pitch. Premium passengers can use faster check-in desks, can board before coach class, and can take advantage of a bigger baggage allowance, and get access to a nicer in-flight amenity kit. Nearly all of the airline's new aircraft feature premium economy for international flights.

Since las summer, Delta has been rolling out its new Economy Comfort class on overseas routes, which means greater seat recline, 36 inches of seat pitch to free up your feet, an AC power outlet, early boarding rights, and free alcoholic beverages at a splurge cost of about $160 to $320 one way for international round-trips.

On nonstop 757 flights domestically, United has been steadily adding premium economy seats, which add five to six inches of legroom on non stops and early boarding privileges. Economy Plus can range in price, but a $200 extra cost over coach is typical for an overseas trip. As of this year, all of United's 757-200 jets have premium economy, and many other of its airplanes also do, meaning 1,845 Economy Plus seats have been added since last November.

Would you upgrade to premium economy for more legroom? Or would you stick with coach class?

One Airline Boards Its Customers Faster Than Most