Top 10 Travel Scams to Look Out For! 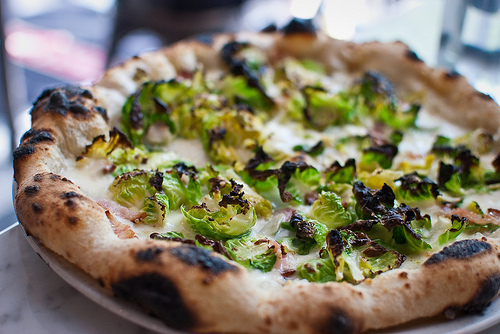 Courtesy <a href="http://mybt.budgettravel.com/_Brussel-Sprout-and-Pancetta-Pizza/photo/10298925/21864.html">addunnuck/myBudgetTravel</a>
Welcome to the brave new world of vacation ripoffs! The old "catch my baby while I pick your pocket" trick seems downright tame compared with this scary new breed of travel cons.

Remember the days when a fanny pack and a "game face" could protect you from getting your money stolen? We don't either! Vacationers have always been targets for smart, enterprising crooks, and the farther you get from home, the easier it is to fall for popular vacation scams like the dropped baby, the fake fight, and the I-need-five-euros-to-replace-my-lost-train-ticket. But these days, you are at risk for more than just some lost bills. Watch out for these scams from around the world that can put your personal safety—and even your very identity—at risk.

Here's a scam so bad even Mickey Mouse took a stand. Guests in hotels around Disney World have been finding pizza delivery menus conveniently slipped under their doors, but place an order—and make the mistake of giving your credit card number—and you'll really pay. The phone number isn't connected to a pizza parlor but to identity thieves. Disney World supported a law designed to crack down on the people handing out the fliers, but Orlando police say the problem persists.

Solution: If you're craving a slice, get a recommendation from the hotel.

In Vietnam, open-ended bus tickets are the best way to travel at your own pace between Ho Chi Minh City and Hanoi, and the Sinh Tourist line is widely considered the best. So widely considered, in fact, its many impostors call themselves Sinh Tourist, too. Because of Vietnam's lax intellectual property laws, it's difficult to know which Sinh is the real deal. Take the wrong carrier, and you'll get iffy service or, worse, an unexpected overnight stop at an overpriced hotel in cahoots with the bus line. "In summary," said Stuart McDonald of travelfish.org, a travel advice site that covers Southeast Asia, "it is a snake pit!"

New Yorkers are famously pushy, but Times Square's so-called CD Bullies take the stereotype to a whole new low. A guy on the corner barks, "Check out my music!" and hands you what seems to be a free copy of his CD. He's so nice, he'll even offer to autograph it. But once the disc is in your hands, the aspiring rapper—suddenly surrounded by friends—refuses to take it back. You need to pay $10 or so to stop them from menacing you.

Solution: If the rapper won't take the CD, gently place it on the ground and walk away.

You go to Vegas to gamble, but you don't want to risk your luggage, too. Sin City's cab drivers are notoriously sketchy; one common scam involves a cabbie who insists on unloading your bags at your hotel or the airport. He says he's in a rush, slams the trunk, and speeds away. Only later do you notice that one of your bags is missing. "When you're coming to Vegas, you gotta be on your A-game with your stuff," says Sergeant Jerry MacDonald of the Las Vegas PD. "Trust me when I tell you, they'll snatch your luggage up faster than you can blink an eye."

Solution: Note the driver's name, cab number, and company when you get in; that way, if anything should happen, you have recourse.

Some criminals who want your money are brazen enough to come right out and ask. An increasingly common scam involves hotel guests who receive a phone call in the middle of the night from someone claiming to work at the front desk. There's been a problem with your credit card, they say. Could you read the number back one more time? The scammers are banking you'll do something while half-asleep that you never should—give out credit card info by phone.

Solution: Hang up and call the front desk directly to make sure the request is legit.

The pyramids around Cairo are one of the world's best photo ops, and some tourists up the ante by posing on the back of a camel. Often, there are trainers standing by to coax the eight-foot-tall, 1,500-pound animals to lie down passively in preparation for riding. Once you've paid your $15 and mounted the beast, though, some touts will insist that you pay again to disembark and hold you hostage on the hump until you do.

Solution: "Never just get on a random guy's camel," says Kara Lucchesi of STA Travel. It's safer to stick to rides arranged via an established tour company.

Bali has an altogether unexpected kind of crook—the monkeys who are so beloved that they have their own sacred forest and temple, where they're allowed to roam free. These monkeys can have sticky fingers, going after food if it piques their interest—and, worse, valuables. Some enterprising locals are usually on-hand to coax the monkey to give back its plunder, though they'll ask for a small tip of up to $3.50.

Solution: Seek out a staff member for assistance if a monkey snatches something from you. Better yet: hold on tightly to purses and backpacks and remove and secure glasses or anything else that can be easily purloined.

While some pickpockets make their living on not being noticed, others do it by getting aggressive and in your face—then ripping you off while you're distracted. Rome is home to the infamous "fake baby" ruse, which sees a woman trip and throw a bundled doll into your arms, or just drop it on the ground, in an attempt to draw your attention away from pickpockets, often children, nicking your wallet or making away with your camera bag.

Solution: Beware of women who "throw" their babies or any other unusual distractions.

The cramped and congested passageways of Cochabamba's famed La Cancha—the largest market in Bolivia—make it the perfect staging ground for "the squeeze." Overwhelmed by the chaos and distracted by the overflowing stalls, you might find yourself suddenly pressed among a group of burly men, unable to move your arms. By the time the surprise wears off, the thugs have already rummaged through your pockets and disappeared.

Solution: Pay extra attention at cross-streets, which lend themselves to fast approaches and easy escapes.

It costs nothing to spend the day at Barú Island's Playa Blanca, which with its white sands and crystal Caribbean surf might be Colombia's most beautiful beach. Lying on your towel, you might feel a pair of warm hands on your shoulders, and hear the soothing voice of a woman saying to accept this massage as a gift. Tempting, but if you aren't prepared to part with at least $10 in pesos, the price will be an especially histrionic fight.

Solution: Remember, there is no such thing as a free massage.

You and your credit card have been through a lot together. You used it to buy your new laptop and your vacation to France, to pay the electricity bill and support your weekly Whole Foods habit. There have been good times, of course, like when your card provided insurance for your rental car. But ask yourself, what has it really done for you lately? Hiked its Annual Percentage Rate, added mysterious fees, punished you for 'foreign transactions' on your trip to Mexico? It's time to put your spending power into a credit card program that values—and rewards—your wanderlust. Citi Gold/AAdvantage Visa Signature Card Best for: domestic travelers who often fly to the same destinationSo you visit your grandmother twice a year in Cincinnati and fly home to Santa Barbara on all major holidays? This Visa card features a 'Reduced Mileage Awards' program that allows cardholders to fly to select AA destinations for 7,500 fewer miles on a round-trip ticket. If you spend just $750 on the card in the first four months, American Airlines will award you 25,000 bonus miles, enough for a domestic round-trip flight. You'll earn one AAdvantage mile for every dollar spent, and there are no blackout dates for travel on American Airlines or their American Eagle and American Connection domestic carriers. Annual fee after first year - $50. Chase Sapphire Preferred Best for: globetrottersLet's say it together now: no foreign transaction fees. That means you won't be charged extra for using your card anywhere overseas, a crucial benefit for international travelers. The Chase Sapphire Preferred also lets you turn your points into miles with a 1:1 exchange into United Airlines, Southwest Airlines, Korean Air, and British Airways, or other travel programs like Amtrak Guest Rewards, Hyatt Gold Passport, Marriott Rewards, Priority Club Rewards, and Ritz-Carlton Rewards. The introductory offer is tempting: spend $3,000 in the first three months and you'll earn 40,000 miles, roughly $500 towards travel rewards. Annual fee after first year - $95 Starwood Preferred Guest/American Express Best for: hotel connoisseurs and travelers to Latin AmericaAlways wanted to stay at the W Barcelona or the St. Regis New York? Starpoints earned on this card can be redeemed at over 1,000 hotels in nearly 100 countries. The first time you use your card, you'll earn 10,000 Starpoints, enough for a free night at a 4-star property. You can also transfer your Starpoints on a 1:1 basis into more than 30 frequent flier programs. Travelers to Central and South America win especially big with this card—Starpoints are instantly doubled if you transfer them into LAN's frequent flier program. Annual fee after first year - $65 American Express Premier Rewards Gold Card Best for: big spendersDo you put more than $2,000 a month on your credit card? This program will triple your points when you buy a plane ticket and double your points when you spend on gas and groceries. Because the annual fee is on the steep side, this card is a much better deal if you rack up a lot of charges on your card each month. Your earned points never expire; use them on any airline, anytime, by reserving a flight through American Express Travel, or transfer them into your preferred frequent flyer program—points can also be redeemed for retail and dining gift cards. Annual fee after first year - $175 United MileagePlus Explorer Card Best for: United frequent flyersIn addition to giving you two miles per dollar spent on United Airlines tickets, the United MileagePlus Explorer Card offers cardholders a free checked bag on any flight in the system (United charges $25 for the first checked bag, saving you up to $100 on baggage fees for a round-trip flight since this benefit is also extended to one companion on the same reservation), and a 30,000-mile bonus when you spend $1,000 in the first three months. Miles will never expire as long as your account remains active, and cardholders can book award travel on any United Airlines flight at any time. You'll also get two free United Club passes per year (a $100 value) and enjoy priority boarding on all flights operated by United. Annual fee after first year - $95