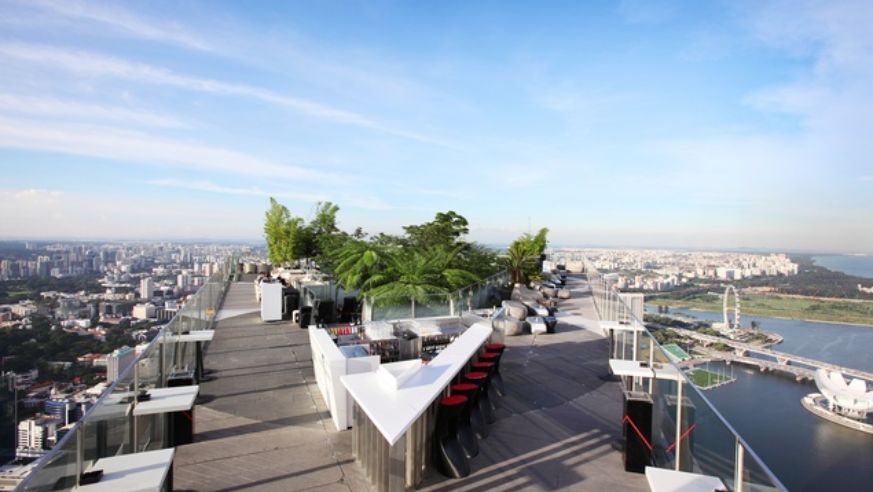 The 63rd-floor terrace at 1-Altitude in Singapore provides unbeatable views of Marina Bay and the South China Sea beyond.

Sightseeing doesn’t have to come to a halt just because you’re hungry. Pull up a seat, sit back, and feast your eyes on the wonders of the world in <i>BT</i>'s favorite dining rooms with a view.

Savings-minded travelers may not always be able to spring for the loftiest hillside hotels, but a single meal at a spectacularly situated restaurant can be a worthy splurge. From glacial peaks to ancient rain forests—even an underwater dining room in the Indian Ocean—we've rounded up 11 unforgettable places to pick up a fork.

See the views for yourself.

The untamed Andes from the southern-most city in the world.
You might not expect to find world-class French food in a frontier city that's more or less at the ends of the earth—which makes Chez Manu an even more pleasant surprise. Set on a hill about a mile north of Ushuaia, the capital of Tierra del Fuego and the southern-most city in the world, the restaurant first impresses visitors with its remarkable perspective on Beagle Channel and the daily parade of icebreakers and ocean liners departing for the Great Southern Sea and Antarctica. And then there's the food. Naturally, fish figures prominently—particularly cold-water species from the bay, such as black hake, salmon, and herring, to which expat chef Emmanuel Herbin applies his own suitably French twists (seasoning with anise and herbs, say). Also worth a try: Herbin's takes on Patagonian lamb and Fuegian rabbit, served in an aged mustard sauce.
Best Deal Centolla (king crab) is abundant here, and preparations such as centolla gratinada "Chez Manu" come in well below splurge territory ($24). 2135 Fernando Luís Martial Ave., Ushuaia, Argentina, 011-54/2901-432-253, chezmanu.com, entrées from $15.

Primordial paradise in the midst of the jungle.
Consider it a total-immersion meal. Part of the Daintree EcoLodge & Spa in northern Queensland, Julaymba Restaurant brings travelers right to the heart of the world's oldest rain forest. The 40-seat restaurant's terrace juts out over an ancient freshwater lagoon while tangled vines drape from the canopy above. From every direction, diners hear the sounds of some 430 species of birds, plus tree frogs, wild turkeys, and wallabies thumping through the brush. But it isn't just the soundtrack that's authentic here—the distinctly Aussie menu incorporates pepper berries, wattle seeds, and other native foods used by the local aboriginal Kuku Yalanji people, many of whom work in the restaurant. Make like a local, and order either the smoked crocodile or the kangaroo steak.
Best Deal The lunch-only fish-and-chips special—it's made with local, line-caught barramundi and chips ($17). Daintree EcoLodge & Spa, 20 Daintree Rd., Daintree, Australia, 011-61/7-4098-6100, daintree-ecolodge.com.au, entrées from $29.

Over-the-top architecture in the world's most outrageous city.
For all the glamour, glitz, and grandeur that have come to define Dubai (or at least its skyscrapers), Pierchic stands out for being just the opposite: understated, low-slung, and thoroughly vernacular in its architectural style. Its wooden beams blend right in with the simple, 500-foot jetty that connects the over-water dining room to Jumeirah Beach and provides enough distance to take in the man-made Palm Jumeirah Island and the full height of Burj Al Arab's 1,000-foot-tall glass sail. Despite the restaurant's waterfront location, much of its top-notch seafood is imported from around the world: butter-poached Canadian lobster, Tsarskaya oysters, and organic Irish salmon confit.
Best Deal The seafood lover's degustation menu, which includes an appetizer, an intermediate and a main course, and a dessert ($43). The menu changes daily, but expect options such as brown shrimp panna cotta, pan-fried oyster, and crème brûlée. Served daily from 1–3 p.m. Al Qasr Hotel, Madinat Jumeirah, Dubai, 011-971/4-366-6730, jumeirah.com, entrées from $27.

Scuba views from beneath the ocean.
It's like dinner theater for the dive set—and there's not a bad seat in the house. Ithaa is located 16 feet below the surface of the Indian Ocean. Its tunnel shape and glass walls reveal a breathtaking seascape of unspoiled coral atolls, schools of parrot fish, and giant stingrays to 12 lucky diners. The menu is rich with decadent dishes like caviar, line-caught reef fish and rock lobster, but if you'd rather not look out the window for your ordering inspiration, seared veal tenderloin and button-mushroom soup make for suitable substitutions. And while the four-course lunch menu is undoubtedly a splurge, it's still cheaper than getting certified to scuba. Note that tables can only be reserved two weeks in advance.
Best Deal An 11 a.m. daily cocktail hour opens up the space to curious travelers who can't quite justify the cost of a meal (though the cocktail event itself is a splurge at $55 per person). Conrad Maldives hotel, Rangali Island, Maldives, 011-960/668-0629, conradhotels1.hilton.com, six-course dinner from $320 per person.

A view of the country's most famous gilded square.
Of the nine restaurants, bars, and cafes within the upscale, three-story GUM department store in Red Square, Bosco Bar hits a rare sweet spot: There is a bona fide social scene, plus impressive sightlines and prices you can actually stomach. While the shopping center itself draws wealthy Muscovites browsing Hermès, Cartier, and Armani, savvy travelers stake out seats in the 1970s-inspired bar on the square, where they can see Lenin's mausoleum, the Kremlin, and St. Basil's Cathedral all at once. The menu, like the space itself, straddles the new/old divide, with inventive salads (quail with beets and roasted foie gras; smoked salmon, arugula, and potato) and traditional favorites such as beef Stroganoff and borscht.
Best Deal Red Square, red soup: A bowl of borscht goes for $16. GUM Department Store, 3 Red Square, Moscow, Russia, 011-7/495-627-3703, bosco.ru/en, entrées from $11.

A lofty view of a sparkling metropolis.
The 63-story OUB Centre, on Singapore's version of Wall Street, is crowned by 1-Altitude, a three-level venue that offers the best views in the city—plus main-course-quality bar snacks such as wood-fired pizzas, satay platters (spicy Thai beef, chicken, and pork), and Turkish flat bread with dips. The cocktails run the gamut from classic (mojito) to creative (The Narcissist is a tempting combination of Russian Standard vodka muddled with peach, freshly squeezed lime, and rosemary-infused raspberries). The year-old hotspot is always buzzing with young Singaporean professionals, who are keen to kick back after a day's work and survey the skyline, Marina Bay, and the army of container ships plowing through the South China Sea beyond.
Best Deal Good selection of affordable New World wines, from $13 a glass (cocktails start at $16). OUB Centre, One Raffles Pl., 63rd level, Singapore, 011-65/6438-0410, 1-altitude.com, pizzas from $20.

Alpine splendor overlooking Lake Geneva, Mont Blanc, and the Matterhorn.
Talk about making the rounds. Patrons of Kuklos, a futuristic, glass-walled restaurant in the Bernese Alps, don't have to choose between scoping out Lake Geneva, Mont Blanc, or the Matterhorn during their meals. All they have to do is be patient. Every 90 minutes, the circular second-floor dining room makes a full 360-degree rotation, revealing new spans of snowcapped scenery all the while. The menu skews traditional—with Gruyère-and-vacherin fondue and rösti, a Swiss riff on a potato pancake—and the dress code is casual, for a clientele of mostly skiers and mountaineers. What's more, even getting to the restaurant is an experience: Diners access the mountaintop by way of a 10-minute cable-car ride from the town of Leysin, nearly 2,600 feet below.
Best Deal The "panorama gourmand" package covers round-trip gondola fare (normally $26 per person) and a three-course meal ($80) for two for $160—a savings of $52.1854 Leysin, Switzerland, 011-41/24-494-3141, teleleysin.ch/en, entrées from $25.

The most scenic coastline in America.
America's most scenic route presents mile after mile of picturesque vistas—for everyone but the driver, who's focused on navigating the Pacific Coast Highway's notoriously twisty path. The perfect reward for playing chauffeur? A seat on the oceanfront patio at Rocky Point Restaurant, roughly halfway between Big Sur and Carmel. From any of the 15 casual, wooden outdoor tables, guests can soak up views of coastal mountains and rock-strewn shoreline—and, if they're lucky, spot dolphins, sea lions, otters, and whales in the waters beyond. Hearty dishes such as prime rib, New York strip, and swordfish steak—all cooked over a mesquite-fired grill—provide suitable fuel for the next leg of the journey.
Best Deal The four-course early-bird special costs less than most dinner entrées and will keep you in your seat through sunset ($22). Served Sun.–Fri., 5–6 p.m. 36700 Hwy. 1, Carmel, Calif., 831/624-2933, rocky-point.com, entrées from $24.

America's most celebrated skyline.
It's a fact: Searching out the most expansive views of the Manhattan skyline requires leaving the island itself—which the devoted clientele of Alma, a three-level Brooklyn dining institution, have been doing since the restaurant opened in 2002. Seeing the Statue of Liberty, too? That's just a bonus. Regulars know to show up early—in the spring and summer there's a no-reservations policy for the 50-seat rooftop garden. Standouts on the nouvelle Mexican menu include a pork-stuffed chile relleno and tangy chilaquiles in tomato sauce, both of which are also available in the main, second-floor dining room—sans the view.
Best Deal Arguably, the sights are best seen in daylight—which works for your wallet, too. The average brunch dish (say, a pollo adasa torta with roasted tomatoes and greens) costs half as much as comparable dinner options ($8.50). 187 Columbia St., Brooklyn, N.Y., 718/643-5400, almarestaurant.com, entrées from $16.

Iconic buttes and majestic spires.
"Monument Valley is the place where God put the West," remarked John Wayne, who helped put the valley on moviegoers' maps by filming Stagecoach there in 1938. Seventy-plus years later, the landscape is just as cinematic, as the folks behind the 95-room View Hotel well know. The on-site restaurant takes full advantage of its location amid the valley's majestic spires: A large bay window overlooks East and West Mitten Buttes, so named for their resemblance to the woolly hand warmers, and natural light floods the space all day. Ambitious early birds can watch the sunrise from one of the few tables lined up along the window (the restaurant opens at 7 a.m.). But arriving later has its benefits, too—like tasting Chef MacNeal Crank's updated takes on his grandmother's traditional Navajo recipes, such as fry-bread tacos or red chile posole, rich with buttery hominy.
Best Deal The all-you-can-eat breakfast buffet ($6). Monument Valley Tribal Park, U.S. Hwy. 160 and 163, Monument Valley, Utah, 435/727-5555, monumentvalleyview.com, entrées from $12.

Tropical treasure from the heart of a chocolate plantation.
Calling all chocolate lovers: Boucan Restaurant might just be your dream come true. Every last item on the menu incorporates some form of cocoa, from a green salad tossed in white chocolate dressing to sautéed prawns with chocolate tapenade and, of course, desserts: a chocolate tart, cacao crème brûlée, and espresso-and-dark-chocolate mousse, to name a few. It's a fitting theme for the brainchild of two British chocolatiers who opened the restaurant (along with the 14-room Hotel Chocolat) in February 2011 on the site of St. Lucia's oldest cocoa plantation, established in 1745. Even dreamier than the indulgent dishes? The jungle-draped views of the Piton Mountains, lush, twin-peaked mountains that rise almost 2,600 feet above sea level on the volcanic island's southern coast.
Best Deal Every dinner reservation from now until December 1, 2011, comes with a complimentary cocktail from a menu that includes chocolate daiquiris, cacao Bellinis, and cacao-pulp martinis (a $10 value). Hotel Chocolat, Rabot Estate, Soufrière, St. Lucia, West Indies, 011-758/457-1624, thehotelchocolat.com, entrées from $15.