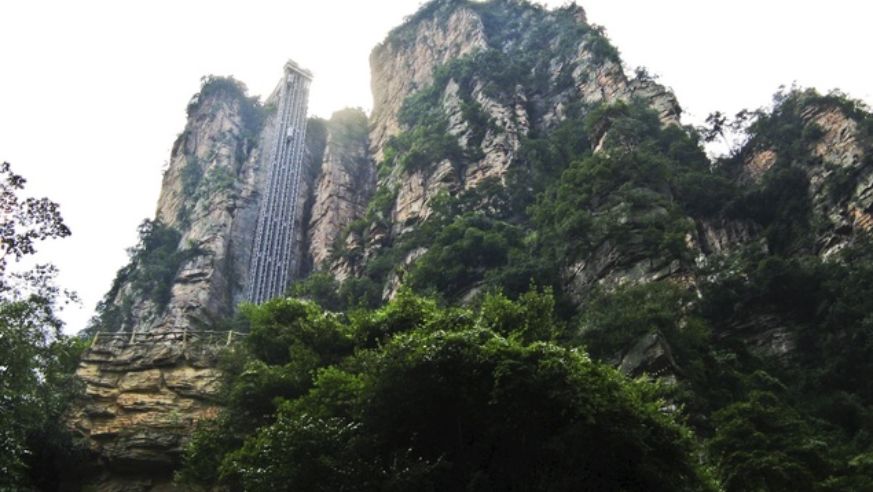 When it comes to elevators, function usually trumps form and the ride is utterly forgettable. Not so with these lifts—some look like they belong in sci-fi thrillers, others could be theme park attractions, but a trip on any one of them will earn you a lifetime of bragging rights.

Usually, a ride on an elevator involves pushing a button and zoning out until the ding for your floor. Pay attention on these lifts, though, or risk missing out on one of the most thrilling rides of your life (even if it only lasts 30 seconds). From zooming up an inside-out London landmark to climbing to a scenic overlook in rural China to an ascent up an American icon, these vertical feats of engineering are about way more than getting from point A to point B.

The ascent to the top of America's tallest monument begins in a futuristic, white pod elevator at the base. The mod design feels like something straight out of The Jetsons, but the crowning stroke of genius by Finnish architect Eero Saarinen was the addition of glass doors, which reveal the mechanical complexity of the structure's interior as the cars chug up to the observation deck of the 630-foot high wonder. The ride is over in just four minutes, at which point visitors can make their way out to marvel at how tiny the mighty Mississippi River and all of those cars below appear.

Bailong Elevator in Zhangjiajie National Forest Park proves that extraordinary lifts aren't just for cities. In a feat of engineering, glass elevator cars rise nearly 1,070 feet up a sheer cliff as they transport folks to a scenic area overlooking the green-swathed valley below. In two minutes time, guests are treated to some of the park's best scenery, including scenic lakes and the distinct sandstone pillars the region is known for.

How to ride: The scenery in Zhangjiajie is spectacular, rain or shine, but be aware that the lifts may shut down for inauspicious weather. Zhangjiajie National Forest Park, Hunan Province, 011-86/744-836-2222, $39 for a two-day park ticket, lift is $8.90 per person.

Imagine boarding an elevator...in a boat. It's not as crazy as it sounds. The Falkirk Wheel is exactly that—a lift for boats-and it serves a very practical purpose. It opened in 2002, the long-awaited answer to the question of how to link two canals whose inconvenient, lock-ridden connection had been severed nearly 70 years earlier. Not surprisingly, the lift has become a popular attraction, with 50-minute gondola tours that traverse both canals and include two rides, up and down, on the elevator. At the zenith of the Wheel's rotation, visitors can see as far as two miles outside of Falkirk proper and marvel at both the bucolic countryside and the 115-foot tall contraption swooping them gently through the air.

How to ride: Due to the popularity of the Wheel, pre-booking tickets online or over the phone is recommended. Check the weather beforehand—clear days will yield the best views of these pastoral scenes. Lime Rd., Tamfourhill, 011-44/8700-500208, www.thefalkirkwheel.co.uk, $12.25 for adults, $7.75 for children 3-15.

It resides in the lobby of Berlin's Radisson Blu Hotel, but the AquaDom goes where few hotel elevators have ever dared venture: the middle of the sea (or close enough, anyway). A lift rising through the hollow center of a cylindrical, 82-foot tall aquarium transports visitors through a full panorama of tropical sea life. Fish festooned with vibrant colors nibble at the aquarium wall inches from their human admirers. Almost a hundred different species, including blow fish, silver moonfish, and humphead wrasse, are represented in the tank, which holds over a million liters of water and is the largest cylindrical tank aquarium in the world. The ride is decidedly leisurely—perfect for reveling in the sensation of floating in an underwater wonderland.

It looks like a rocket ready to blast off into the unknown, but the Hammetschwand Lift offers far more colorful vistas than anything you could find in the emptiness of outer space. The elevator opened in 1905 as an addition to the Bürgenstock Resort and its birds-eye views of the rugged Alps and Lucerne's blue waters have been wowing visitors ever since. The years have done nothing to diminish its impact—the 499-foot, 48-second ride is still the tallest outdoor lift in Europe. And while the structure's spiderweb latticework might seem precarious, the engineers behind the project clearly knew what they were doing because the lift has stood the test of time. Today, modern cars traverse the distance at a brisk speed of 10 feet per second, making this hotel elevator a legitimate thrill ride. Ready for liftoff?

How to ride: The lift shuts down for the winter months, so plan your visit between mid-May and mid-October. It stays open late on Saturdays in summer, making it the perfect venue for enjoying a sunset. Bürgenstock Resort, Obbürgen, 011-41/612-9090, buergenstock.ch, tickets are $14 for adults, $7 for children 6-16.

There is no better way to take in the sights of Stockholm than a ride along the Ericsson Globe. Gondolas attached to a track run along to the exterior of this spherical structure (361 feet in diameter). The glass lifts trace a twenty-minute curve to the very top of the orb and back down, giving visitors a constantly evolving panorama of the city's skyline. The only downside is that it doesn't give you a view of the Globe itself; the clean, white structure dotted with porthole windows is one of Stockholm's most striking landmarks.

The Lloyd's of London building on Lime Street was designed inside out, thrilling passersby with massive piping curving around the exterior. The twelve glass elevators are outside as well, gliding smoothly up the side of the building. They might not be the fastest or the tallest, but for these lifts, it's all about the view. The Thames River is only a quarter mile away and some of London's other eminent sights—including the spire at St. Paul's from one side of the building, and the celebrated Gherkin from another—are even closer, making a 30-second trip up those crystal pods is one of the best ways to savor the city.

How to ride: This one will be the hardest to check off the list: Lloyd's lifts are only open to employees and official visitors and security is tight. But don't give up hope. The building is usually included in London's annual Open House, when the public gets free access and tours to places normally off-limits. One Lime St., 011-44/20-7327-1000, lloyds.com, free during London's Open House, September 20 and 21, 2014.

Tearing along at almost forty miles per hour, the tower's lifts reach the 89th-floor observatory in just 37 seconds, leaving riders well over a thousand feet above the city. From this viewpoint, every corner of the sprawling metropolis is tiny by sheer distance. Parks, temples, and even other skyscrapers and distant mountains are practically Lilliputian. And the journey is only half over—the stomach-dropping return trip is just as thrilling.

Don't call it an elevator. The Luxor's "inclinators" transport guests up the side of the hotel's iconic pyramid at a sharp 39-degree angle. Unlike others on this list, the cars lack observation windows, and they can't compete with other famed elevators in height (they only span 30 floors). But like so much of Las Vegas, the inclinators are all about standing apart from the crowd. There are also great views from the top floors of the faux Egyptian universe below, especially at night, when the decadent lights of the lobby flash to life.

For most of the lifts on this list, the thrill comes from the view outside the walls. But for this elevator, it's all about the view inside. Don't be fooled by the building's businesslike façade or its no-nonsense entryway. A psychedelic scene awaits behind the deceptively unadorned doors of the elevator near a small entrance on 31st Street. The one-of-a-kind interior is painted with the massive, twisted visage of a grinning dragon with grotesque 3-D beasts bursting from its eye sockets. The effects are striking (made even more disorienting by the small fish-eye mirror on the back wall). The journey up the building's six floors is quite a trip, indeed.

How to ride: Anyone who works in the building should be able to point the way. 30-30 47th Ave., Long Island City, free, if you can get to it.

With their stark, curving metallic exteriors and glowing visor-shaped windows, the elevators at the Mercedes-Benz Museum in Stuttgart are as much fun to watch rise and fall along tracks in the museum's atrium as they are to ride. The trip only takes about 30 seconds so feel free to ride multiple times. You might want to pop off every once in a while to see the exhibits covering 125 years of motoring landmarks—and to see the inspiration behind the elevators' uber-modern look.

The view from this tower's observation level (610 feet in the air) is impressive for sure, but watching it unfold in front of you on the 40-second ride up is even more magical. The glass-fronted elevators have views of the harbor and Auckland's modest cityscape, as well as the green countryside unfurling like a quilt in the far distance. If you can tear your eyes away from the view out the sides, look down through the glass floor for the extra thrill of seeing the ground speed away from you—and come rushing back towards you on the descent.