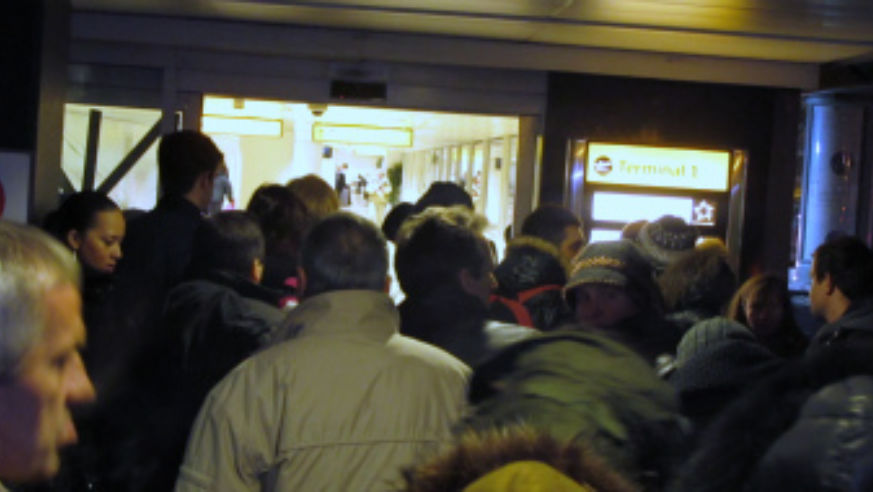 Courtesy Sean O'Neill
During the height of the crisis, passengers weren't allowed to enter Heathrow Airport if their flight had been canceled.

In the past week, thousands of flights were canceled at European airports because of uncommonly icy weather. In Germany, there is a word for what happened next: "Winterchaos."

I witnessed some of the melodrama when I attempted to fly from England to the United States earlier this week. On Sunday at 5:30 in the morning, I arrived at Heathrow's airport. Officials were preventing passengers from entering the airport unless they were booked on a flight still scheduled to depart. Travelers on canceled flights—including some families with young children who hadn't dressed for this situation—had to stand in the dark and cold outside of the airport's entrances for at least an hour.

Eventually, I flew to Dusseldorf and, from there, took a train to Frankfurt.

The scene that greeted me at Frankfurt Airport was surreal. Lines of passengers stretched up and down the airport. A TV news crew followed one Lufthansa official as she talked to passengers standing in a particularly long line. She said it would take about six hours for these passengers to get to the front of the line and rebook their flights. She and an assistant then handed out free buttered pretzels, sandwiches, and bottles of water.

Here are some lessons, which could be helpful in other airport crises:

If your flight is canceled while you're at the airport, you should call the airline while standing in line waiting to be rebooked.

Otherwise, you may have to wait for hours to reach the agents at the counter rebooking a whole plane. A telephone rep may instead be able to help you sooner.

Cell phones overseas can't call U.S. toll free numbers for the airlines. Tip number one is to print out Budget Travel's wallet card with airline phone numbers (opens as a PDF). This includes local numbers, not just toll-free numbers, and you can dial these local numbers from overseas.

If you've misplaced that card, what to do? A few years ago, to call an 800 number from abroad, you could replace the 800 with 880. But that's no longer allowed. Today, the best way to call domestic U.S. 800 numbers from abroad is to use AT&T USADirect Service. Go to that website, pick the country you're visiting, and you'll see the phone number you need to dial. You must pay for the call because the 800 number is toll-free only in the U.S. Bill your credit card.

Don't depend on the phone, though.

In a crisis, many airline phone centers can't handle the number of calls from upset passengers. Last Monday, for instance, wait times for Continental Airlines's toll-free number surpassed half an hour. But many airlines and airports were getting out the word about cancelations and closings via Twitter. Wait! Keep reading! You don't have to use Twitter. Without signing up for the free service, you can still see relevant updates that have been posted online through it. For example, you could go to www.twitter.com/heathrowairport or www.twitter.com/lufthansa _USA to see the latest alerts. How do you find out the relevant information? Go to Google and search on "Twitter" and the name of your airline. Example: Twitter Delta gets you or www.twitter.com/deltaairlines.

Airlines prioritize their long-haul flights, and you can use that fact to strategize.

During a winter storm, you may be rebooked on a flight that is doomed to being canceled, too. One way to figure out the odds of whether one flight is more likely to be canceled than another is to check if it is a long-haul flight (across the ocean) or a short-haul flight (between Seattle and Denver). Long-haul flights are more likely to fly. Airlines would rather get their large, profitable planes in the air than their smaller planes, which carry fewer passengers, obviously. If an airport tells an airline, "We've only de-iced one of our runways, so you have to choose which of your two planes you want to fly out," the airline will pick its biggest plane flying the greatest distance—more often than not. So when a gate agent offers you a choice of rebooking options, you're usually better off picking the bigger plane going the farthest distance to an airline's hub airport. (There are exceptions, of course.)

No planes flying out for days to your destination? Ask if you could fly to an alternate airport.

If flights to your home airport are unavailable for days, you may be able to fly sooner to a different airport and then drive to your home. Let a gate agent know if you are flexible. In my case, a London to New York City ticket became a London to Dusseldorf to Frankfurt to Washington, D.C., to New York City journey. This route was knottier and tiring, but it spared me from being stranded at an airport overseas during Christmas. Flights to Washington, D.C., happened to be in less demand than flights to New York City, and once I was in the U.S. I could find a way to get to my family's house. Using weather.com, I quickly found out that conditions were better at D.C., than Newark—which was being buffeted with high winds.

Luggage can ruin your day.

I faced a dilemma about what to do with my bags. It was the morning, and I was at Frankfurt Airport. Nearly every flight to the U.S. scheduled to fly before noon had been canceled. A gate agent offered to book me on a 1 o'clock flight. What were the chances that the 1 o'clock flight would also be canceled? If I checked my bags, and then the flight was canceled, I would have to stand in line to reclaim my bags before I could be rebooked onto another flight, which would make it even less likely I would make it home in time for Christmas. But the odds were awful on the other side of the bet, too.

I kept my bags, and then waited until two hours before the flight, when it seemed likely that the plane would truly take off. But I had waited too long. The line for checking bags was at least three hours' long, with about 400 people in it. There was no way I would board the plane in time. Luckily, I did some sleuthing and found a shorter, less-well-known line for checking bags—back outside of the Frankfurt Airport, "curbside," at the adjacent train station—and managed to make it back through security and to the gate in the nick of time.

Trips gone bad: What to do

Why airlines cancel some flights and not others