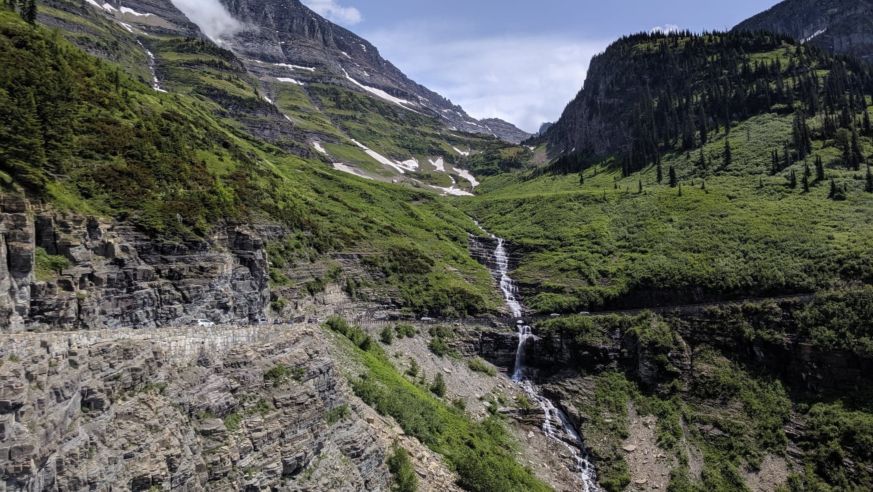 For fans of manageable road biking excursions that combine jaw-dropping scenery with a moderate athletic challenge, these routes are tops.

Whether you’re looking to take a cycling-centric vacation or just include some skinny-tire time while you’re out exploring, the best routes are those that combine moderate climbs (and the blissful descents that follow) with natural beauty and an ineffable sense of wonder.

With that criteria in mind, we’ve assembled some of our favorite rides—including a range of geographical regions in North America from eastern Canada down to Mexico City. These are intended for road bikes (a.k.a. the bikes with thin tires), and for cyclists with some experience—though each of these cool routes can be managed by newbies who are traveling with relatively experienced cyclists.Going-to-the-Sun Road

When it comes to pinch-me vistas and wildlife encounters, it’s difficult to beat the Going-to-the-Sun Road, in Montana’s Glacier National Park. Start your trek at Apgar visitor center, not far from the park’s West Glacier entrance. You’ll cover 32 miles from Apgar to the continental divide at Logan Pass, climbing around 3,000 feet over the course of the ride. Plan on several hours to reach Logan, because you’ll encounter many fine reasons to stop along the way: Avalanche Creek, the Trail of the Cedars, and many scenic overlooks where you’ll see the valley below growing smaller and smaller, snowy peaks (often even in July), and chance sightings of black bears, grizzlies, and moose. If you still have the legs for it, there’s a great hike at Logan Pass up to Hidden Lake Overlook, where you’ll almost certainly spot mountain goats. And, of course, the ride down from Logan back to Apgar is all downhill. When you arrive back at Apgar Village, celebrate with a feast at Eddie’s restaurant, and save room for a huckleberry ice cream or pie.

The Green Mountains, with their gentle slopes and namesake hue (which transforms into blazing reds, yellows, and oranges in autumn), define much of Vermont’s landscape. Even folks who have yet to visit will recognize the mountains as the backdrop of many of Grandma Moses’s most famous paintings. The Green Mountains Loop goes well beyond the mountains, allowing cyclists to begin in Burlington and, if they choose, end there as well, having explored not only Vermont but also portions of New Hampshire and the Lake Champlain shoreline in New York. The loop comprises more than 370 miles, and there are also alternates and offshoots worth seeing if you have time. The East Alternate, for instance, passes through the charming small town of Peacham, the kind of Platonic ideal of a New England town you might expect to see in a Norman Rockwell.

This may be the most ancient cycling route you’ll ever attempt. The Natchez Trace Parkway essentially existed centuries before the notion of a “parkway,” as a trail through the forest used by Native Americans. These days, you’ll share the road with relatively moderate or sparse auto traffic, and you’ll savor the forestland, waterways, and waterfalls along the way. Rest your head at an array of B&Bs along the way, grab ample Southern cuisine, and choose campsites that will be populated by fellow cyclists—and some campgrounds are actually bicyclists-only. If you make the entire trip, which connects Natchez, MS, to Nashville, TN, you’ll cover 444 miles of gentle grades.

A great route for outdoor enthusiasts and historians alike, the Katy Trail runs more than 230 miles across the state of Missouri, about half of it following the route that Lewis and Clark tpokl up the Missouri River on their exploration of the Louisiana Purchase. Keep an eye out for eagles as you cycle this relatively flat trail that takes you past farms and fields and small towns. It’s the longest rails-to-trails project in the U.S., having converted the former Missouri-Kansas-Texas (MKT) railroad line into prime space for hikers, runners, and cyclists. (If you’re keen on traversing the entire continential U.S. on two skinny wheels, the Katy Trail is often included in cross-country treks along the Lewis & Clark route and the American Discovery Trail.

Tucson, AZ, is something of a cyclists’ mecca, with a great climate for outdoor activities snd some spectacular scenery and mountain trails. You’ll ascend the Catalina Highway to the top of Mount Lemmon—wear layers, because you’ll likely pass through a range of temperatures and weather conditions, including the possibility of snow at the Summerhaven resort at the top. You’ll enjoy coasting on the ride back down as well, but avoid the temptation to take the hairpins at top speed—you’ll want to arrive back in Tucson in one piece for dinner.

For anyone who has ever visited Santa Barbara, on the southern end of California’s central coast, the Pacific Ocean vistas and the Santa Ynez Mountains behind the city can be unforgettable. But there’s at least one cool secret up those mountains: Camino Cielo (“skyway”) is a ridge road with sweeping views. Of all the routes recommended in this story, Camino Cielo is the one that will demand the most energy and attentiveness: Expect steep climbs, switchbacks, and some rough terrain on your way to the top of Gibraltor Mountain. You’ll almost certainly agree it was worth the climb. (And on your way back to SB, you can reward yourself with a visit to one of the region’s excellent wineries.)

Canada’s finest cycling can be found in Québec Province, and the crown jewel is Route Verte (“greenway”), covering more than 3,000 miles (yes, you read that correctly) that includes mixed-use trails and cycling paths, and roads from the coast all the way to Montréal. As you might expect, the route offers many reasons to stop along the way, including Québec’s historic cities with their array of French food, wine, and friendly locals, and the extraordinary Parc National du Bic along the St. Lawrence Estuary, with its mountains and islands and capes.

How many national parks can you name that are located entirely within a major city? Desierto de los Leones is all within the Federal District of Mexico City, and the park supplies everything a cyclist might crave: the Sierra de las Cruces Mountains, scenic waterways, forests, and ample trails for cyclists. If cycling in a big city seems less adventurous than you might wish, bear in mind that hitting the open road in Mexico is often not as safe for inexperienced cyclists as it might be in the U.S. or Canada. Desierto de los Leones provides natural beauty in a setting where visitors can relax and enjoy the sights. And, contrary to what the park’s name might suggest, it is neither a desert nor a haven for mountain lions.)