Enraged at having his cigarettes confiscated, a customer shot and killed the owner of a restaurant in the southwestern town of Saruhanli, according to a report by Reuters earlier today. It's the first—and hopefully last—casualty since a nationwide ban on smoking inside bars, coffeehouses, and restaurants took effect on July 19.

Similar bans have caught on in places where smoking seemed stubbornly ingrained in the everyday culture (consider Paris, Rome, NYC, and more recently India), but Turkey has a daunting number of smokers to win over.

More than half the Turks aged 15 to 49 who were surveyed in a May 2007 Gallup poll said that they had smoked on the day before the survey. Among the 100 countries surveyed, the next up were Lebanon (41%), Greece (40%), and Cuba (40%). Official statistics say almost one in three adults smoke in Turkey.

On the other hand, recent surveys suggest overwhelming public support for the ban, and Prime Minister Recep Tayyip Erdogan, who the AFP describes as "a tobacco hater," has thrown his weight behind the issue.

City establishments will face regular inspections, with fines starting at $381 for a first offense; individuals who light up will be fined $45. With the smoke clearing, are you more likely to consider spending time in Turkey and its cafés?

Lights out: A total solar eclipse captivates millions in Asia

Reports are streaming in from the 21st century's longest total solar eclipse, which unfolded over more than six minutes on Wednesday morning. Special eclipse-viewing glasses were a common theme among spectators who gathered everywhere from the banks of the holy Ganges River to downtown Shanghai. Watching the sun temporarily disappear as the moon slips between the sun and the earth can provoke astonishing responses, as we noted in a story on how to witness the eclipse. The BBC reported on mixed reactions in India and Nepal, where some viewed the eclipse as a bad omen. Schools were closed in Kathmandu, and some pregnant women in Delhi hid indoors. The BBC's article includes photos, video, and a first-person account. The Lede blog has posted videos of the eclipse from several news agencies. A clip from Al Jazeera focuses on the Indian town of Taregna, an epicenter of the eclipse, where residents' enthusiasm about the event (and the related press attention) was dampened by overcast weather. Among the locally-based news coverage, Xinhua News Agency has posted photos from across China; The Japan Times shows kids in Hiroshima gazing skyward; and Bdnews24 reports that spectators at Panchagarh Stadium in northern Bangladesh broke out in applause and a standing ovation when the sun reappeared. Wish you'd been there in person? Six more total eclipses are on the horizon between 2010 and 2017, including one that will be visible in the U.S. Our eclipse-chasing story has details and route maps.

Moon pie, Tang, astronaut-shaped cheese&hellip; It must be the anniversary of the first moon landing. On July 20, our country marks the 40th anniversary of the successful Apollo 11 mission with celebrations nationwide. A favorite spot is Wapakoneta, Ohio, which is the birthplace of the first man to walk on the moon, Neil Armstrong, and home to the Neil Armstrong Air &amp; Space Museum. Wapak (as locals call it) has ramped up its annual Summer Moon Festival, which runs through July 20, for the occasion. Among the highlights are a July 18 cooking contest requiring one special ingredient: yes, Tang. Also on exhibit&mdash;and eventually set to be consumed&mdash;is the world's largest moon pie, at 55 pounds, 40 inches in diameter, and 6 inches high, with 14 pounds of marshmallow and 6 pounds of chocolate (we won't tell you how many calories!). See it on display July 17&ndash;18, with the tasting July 19&mdash;after the pie-eating contest, of course. And a moon celebration just wouldn't be complete without cheese or, say, a life-size astronaut made entirely of the stuff&mdash;1,800 pounds of it! Watch Sarah Kaufmann, a.k.a. The Cheese Lady, carve the six-foot-tall astronaut July 17&ndash;18, with an unveiling at the museum July 19. Note: This piece of food art will not be eaten. The festival will also host the debut of the limited-edition Lunar Lager beer today, July 16, courtesy of Akron, Ohio-based Thirsty Dog Brewing Company. Lunar Lager was created exclusively for the Wapak area's moonwalk celebration. On the more educational side, on July 19 the Neil Armstrong Museum will host a special NASA exhibit, from its Glenn Research Center in Cleveland, called "Journey to Tomorrow," which includes a lunar-landing simulator. The Neil Armstrong Museum will offer half-price admission ($4; free for Auglaize County residents) and special hours (noon&ndash;5 p.m.; the museum is usually closed on Mondays) on the official anniversary of the landing July 20. Regular exhibits include a 76-foot geodesic dome containing a theater experience of the sights and sounds of space, a moon rock Armstrong brought back, and the Gemini 8 spacecraft he flew in 1966, along with space suits and other memorabilia from his life and space career. Elsewhere in the country: The Kennedy Space Center in Cape Canaveral, Fla., where Apollo 11 was launched, will celebrate today, July 16, with the opening of the Apollo Treasures Gallery, which features rarely seen artifacts from the Apollo moon missions; on hand will be the second man to step on the moon, Buzz Aldrin, along with various other Apollo astronauts (visitor complex admission $38). In D.C., the Smithsonian National Air and Space Museum today will premiere "Alan Bean: Painting Apollo, First Artist on Another World," an exhibit of space-related paintings and drawings by Bean, an artist and Apollo 12 astronaut (runs through January 13). That day also has been dubbed Countdown to the Moon Day at the museum, with various educational activities for families throughout; it's also the home of the Apollo 11 Command Module (all museum activities are free). Houston, a.k.a. Space City, will be the setting for "Fly Me to the Moon: A Community Celebration of the First Lunar Landing" July 18, a free event featuring a 1960s-style picnic, an outdoor viewing of the moon landing on a giant screen, and astronomer-guided stargazing with telescopes. Seattle's Museum of Flight through September 7 is running the exhibit "Apollo 11: An Artist's Perspective - Original Sketches from NASA Artist Paul Calle," featuring the work of Calle, who documented the activities of the Apollo 11 astronauts in the hours before their historic flight (admission $14). Visit NASA's 40th anniversary website for more events nationwide. If you can't make it to one of these celebrations, you can relive the Apollo 11 mission "live" at wechoosethemoon.org. Launched today at 9:32 a.m., exactly 40 years to the minute from the launch, the site will post archival audio, video, and photos coordinated with the timeline of events in 1969. Users can sign up for "real-time" updates of events and follow the progress via Twitter. The site is a project of the John F. Kennedy Presidential Library and Museum.

Statue of Liberty: Crown tickets sold out until September

As we reported a few weeks ago, the Statue of Liberty crown is accessible once again after almost eight years. Tours started up July 4, and the holiday weekend was sold out. Planning a trip? Be sure to make reservations in advance. We did a search and discovered that crown tickets are currently sold out until September 15! You can still get to the pedestal area and museum, but if you want the crown, better plan now. Many thanks to reader Henry, who commented on a previous post with this news. The cost for adult admission is $15, including the cost of the $12 ferry ride and access to the rest of the national park. 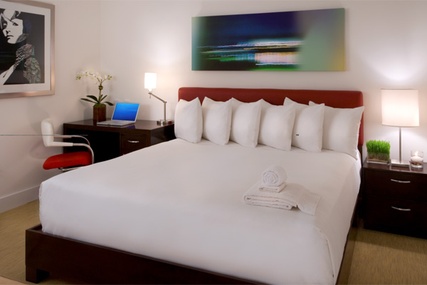 NYC: The MAve Hotel opens July 2, with a discount

It's not so easy to open a sleek boutique hotel these days in Manhattan, where room occupancy is down and practically everything's on sale. The new MAve Hotel has taken note and trimmed rates to lure guests. An Urban Full (full-size bed) starts at $169 and a Madison (queen-size bed) at $189 through September 7, plus the Stay NYC Style promotion gives you a third night's stay for free until mid-August. Seize the moment as the MAve's current plan calls for rates to jump to $249 for an Urban Full and $269 for a Madison. The 72 rooms have modern graphic art, 32" HDTVs, H20 bath products, and velour bathrobes. Wi-Fi is included, as is breakfast&mdash;and that's no stale roll and weak coffee, as a hotel rep pointed out to me. Artisanal, a nearby French bistro with its own cheese caves, supplies three kinds of cheeses, four breads, and same-day roasted coffee beans. The MAve, which rhymes with "wave" and references Madison Avenue, got its name by popular online vote. It's a few blocks north of the landmark Flatiron Building and Madison Square Park, where you can brave the Shake Shack's notoriously long lines. 62 Madison Ave., near 27th St., 212/532-7373, themavehotel.com, a part of the Desires Hotels collection. MORE NYC HOTEL COVERAGE The stylish Ace Hotel opens, with rates from $99 New York City: A gem of a hotel A cool new hotel for under $100 is adding rooms New York City hotels at a price that's right