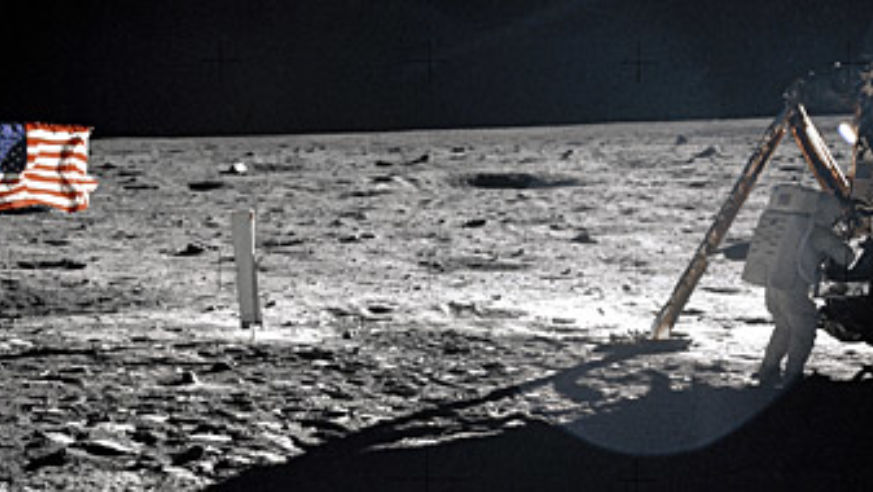 Moon pie, Tang, astronaut-shaped cheese… It must be the anniversary of the first moon landing.

On July 20, our country marks the 40th anniversary of the successful Apollo 11 mission with celebrations nationwide.

A favorite spot is Wapakoneta, Ohio, which is the birthplace of the first man to walk on the moon, Neil Armstrong, and home to the Neil Armstrong Air & Space Museum. Wapak (as locals call it) has ramped up its annual Summer Moon Festival, which runs through July 20, for the occasion. Among the highlights are a July 18 cooking contest requiring one special ingredient: yes, Tang.

Also on exhibit—and eventually set to be consumed—is the world's largest moon pie, at 55 pounds, 40 inches in diameter, and 6 inches high, with 14 pounds of marshmallow and 6 pounds of chocolate (we won't tell you how many calories!). See it on display July 17–18, with the tasting July 19—after the pie-eating contest, of course. And a moon celebration just wouldn't be complete without cheese or, say, a life-size astronaut made entirely of the stuff—1,800 pounds of it!

Watch Sarah Kaufmann, a.k.a. The Cheese Lady, carve the six-foot-tall astronaut July 17–18, with an unveiling at the museum July 19. Note: This piece of food art will not be eaten. The festival will also host the debut of the limited-edition Lunar Lager beer today, July 16, courtesy of Akron, Ohio-based Thirsty Dog Brewing Company. Lunar Lager was created exclusively for the Wapak area's moonwalk celebration.

On the more educational side, on July 19 the Neil Armstrong Museum will host a special NASA exhibit, from its Glenn Research Center in Cleveland, called "Journey to Tomorrow," which includes a lunar-landing simulator.

The Neil Armstrong Museum will offer half-price admission ($4; free for Auglaize County residents) and special hours (noon–5 p.m.; the museum is usually closed on Mondays) on the official anniversary of the landing July 20. Regular exhibits include a 76-foot geodesic dome containing a theater experience of the sights and sounds of space, a moon rock Armstrong brought back, and the Gemini 8 spacecraft he flew in 1966, along with space suits and other memorabilia from his life and space career.

Elsewhere in the country:

The Kennedy Space Center in Cape Canaveral, Fla., where Apollo 11 was launched, will celebrate today, July 16, with the opening of the Apollo Treasures Gallery, which features rarely seen artifacts from the Apollo moon missions; on hand will be the second man to step on the moon, Buzz Aldrin, along with various other Apollo astronauts (visitor complex admission $38).

In D.C., the Smithsonian National Air and Space Museum today will premiere "Alan Bean: Painting Apollo, First Artist on Another World," an exhibit of space-related paintings and drawings by Bean, an artist and Apollo 12 astronaut (runs through January 13). That day also has been dubbed Countdown to the Moon Day at the museum, with various educational activities for families throughout; it's also the home of the Apollo 11 Command Module (all museum activities are free).

Houston, a.k.a. Space City, will be the setting for "Fly Me to the Moon: A Community Celebration of the First Lunar Landing" July 18, a free event featuring a 1960s-style picnic, an outdoor viewing of the moon landing on a giant screen, and astronomer-guided stargazing with telescopes.

Seattle's Museum of Flight through September 7 is running the exhibit "Apollo 11: An Artist's Perspective - Original Sketches from NASA Artist Paul Calle," featuring the work of Calle, who documented the activities of the Apollo 11 astronauts in the hours before their historic flight (admission $14).

If you can't make it to one of these celebrations, you can relive the Apollo 11 mission "live" at wechoosethemoon.org. Launched today at 9:32 a.m., exactly 40 years to the minute from the launch, the site will post archival audio, video, and photos coordinated with the timeline of events in 1969. Users can sign up for "real-time" updates of events and follow the progress via Twitter. The site is a project of the John F. Kennedy Presidential Library and Museum.