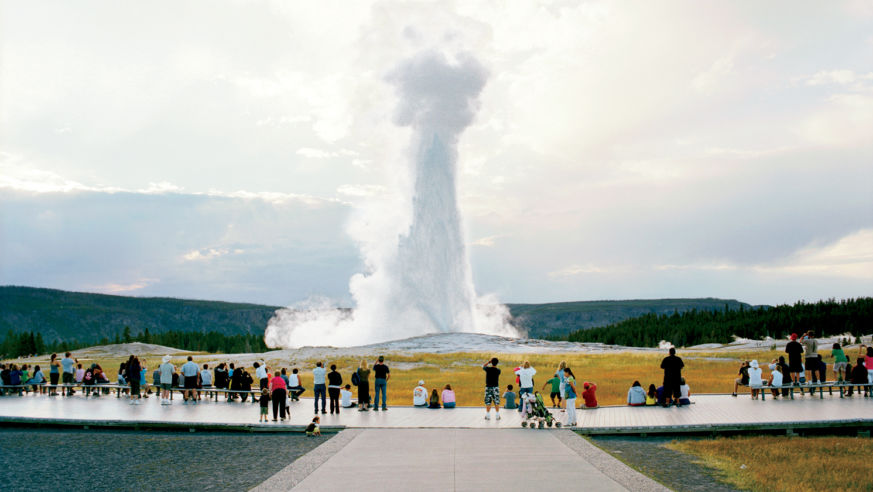 Yellowstone National Park gets millions of visitors each year. We spotlight six types of families who recently made the trip.

When it comes to family travel, few vacations fit all. Some clans are theme park junkies, or sybarites, or scholars. And then there's the rest of us, simply looking to catch up with relatives and friends in a relaxing setting. Fortunately, a world full of getaway possibilities awaits-and one of those, Yellowstone National Park, manages to satisfy pretty much everybody. Straddling the borders of Wyoming, Montana, and Idaho, the world's first national park is so vast and varied in its attractions (exploding mud pots, roving wolf packs, bison burgers...) that something would be wrong with you if you walked away unimpressed. Last August, during Yellowstone's second summer in a row of record visitors (more than 3.6 million), we joined the crowd. Consider this our unscientific survey of the many ways families travel now.

The Family Adventurers
When the Yings gather for a reunion, all ages bring their talents to the table. They hold contests to see who has the biggest beer belly and the longest leg hairs; they teach each other how to work a Chinese yo-yo; and, at the end of each day, they pack into a room and tell family stories. The latter often involves tales of Sue and C.N. Ying, the adored matriarch and patriarch, who had 10 kids and instituted a travel tradition in the 1970s. For their first reunion in 1977, they chose Yellowstone. Since then, there have been cruises, trips to D.C. and Lake Tahoe, and a giant celebration in honor of C.N.'s 100th birthday at the Tanglewood resort in Texas's Eisenhower State Park. C.N. lived to 102, and Sue passed away just last fall at 103. A group of 16 in total made it back to Yellowstone last summer, bunking in cabins at the Old Faithful Snow Lodge. Each day was filled with reflection. Says granddaughter Cathryn Wang, "We knew where to go because we brought our old photos and, at each spot, we recreated the shots."

The  First Timers
Sisters Judy and Audrey Visser are still at the pony-ride stage, but their parents, Lori and Art, are practiced equestrians-and travelers. The couple spent a decade hopping planes and trains before taking two momentous trips to China, where they adopted their daughters. In the years since, Lori, a director of accounting, and Art, a salesman, have focused on domestic trips. To date, they've visited the Hawaiian island of Kauai, Alabama's Dauphin Island, and the Outer Banks of North Carolina. The Vissers planned last summer's inaugural national-park trip for late in August, hoping to avoid the crowds that peak earlier in the month. For full immersion, the Vissers, along with Lori's sister Pam Hagerman, stayed in cabins at Lake Lodge, whose cafeteria overlooks Yellowstone Lake, with 141 miles of shoreline. The highlight for all was the day the girls got cowboy hats at the old Roosevelt Lodge, a cabin enclave reminiscent of Little House on the Prairie. With their aunt, the girls took a chuck wagon ride, culminating in a campfire dinner, where Lori and Art, riding in on horseback, joined them. Judy and Audrey keep the hats on their bedposts at home, ready for their next adventure.

The Learners
There are certain facts about the park that Liza Dable, her husband, Dan, and their two boys, Benjamin, 9, and Jonathon, 11, are unlikely to forget. They know that Yellowstone is one of the world's largest calderas, measuring 45 by 30 miles, which also means it's a volcano-hence all those geysers and hot springs. And in a place of incredibly dramatic views, the Dables say few sites top Artist Point, overlooking the falls at the Grand Canyon of the Yellowstone River. "It was Thomas Moran's paintings of the falls that convinced Congress in the late 1800s to preserve the area as a park," Liza explains. The Dables picked up these details and more by taking part in Yellowstone for Families, a four-day guided course offered twice a week throughout the summer by the park's nonprofit educational arm, the Yellowstone Association Institute. This was the first vacation the Dables have taken that was fully run by someone else-down to the family photos. Each of the six kids in their group  used a camera (provided by the park) as they learned to identify everything from petrified forests to elk scat. On the last night, the program capped off with a photo show of everyone's work. "There was a perfect balance between organized activities and free time," says Liza, a quality-control manager. "Our boys got so much more out of this trip than they would have if they were just hiking around with Mom and Dad."

The Campers
Getaways are a rare treat for the Simpsons because all three are currently in school: Mom Dori is a double major in Spanish and French at Eastern Washington University, outside Spokane; Dad Steve, a drill sergeant in the Army Reserve, is studying to become a nurse practitioner; and 10-year-old Naomi is finishing fourth grade. When they do manage to escape, there's never any question where they'll be staying: in a tent. Vacation for the Simpson clan means camping, typically at a Washington state park, such as Dash Point on the Puget Sound. For Dori, these trips are also sentimental journeys, complete with a collection of 1970s equipment from her childhood. There's the two-burner propane stove on which, like her mother, she whips up pancakes and campfire stew; a trusty Coleman lantern; and the duct-taped canvas tent that she and her five siblings always shared. The family's two nights in Yellowstone were a lark, planned six hours in advance as they drove home from a family wedding in Houston. They stayed at the Grant Village campground, one of the biggest in the park, with 400 campsites, bathrooms, and-most important-showers: "We may love camping, but I draw the line at primitive," says Dori. "After all, this was our summer vacation."

The Staycationers
As rangers at Yellowstone, Beth Taylor and Ivan Kowski estimate that a mere 5 percent of visitors venture off the walkways onto the 1,000 miles of trails. Beth works in the education department, teaching people to identify jackrabbit footprints and fairy slipper orchids. And out of Yellowstone's Backcountry Office, Ivan oversees 301 spectacularly situated campsites, each reachable only by foot, boat, or horseback, and free for the asking. The family lives in tiny Gardiner, Montana, just outside Yellowstone's north entrance. During the five-mile drive to school and work each morning, they tally the animal sightings: bald eagles, bighorn sheep, elk, and the occasional moose. On the weekends, there's the world's largest collection of exploding geothermal oddities to explore. Maya's favorite is Anemone, a geyser that, according to her, "fills up with water and then flushes like a toilet." Like everyone else, they love to stop at the Old Faithful Inn, the park's landmark lodge, for people-watching and ice cream cones. "Locally made ice cream-by Wilcoxson's, of Livingston, Montana-is sold at all the parks' general stores," Beth says. "It's outstandingly good."

The RV'ers
Johanna and David Swidrak are hands-on types: He's an artist and contractor whose business slogan is "CPR for Your Home," and she homeschooled their two girls for nearly a decade. Five years ago, when a neighbor in Bend, Oregon, posted a for-sale sign in the window of a 1992 40-foot Fleetwood RV, they saw a chance to take vacations into their own hands, too. Johanna's mother chipped in toward the purchase and uses the parked RV as her quarters when she visits for a month every summer. David's father and stepmother, who live in Tucson, have their own RV, and the two groups often convoy. At least once a year, the family takes a big outing; their favorite was the triple-header to Bryce Canyon, Zion National Park, and the Grand Canyon. (True, the trailer gets only 15 miles to the gallon, but there have been surprisingly few hidden costs.) David's parents were along for this particular adventure and parked a few pine trees away at Grant Village, one of 12 Yellowstone campgrounds with RV areas. The group biked and hiked by day, and barbecued and played card games by night. To celebrate Starla's 11th birthday, Johanna baked a chocolate cake in the RV oven, and they all sang around a bonfire built by David. Says Johanna: "Wherever we go, it's so nice to have our own place-and pillows!-to return to."