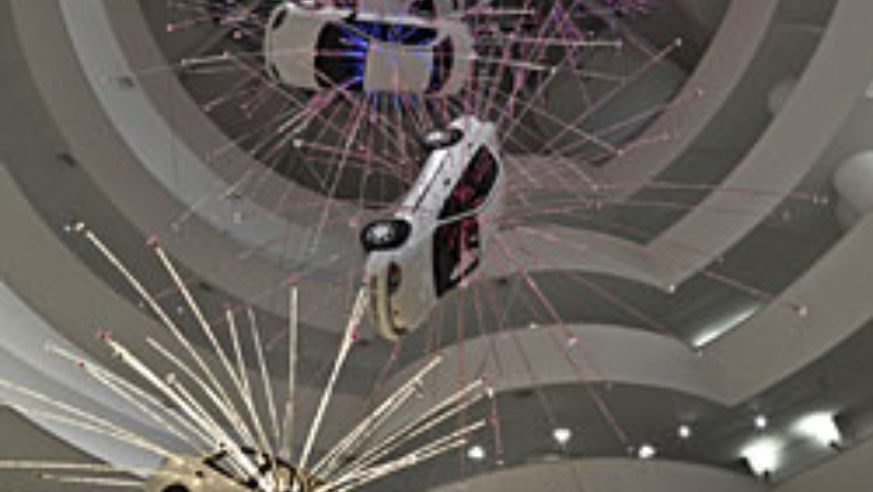 A headline-grabbing exhibition of 80 works by Cai Guo-Qiang, known for his pyrotechnic displays and gunpowder drawings, opens today at New York's Solomon R. Guggenheim Museum. It's the first time the Guggenheim has devoted a retrospective to a Chinese-born artist.

On view through May 28, Cai Guo-Qiang: I Want To Believe spans two decades and features eight major installations, including Inopportune: Stage One (2004). First created as a horizontal display at the Massachusetts Museum of Contemporary Art, the nine cars have been reconfigured to hang from the ceiling of the museum's Frank Lloyd Wright-designed rotunda.

The result is both stunning and unnerving. Suspended by cables, seven white Chevrolet Metro sedans are pierced with tubes of blinking yellow, red, green and blue lights to simulate the stages of a bomb explosion. They appear to be floating in mid-air as the cables aren't very visible. An eighth car is parked in the lobby; the ninth car occupies the sixth floor.

As you walk up the ramps in the museum's rotunda, you'll pass other installations that include nine life-size tigers, 99 life-size wolves, and 75 clay sculptures. The top three levels showcase canvases streaked with gunpowder and ink.

Cai is putting his talents to work as director of visual and special effects for the opening and closing ceremonies of the Beijing Olympics. If his past work is any indication, the ceremonies are going to blow us away.