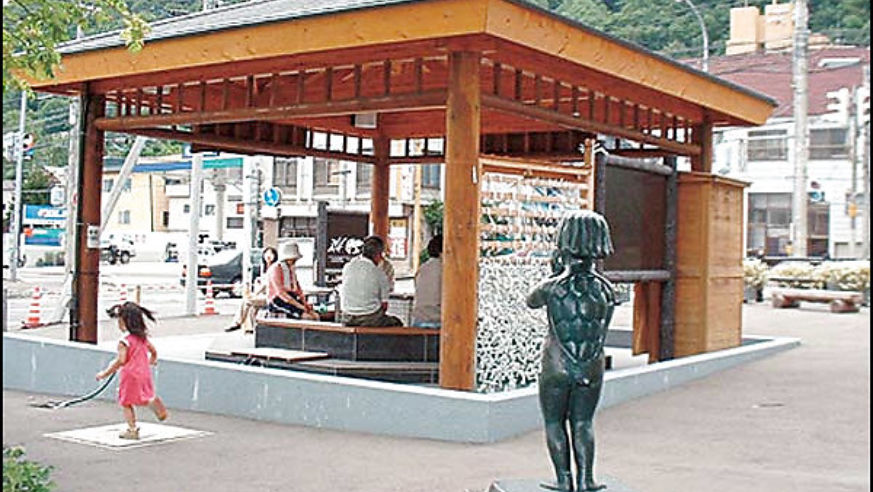 Courtesy Jozankei Tourist Association
Jozankei is also home to two handbaths, believe it or not

Everyone wants to know about the "next great places." But rather than simply make up a list, we turned to the people who explore for a living--for companies such as Starbucks, W Hotels, Trader Joe's, and Lonely Planet. Get ready for a serious case of wanderlust (not to mention job envy).

Lonely Planet now sells more than 6 million guidebooks annually. With all that success, it's no wonder that Tony Wheeler--who founded the company in 1973--spends six months of the year searching for new regions to report on. "I like places that are on the edge even if they're not going to be seriously visitable for awhile," he says.

He means places like the Simpson Desert, the majority of which is in the southeastern corner of Australia's Northern Territory. It spreads out over 50,000 square miles of uninhabited red-sand ridges. "It's surprisingly beautiful country with a lot of vegetation," he says, "and if you're lucky, plenty of wildlife."

Most folks begin in Alice Springs, then head south, starting their eastward desert crossing at Dalhousie Springs. Officials advise a caravan of at least two four-wheel-drive vehicles--in case one breaks down--and a UHF radio or satellite phone to call for help if necessary. "Between Mount Dare and Birdsville there's no habitation, no campsites, no hotels, no fuel, no water, and no help if you hit problems," says Wheeler. "When you want to stop, just pull over and set up your tent." The light at the end of the desert is the Birdsville Hotel. "The celebratory cold beer there is one of the highlights of the trip." Australia 4 Wheel Drive Rentals: 011-61/88-94-53-338, australia 4wheeldriverentals.com, from $93 per day. Desert Parks Pass available from South Australia's Department for Environment and Heritage: 011-61/88-64-85-300, parks.sa.gov.au, $71.

Souri is on the road at least four months of the year, leading tours, looking for villages in need of aid, and working with outfitters and the Red Cross. "Everything I did before this"--he was an international-event planner, a special-effects producer for The Matrix and X-Men, and a commercial director in China--"gave me the skills to run Relief Riders International."

While in Rajasthan, Souri stumbled upon the village of Mahansar in the Shekhawati region, an area in the triangle formed by Delhi, Jaipur, and Bikaner that's famous for its havelis (traditional residences) decorated with colorful frescoes. "You get a sense of grandeur, of something old that's slowly decaying by time, not by development," he says. Some of Mahansar's best frescoes are on three vaulted ceilings in the Sona Ki Dukan Haveli. The gold-leaf paintings depict scenes from the Ramayana and Gita Govinda. (Ask nearby shops for a key; donations welcome.) A few rooms in the Narayan Niwas fort, built in 1768, still contain frescoes, as well as antique rugs and carved wooden doors. Conveniently, it's now a hotel. Narayan Niwas Castle: 011-91/1595-264-322, from $26.

On Aaron Richter's first day in Inami, it started pouring. He ducked into a shop, then looked around. The shop stocked one thing--umbrellas.

Richter was in the mood to appreciate serendipity. It was 2002, right before he started working at W Hotels Worldwide, where he's now the senior director of design. He had taken some time off after his mother passed away. "I had to get across the planet," he says. "An inner journey, or something like that." Unlike the relentless, meeting-driven travel he does now--in July he went to Brussels, Qatar, and Istanbul, "and that was actually kind of a light month"--Japan was all about wandering. He was there for five weeks, mostly in Kyoto, and visited Inami for three days.

It was an architectural pilgrimage. "The town has a history of woodworking," he says, "and there's the Inami Woodcarving Museum, designed by Peter Salter." But what he took away was less about architecture than craftsmanship. "Wherever you walk, you'll catch someone's studio out of the corner of your eye. People are very friendly, and accommodating about showing their work. They're proud of it, and rightfully so."

Josh Berman, owner of Level 1 Productions, went to Hokkaido, the northernmost island in Japan, to film Long Story Short, the latest of Level 1's seven freeskiing films. When they weren't on the mountain, he and his crew whiled away time at the footbath hot springs in Jozankei, a small town outside of Sapporo. "It's completely outdoors, but under a roof, and about a foot deep. You take off your shoes, roll up your pants, and put your feet in. We sat there for an hour and a half with snow falling around us."

Jozankei is home to three free footbath locations, including Tarono-yu ("Footbath for Friendship") and Ashitsubono-yu ("Footbath for Longevity and Health"). The natural springwater and stones embedded in the floor are meant to soothe the feet, especially after they've been exposed to extreme cold--perfect for backcountry skiers who've been up to their waists in powder.

For those who'd like to soak more than tootsies, several hotels in the area, like the Jozankei View Hotel, have their own private hot springs for guests, and also offer day visits. The town's namesake natural hot spring was discovered more than 130 years ago along the Toyohira River by a monk named Jozan. Today, it's a retreat where, besides soaking, you can hike several trails. Jozankei View Hotel: 011-81/11-598-3223, from $73 per night, $7 day pass. Jozankei Tourist Association: 011-81/11-598-2012, jyozankei.com/english.

Another of the Rosses' top spots isn't for the claustrophobic: It involves a very long ride through a very dark tunnel.

An overnight trip to Kong Lo is a highlight of Journeys Within's monthlong tour on the Mekong River, which takes guests from China's Yunnan province to Ho Chi Minh City in Vietnam. "Halfway through, in Laos, we travel by minibus from Vientiane to a tributary of the Mekong, where we board long-tail boats and motor upstream to the Sala Hin Boun Ecolodge," explains Brandon. Accommodations are basic, but the surroundings are stunning, and each room has a river-view balcony. The next morning, the tour heads upriver and transfers to smaller boats that go to Kong Lo Cave. "After we clamber over rocks to get around the rapids at the cave's entrance, the boatmen navigate two and a half miles with only flashlights." At times the cave is more than 300 feet wide, and equally high; it's full of stalagmites and stalactites. "On the other side, you enter a kind of Shangri-la, separated from the outside world by the huge mountain you've just passed through," says Brandon. "When Andrea and I first stumbled upon Kong Lo, we loved the feeling of being modern-day explorers." Journeys Within: 877/454-3672, journeys-within.com, Mekong Experience $5,450.

A resort area in Myanmar (formerly known as Burma) that's only just opened to tourists, Ngwe Saung is less well-known than the popular beaches of Ngapali. "It has gorgeous white sand, great diving and snorkeling, and wonderful seafood," says Andrea Ross, who founded Journeys Within with her husband, Brandon. "There are a few big hotels, but we prefer The Palm Beach Resort. It's privately owned and has lovely beachfront bungalows."

One can easily see why relaxation would appeal to the Rosses. Three years ago, they sold their house in California and moved to Cambodia, a country they'd fallen in love with when backpacking the year before. They opened a B&B in Siem Reap, and launched tours. And in 2005, they had a daughter, Callie.

Instead of driving the five hours from Yangon, Andrea suggests a boat ride on the Irrawaddy River. "Take an overnight Delta Queen cruise from Yangon. The 14-cabin boat drops you off about 45 minutes from the beach and an included transfer by car or bus gets you the rest of the way." Andrea is excited about offering Ngwe Saung to clients. "A few days there is a great finish to a tour of Myanmar. You're often the only person on the sand." The Palm Beach Resort: 011-95/150-1937, thepalmbeachresort.com, from $140. Delta Queen: 011-95/139-2552, myanmar-rivercruises.com, $250 each way.

"There's almost nothing I won't eat," says Lori T. Latta. She's one of 15 category leaders for Trader Joe's, the grocery chain; she travels the world looking for new flavors and foods. "Last year I went to Norway three times on a special salmon project," she says. "But recently I've been focusing on Southeast Asia." After sampling food from farmers' markets and restaurants, she tries to put aside at least one day of her trip to do something different: "Why not go a little bit farther?"

Ko Similan is one of nine virtually uninhabited islands in the Similan chain, 62 miles northwest of Phuket. The islands were designated a Thailand National Park in 1982. Latta first heard of Ko Similan's world-class snorkeling and diving while researching cashews in the southern part of the country. "You can't get in the water without being among amazing fish and wildlife," she says. "Plus, the water is the most unreal shade of blue." Similan Diving Safaris runs day trips from Khao Lak, north of Phuket (from $111), and four-night all-inclusive Similan diving trips ($496): 011-66/76-48-54-70, similan-diving-safaris.com.