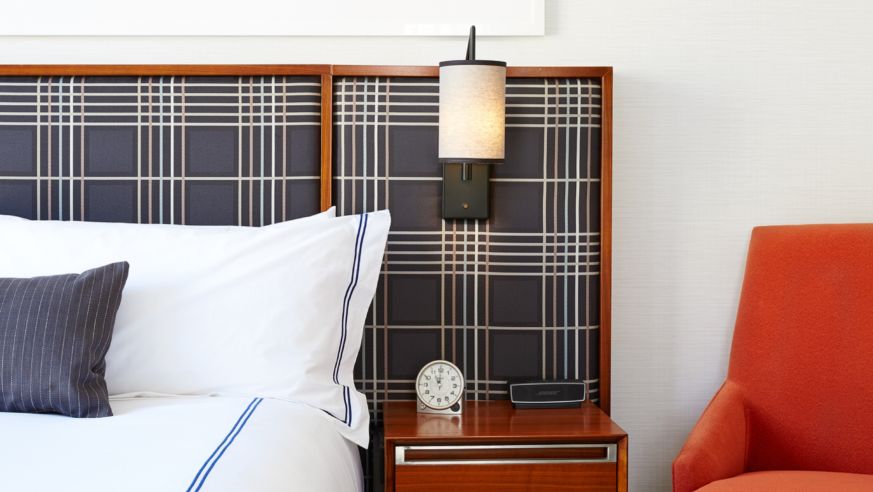 The Freedom Trail runs around and adjacent to hotel's Downtown Crossing, a centrally located maze of mostly retail-lined streets, but the district, just up the street from Chinatown and Emerson College, is anything but fusty. The old-world architectural details of many of the buildings are preserved, but otherwise it's a thoroughly modern shopping area with "ambassadors" lingering on the partly cobblestone streets to guide visitors and outdoor tables for loitering in warmer months. In other words, it's a welcoming area for tourists visiting the city who want to stay in luxury just steps from American history.

The Godfrey, a small national boutique hotel chain, has its flagship property in Chicago. Boston, which has 242 rooms and opened in 2016, is the second property. Others include Tampa and LA.) It's located in two thoughtfully combined and renovated 110-year-old buildings that are listed on the National Historic Registry. Having once housed corporate textile and fabric trade offices on the upper floors and retail outfits on street level, they're credited with having had a historical impact on the city's once lively commerce.

Despite being located in a densely-packed urban center, the rooms, which are appointed in neutral shades of grey, beige, charcoal and green, with tartan headboards tossed in for good measure, get plenty of light thanks to floor-to-ceiling windows. Rooms range in size from a standard size to a slightly larger double queen (two beds) to a larger studio king, which features a pullout couch, to sprawling corner suites on the top floor. Mini-fridges are not set up in the standard rooms, but they're available upon request, a thoughtful way to cut down on energy, an underlying mission at the property. The hotel pulled out all the stops where technology is concerned. Each room has a 55-inch LCD televisions with smartphone-to-TV streaming capability for your own Netflix and Hulu accounts, Bluetooth-compatible Bose wireless speakers, and Keurig coffee makers. Spacious bathrooms have a luxurious feel, plenty of counter space, and neat design touches like deep basin sinks. High speed WiFi and bottled water are free.

Suffice it to say you can’t be more centrally located in Boston than Downtown Crossing, a mix of gorgeous historic buildings and lots of familiar stores. There’s a number of restaurants and pubs nearby, and Chinatown is a few blocks away, but it’s primarily a retail district, so it’s very quiet late at night. The hotel is walking distance from the sprawling Boston Common and a stone’s throw from all four subway lines. (They’re designated by color here: the Red Line, Green Line, Blue Line, and Orange Line.)

The Godfrey is certainly not a big property by hotel standards, but when you hear about its varied eating and drinking options, you'd be forgiven for thinking otherwise. First things first: coffee. A George Howell Cafe is connected to the lobby. Howell's name may not be as familiar as Howard Schultz's but it should be. In the 1970s, long before Starbucks, Howell founded the Coffee Connection and pioneered the specialty coffee movement, even coming up with the Frappuccino, which he based on the frappe, a classic New England milkshake. The drink became part of Starbucks' repertoire when the company bought Coffee Connection in 1994. Today the cafe features a range of specialty drinks and locally made pastries and sandwiches. Baristas explain the nuanced flavors of different single estate beans. The dinner option is Ruka, a creative Japanese-Peruvian fusion spot that features creative dishes and drinks in a lively, colorfully appointed space. And for a nightcap--or afternoon tipple--the lobby bar, helmed by forward-thinking barmen, offers seasonal cocktails amid the marble columns of the high-ceilinged space, which has tall windows facing the buzzy street. Belly up to the marble bar or hunker down on one of the stylish chairs or couches.

There's a 24/7 fitness center, but the hotel offers other outdoor options for getting active, too. You can borrow a bicycle for free or tag along with the "running concierge," who'll lead you on a fast-paced tour through the Boston Common or along the harbor.