The Best Roller Coasters in America

By Jeanine Barone
August 15, 2019
Image courtesy of Cedar Point
​Hop aboard, buckle up, hang on and prepare to scream because, whether you’re a hard-core risk taker or you approach thrill rides with some trepidation, there’s a roller coaster for you.

Roller coasters give you the opportunity to spend a sunny summer day staring death in the face. They come in all sizes, speeds, types, layouts, and track materials. With some, the ride experience is profoundly terrifying, leaving you shell shocked.

Others induce an exhilarating sense of panic that’s addictive. What all coasters have in common, however, is that they assault the senses, sending your adrenaline levels off the charts. And once you walk away, you can say you survived a brush with death. No wonder coasters provoke such infatuation.

Riders shoot through tunnels, crest hills, and veer past lagoons on this steel coaster that’s for those who crave speed, lots of airtime and heights. The first ascent offers panoramic views of the park as well as Lake Erie, which might be enjoyable if it weren’t for that slight feeling of doom. This initial climb leaves riders shaking as they ascend at an impressive 45-degree angle.

Once at the top, all that’s left to do is gape straight down from a more than 300-foot perch. Then riders are catapulted down at close to a 90-degree angle at an astounding 93 mph. Coaster devotees are particularly keen on the sustained G force on a turn that’s banked at a max of 100-some degrees.

This steel coaster was made for those who want to be scared silly, starting before they even board. After all, the coaster’s enormous U-shaped track can be seen from just about anywhere in the park, towering some 45 stories above the ground, and making it one of only two coasters in the world that plunge at least 400 feet.

In a dumbfounding 3.5 seconds, the train accelerates from 0 to 128 mph, rocketing up at a 90-degree angle. And then, it swoops down in a brain-scrambling 270-degree spiral. The terrifying ride is intense but short, over in a mere 28 seconds. 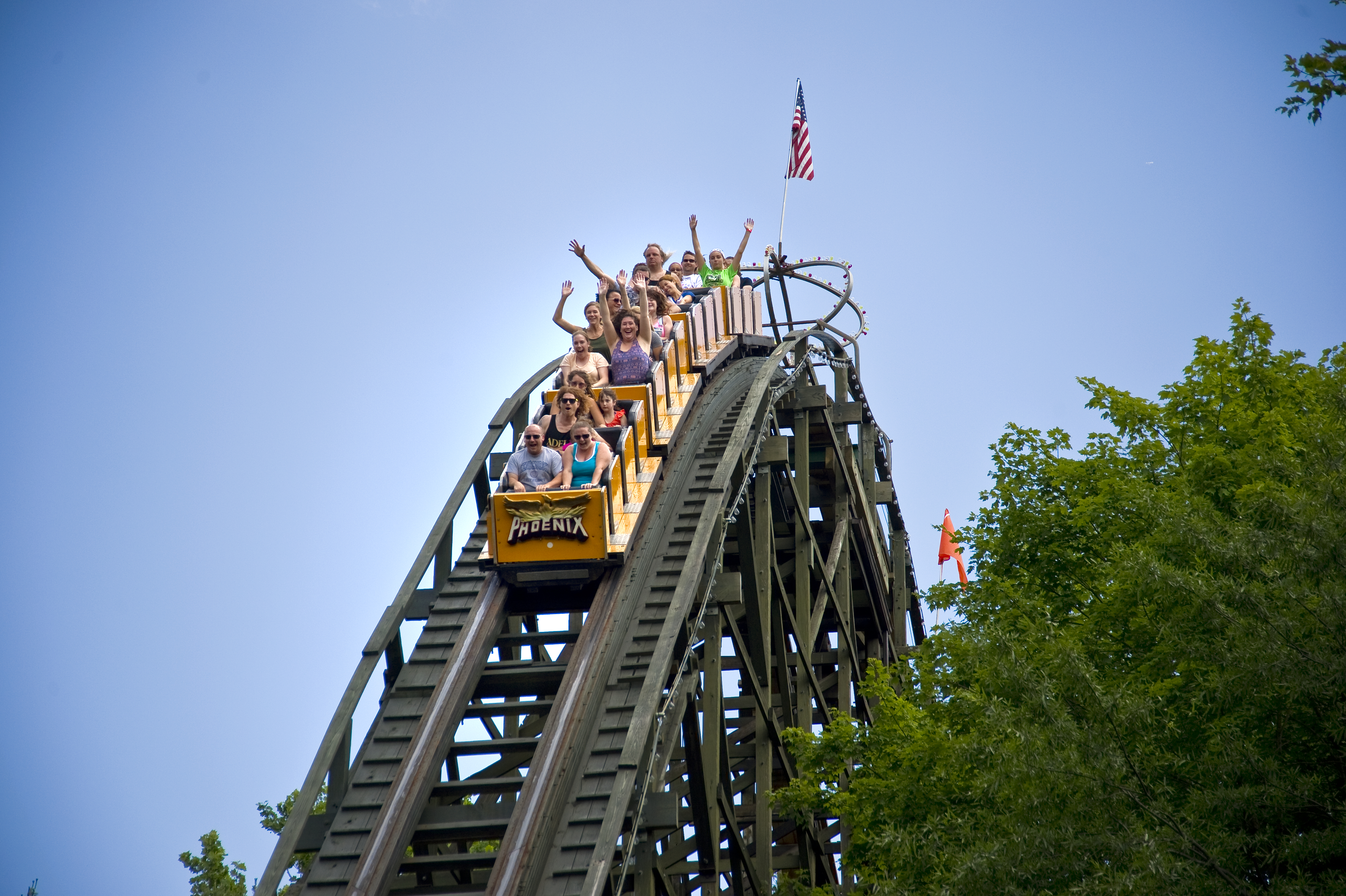 It’s not the tallest, fastest, scariest or newest, but this is a much loved, thrilling, old-school coaster with a storied history. When an amusement park closed in San Antonio, Texas, the 1940s wood coaster was dismantled, moved cross country via almost three dozen tractor trailers and, piece by piece, resurrected as the aptly named Phoenix.

With a top speed of 45 mph, the Phoenix sweeps riders through a long, dark tunnel, also inducing plenty of giddiness on 12 airtime-filled hills, where the lap bar lets riders readily bounce out of their seats.

Named for the hawk-headed ancient Egyptian god of war, this steel, inverted coaster boasting a top speed of 65 mph gives aficionados what they yearn for: a feeling that they’re careening out of control. The close to 4,000-foot-long track is rife with surprises, including high-speed dives, underground trenches, and tight curves, as well as seven inversions.

Among these multiple inversions is the Immelmann, a horseshoe-shaped diving loop that’s ominously named for a World War I German fighter pilot; a pair of 45-degree vertical loops, one that’s 60-feet high; and a Zero-G Roll. With all this dizzying action, it’s no wonder that coaster fans keep coming back for more.

On this double launch coaster — the first in the Carolinas — the shocks start as soon as the train leaves the station with a jojo roll that treats riders to an upside-down twist. Then, in a 2.5-second flash, the train is launched from 0 to 42 mph, propelling it into a 360-degree inversion.

Perhaps the most heart-pounding experience is after the second launch with an 82-foot hang-time loop, the coaster’s highest point. This winding ride boasts five complete gut-flipping inversions, more than any other double launch coaster in North America. Coaster enthusiasts are also wild about the airtime hills aplenty, and the tight, close-to-the-ground twists and turns.

This coaster will cure anyone of the idea that wood coasters are tame. As the world’s fastest wood coaster, Lightning Rod rockets at a top speed of 73 mph. It throttles from 0 to 45 mph, speeding up the 20-story lift hill. This launch is the equivalent of a whopping 1,500 horsepower, making the coaster’s name and 1950s hot rod theme apt.

Riders get impressive views of the surrounding verdant hills and valleys from the lift hill’s twin summits. But there’s little time to relish in the scenery, given the subsequent daring, almost vertical, 16-story dive. With the ride’s astounding 20 seconds of airtime, as well as a four-part element with twists, banks and plunges, serious screaming is warranted. 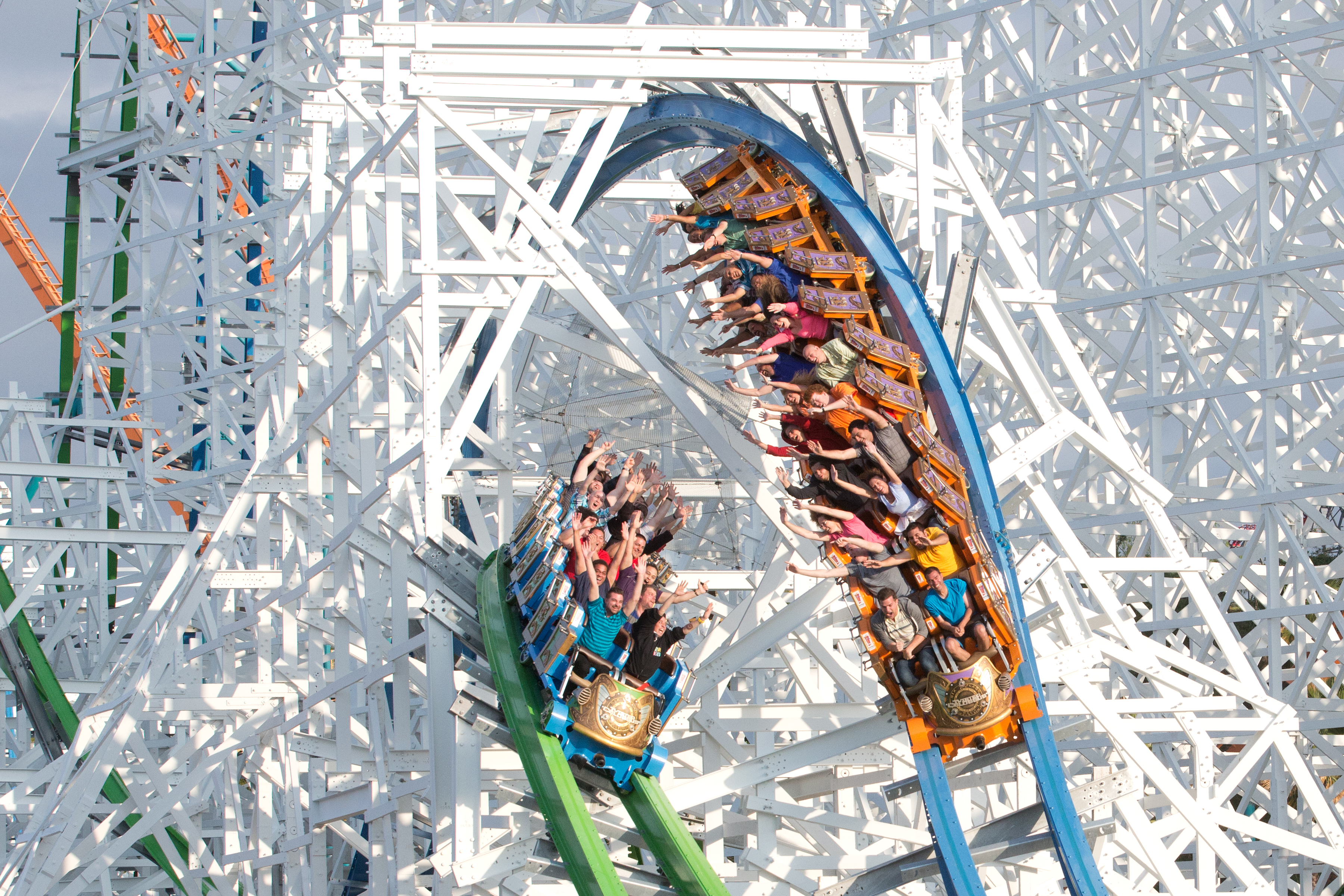 The original wooden Colossus coaster was given a makeover with steel tracks, converting it into this hybrid, one of the world’s longest, with nearly a mile of track.

The four-minute ride gives riders a wild time with rapid rolls and spirals, 18 airtime hills, and steep banked turns. The brief time spent hanging upside down when the train slows in the Top Gun Stall element seems like an eternity. And the Western Hemisphere’s first High Five element gives riders in two trains the illusion that they are high fiving each other when they extend their arms.

Where to Swim With Sharks (Really)