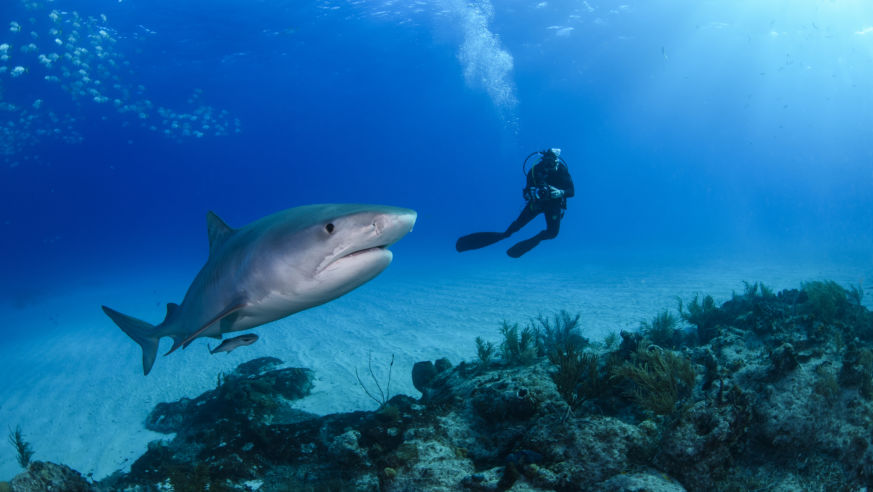 Bragging rights: Yup, you can chill with sharks and live to tell the tale.

Want a little up-close-and-personal time with the world’s most perfect predator?

Sharks are absolutely crucial when it comes to having a healthy ocean environment. Luckily, supporting shark conservation comes in many different forms and you can be a part of it. From shark-tagging with scientists in the Bahamas to swimming with sharks in Hawaii to photographing them in Rhode Island, here’s where to score quality time with these misunderstood creatures.

The gorgeous waters off Great Exuma are home to tiger sharks, nurse sharks and Caribbean reef sharks galore. Thanks to the Bahamas' distinction as a shark sanctuary, the shark population here is protected and healthy. That said, it’s an ideal place to conduct shark research. That’s where Beneath the Waves, a nonprofit-organization focused on shark conservation, and The Grand Isle Resort & Spa, come in. Its shark-tagging program gives people the chance to step into the role of shark scientist for the day.

For four hours you’ll be gathering scientific data from sharks to help scientists understand the shark’s movements and how the sharks are using their habitats. Guests, if they choose, help measure the sharks, take small tissue and fin-clip samples and attach tags and tracking devices to sharks. So far, the team has tagged almost 200 sharks in the Bahamas.

Afterward, relax at Grand Isle with a massage, a dip in the infinity-edge pool or a Bahamian-inspired dinner at 23° North Beach Club. Hotel guests have full access and non-guests may purchase a day pass for $50. If you’re ready to venture out again, the hotel can arrange lunch on a private island or a boat tour through the Exuma Cays for cave snorkeling and a stop at a gorgeous sandbar.

Each year, leopard sharks flock to the photogenic coast of La Jolla, a seaside community in San Diego. What makes it so special? It’s the largest annual aggregation of leopard sharks in the world. Thanks to the calm, shallow water and nutrient-rich kelp forests, it’s an ideal place for hundreds of pregnant female leopard sharks to take up residence; they’re often just a few feet from shore.

Say hello to the sharks while you flipper-kick through four microhabitats in the La Jolla Underwater Park. An hourlong leopard-shark tour with Everyday California is perfect for newbie shark enthusiasts since leopard sharks (typically about 4 feet long) are virtually harmless. Added bonus: Their distinctive markings make for some epic underwater photos. If you’re lucky, you may spot tiny baby leopard sharks.

The Bahamas is also home to Tiger Beach, a consistently sharky spot attracting divers from around the world. Known for their beautiful stripes and broad, flat heads, tiger sharks are the star attraction of this dive spot. You can’t miss ‘em: These mammoths can weigh more than 1,900 pounds. An added bonus: Reef sharks, lemon sharks, hammerheads and nurse sharks love to frequent the area, too.

Because visibility is often 100 feet or more at Tiger Beach, it makes for not only an unforgettable dive but also an insane backdrop for photos. Believe it or not, many of these creatures travel thousands of miles each year and end up back at Tiger Beach consistently.

To score some quality time with the biggest shark in the ocean, the whale shark, visit Cancun. Hundreds of the majestic creatures (some are the length of a school bus) migrate here every year to feed and socialize. You can get close enough to the gentle giants to clearly see the perfectly patterned pale yellow dots and stripes on their skin. Don’t worry, though: Plankton is their snack of choice.

Blue Caribe Tours takes guests (up to 10) on a day trip that gives you two glorious hours swimming with the whale sharks. Afterward, enjoy a pitstop in Punta Norte in Isla Mujeres to snack on fresh ceviche.

Rest your head at TRS Coral Hotel, an adults-only all-inclusive in Cancun. Treat your muscles to a hot and cold hydromassage bath at the spa, relax in the pool in a floating chair or take a ride on the boat channel system. With one private beach club, seven à la carte restaurants, one show-cooking restaurant and 18 bars, it’s impossible to be bored. Be sure to leave time to see the Mayan ruins and a nearby cenote.

New England is home to about 50 species of sharks. The main ones you will come across, though, are the blue shark and the mako shark. Hitting speeds of up to 60 m.p.h., makos are the fastest shark in the ocean. Both travel the Gulf Stream waters here, and it’s one of only a few locations in the world where they can regularly be encountered.

Rhode Island Shark Diving, run by award-winning shark cinematographer Joe Romeiro, offers a 12-hour excursion on a 45-foot research vessel custom-made for interacting with and filming wildlife. Throughout the day sharks will arrive at the boat as you drift over different sites.

About three miles off of Oahu’s North Shore, it’s possible to find Galapagos sharks, sandbar sharks and tiger sharks. For a chance to spend quality time with them, sign up for a 2-hour pelagic shark snorkel with Ocean Ramsey’s One Ocean Diving, and you might meet Captain Pancakes, Frankenfin or Miss Aloha. (The team has affectionately named some of the repeat shark visitors.) When it comes to sharks, Ramsey’s goal is to replace fear with education. Guests join marine biologists on the excursion and learn all about shark conservation and research.

If you are itching to see Scalloped hammerheads, here’s your chance. Four major currents combined with nutrient-dense waters make the Galapagos Islands an incredible home for sharks, especially hammerheads.

Ecoventura’s Galapagos Sky, a live-aboard built specifically for diving in the Galapagos, takes guests on a 7-day cruise to places like the remote Wolf and Darwin Islands, which have the highest abundance of sharks in the world. Here, it’s common to see big schools of hammerheads. Wreck Bay Dive Center, on San Cristobal Island, is a solid choice if you’d like to do a day or two of diving.

Get more travel inspiration, tips and exclusive offers sent straight to your inbox with Lonely Planet’s weekly newsletter. Check out adventure tours for every traveler from our trusted partners.