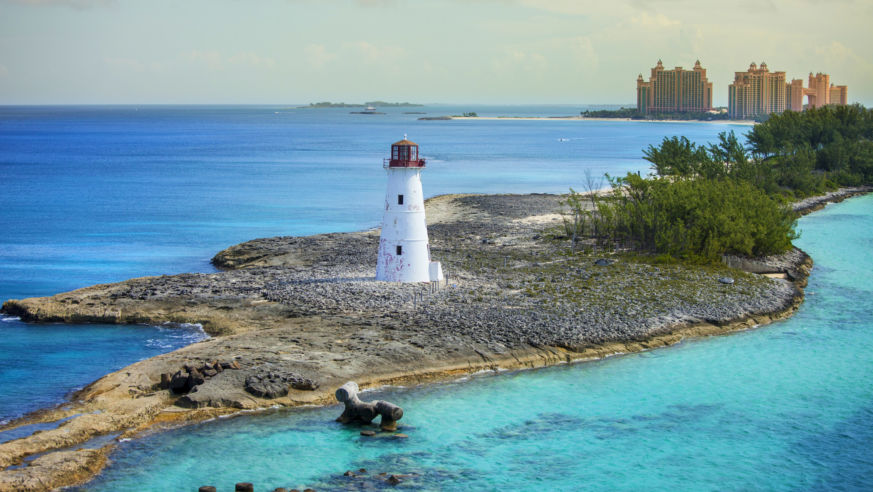 Beaches! Sky juice! Water slides! Conch fritters! Nassau and Paradise Island, Bahamas, are a short hop from anywhere on the East Coast, making the perfect island getaway closer—and more affordable—than ever. All you'll need is a valid passport and your bathing suit!

My hands are shaking and my knees are weak; I'm not in love, I'm climbing the steps of the Atlantis Paradise Island Resort's Mayan Temple, ever so slowly approaching the entrance to Leap of Faith, the largest, steepest water slide I've ever been on. Not only that, this seven-story slide will take me through the Mayan Temple Shark Lagoon—a large aquarium full of Caribbean reef sharks. Gulp.

I've spent most of the morning chatting with people who have just been on the impressive-looking slide, trying really hard to talk myself into it. By the afternoon, I've rationalized everything—the drop, the angle, the speed—and am finally ready to take the plunge. And then I find out there's another, easier way to see the sharks up close: another Mayan Temple attraction called the Serpent Slide that doesn't involve a terrifying drop down a 60-foot tall almost-vertical body slide, but rather a fun ride on an inner tube that ends in a large, clear tunnel, slowly taking you through the shark-filled aquarium.

So, yes, I may have totally chickened out on the big slide, but at least this way I was able to glide past the giant sharks, and believe me, that was terrifying enough!

Don't have enough time to visit all 700+ islands of the Bahamas? Start with New Providence Island, home to Nassau, Paradise Island, and enough beaches and Bahamian culture to satisfy every foodie and history buff in your arsenal. Plus, the U.S. Dollar is on par with the Bahamian Dollar, so you don't have to worry about the exchange rate, and the locals are super-friendly. What's not to love?

Experience all the perks of the Atlantis Resort—for less!

We've all seen photos of the iconic pink towers of the Atlantis Resort's Royal Towers, but did you know there's a way to experience all the perks of the resort without actually ponying up the big bucks to stay there? The secret: stay next door at Comfort Suites Paradise Island(from $130 in early December). Not only will your nightly rate give you complimentary Wi-Fi and daily breakfast, it also includes day passes to Atlantis, which normally run $150 per person, for free. Spend the day taking on the water slides in more than 20 swimming areas and 11 themed pools, lounging on white-sand beaches, or feasting at the one of the resort's fine dining restaurants, then unwind by the pool and bar at Comfort Suites Paradise Island if you need a break from all the excitement. Don't miss the Lazy River Rapids (which feel like they're part lazy river, part wave pool!) and of course, the legendary water slides of the Mayan Temple that let you float or slide through an aquarium tank full of Caribbean reef sharks! Note: It's also worth checking for flash sales on the Atlantis Resort website for extra savings if you really want to stay on the property; rates at the resort's Coral Towers start at $170 per night in early December.

Don't miss the Bites of Nassau Food Tour a three-hour food tasting and cultural walking tour through the colorful streets of Downtown Nassau, with stops at six local restaurants and specialty shops—like an artisanal chocolate tasting at the Graycliff Beer Garden & Chocolatier or a lesson in local Bahamian herbs and spices that will change the way you look at medicine the next time you have a cold (curry spices are used in cooking to treat inflammation and coughs, who knew?). You'll also stop at Van Breugel's Bistro & Bar for Caribbean fusion dishes; Bahamian Cookin' Restaurant & Bar, where the locals go for traditional eats; Athena's Cafe, the island's oldest Greek restaurant; and the Tortuga Rum Cake Company to taste flavored rum cakes that are baked daily with five-year aged rum (from $69 per adult, $49 for children ages 12 and under, children under 3 are free). For a fun, super-authentic dining experience, check out the Fish Fry at Arawak Cay, a collection of small, local restaurants just outside Downtown Nassau where you can sample Bahamian favorites like cracked conch (pronounced "conk" by the way) and Sky Juice, a milky-white concoction made with gin, coconut water, sweet milk, cinnamon, sugar, and fresh nutmeg. A number of locals I spoke to recommended Oh Andros as their favorite spot for food in Arawak Cay and Twin Brothers for the best daiquiri cocktails. I concur.

Visit Fort Charlotte, The Queen's Staircase, and a Pirate Museum!

History buffs will love exploring Nassau's old forts, originally built to protect the island from invaders, but luckily, none has ever had to be used in battle. Fort Charlotte is about a five-minute walk from Downtown Nassau and features displays of how the complex was built and what it was like to be stationed there in the 17th century (spoiler alert: it wasn't easy!) Admission is $5 for adults, $3 for seniors, $2 for children ages 6-12, ages five and under get in free. Closer to Downtown, Fort Fincastle sits at the top of Bennet's Hill overlooking the city. To reach it, climb the Queen's Staircase, a 102-foot tall staircase built by slaves in the late-1700s and later named in honor of Queen Victoria, who is credited with abolishing slavery in 1837—or do what I did and take a taxi to Fort Fincastle and make your way down the Queen's Staircase instead (admission is free for both sites). Pirate lovers will want to visit the Pirates of Nassau Museum, home to an interactive pirate attraction that feels like you've become part of the Pirates of the Caribbean ride—keep an eye out for the pirate ship Revenge and get your close up of Blackbeard himself ($13 for adults, $6.50 for children ages 4-17).

Brush up on your negotiating skills and pick up some locally-made handicrafts from the Straw Market on Bay Street in Downtown Nassau, a great place to find hand-woven straw bags, hats, and other Bahamian crafts and souvenirs for your friends back home. Smaller straw markets are also located on Paradise Island and in the Cable Beach resort area about a 20-minute drive from Nassau.

If you plan on renting a car to discover the rest of New Providence Island, keep in mind that everyone drives on the left in the Bahamas, so proceed with caution, especially if you're not used to it. I opted for taxis, a great option if you're traveling with a group, or an easy 10-minute water taxi ride to get between Paradise Island and Downtown Nassau ($4 one way, $8 round-trip, every half hour). Another option, especially if you're staying along Cable Beach or areas west, is to hop a ride on the jitneys into and out of Downtown Nassau, a great way to chat with locals who are doing the same thing (each ride is about $1.50). For a nice, quiet stay in Paradise Island, head east and try the Best Western Plus Bay View Suites for a relaxing romantic getaway. It's a five-minute walk to the nearest beach, and also a great option for large or multi-generational families traveling together who might need more space (from $160 per night).

Tucked away on the eastern end of Paradise Island about a 15-minute walk from the Atlantis Resort area, you'll find Versailles Gardens, a lovely, terraced, European-style garden modeled after its namesake in France. The Versailles Gardens are located on part of the One & Only Ocean Club's property along Paradise Island Drive, but are free and open to the public 24/7, and as you can imagine, a popular spot for photos and weddings. You'll also find the remains of an original 14th-century French Cloister across the street that's part of the complex, purchased by William Randolph Hearst and later by Huntington Hartford, who brought it with him to the Bahamas.

The best part: it's closer than you think