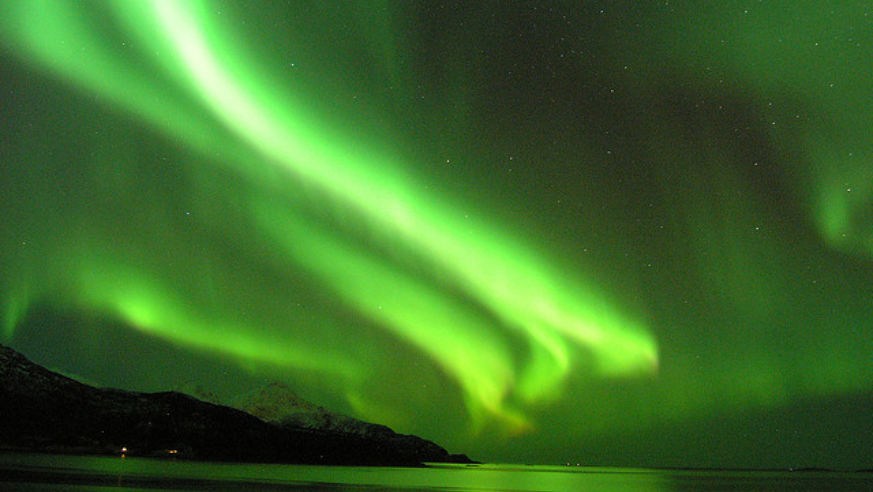 The Northern Lights, as seen from Norway.

This article was written by Zoë Smith on behalf of Viator.com's Travel Blog.

One of the world’s most dazzling natural phenomenons, few vistas can top the Northern Lights, officially known as the Aurora Borealis (signifying the meeting of Aurora, Roman goddess of the dawn, and Borealis, the Greek North Wind). Created by solar winds interacting with charged particles in the earth’s magnetic field, the Lights appear as otherworldly streaks of green, red, yellow, and purple light dancing across the arctic skies. Visible throughout the so-called ‘Northern Lights Oval,' countries lying in the far-northern latitudes, optimally between 10 and 20 degrees from the magnetic North Pole, are most likely to catch a glimpse of the spectacle, which occurs predominantly between late-September and late-March, often close to midnight. While travelers flock to the world’s northernmost countries for a glimpse of the Northern Lights, seeing them is no exact science and there’s no guarantee that you’ll get a good look. From the snow-enveloped wilderness of Siberia to the northernmost tip of Canada, here are some of the best places to see the Northern Lights. So wrap up warm, pick a crisp, clear night, and cross your fingers.

Iceland
With its stark beauty, starry skylines and magnificent frosted landscapes, Iceland’s unique backdrop makes it a favorite place for photographers to capture the Lights. Auroral activity is greatest during the mid-winter months and the lights are visible from locations all over the country (on clear nights, you might even catch a few glimmers in Reykjavik). Two of the most popular watching areas are the ‘Golden Circle’—encompassing the Thingvellir National Park and the Haukadalur geothermic valley—and the Snaefellsnes Peninsula, home to the famous Snaefellsjokull glacier, both easy trips from Reykjavik. For some of the clearest views and viewpoints away from the crowds, head to the northern coast on the brink of the Arctic Circle—the volcanic Reykjanes Peninsula and the northern city of Akureyri are both great choices.

Browse Northern Lights Tours from Reykjavik and read more about Things to Do in Iceland in Winter.

Alaska
In the far north of the United States, Alaska’s vast snowy wilderness casts an eerie shadow beneath the glow of the Northern Lights and the further you venture out of the cities, the brighter the lights seem to shine. Fairbanks, Denali, and the Yukon Territory are all popular locations for watching the lights (the Fairbanks Visitors Bureau claims an 80 percent chance of seeing them if you stay there for three nights), or else, you can hire a knowledgeable guide and just head north. Alaska also offers some of the most unique ways to see the lights, meaning that you’re guaranteed a memorable experience with or without the lightshow. Take an arctic cruise from Fairbanks, Anchorage, or Ketchikan and view the lights from the water; go ‘flightseeing’ for a chance to get up close to the lights by flying over the Arctic circle; take an overnight train over the snow covered Alaska Range; or stave off the frostbite by soaking in the Chena Hot Springs while you wait.

Read more about When to Visit Alaska.

Lapland
Those looking for a dose of wintertime magic will find plenty to fuel their imagination in Lapland, Finland’s northernmost region and Santa Claus’ official European base. Along with visiting the home of Mr. Claus and whizzing over the snow on a husky-driven sled, viewing the Northern Lights is a right of passage for visitors to Lapland. In Finland the lights are known as Revontulet, meaning ‘Fox fire’, named after the local fairytale featuring a fox whose swishing tail sent sparks flying across the North sky. Northern Lights tours are everywhere in Lapland with in-season viewings occurring on an average of two out of three nights, and there are a plethora of viewing options. Take a reindeer safari, climb to popular lookout points on a snowmobile, stay overnight in an igloo or visit the world’s first Northern Lights Observatory atop the 904-meter Haldde Mountain.

Russia
The Northern Lights still hold special significance for the Russian Saami tribes, who gather to watch the lights from the shores of the vast Lake Lovozero and read their fortunes in the colored streaks. Perhaps one of the lesser-visited Northern Lights regions, Russia is the go-to place if you want the wilderness to yourself, with a mammoth stretch of the country lying close to the Arctic Circle and almost all of the northern regions offering great views. The Kola Peninsula, snaking towards Scandinavia in Northwestern Russia, is one of the principal Lights-watching areas thanks to its prime location on the Northern Lights’ belt and a number of guided excursions run from the Arctic city of Murmansk. Get there in December or January and you’ll be gifted with pitch-black days and nights, as the sun disappears from view for around six weeks. Alternatively, Severodvinsk is renowned for having some of the brightest lights in Russia, with red and green glows even visible from inside the city and Salekhard is the world’s only city located on the Arctic Circle putting it firmly inside the superior viewing zone.

Denmark
The most southern country in Scandinavia might be a bit far away from the Arctic Circle, but there are still opportunities to see the Lights on Danish shores. Greenland’s Inuit population have been enjoying some of the clearest views of the Northern Lights for centuries, believing that the eerie illuminations are the lost souls of the dead, and today the territory retains one of the highest hit rates of Aurora sightings. Head to the popular town of Kangerlussuaq or take a cruise along the sparsely populated East coast, with a backdrop of towering icebergs. Alternatively, Denmark’s Faroe Islands, a remote archipelago stranded halfway between Iceland and Norway, are likely one of the most unique locations to experience the Lights, with regular flights from Copenhagen.

Sweden
Each Scandinavian country has its own stake in Northern Lights tourism, but Sweden boasts its own unique claim to fame. Jukkasjarvi was home to the world’s first ice hotel and bar, fashioned entirely out of the cold stuff, inspiring dozens of imitations around the globe, and remaining one of the most atmospheric places to base your Northern Lights excursion. Abisko National Park is another one of Sweden’s highlights, where you can head to Torneträsk Lake, renowned for its unique micro-climate which affords weatherproof clear skies or visit the legendary Aurora Sky Station where you can take a chair-lift up to the summit, explore the special Northern Lights Exhibition and watch the night sky from the open-air observation deck. There are plenty of other prime spots, too—the Tornedalen region, the UNESCO World Heritage site of Laponia and the far northern town of Luleå are all popular choices. Time your visit for the darkest part of the year, between November and February, and if you’re lucky enough to catch the sky ablaze, make sure you keep quiet—local Sámi mythology dictates that it’s bad luck to make a noise during the Aurora Borealis.

Norway
With its wild landscapes blanketed with snow and ice-capped fjords glistening beneath the stars, Norway offers one of the most otherworldly backdrops for watching the Northern Lights. With the northern half of the country stretching into the Arctic Circle and more viewing locations than anywhere in Scandinavia, Norway has some of the brightest and most frequent sightings in the world. The Lofoten islands, Alta, Svalbard, and Finnmark all have high rates of Lights spottings, but Tromsø remains one of the most popular destinations, so much so that Hurtigruten ships even run Northern Lights cruises along the rugged Norwegian coastline. And there’s plenty to pass the time while you’re waiting for the midnight lightshow—Norway is one of Europe’s premier winter sports destinations, with skiing, snowshoeing, dog-sledding and snowmobiling all popular ways to enjoy the snow.

Canada
With the north of the country lying within the North Magnetic Pole and the western Yukon Territory crowned as one of the world’s best viewing spots, there are plenty of good reasons to take your Aurora quest to Canada. Make the most of snow while you’re there, by learning the popular local sport of dog mushing (riding husky-driven sleds) and exploring some of the most stunning winter landscapes in the Northern Hemisphere. Eastern Newfoundland and Labrador offer plenty of opportunities to see the Lights, as well as being snowmobiling hotspots home to over 1,500km of trails; or spot two winter wonders in one trip, with a visit to Manitoba, on the cusp of the Aurora Oval and a popular place to witness polar bears in their natural habitat. For a real adventure though, take a boat or plane to Iqaluit, a natural paradise tucked away on Baffin Island, where you’ll be in the heart of the Arctic and far away from the lights of the city.

Book a 3-Day Northern Lights Tour in Whitehorse from Vancouver.