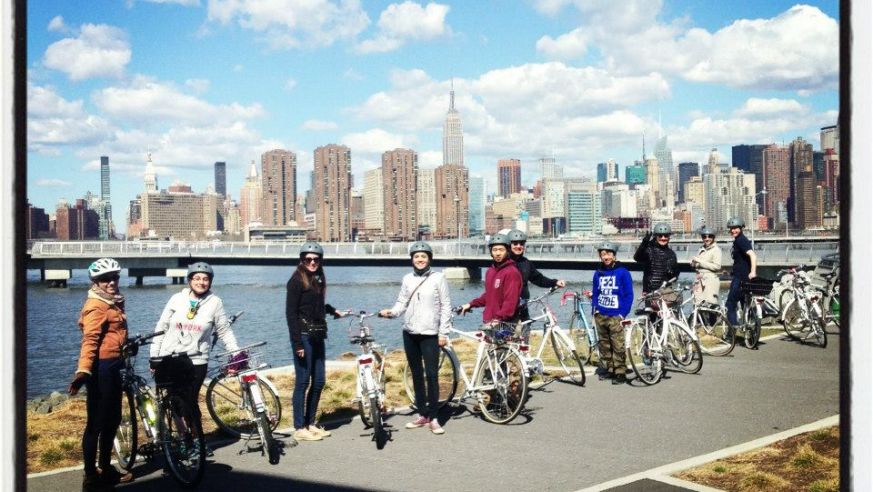 Our group stops for a photo-op with the New York City skyline at WNYC Transmitter Park in Greenpoint.

I'm a Queens girl, originally from Floral Park and currently living in Bayside. For me, Brooklyn has always been this artsy far-away place that sounds great, but is practically a day-trip from where I am. Needless to say, I haven't been out there much, but have always wanted to see what everybody's been talking about. Then I stumbled upon Get Up And Ride, a leisurely bike tour through six different historic Brooklyn neighborhoods along the East River led by Felipe Lavalle, a friendly Brooklynite entrepreneur who started the company last June as a way to combine his passion for cycling with his love of the neighborhood.

The Classic Bike Tour of Brooklyn is available from 11 a.m. to 3:30 p.m. Tuesdays, Thursdays, and Saturdays. Tours meet on North 12th St. between Bedford Ave. and Berry St. in Williamsburg across from the King & Grove Hotel, just a short hop on the L train from Union Square in Manhattan. After a quick check of the bikes, helmets and CV radio headsets were distributed so we could hear Felipe's commentary about the neighborhoods we passed through. It had been a pretty long time since I'd ridden a bike, so the idea of riding in traffic was a little intimidating at first, but I quickly got the hang of it, especially with Felipe announcing where to go and when to cross as we worked our way around town. We pedaled through old factory rows and past a thriving Polish community in Greenpoint, stopped for a slice at Best Pizza in Williamsburg, and biked on the "Great Hipster Silk Route" on our way to the Brooklyn Navy Yard for a behind-the-scenes look at Brooklyn Grange, an urban organic rooftop farm paving the way for fresh veggie growing in big cities. We stopped at WNYC Transmitter Park, Brooklyn Bridge Park, and along the Brooklyn Promenade for photo-ops with different angles of the New York City skyline. Another perk was stopping at the Brooklyn Roasting Company, a local coffee shop in DUMBO known for their delicious freshly-brewed coffee, espresso, and cortado, a drink guaranteed to restore your energy. We ended the 4.5 hour tour with a scenic ride on the East River Ferry, passing underneath the Brooklyn Bridge on our way back to the tour's starting point in Williamsburg.

The tour costs $85 per person and includes a 4.5 hour guided ride through Greenpoint, Williamsburg, Wallabout (the Brooklyn Navy Yard area), Downtown Brooklyn, Brooklyn Heights, and DUMBO; bike rental, bike lock, and helmet; a CV radio headset so you can hear about the neighborhoods as you ride; a behind-the-scenes look at Brooklyn Grange in the otherwise off-limits Brooklyn Navy Yard; and a scenic ride on the East River Ferry from Brooklyn Bridge Park back to Williamsburg. Shorter 2.5 hour themed tours (ie. photography, foodie, and graffiti tours) as well as a shorter tour of Greenpoint and Williamsburg will soon be available for about $50 per person, so check the websitefor the latest updates. Be sure to pack a water bottle or two, wear sunscreen, and dress comfortably according to the day's weather forecast—most importantly, don't forget to bring your camera!