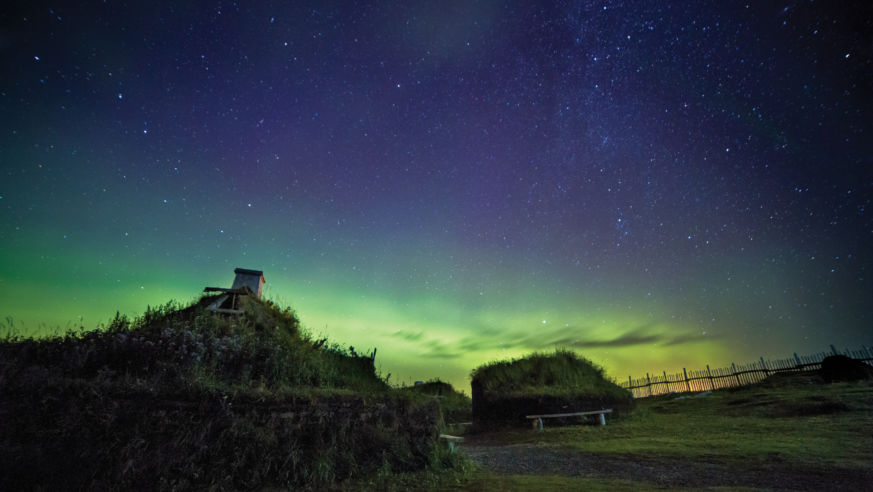 With vast expanses of sky untainted by artificial light, many parts of Canada offer stellar opportunities for stargazing. The Royal Astronomical Society of Canada (rasc.ca) has recognized nearly two dozen locations as Dark-Sky Preserves—and this year is the 50th anniversary of the July 1969 moon landing, so it’s as fitting a time as any to look up and contemplate the cosmos.

As if warm summer nights aren’t reason enough to indulge in an extended gazing session, meteor showers provide even more incentive to head outside. The Perseids are an annual favorite, and this year's celestial show runs July 17 through August 26, peaking August 12 and 13. Check out these eight destinations for unbeatable views of the night sky. 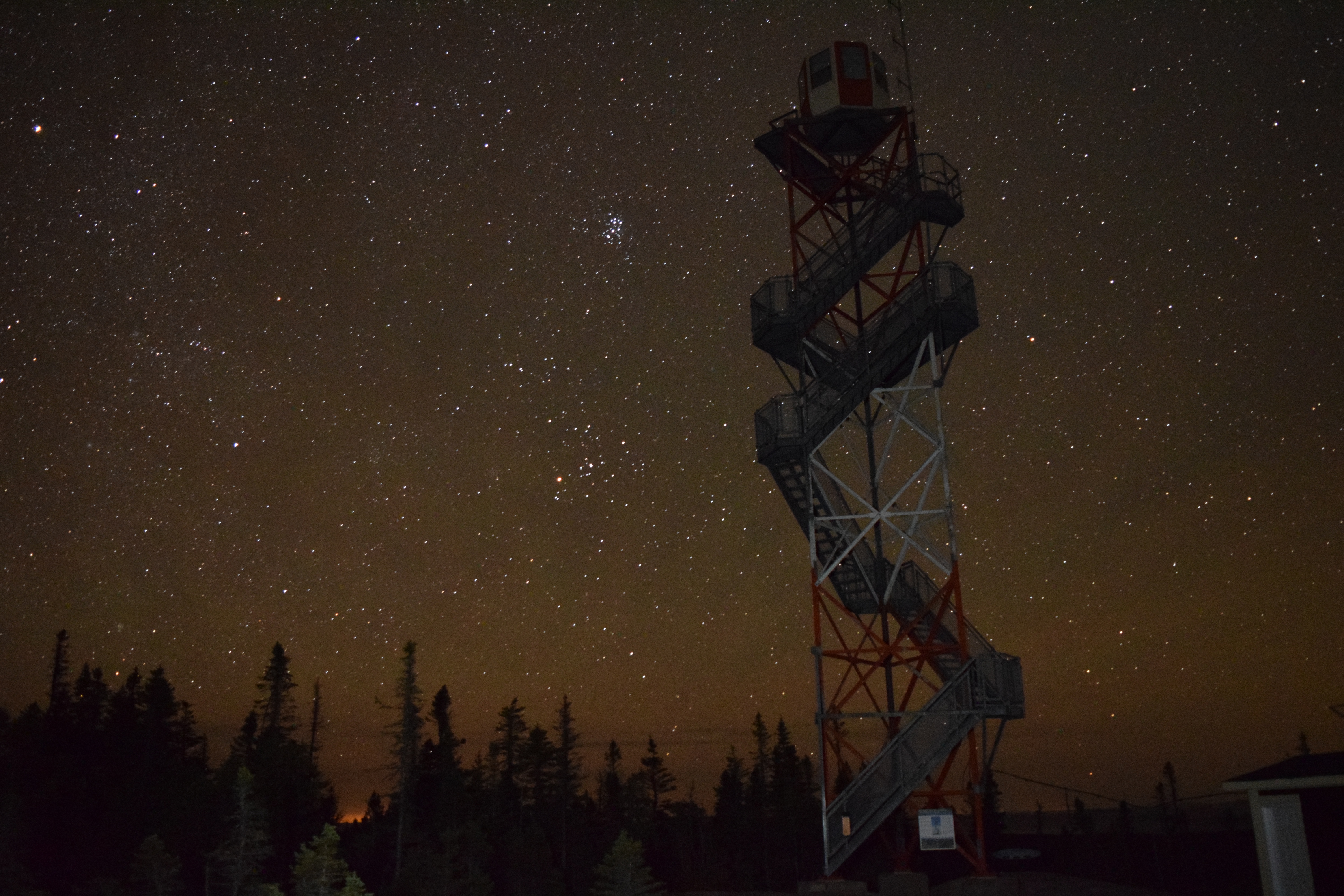 One of Canada’s newly established Dark-Sky Preserves—just designated in 2018—Terra Nova National Park offers plenty to do from sunup to sundown. By day, wander the park’s trails, take a two-mile stroll around the pond, sign up for a guided hike, or take a dunk in Sandy Pond. Kids will love the visitor center, where they can check out the touch tank and get up close and personal with creatures of the sea. When the sun sets, find a good place to gawk at the constellations. Pack a flashlight and take a hike to Ochre Hill, a fantastic vantage point that was once a fire-watch station. Sandy Point is the darkest place in the park, known for the best views of the night sky.

“Power Down. Look Up” is the tagline for Jasper’s annual Dark Sky Festival in October (jasperdarksky.travel), when stargazers can attend photography workshops and talks during the day and gaze into the cosmos at night, with special events such as star sessions atop the Jasper SkyTram. But even if you don’t visit during the festival, there’s plenty to do here: While the sun is out, hike the trails, look for wildlife, or enjoy the region's culinary delights on a Jasper Food Tour (jasperfoodtours.com). Then, turn your attention to the stars at one of this Dark Sky Preserve's scenic spots, like Medicine Lake, Pyramid Lake, Lake Annette, Maligne Canyon, and more.

Known for its rugged scenery and mountain culture, Banff is paradise for outdoorsy types. Spend the days hiking, biking, and paddle-boarding in Banff National Park, keeping an eye out for some of the park's famous wildlife, including, but not limited to, grizzly bears and bighorn sheep. Lake Minnewanka and Two Jack Lake provide scuba-diving opportunities, and the town of Banff itself has an array of shopping and spa possibilities. Lake Louise and Moraine Lake are short scenic getaways, with Lake Louise around 34 miles away, and Moraine Lake about 12 miles further. Hike, paddle-board, or simply soak in the vistas, and at night, sit back and watch the Milky Way’s virtuoso performance.

Active travelers will delight in this national park's bounty of outdoor pursuits, from hikes through the Tablelands and scenic boat tours of the freshwater-glacier-carved fjords to whale-watching excursions through Iceberg Alley to the north. Set out to Trout River's Eastern Point Trail for gorgeous clifftop views or explore L'Anse aux Meadows, the 1,000-year-old UNESCO World Heritage site where Vikings once lived, then treat yourself to a traditional Jiggs dinner, a classic boiled or Sunday dinner served in some area restaurants, or take the Taste of Gros Morne food tour (tasteofgosmoren.com) to sample the local cuisine before the night's activities.

It may be the country’s darkest preserve, but explore Grasslands National Park by day and you could spot black-footed ferrets, golden eagles, short-horned lizards, and black-tailed prairie dogs, to say nothing of the plains bison, a near-threatened species that was reintroduced in 2005. Soak in the views of badlands and grasslands by car on a cruise along the seasonal Badlands Parkway, or take the Ecotour scenic drive to learn about the heritage and history of the area. Go for a hike, embark on a rugged overnight backpacking adventure, or get in some exercise canoeing, kayaking, or cycling. When you need a rest, be on the lookout for the six “red chair” locations throughout the park. Each of these oversize Adirondack chairs provides a spectacular perch where you can savor the parks' tranquility. When the day’s activities are done, just train your eyes to the sky.

You’d be hard-pressed to find a better destination for stargazing than Wood Buffalo National Park: Clocking in at more than 17,200 square miles, it's Canada's largest national park and the largest Dark Sky Preserve on earth. Each August, the park celebrates its designation with a Dark Sky Festival featuring workshops, guest speakers, and events. The cold, clear winter months frequently deliver spectacular views of the aurora borealis, while fall offers a slightly warmer peek at the Northern Lights. Back on the ground, there's abundant fishing, boating, canoeing, and hiking throughout the park, from the short, easy Karstland loop to rigorous and challenging backcountry routes.

Looking up is always a good idea in Point Pelee National Park, dubbed a Wetland of International Significance by UNESCO in 1987. Birdwatchers, take note: Some 390 avian species have been spotted here, and spring and fall are the best times to catch a glimpse of the migratory creatures as they travel through the area. Wander along the Centennial Bike and Hike Trail, or hop in a canoe or kayak to paddle among the freshwater marshes that make up two-thirds of the park. At night, of course, you won't want to look anywhere but the sky. The park is open until midnight on certain new moon nights, giving visitors ample time to take in the celestial show.

Hugging the Canadian border north of Montana, Waterton Lakes National Park and Glacier National Park comprise the first trans-boundary International Dark Sky Park. While you're waiting for nightfall, grab a fishing license and spend some time by the water, or explore the area on foot or by bike. After sunset, lean back and gaze at the stars from locations like Cameron Bay, which is walkable from town, and the Bison Paddock Overlook, where a short walk will bring you to a promontory facing the valley. (Pro tip: Bring your flashlight. Also, be aware that the 2017 Kenow Wildfire affected a large area of the park, so plan ahead and check for closures before you come.)