14 Scary Places You Should Definitely Visit

Jeffrey Kreulen/Dreamstime
Scared of heights? Waves? Bears? Sharks? Supervolcanoes? We are too. But that hasn’t stopped us from traveling to these beautiful destinations across the U.S.

Don't get us wrong: You should most definitely visit each and every one of these one-of-a-kind vacation spots. After all, they include some of America's most beautiful national parks, beaches, and mountains. But be aware that your risk of being bitten by a shark, swept out to sea, mauled by a bear, or blown off a winding ridge trail are just a little bit greater here than it is back home.

Canyonlands is in the incredibly beautiful but treacherous area where Aron Ralston famously amputated his own right arm when it got pinned under a boulder. Ralston, the subject of the James Franco film 127 Hours, had the right idea: Searches and rescues in this remote desert region—where visitors routinely fall off ledges or are overcome by heat and dehydration—can take days.

On the Big Island, Hawaii Volcanoes National Park is home to Kilauea, which still spews hot ash and lava into the sea. Follow the advice of rangers and signage and you’ll get a scary-but-safe peek at this hothead in action.

This coastal community has more recorded shark attacks than anywhere else on earth. Yep. Sounds crazy, no? But this stretch of beach is shark central. The good news: If you do get bitten here, it almost certainly won’t be fatal—no previous shark attack here has ever killed a swimmer.

In the beautiful Elk Mountains, the Maroon Bells have earned the nickname the “deadly bells,” but even expert climbers are slow to perceive the danger here. Deceptively easy climbing can lead people into tight spots and weak rocks that break away unexpectedly.

Listen up: If you keep your distance from the grizzlies, you’ll be fine. But Denali National Park is crawling with massive bears and you’ve got to keep your food packed up, never hike alone, and stay away from the mama bears and cubs. A fatal mauling in recent years got lots of press because the victim photographed the bear that attacked him. Don’t do that.

Yosemite offers some super-safe tour experiences and also some super-risky adventures. Iconic Half Dome is a popular, and relatively easy, climb—but unfortunately that has led to crowding, carelessness, and visitors falling to their deaths.

Like Yosemite and other popular climbing destinations, it’s perfectly safe to visit Rocky Mountain National Park, but those who venture up Long’s Peak—with its narrow paths, rock slides, and risk of lightning strikes—risk becoming the annual visitor (on average) who does not descend alive.

Kalalau, on Kauai in Hawaii, poses multiple dangers, including narrow paths at dizzying heights and beaches so treacherous that more than 100 people have drowned here to date.

Even if you don’t get lost like the Brady kids or swept off a whitewater rafting excursion, the spectacular Grand Canyon’s Bright Angel Trail may lure you in. It appears deceptively easy, but temperatures climb to 110 degrees and getting back can be tricky for those who don’t pace themselves and carry water.

Mount Washington is a surprisingly hideous experience for those who don shorts and a T-shirt for a quiet stroll. The highest wind speed ever recorded on earth was here: 231 miles per hour. Temperatures at the summit have never been warmer than 72 degrees, and you run risk like getting blown off the ridges, hypothermia, and, yikes, avalanches.

Hanakapiai, on Kauai’s Napali Coast, Hawaii, is a gorgeous beach that’s not only famous for lovely photographs of the breakers but also for pix of a hand-carved wooden sign that reads: DO NOT GO NEAR THE WATER. UNSEEN CURRENTS HAVE KILLED VISITORS.

Oahu boasts some of the most beautiful beaches in the world—and it's a safe and beautiful place to visit! But Oahu's scenic waves and rocks make some beaches treacherous places to take a dip. Stick to lifeguarded, well-populated areas (Waikiki is the most obvious, and popular).

Mount Rainier is home to an active volcano that last erupted only a little over a century ago. The park poses risks of mud flows and “glacial outburst floods,” which can damage roads, campgrounds, and, um, hikers. As with any national park, arm yourself with ranger know-how and obey the signage and you should be fine.

Don’t worry: If the “supervolcano” under Yellowstone blows its top, the disturbance to hiking trails, campgrounds, and roads may seem minor compared with the fact that the eruptions could cover most of the United States in thick ash. Scientists peg the risk at about 1 in 10,000. We don’t mind those odds. 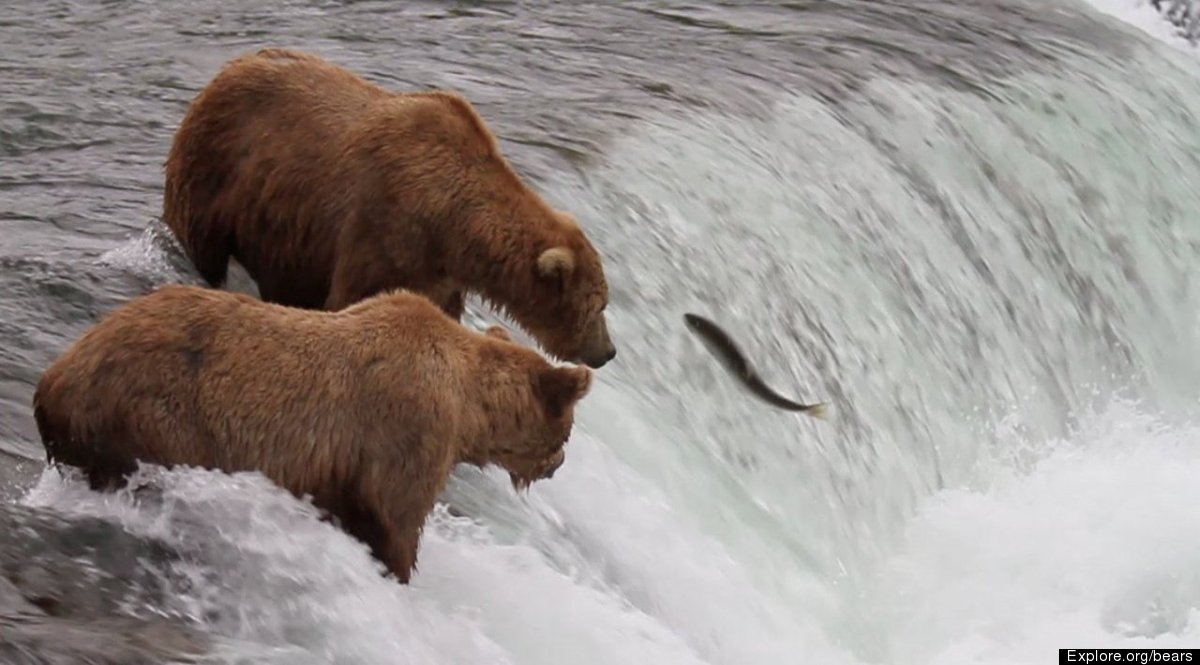 Want to escape to Alaska without leaving home? We've been having a blast checking out the live BearCam at Brooks Falls in Katmai National Park, Alaska. THE COOLEST WEBCAM IN THE NPS? Each fall, Katmai's live web camera sends streaming video of Alaska brown bears (gigantic relatives of the grizzly) as they visit Brooks Falls to catch salmon. An ever-growing body of fans are apparently as ravenous for up-close views of the bears as the bears themselves are for the fresh fish they catch at the falls. OTHER GREAT NPS WEBCAMS We heartily recommend that you check out the BearCam at Explore.org, but we also want to pass on some links to webcams at other national parks that we've come to love. More than any reading material, the images available from these national parks may make you want to fill a backpack and hit the trails. Here's a starter kit for anyone interested in diving into as many parks in the shortest possible amount of time.Glacier National Park provides views of Apgar Lookout, an overview from Apgar Mountain of the North Fork area of the park; Apgar Village, with its visitor center, shops, and restaurants; and Lake McDonald, allowing you to stand at the pebbled shore and look out at the park's highest peaks, which are sometimes reflected in the lake and sometimes shrouded in clouds. (nps.gov/glac)Yellowstone National Park links to a collection of webcams offering a view of Old Faithful Geyser from the spectacular visitor education center, which opened in 2010; a view of the Upper Geyser Basin, including the geyser itself; and Mount Washburn, a view that is used to track fires (this camera is typically turned to a default view at the end of fire season). (nps.gov/yell)Yosemite National Park provides images of a number of the park's most popular sites, including Yosemite Falls, which is actually a combination of three falls (Upper Yosemite Fall, Middle Cascades, and Lower Yosemite Fall); Half Dome, including a view of the Yosemite Valley from nearby Yosemite Village; and Half Dome from 8,000 feet, taking in the High Sierra as well. (nps.gov/yose)Grand Canyon National Park links to just one webcam of the park, which is currently undergoing maintenance, but it's worth checking back for the amazing view when the camera is back online. The camera is meant to provide weather and air quality information, but also serves to whet the appetite of future visitors and to remind former visitors of what makes this place like no other on earth. In addition, the site provides links to live webcams of the San Francisco Peaks and other vistas in nearby Flagstaff, Arizona. (nps.gov/grca)Great Smoky Mountains National Park provides images of iconic spots in this popular park, including a view from Purchase Knob to the northeast; and Look Rock, at the western edge of the park. (nps.gov/grsm) 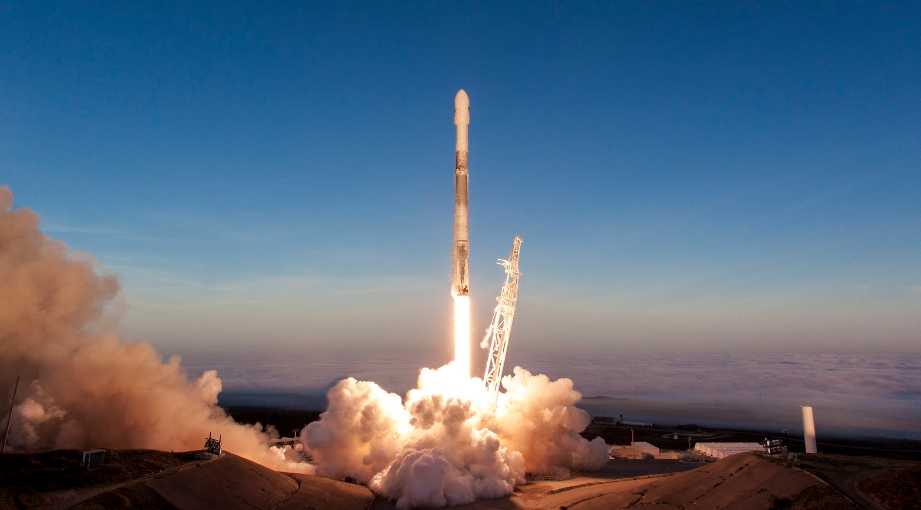 How to See a Rocket Launch in Cape Canaveral, FL

There’s a lot of excitement these days about the next frontier - space travel. So far, in 2018, SpaceX launched a car into space with it’s Falcon Heavy rocket - the powerful and reusable rocket that will take us to Mars. The James Webb Space telescope is the long-awaited follow-up to Hubble that will allow us to see the beginning of time itself will launch from French Guiana in 2019. Soon, the first commercial flights to space will launch, giving anyone the chance to be an astronaut (if you have a lot of money to spend, that is). We don’t have any budget tips for taking a spaceflight (yet), but here’s how you can see a rocket launch without breaking the bank. CAPE CANAVERAL, FL The area around Cape Canaveral, known more broadly as the “Space Coast” (how cool is that!) has seen a boom in activity thanks to the increase in space activity, so the area around is worth planning a mini-vacation for. Notably, the beaches are some of the most pristine beaches in the country. In fact, the Space Coast offers such a unique experience that it was named to Lonely Planet’s Best in US list for 2018. Orlando is only about a 45-minute drive west, and the Spanish colonial town of St. Augustine, Fla., is only about two hours north. Reasonable flights into Orlando can be found roundtrip from most major airports. Hotel rooms can be found nearby for under $100/night. You’ll need to rent a car, which you can do for as little as $23 out of the Orlando airport. PICK A THREE-DAY LAUNCH WINDOW There are frequent launches from Cape Canaveral through the summer seasons. You can find the schedule for space-flights around the world is published at spaceflightnow.com. If you choose to go for the launch of a Falcon 9 or Falcon Heavy, then you’ll also get to witness the landing of these reusable rockets. Keep in mind that rocket launches are highly dependent on weather, so there is a possibility that the launch you want to see has to be rescheduled. Plan to be around Cape Canaveral, Fla., for at least two days—the scheduled day and the day after. (We suggest you arrive a day ahead of the launch date so that you can take a tour and snap photos up close of the rocket on the launch pad.) WATCHING THE LAUNCH Rocket launches are open to public viewing, so there are many ways to watch launches without paying admission, even from a nearby beach! You can find a list of launch locations at the Space Coast information page. Listen for launch details on the radio on AM stations 1240 and 1350, and plan to deal with a lot of car traffic on launch days. You don’t want to pick the wrong place and be downwind of the smoke! The Kennedy Space Center offers several options for viewing shuttle launches, and tickets can be purchased at kennedyspacecenter.com or by phone at 321/449-4444 about six weeks before a launch. Launch viewing is included in the price of a ticket to the Center, but upgrades for better visibility can be added for an additional $20-$49. The Kennedy Space Center is also an interactive museum, great for families and space nerds alike. Daily admission is $50 for adults 12+ and $40 for children under 12. The price of admission includes access all of the Center’s exhibits like “Journey to Mars: Explorers Wanted,” as well as entry to the IMAX theater to see incredible space documentaries play out on huge screens.   A WORD OF CAUTION If your launch is rescheduled up to the day before, your tickets will be valid for the rescheduled launch date. But if you enter the Center and the launch is rescheduled to another date, your launch viewing tickets are considered “used” and you'll have to buy a new ticket for the new launch date. And if a launch is canceled (or "scrubbed," in NASA lingo), you don't get a refund.

Travel 101: The Best of Florida