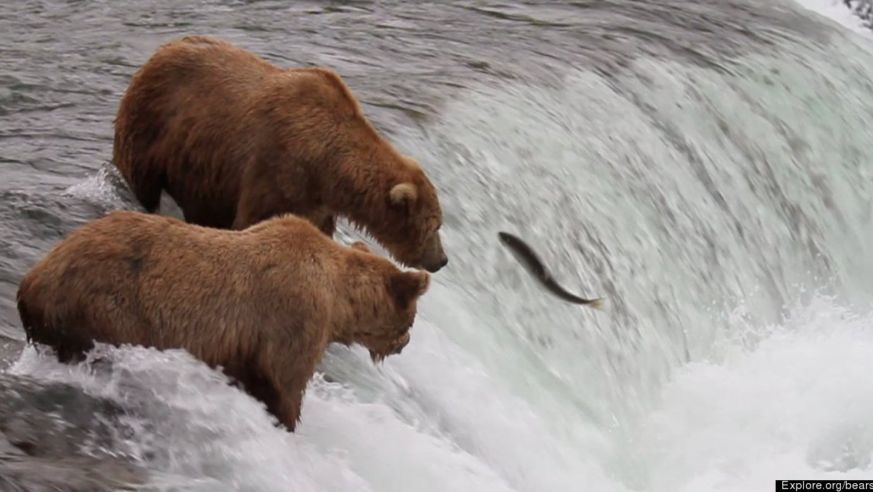 Find out why more and more armchair travelers are hooked on these live videos of Alaska brown bears in the wild!

Want to escape to Alaska without leaving home? We've been having a blast checking out the live BearCam at Brooks Falls in Katmai National Park, Alaska.

THE COOLEST WEBCAM IN THE NPS?

Each fall, Katmai's live web camera sends streaming video of Alaska brown bears (gigantic relatives of the grizzly) as they visit Brooks Falls to catch salmon. An ever-growing body of fans are apparently as ravenous for up-close views of the bears as the bears themselves are for the fresh fish they catch at the falls.

We heartily recommend that you check out the BearCam at Explore.org, but we also want to pass on some links to webcams at other national parks that we've come to love. More than any reading material, the images available from these national parks may make you want to fill a backpack and hit the trails. Here's a starter kit for anyone interested in diving into as many parks in the shortest possible amount of time.

Glacier National Park provides views of Apgar Lookout, an overview from Apgar Mountain of the North Fork area of the park; Apgar Village, with its visitor center, shops, and restaurants; and Lake McDonald, allowing you to stand at the pebbled shore and look out at the park's highest peaks, which are sometimes reflected in the lake and sometimes shrouded in clouds. (nps.gov/glac)

Yellowstone National Park links to a collection of webcams offering a view of Old Faithful Geyser from the spectacular visitor education center, which opened in 2010; a view of the Upper Geyser Basin, including the geyser itself; and Mount Washburn, a view that is used to track fires (this camera is typically turned to a default view at the end of fire season). (nps.gov/yell)

Yosemite National Park provides images of a number of the park's most popular sites, including Yosemite Falls, which is actually a combination of three falls (Upper Yosemite Fall, Middle Cascades, and Lower Yosemite Fall); Half Dome, including a view of the Yosemite Valley from nearby Yosemite Village; and Half Dome from 8,000 feet, taking in the High Sierra as well. (nps.gov/yose)

Grand Canyon National Park links to just one webcam of the park, which is currently undergoing maintenance, but it's worth checking back for the amazing view when the camera is back online. The camera is meant to provide weather and air quality information, but also serves to whet the appetite of future visitors and to remind former visitors of what makes this place like no other on earth. In addition, the site provides links to live webcams of the San Francisco Peaks and other vistas in nearby Flagstaff, Arizona. (nps.gov/grca)

Great Smoky Mountains National Park provides images of iconic spots in this popular park, including a view from Purchase Knob to the northeast; and Look Rock, at the western edge of the park. (nps.gov/grsm)