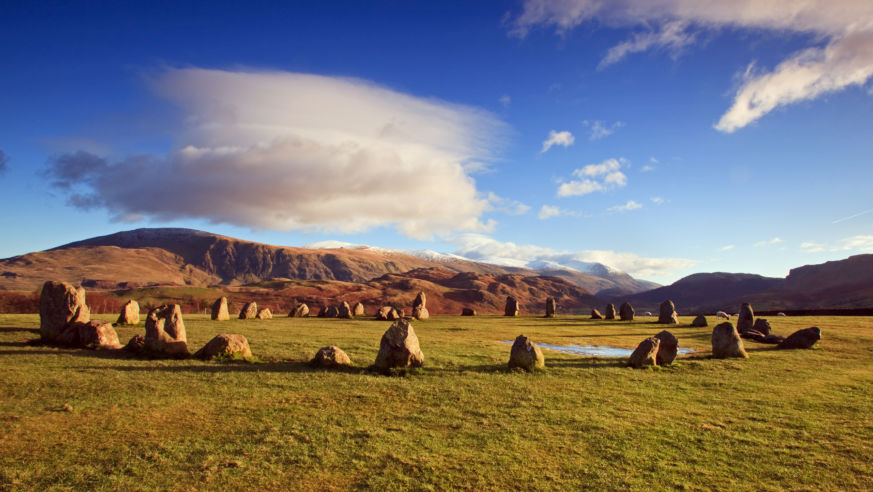 Near Keswick, in the U.K.'s Lake District, Castlerigg is one of the earliest known stone circles in Britain.

Before the Romans ever set foot on British soil, our unassuming island was well-scarred by warring tribes; yet these were no barbarians. On the contrary, our fertile land was alive with thriving settlements, sophisticated cultures and incredible feats of human ingenuity as early as 5,000 years ago. If you're planning a trip to the United Kingdom, you'll find hundreds of historical settings; from stone circles and hill forts to preserved villages and brochs. But before you book your flights and pencil in your historical itinerary, take a glimpse into the past with seven fascinating ancient sites.

Castell Henllys, Pembrokeshire. With four replica Iron Age roundhouses, Castell Henllys is an incredible site for ancient history buffs. Situated in the Wales' Pembrokeshire Coast National Park (a fantastic destination in its own right), it's been built on top of an existing hill fort, some 2,400 years old. Excavated remains have provided architects with an authentic portrait of how the Celts really lived, so today, you can grind flour and make bread just like the Celts did, before exploring the area's beautiful beaches. Head to Ceibwr, an inlet of rocks backed by dramatic cliffs, to spot porpoise.

Skara Brae, Orkney. Skara Brae—an ancient village sitting on the white sands of Bay o' Skaill, Orkney—is possibly the most famous of our archaeological sites. Offering an unparalleled glimpse into Scottish life during the late Neolithic period, it's composed of eight separate dwellings, connected by a number of low, winding passages. Amongst the stone beds, seats and shelves, budding historians can glimpse everyday life 5,000 years ago in amazing detail; precious artefacts, including jewellery, gaming dice and religious idols, are displayed in the excellent visitor centre.

Chysauster Ancient Village, Cornwall. First occupied some 2,000 years ago, Chysauster Ancient Village has some distinctly Cornish features. Although a late Iron Age settlement, its dwellings are now known as 'Courtyard Houses'; they consisted of an open area (due in no small part to Cornwall's favourable climate!), surrounded by several thatched rooms. You'll also find the remains of a 'fogou' here, an underground passage still shrouded in mystery: whether used for storage, religious ceremonies or refuge is unknown. Travel to the area during spring to admire the beautiful bluebell carpets.

Tre'r Ceiri Hill-Fort, Gwynedd. Tre'r Ceiri, or 'Town of the Giants', is thought to be one of the finest Iron Age sites in Wales. Not only does it house the remains of some 150 huts (this is one of our more expansive sites!), but also offers outstanding views to Ireland from its hilltop location, on the eastern peak of Yr Eifl. The roundhouses—some of which are actually rectangular or square—sit alongside well-preserved ramparts and gateways, with walls still four metres high in places. For keen hikers and walkers, it's an absolute must while exploring the stunning scenery of Gywnedd.

Dun Carloway, Lewis. It's one of the best preserved brochs in Scotland, and situated on the spectacular Isle of Lewis: Dun Carloway's a must when visiting the Outer Hebrides. But "what exactly is a broch?" I hear you ask. Well, brochs are fortifications found all over the north and west of Scotland, first built some 2,300 years ago. It's thought that they were the dwellings of tribal leaders, imposing and expansive as they were. Indeed, Dun Carloway still sits nine metres tall in places, but also has a great series of underground tunnels and cells. Afterwards, why not visit the nearby Calanais stone circle?

Stanwick Camp, Yorkshire. The Brigantes were the most important tribe in pre-Roman Britain, and first lived in the gargantuan Stanwick Camp. Once comprising five and a half miles of ramparts and over 700 acres of land, the site certainly grabs the imagination, if the stories haven't already: Iron Age swords and severed heads are just some of the excavated remains found here! Today, it's a great place for a peaceful stroll: start at the Church of St John (it houses carvings dating back to the 9th century), before making your way up Tofts Hill for great views of Yorkshire.

Castlerigg, Cumbria. Located near Keswick, in the Lake District, Castlerigg is one of the earliest stone circles in Britain. Thought to have been raised some 5,000 years ago, its 38 radiating stones surround an inner rectangle of ten; this all points, of course, to significant astronomical alignment, but like so many ancient sites, its exact purpose remains unknown. With panoramic views across to Lonscale, Blencathra and Skiddaw Fell, it's an amazing vantage point. And located as it is just a short drive from Penrith, you can visit King Arthur's legendary Round Table, too.