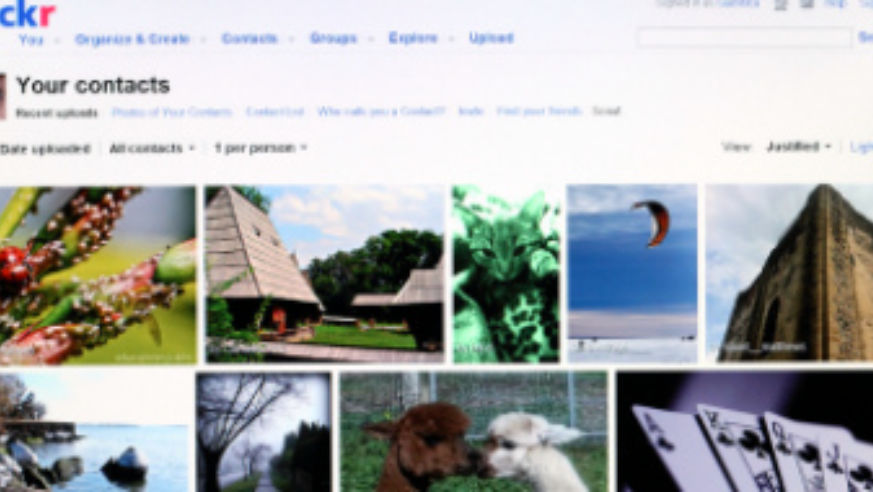 On Tuesday, the world's largest online photography storage site, Flickr, debuts a major makeover, catching up with the innovative features of rival photo-sharing and storage sites.

Photos on Flickr will appear four times larger than before. Hover your cursor over any given image, and it will pop out in a magnified view.

In another fix, uploading images will become more intuitive, thanks to a fresh drag-and-drop interface. No more clicking "blue links," searching through your hard drive, and puzzling out the mysterious names of photo file. Instead, simply look for the thumbnail image of the photo you want, and drag it into the uploader.

Overall, Flickr is moving away from its signature design of plenty of white space and small photos. In this way, it is copying the success of competitor websites, which have been publishing user photos in much larger, richer detail, such as 500px, Facebook, and Google+.

The changes have begun to appear on Flickr member's contacts pages (the most visited pages on the site) and will appear on other sections of Flickr during the next few months.

These changes are one more sign that websites and smart phone apps are ramping up the competition to become your main digital method of showing off and storing photos.

To help travelers choose the best ones for their photography, I created the following cheat sheet for photo storage and sharing sites. It is not an exhaustive list, but it highlights the online tools that are growing and that have tools that would especially appeal to travelers.

Key advantage: It has 3.5-million daily uploads and is profitable—sparing members from the risk of having to switch providers within the next few years.

Snags: The site could make it easier to share photos. Its guest-pass based system for non-members is cumbersome. But on the flip-side, Flickr has some air-tight privacy protections, allowing users to share selected images with specified contacts only. It also prevents your copyright-protected images from being "reblogged" on Pinterest, Tumblr and other sites.

Pro tip: It's worth it to pay for the annual membership fee for the option of unlimited uploads of large images. (A two-year Pro subscription is $45.) In comparison, free accounts allow for the upload of 300 megabytes' worth of imagery each month, or about 100 standard-sized photos

Snags: You can't export your photos back out of Facebook.

Coming soon: Facebook is adding wide-screen format to its photos, spotlighting them well. Soon, it will introduce ways to add "filters", such as making your photos appear as if you shot them using a Polaroid camera, says The New York Times.

Key advantage: Makes photos look beautiful, at no cost. The newcomer social networking site has had its greatest success with photographers, especially fans of HDR photography, because of the beautiful way the site presents photos in large format (2048 pixels on their broadest edge). For example, check out the Google+ page of Trey Ratcliff, who has drawn more than one million followers to see his gorgeous travel photos. (Note: You don't have to belong to Google + to see his photos.)

Snags: The fate of Google+ is still up in the air. But if the site fails, your photos will still be available for exporting through Google's Picasa storage albums. Google+ recently bought Picnik, a smart photo-editing tool, so better photo-editing will be baked-in to the site soon. (Flickr already has Picnik.)

Pro tip: As of last week, you can download a free app (Google+ for mobile) for iPhone/iPad devices as well as Android ones and instantly upload photos to your Google+ page—a handy tool for travelers.

Key advantage: Has the most seamless service for printing and shipping high quality prints and photo books. Accounts are free and allow unlimited storage of a small number of photos. Owned by HP, the site is here to stay for quite a while.

Snags: Not as flexible as other sites.

Pro tip: Do an Internet search on discount/promotion codes to save money on printing photos and photo books with the service. In recent months, its rates have been cheaper than rival service Shutterfly.

Key advantage: If you want to make a living out of photography, this site is one of the best tools for presenting your photos in the best light.

Snags: Free accounts offer little, and paid accounts cost $50 a year. On the bright side, the paid accounts come with unlimited uploads and the largest file size limits of any major photo-sharing site.

Pro tip: The site makes it easy to post images under your custom domain, meaning your own website or blog. People won't have to be members of 500px to see your images.

Key advantage: Your best camera is the one you have with you at all times, and for most people, that means their smart phone. Users of iPhone devices will find that the most popular photo-sharing app is the free Instagram.

Snags: Not available for Android devices.

Pro tip: Use CanvasPop to order large, high-quality prints of your Instagram photos.

4 Ways to Find The Best Views for Travel Photos