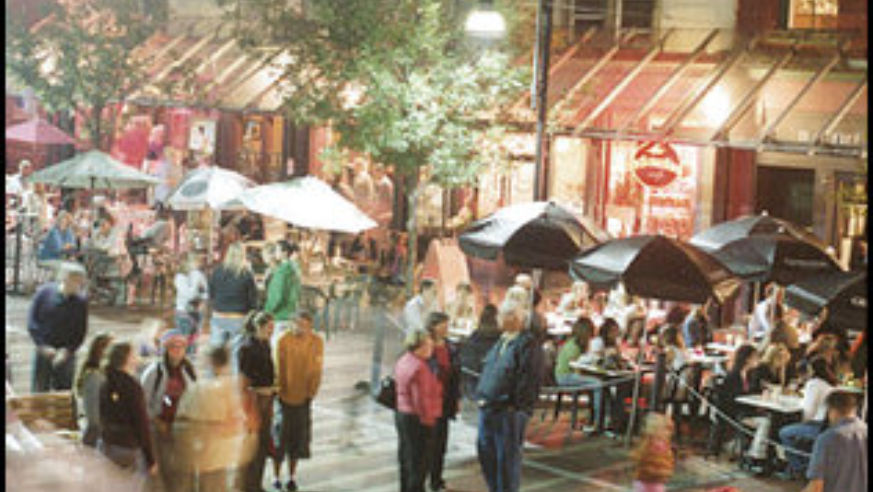 Nothing can recharge your batteries like an energetic weekend in the city. But which city?

The nearby Pisgah National Forest makes for a bounty of hiking and mountain-biking trails: Simply pick up trail maps at the Pisgah visitor center (160A Zillicoa St., 828/257-4200, cs.unca.edu/nfsnc) and then pull off the Blue Ridge Parkway at marked trailheads. George Vanderbilt was so impressed with the scenery in western North Carolina that he built his 250-room chateau 10 minutes from downtown. A day pass will get you into the Biltmore House and winery for self-guided tours (and in the case of the winery, tastings), and also the Frederick Law Olmsted--designed gardens and 8,000-acre estate (1 Approach Rd., off Highway 25, 877/324-5866, biltmore.com, from $38).

Asheville's natural setting appeals to New Age types--as any of them can tell you, the name of the city's beloved vegetarian restaurant, Laughing Seed Café, comes from an Indonesian legend in which the seeds of a sacred plant are believed to allow communication with the gods (40 Wall St., 828/252-3445, Harmony Bowl of brown rice, beans, vegetables, tofu, and sesame-ginger dressing $9). Early Girl Eatery makes its own breakfast breads and vegan sausage, and gets everything else from local farms and bakeries (8 Wall St., 828/259-9292, shrimp and grits $7.25). And seven days a week, local growers bring their gorgeous products to the Western North Carolina Farmers' Market (570 Brevard Rd., 828/253-1691).

Asheville is home to four breweries and a lively bluegrass, country, and American roots music scene. Barley's Taproom & Pizzeria hosts live music at least three times a week and has 53 local and international beers on tap (42 Biltmore Ave., 828/255-0504, pint of Pisgah Pale Ale $3.50). Highland Brewing Company, in the basement of the same building, runs free brewery tours by appointment (42 Biltmore Ave., 828/255-8240, entrance around the back). Just 10 minutes from downtown, find unimpeded stargazing from the porches of two-bedroom cabins--which sleep up to eight, with a kitchen and fireplace--at The Pines Cottages (346 Weaverville Hwy., 828/645-9661, ashevillepines.com, two-bedroom from $125, one-bedroom from $45).

You can make a whole weekend of a six-block stretch of South Congress Avenue, a district known as SoCo. At FactoryPeople, try on a fancy pair of jeans--Nobody, Habitual--and the staff will hand you a bottle of Red Stripe to ease the decision-making process. Local DJs spin music in the store and pump it upstairs to the rooftop patio (1325 S. Congress Ave., 888/322-8002). Parts & Labour stocks clothing exclusively by Texas-based designers (1604 S. Congress Ave., 512/326-1648), while Blackmail sells women's and men's apparel from all over the world--but only in black (1202 S. Congress Ave., 512/326-7670). The tacos al pastor--pork marinated in orange juice, then roasted, wrapped in a corn tortilla, and topped with pineapple and cilantro--at Guero's are considered the best in town (1412 S. Congress Ave., 512/447-7688, tacos $3). The restaurant's other draw is its proximity to the Congress Avenue Bridge: Every night at dusk from late spring to early fall, spectators line up to watch 1.5 million bats fly from their home under the bridge.

Burlington is the largest city in Vermont, which ain't saying much. An eight-mile bike path takes in some of the best views of Lake Champlain. (Rent a bike for $12 per hour at Skirack, 85 Main St., 800/882-4530.) And Perkins Pier, a municipal park and boat launch at the foot of Maple Street, is a convenient departure point for kayaking (Waterfront Boat Rentals, Perkins Pier, 802/864-4858, kayak rentals $10 an hour). Considered to have the tastiest brunch in town, Penny Cluse Café combines great people-watching through huge windows with a Southwestern-themed menu, including mammoth breakfast burritos (169 Cherry St., 802/651-8834, $6.75).

Downtown's Church Street is pedestrian-only and lined with stores, coffee shops, and boutiques; one of the best of these is the casual yet stylish boutique Sweet Lady Jane, which stocks Hobo International bags (40 Church St., 802/862-5051). The Daily Planet restaurant reflects Burlington's mellow style; after dinner, people settle in for the evening with the bar's popular drink, a Dark 'n' Stormy--ginger beer and dark rum (15 Center St., 802/862-9647, $6).

At the downtown Portland Saturday Market, artisans congregate under the west end of Burnside Bridge, selling artwork, homemade jam, and clothing made with recycled materials (March--December, 503/222-6072, also open Sundays). A five-minute walk away, Powell's City of Books has an extensive selection of used and new titles on anything and everything alternative (1005 W. Burnside St., 503/228-4651). Despite its hemp-happy reputation, Portland is also home to independent upscale boutiques. Take the streetcar to Northwest Portland: Local jewelry designers sell their work at Twist (30 NW 23rd Pl., 503/224-0334), and women's designers from the Pacific Northwest are at Seaplane (827 NW 23rd Ave., 503/234-2409) and The Bee and Thistle (2328 NW Westover Rd., 503/222-3397).

Next door, the Jupiter Hotel, a refurbished '50s motel, refers to rooms with two queen-size beds as The Deuce; some rooms are outfitted with city- and forest-scene murals and Blu Dot furniture (800 E. Burnside St., 503/230-9200, jupiterhotel.com, from $79).

Most of Santa Fe's contemporary, 19th-century, and Native American art galleries are in adobe buildings lining Canyon Road. A four-day, $18 pass gets you into the Museum of Indian Arts & Culture, the Museum of International Folk Art, and the Museum of Spanish Colonial Art (all on Museum Hill), as well as the Palace of the Governors and the Museum of Fine Art. The Wheelwright Museum of the American Indian is free (museumhill.org).

The world's largest collection of works by Georgia O'Keeffe is housed two blocks from the Plaza at the Georgia O'Keeffe Museum (217 Johnson St., 505/946-1000, $8). To see the landscapes that inspired her, take the 1.5-mile hike through the Nature Conservancy's Santa Fe Canyon Preserve (Upper Canyon Rd. at Cerro Gordo Rd., 505/988-3867). Exporting Southwestern style helps Santa Fe thrive: Local Native Americans sell their handcrafted sterling silver jewelry and beadwork under the portal of the Palace of the Governors in the Plaza--at prices far lower than those in the stores lining the square (105 W. Palace Ave.).

Locals and tourists alike line up at Cafe Pasqual's for the chili en nogada, a stuffed poblano chili in walnut sauce (121 Don Gaspar Ave., 505/983-9340, $21). In warm weather, the whole city seems to hang out on the patio of the Cowgirl BBQ & Western Grill (319 S. Guadalupe St., 505/982-2565). There's live music Tuesdays--Sundays, margaritas aplenty, and New Mexican favorites like chile rellenos ($10). The El Rey Inn, a self-described old-style motor court, has several adobe-style suites on five acres of garden property. It's about two miles from downtown (1862 Cerrillos Rd., 800/521-1349, elreyinnsantafe.com, from $95). And no trip to Santa Fe is complete without a relaxing dip in a private outdoor hot tub at Ten Thousand Waves Spa & Resort (505/992-5025, tenthousandwaves.com; private outdoor tub from $20).