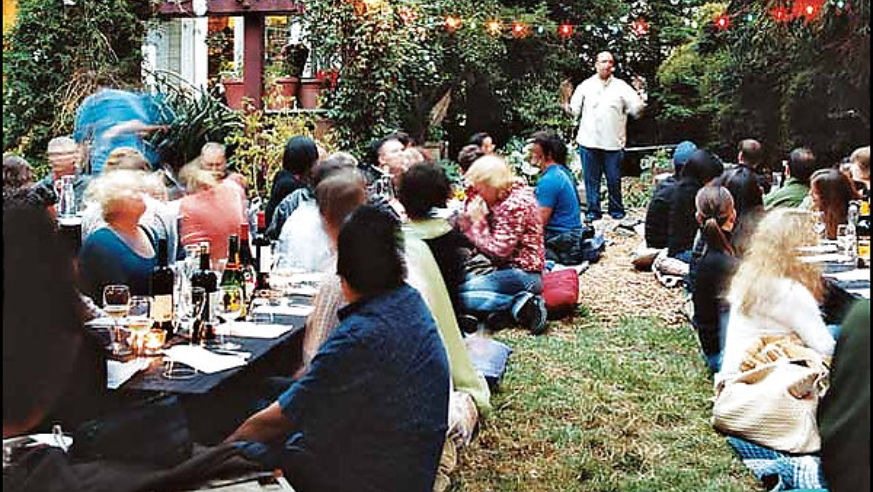 Thanks to the Ghetto Gourmet, the best dinner you have this year might not be at a restaurant.

It's 7:30 P.M. on a Saturday, and the front door of a Victorian house in Oakland, Calif., is wide open. The owner of the home directs arrivals through the kitchen--where Louisiana shrimp stock simmers on the stove and delicate tomato-and-white-corn tarts are being assembled on a tiled table--and out to the backyard. Guests are gathering under a canopy of trees, sitting on the colorful cushions that surround the low tables.

Since 2004, a "wandering supper club" called The Ghetto Gourmet has been organizing underground dinner parties in the Bay Area. "We want events that are comfortable and geared toward people getting to know each other," says Jeremy Townsend, 30, who cofounded the club with his brother Joe, 25. "It's definitely about more than just the food."

All that's required to join is an online reservation made at theghet.com and a donation (which ranges from $30 to $75, depending on the event). In return, members are treated to a four-course meal prepared by an off-duty professional chef, line cook, or caterer (past participants include Serge Santiago, formerly of Mecca in San Francisco, and Damon Bruner, onetime chef at L.A.'s Cinnabar); some kind of unusual entertainment (anything from poetry readings to ancient Hungarian chanting); and the opportunity to meet lots of interesting people.

Printed menus, glassware, and candles lend a sophisticated feel to the BYOB parties, which have been held not only in private homes, but at museums, in parking lots, and on organic farms. The Ghetto Gourmet has become so popular that it now hosts an average of 75 events a year across the country, in cities like L.A., New York, Chicago, Miami, and Nashville. On April 1, the supper club embarks on a three-month cross-country tour that will hit Atlanta, New Orleans, Albuquerque, and Washington, D.C., among other cities.

As with any get-together, the success of a Ghetto Gourmet event depends on the attendees. The evening in Oakland starts off with birthday wishes and a pregnancy announcement, but most people haven't met before. The garden is soon full of cocktail-party chatter. "It's great," says Ray Aguilera, a writer. "When you go to a restaurant, you can't really talk to people you don't know."

A cabaret duo called the Auditorials is part of the evening's entertainment. They heard about Ghetto Gourmet through word of mouth and discovered that, although it's not a lucrative gig, it's a satisfying one: Their payment is a dinner prepared by local chef Peter Jackson that includes Niman Ranch grilled rack of lamb in a smoked-tea barbecue sauce. "We're literally singing for our supper," laughs Mo Mellady.

About a third of Ghetto Gourmet's guests return for another dinner. Jen and Peter Bender have attended eight dinners and were recently inspired to host an event in their North Berkeley home. "We actually got to meet people who live nearby," says Jen.

While dessert--a glazed limoncello zabaglione and a vanilla-custard cake topped with fresh berries--is being served, guests perform an impromptu concert by clinking forks against wineglasses. A woman in a beaded cardigan provides the percussion by banging on a bucket drum. "I like the combination of great food and an offbeat setting," says Betsy Brown, a marketer who attended the dinner with her mother; it was their first Ghetto Gourmet event. "There's always the potential for a surprise."