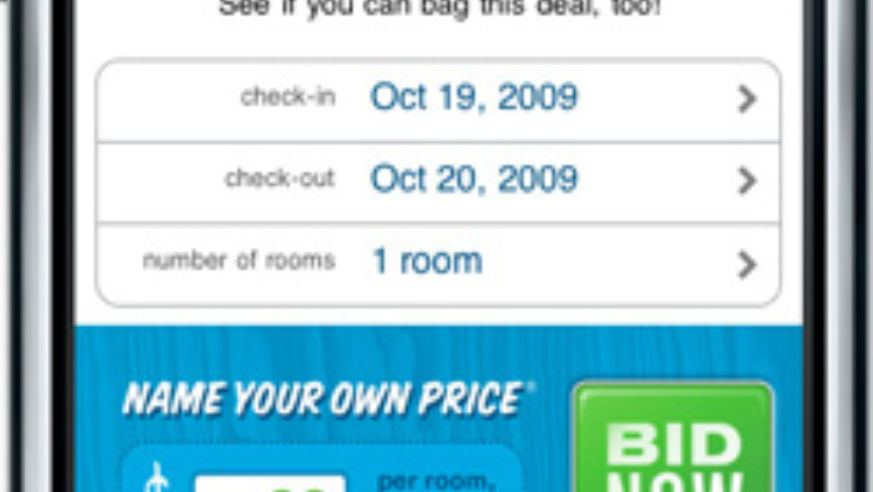 It's only been available for a day, but Priceline's new Hotel Negotiator app for the iPhone and the iTouch is already one of the top 5 free travel apps on iTunes.

No wonder it's popular. This app finally makes it practical to bid on a room at the 11th-hour through Priceline's famous blind-booking system.

Say you've spontaneously decided you're going to need a hotel for tonight. But you don't want to spend more than 10 minutes getting a deal. Priceline's app will help you make a quick, smart bid. It tells you the average successful bid by other Priceline users—who've generally had more time on their hands to craft their bids—think is the lowest possible bargain for your preferred type of hotel in the neighborhood you're visiting.

A tip: Lowball your bid, meaning, pick a lower bid than the one the Hotel Negotiator app tells you is average. After all, you're booking at the last-minute, and hotel rooms are a "perishable" good. The hotel owner may be aching to sell the room at a discount as the clock ticks down because his room will go vacant otherwise. (The exception, of course, is if there's a big convention or sporting event going on in town.)

Here's how the app works:

Shake your iPhone or iTouch, and the average recent winning hotel bid in the neighborhood where you're standing will be displayed. Specifically, you'll see the median successful bid made by other Priceline customers in the previous month in the class of hotel (such as four-star) that you've selected.

Enter a bid above or below that average bid, and then find out if your offer is accepted. Bid on a room up until 11 p.m. ET of the night you need it.

Up until now, few vacationers who've found themselves needing a hotel on short notice have had their notebook PC and a WiFi connection readilyy at hand—and have also happened to have the time to make a smart bid via Priceline (which takes some research and, often, multiple bids). This app speeds things up, letting you make a bid that will get you a great deal quickly.

As usual, you don't know for sure which hotel you'll stay at, and the less you offer the less likely that your offer will be accepted. But if you offer too little for a room and are rejected, you can make another pretty quickly. Jf you're out of time, you can buy a hotel using Pricline's traditional hotel listings, where the name and full details are shown and you pay the standard retail room rate. Of course, this app is also good for booking a room months out, too. But using a regular computer instead of a smartphone might still be easier for such a purchase.

Download Priceline's new Hotel Negotiator app for free. If nothing else, it's fun to watch. On the opening screen, spokesman William Shatner "breaks through" your device's screen.

If you give it a try, let us know if you think it's worthwhile or have any discovered any tricks to maxing it out.

Travel: "There's an App for That?"