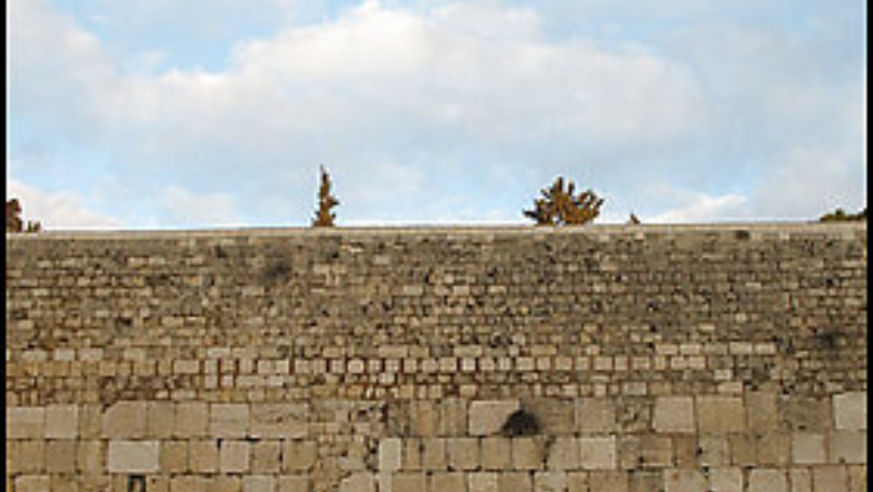 It can be intimidating and dangerous. It's also an experience you'll never forget

In the harsh light and dry wind of an August afternoon, I stepped ahead of my wife and children, crossing a field of pine needles to two cylinders of bronze rising 26 feet high. A taxi driver had brought us to this place, atop a ridge in the Judean Hills, along a twisting back road long ago supplanted by the main Jerusalem-Tel Aviv highway. He had told me there was a monument here called Megillat Ha'esh, the Scroll of Fire, and it was a place few Israelis, much less tourists, had ever seen. Indeed, we had the site to ourselves, and the ground, undisturbed by rain for months, did not reveal any other footprints.

As I drew closer to the sculpture, I saw why its creator, Natan Rapoport, had chosen the name. The two columns represented the scrolls of Judaism's sacred texts, not only the Torah but also the saga of Esther, read on the holiday at Purim, and of Ruth, read on Shavuot. Instead of words, these metal scrolls bore bas-relief images that depicted Jewish history from biblical times through exile, shtetls, death camps, resistance in the Warsaw ghetto, and finally the creation of modern-day Zion in the 1948 war.

The hillsides below were covered with millions of trees, many of them paid for with American donations to the Jewish National Fund. I vaguely remembered having received certificates for one or two trees as presents when I had my bar mitzvah. Even then, barely a year after Israel's victory in the Six-Day War, I somehow resisted the place, not because I opposed it, but because loyalty felt to me like an expectation, a requirement. When friends made the obligatory summer trip to Israel after high school, they returned with tales of crowds shoving their way onto buses and brash paratroopers seducing the sexiest American girls. "It's like a whole country of Sicilians," one friend explained to me, "except they're all Jews."

For much of my life, I hadn't thought Israel had much to do with me. So I chose other destinations--Greece, Spain, and England with my parents; Bali and Hong Kong for my honeymoon; Ghana, China, South Africa, and the Dominican Republic for journalistic assignments; New Zealand, Japan, and Egypt on my own. By the time I had entered my forties and begun to feel a curiosity (and tribal guilt) about never having gone to Israel, I didn't know how to undo the pattern.

In researching a book about the conflicts within American Jewry, though, it became apparent that I would need to conduct a number of interviews with Israelis. And so, in the spring of 1999, I made my first visit. I can still remember sitting in a jitney, sweaty and jet-lagged and cramped, as the road from the airport began climbing the limestone slopes heading east toward Jerusalem, and realizing these must be the Judean Hills, both an ancient artifact and a present reality. When I mentioned that moment to Yossi Klein Halevi, an American-born Israeli journalist whom I interviewed on the trip, he said, "When you get to Israel, you figure out pretty quickly if it's a love affair or not."

Yossi didn't mean an uncritical infatuation, which was exactly what I had refused for such a long time. He meant love with all its complexities, heartbreaks, and endurance. On that first trip, during the optimistic heyday of the Oslo Accords, I went with a mixed-gender congregation to the Western Wall on Shavuot and found our group bombarded with insults and plastic bottles by some ultra-Orthodox fanatics. A moment like that will disabuse you of romantic illusions mighty fast.

But the cool winds of a Jerusalem dusk, the afternoon light on the limestone buildings, the Bauhaus architecture of Tel Aviv, the breakfasts of feta cheese, olives, hummus, and the English-language edition of Haaretz--it all left me impatient to return. I felt that I had discovered a living country rather than a museum paying reflexive homage.

And when I came back the next two times, in June 2001 and May 2002, I found a country living in defiance of death as the possibilities of Oslo collapsed into the terrorism of the second intifada. I was at Newark airport awaiting my flight to Tel Aviv when I saw CNN's coverage of the suicide bombing at the Dolphin nightclub. A cabbie in Jerusalem, driving me from the Old City to the Mahane Yehuda market, remarked aridly, "I have the honor of driving the only tourist in all Israel." Absent tourists, Israel showed its resiliency all the more clearly, in the brave way people flocked to an outdoor book fair or the way the TV skits of comedian Erez Tal made satire out of omnipresent danger.

Still, I did not feel confident bringing my wife and children during those times. I had promised Aaron we would make a family trip as my bar mitzvah present to him; fortunately, by the time he celebrated that ritual in March 2005, enough calm had returned to Israel for me to make good on the promise. In my solo trips, I had never visited the major museums or archaeological sites, except for the Wall and the Old City, because I knew I wanted to encounter them with my family.

We packed all that we could into our 10 days during August 2005: the Holocaust museum Yad Vashem and the Shrine of the Book with the Dead Sea Scrolls; the fortress of Masada and the Roman ruins of Caesarea; the artists market of Nahalat Binyamin in Tel Aviv; and the collection of scale models at the Mini Israel park.

I hoped for more than the diversion and entertainment of an ordinary family vacation. I hoped to give my children the sense that Israel had something to do with them. Maybe that epiphany came for Aaron when he found a shard of pottery in the dusty soil of Caesarea, and maybe it came for my daughter when she selected the purple silk prayer shawl she would wear for her bat mitzvah.

Sarah marked that rite of passage in November 2006. And it turns out to have been fortunate that we bought her tallith so far ahead of time. We had planned to visit Israel last summer, for a more in-depth tour of Haifa and the north. Sheikh Hassan Nasrallah and Hezbollah put an end to those plans. But we are already making our reservations for this summer. And when we travel through the Galilee, my daughter will get to see one of her bat mitzvah presents, a donation from Yossi's family to the Jewish National Fund, which is devoted to replant-ing the forests scorched by Hezbollah's rockets. Whatever is green and growing, she will be able to consider some small bit of it hers.