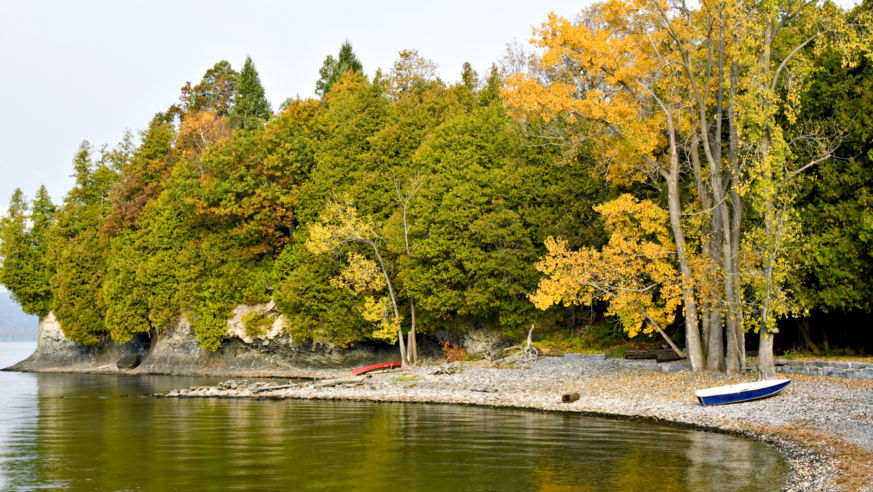 Fall-foliage season can make much of Vermont less idyllic than you'd hope. All the more reason to head north, where you'll see more bikes than cars.

I like to think I know Vermont pretty well. My parents have lived there for nearly 15 years, and my husband and I spend each winter crisscrossing the state looking for the best snow and the shortest lift lines. Lake Champlain, however, is a total mystery to me. I've heard that the Champlain Islands--Grand Isle, North Hero, and Isle La Motte--are still relatively undiscovered by leaf-peeping flatlanders. No wonder: I always thought they were part of Canada. I set off with my copilot Moira, a photographer, to find out what they're all about.

It's September, so we're prepared for traffic, but the only slowdown on Route 2, the main artery connecting the islands, comes when we're caught behind a tractor. Although we see splotches of gold here and there in the trees, the weather feels more like summer than fall. And that's what we were hoping for: Our plan was to come just a little early to avoid the prices and crowds of peak season.

The village of North Hero isn't much more than a handful of buildings along Route 2. The 1824 county courthouse in particular stands out. Its gilded belfry glints in the sun, and its walls are made of odd reddish-beige stones, sourced from a quarry on nearby Isle La Motte. In small-town Vermont, it's not uncommon for a building to serve more than one purpose, andHero's Welcome, sure enough, functions as a general store, gift shop, café, and bakery--and the post office is attached. Ignoring the displays of Vermont-made products (maple syrup, pancake mix, salsa, etc.), Moira and I make a beeline for jars of Swedish Fish, Tootsie Rolls, and jawbreakers. We also choose from a list of sandwiches that hangs above the counter. My heart is set on a Trackeur (hickory-smoked ham, Vermont cheddar, tomato, and honey-mustard) and Moira, who doesn't eat meat, orders the Vegetarian Princess (sprouts, cheddar, and hummus). I have to hold back from teasing her.

We plan to spend the night atShore Acres, a low-slung inn with 23 rooms, 19 of which are lakefront. There are tennis courts, a nine-hole golf course, and even a croquet set, but I have my eyes on one of the dozen white Adirondack chairs on the lawn. While Moira takes pictures, I plonk down with my book; next to me, a couple is quietly reading and sharing a bottle of wine, their dog at their feet. I learn they're from Massachusetts and they've been holed up at Shore Acres for a week, barely leaving the property. Looking east across the lake, I can see the jagged peaks of the Green Mountains in the distance. Boats sail past, birds dive for fish, and clouds create interesting shadows on the glassy water.

North Hero Houseis an inn and restaurant that often serves as a base for trips run by Bike Vermont and VBT Bicycling Vacations. When we arrive for dinner, the place is positively hopping. A local musician strums "Tiny Dancer" on his guitar in the bar area while a dozen farmer-tanned bikers sing along. As I savor pan-roasted chicken breast served in a rich pancetta-and-sage sauce, I overhear a group of 50-somethings crowing about the many miles they've ridden. Only then do I begin to feel pangs of guilt about my sedentary afternoon.

We wake up to a bluebird sky and warm sun. The conditions are perfect for a drive to the Alburg Peninsula--and a picnic. At Simply Country, a barn-like antiques shop with a fairly typical jumble of old books and rusty kitchen gadgets (now closed), we grab a bag of plump tomatoes for a dollar a pound; they'll go nicely with a baguette and a bottle of sauvignon blanc from Hero's Welcome.

We hear French everywhere, and now it makes sense: Alburg is a sliver of land that juts south 10 miles from the Canadian border, and many Quebecers vacation here. Because of its remoteness, the area was a haven for booze smugglers during Prohibition.

After a quick visit toAlburg Dunes State Park--which includes 628 acres of wetlands and a long crescent beach--we follow West Shore Road north along the water toLakes End Cheeses. Alburg native Joanne James makes some of the best chèvre I've tasted. It's tangy and creamy and flavored with herbs; I buy two small rounds to add to our picnic. Joanne started out making chocolates and later added cheese. "My neighbor kept bringing me goat's milk she wasn't using," she says. "I didn't have the heart to tell her I didn't need that much, so I began experimenting." Joanne now has 40 goats, but the black one named Boss is clearly her favorite. On a tour of the property, Boss head-butts the others out of the way to get closer to us, and then mugs (smiles, even) for Moira's camera.

Lake Champlain is a picnicker's paradise, with lots of parks and tables to choose from. We ultimately decide on a beach near St. Anne's Shrine on Isle La Motte, the smallest and most geologically interesting of the islands. The southern third of the island is a fossil reef, believed to be the oldest in the world. There's loads of history here as well. Explorer Samuel de Champlain landed on the island way back in 1609, and it's the site of Fort St. Anne, Vermont's oldest settlement, founded by the French in 1666.

We booked a room atRuthcliffe Lodge, a lakefront inn owned by Mark and Kathy Infante. No sooner have we put our bags down than we're introduced (by way of a wet-nose kiss to the back of the knee) to the Infantes' sweet but slightly wild-eyed goldendoodle. Moira valiantly tries to photograph Bosco, but he's far more interested in convincing her to play fetch with his soggy stick. Mark sets us up with bikes, helmets, and a map. The roads are pretty flat and there's a slight breeze at our backs. We whiz down The Main Road, stopping briefly to buy McIntosh apples at the roadside stand of Hall's Orchard. We linger longer at Fisk Quarry Preserve, where we get a glimpse of the ancient reef's structure: round, white fossils (early relatives of sea sponges) in the quarry walls.

Any good we did with our bike ride is completely undone by a carb-tastic dinner at the Ruthcliffe. Mark's Italian specialties--chicken Parmesan, veal marsala, seafood Alfredo--are served with bread and butter, soup, salad, pasta, and a vegetable. Most everything is slathered in hot cheese, delicious but decadent.

Breakfast is equally over-the-top: eggs, bacon, and a stack of buttermilk pancakes, which I literally drown in dark, thick maple syrup. A final stick throw for Bosco and we hit the road, heading to Grand Isle. North of the village of Grand Isle, we findHyde Log Cabin. Constructed of rough-hewn cedar logs around 1783 for Revolutionary-War-veteran-turned-surveyor Jedediah Hyde Jr., it's one of the oldest cabins the United States. There's a fire roaring in the fireplace and a collection of 18th-century housewares, including a spinning wheel and a cradle. Moira and I are used to tiny New York City apartments, but we're astounded when the caretaker tells us that Hyde and his wife raised 10 children in the 20-by-25-foot room.

It's only at this point in the trip that we realize we haven't actually gone out on the water yet, so we decide to take the car ferry from Grand Isle to Plattsburgh, N.Y., home to a state university. The ride lasts 12 minutes each way, just long enough to get out of the car and scramble up to the top deck. As I scan the surface of the water for Champ, Vermont's Loch Ness Monster, I get the full effect of the lake's size (435 square miles). It's so long that, looking south, I can actually see sailboats disappear over the horizon.

Adams Landing B&Bis a five-minute drive from the ferry. Sally Coppersmith and Jack Sartore moved from Burlington in 1999 and opened their lakefront home up to guests last year. There are three rooms in the main house and an attached apartment for longer stays. While chatting with us over wine and cheese on the covered porch, Jack mentions that he's planning to dry-dock his motorboat for the winter the following week. Perhaps because we're the only guests that night, he offers to take us out on a sunset cruise, one of the last of the season for him. We hug the north shore of the island and shoot straight through The Gut, a small bay that separates North Hero and Grand Isle. When Jack swings the boat around and sets a course for home, we're headed southwest, so we have an extraordinary view of the red-orange sun as it slips behind the Adirondacks.

Sally prepares a breakfast of Western omelets, hash browns, and buttery croissants and serves it on the screened-in porch. We leave Adams Landing reluctantly and drive south toAllenholm Farm, Vermont's oldest working orchard. In business since 1870 and run now by the fourth, fifth, and sixth generations of the Allen family, the 300-acre farm has a gift shop, tractor rides, and a small petting zoo. Moira and I join a bunch of families on a wagon ride to the orchard. Five minutes later, we're filling our bags with Northern Spy, one of my favorite varieties of red apple. At one point, we turn a corner and come face-to-face with a grazing donkey.

Grapes tend to thrive in South Hero, too. Nine-year-oldSnow Farm Vineyardis Vermont's first commercial winery, and it's still the only one in the islands. The varietals, including seyval blanc, Riesling, and vignoles, are similar to those grown near the Finger Lakes. We taste four of the wines for free, and then I pony up $2.50 to try the ice wine. I'm skeptical: Vermont cheddar, Vermont maple syrup, even Vermont salsa--but Vermont wine? It's a nice surprise, sweet and fruity, with a hint of honey. In other words, a beautiful addition to tomorrow's picnic.

This trip is not about great distances: Burlington International Airport (served by JetBlue, US Airways, and Continental Express, among others) is less than an hour from the Sandbar causeway that leads to Grand Isle, and it takes mere minutes to get from one island to another. The islands are connected by small bridges, and there are no tolls. While it's difficult to get lost, you'll still want a good map. The Chamber of Commerce in North Hero, next door to Hero's Welcome, gives out free maps of the area (802/372-8400, champlainislands.com). To time the trip right, you might check out Vermont Tourism's Foliage Fore-caster at vermontvacation.com.