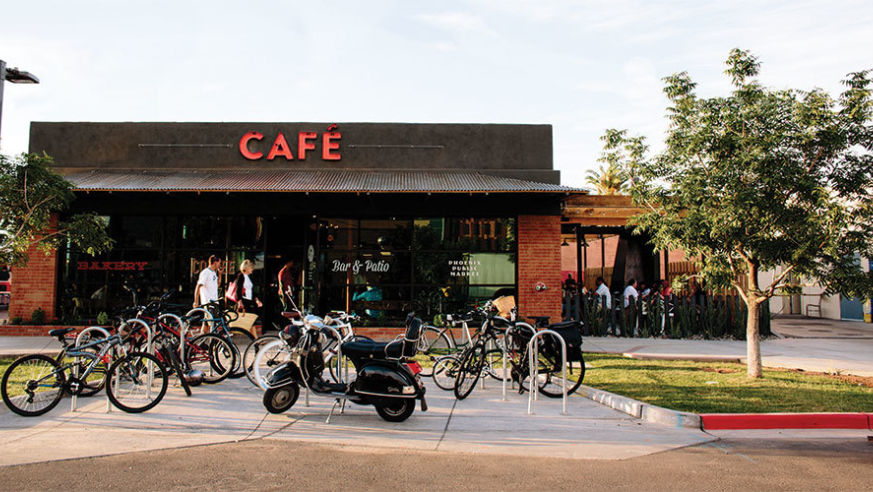 From freshly pressed olive oil to peach pie to fruits and veggies galore, the Mesa Fresh Foodie Trail is a culinary mother lode just outside Phoenix.

The glorious disorientation of it all first struck me while listening to a young woman exuberantly explain to a room full of about 75 people the differences between late harvest and early harvest olive oils. She passed around samples in itty bitty paper cups and explained how to taste it. (“Pour it all on your tongue and smoosh it on the roof of your mouth.”) She explained then how to assess it with the attention sommeliers pay to every sensory detail of wine. (Is it balanced or robust? Bitter or more buttery?)

Just your basic average February afternoon in the blazing sun of the Arizona desert. I was in Queen Creek, Arizona, about half hour southeast of Phoenix. It was only one stop on my two-day spree through the Mesa Fresh Foodie Trail, which, in addition to Mesa, Arizona’s second largest town, includes the neighboring small towns of Queen Creek and Gilbert. Established in 2016 to showcase the area’s culinary bounty, it’s a perfect model of the growing movement in agritourism. And it’s delicious at every turn.

Before we embarked on the trail, we fueled up at the Phoenix Public Market Café, a spacious, rustic-chic eatery and bar that opened in May 2013 and offers a wealth of options for carnivores and vegans and vegetarians alike. (See: mesquite-roasted BBQ pulled pork. Also: Superfood Salad) The menu focuses on seasonal ingredients, much of which is purchased at the year-round farmers’ market that operates on Saturdays in the neighboring lot, and the emphasis on local fare extends beyond the kitchen to the bar, where local beers rule, the coffee station, and the cute market section. We picked up some fresh locally roasted Cartel Coffee and hit the road. 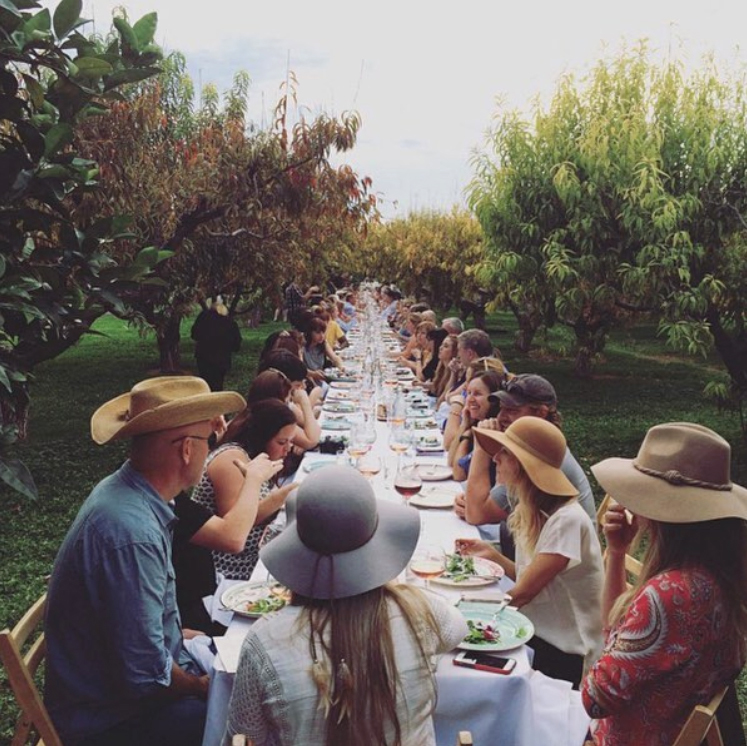 People come together over true food at Agritopia (@agritopia/Instagram)

Agritopia is exactly what its name implies: a 160-acres urban farm, 11 of which are devoted to an organic farming. There are several dozen homes on the property. What started in 1927 as a farm run by homesteaders has grown into a metropolis that now houses Joe’s Farm Grill, a bustling eatery with indoor and outdoor seating that evokes the burger joints of the 1950s, a sleek yet cozy café with cement brick walls, overflowing pastry cases, and shelves of indulgent cupcakes, and an indoor market featuring a beer bar selling local brews, housewares shop, a paper store, and more. Date palms, citrus and olive groves, grapevines, peach orchards, community gardens and much more dot the landscape. Locals buy produce through the honor system in a small 24-hour market space and picking is a pastime that attracts visitors far and wide. “You don’t have to live here to pick, you just have to be excited about it,” says Joe Johnston, whose father bought the farm in 1960. Today Joe, a recovering engineer, oversees the varied operations. We caught him on the premises and he walked us through the property, explaining that the Grill’s dining room is located in a space once occupied by his family’s living room, the date palms are the legacy of Lebanese immigrants who settled here, and the widespread reach of the regional farming. (About 90% of the lettuce in New England comes from Arizona, he says.) 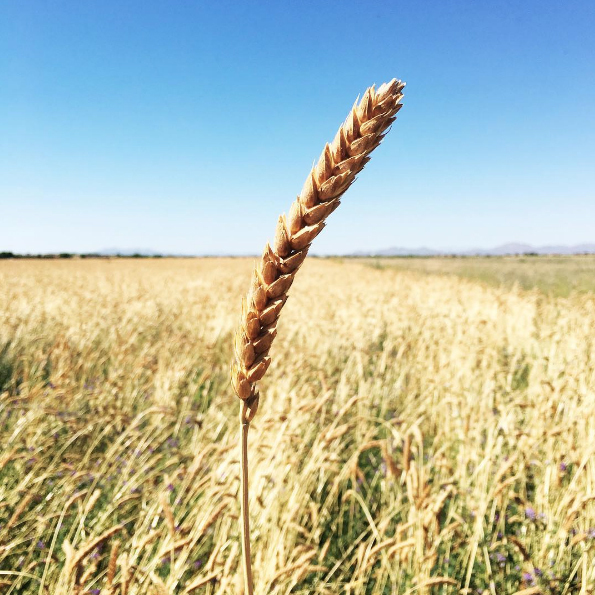 Hayden Flour Mills makes crackers and other products with White Sonora, one of the many OG heritage grains. (@haydenflourmills/Instagram)

By 2019, Steve Sossaman and his family will celebrate a century of being on the 800 acres that make up Sossaman Farm. Little surprise, then, that he operates the farm using old-world techniques, like crop rotation, a natural method of keeping the ground fertile. The main attraction here is the mill, a business that’s been operating since 1870 (though originally it was located in Tempe.) They use an old-school stone mill to create flour with heritage grains. Steve, a farmer, oversees proceedings here. He waxed poetic (read: geeked out) to me about those ancient grains: Ethiopian Blue, Tibetan purple, Roman Farro. They can be traced back to the Fertile Crescent, so they thrive in Arizona because they don’t need much water. Their deep root systems, he explained, absorb more nutrients and minerals (code for “flavor.”) The intensely earthy flavors of the crackers that are made with theses flours are intriguing, to be sure, but the stories behind them are even more captivating. Roman Farro is referred to as “Jesus wheat” because it’s been around nearly that long; white Sonora was brought to the US around 1700 from Spain by a priest who used it to convert Indians because at the time it was that you could only take communion with a wheat wafer. His is one of the handful of mills to make crackers and other products. I was thrilled to find them in Whole Foods when I returned home to New York. 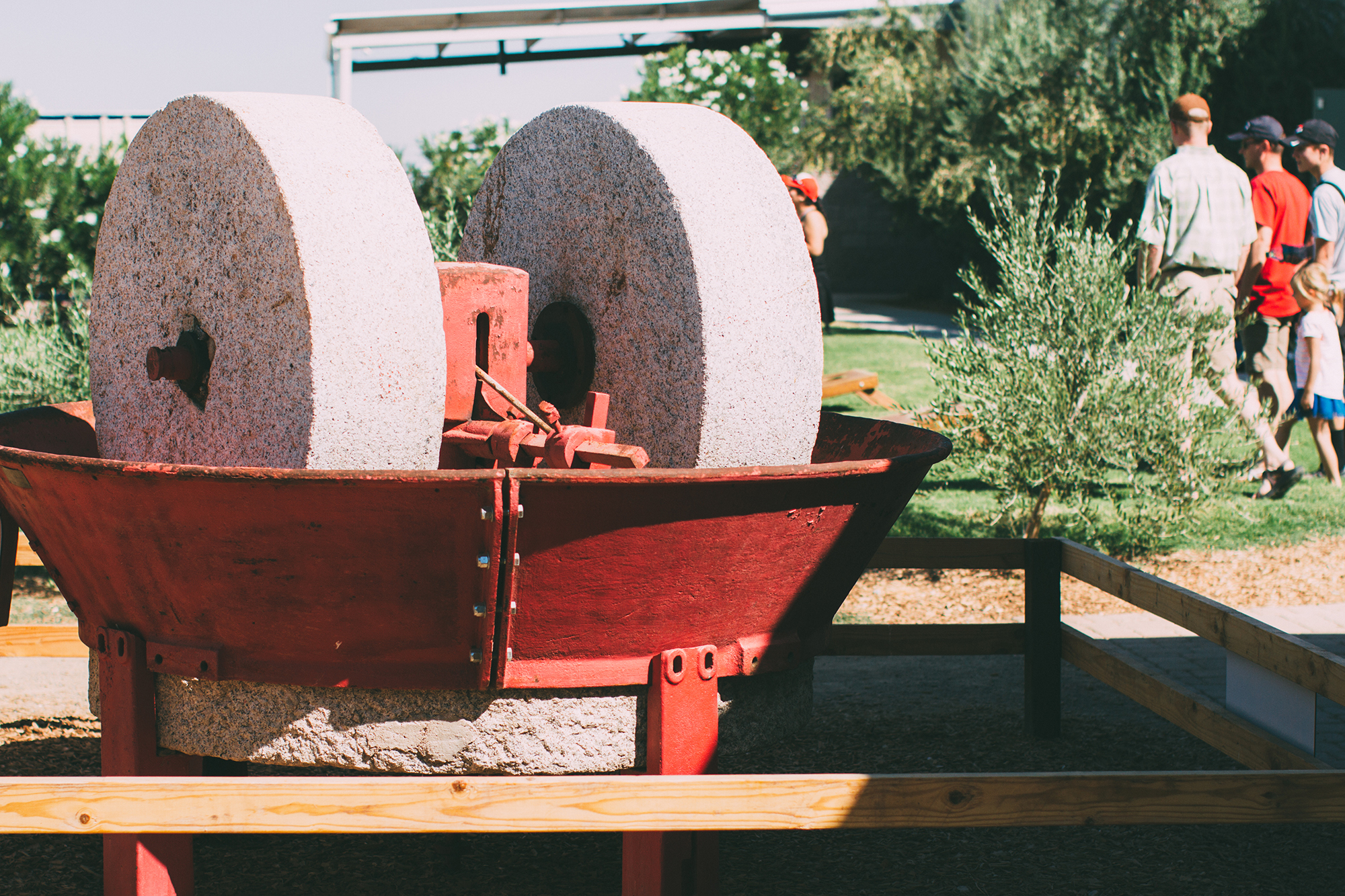 “We’re here today to learn about extra virgin olive oil,” announced the animated young woman standing in front of a flowchart mapping out olive oil production. “What’s the big deal? Why does Rachel Ray always rave about EVOO? For one thing, it’s full of good things: polyphenols, antioxidants, omega threes, vitamins. It’s the best fat you can put into your body. And it’s delicious.” She quickly launched into a salvo of astounding trivia: Olive oil dates back to before time of Christ. Ancient Romans have references to it in their writings. Olive trees can live to be up to 3000 years old.

At the Mill, everything you assume about EVOO’s European identity will be blown to smithereens. Founded by husband and wife team Perry and Brenda Rea, they presently grow 16 varietals of olives—Italian, Greek and Spanish—onsite. There’s a stone mill outside, a showpiece, that comes from Italy’s Calabria region. Inside, is the mill from Turkey that’s used to make the product. It’s referred to by the sleek name of Olive Max 33 and the Reas were the first to bring one to the US.

At the mill, you learn that each tree can produce anywhere from 50 to 300 pounds of fruit and the Olive Max 33 can process 2.5 tons of olives per hour. Roughly speaking, for every ton (2000 pounds) of olives yields approximately 30 to 45 gallons of oil. In the desert.

It was the tail end of about an hour-long tour ($7) and after the tasting, the crowd was let loose into what can only be described as a gourmet bazaar and food court. At one end was an enclave selling olive oil body products and candles. Aisles of foodstuff include the farm’s products--tapenade, chocolate, vinegars, and, of course, olive oil—as well as goods from area producers, like pasta sauce, drink mixers, and picked vegetables. Along the periphery of the space, people lined up at food stalls for artisanal coffee, bruschetta, panini, and antipasti, most of which is made from local produce, hormone-free meat, and plenty of olive oil. Schnepf Farm, a fourth-generation-owned family farm, counts peaches as one of its many specialty crops. (Courtesy Visit Mesa)

The largest organic peach orchard in Arizona is on Schnepf Farm. They’ve been growing them on the property since 1960 and today they grow ten varieties. Little wonder, then, that crowds descend here for a weekend each May for the Annual Peach Festival. Actually, crowds appear at this fourth-generation-owned 600-acre farm at different points throughout the year for various reasons: the acres of flowering trees on display each February for the Peach Blossom Celebration; The Pumpkin and Chile Party, a multi-weekend jamboree throughout each October with hayrides, a petting zoo, races, and a ton of other games and rides. There have been years where visitors top 100,000 in October alone. But reasons to spend time here extend far beyond the seasonal occasions. The farm is owned by Mark Schnepf and his wife Carrie. Mark’s grandfather bought the 640 acres for $25/acre in 1941. Framed newspaper clippings and photos of the whole family, from his father showcasing the airplanes he once owned to Mark and Carrie's wedding day, line the wall of what was once the original farmhouse, which his parents built in the 1960s. The property is massive, but the room is a constant reminder of its wholesome soul.

Today, if there isn't a festival, visitors still come en mass for seasonal you-pick-it opportunities. Or you could just spend a quiet afternoon at the the country store-style bakery. Spend an afternoon lingering over a slice of fresh, warm peach pie and tea, then be sure to grab some homemade honeys and jams on your way out.